Why does everyone adore Iris Apfel? “She’s a true original,” said Tommy Hilfiger as he and his wife, Dee, navigated the crush of guests who turned up at Bergdorf Goodman on Thursday evening to celebrate the style icon’s latest projects. Christie Brinkley, Ralph Rucci, Gilles Mendel and Alice & Olivia’s Stacey Bendet also were on hand to pay their respects to Apfel, who at 96 is busier – and more in demand – than some stars one-third her age. 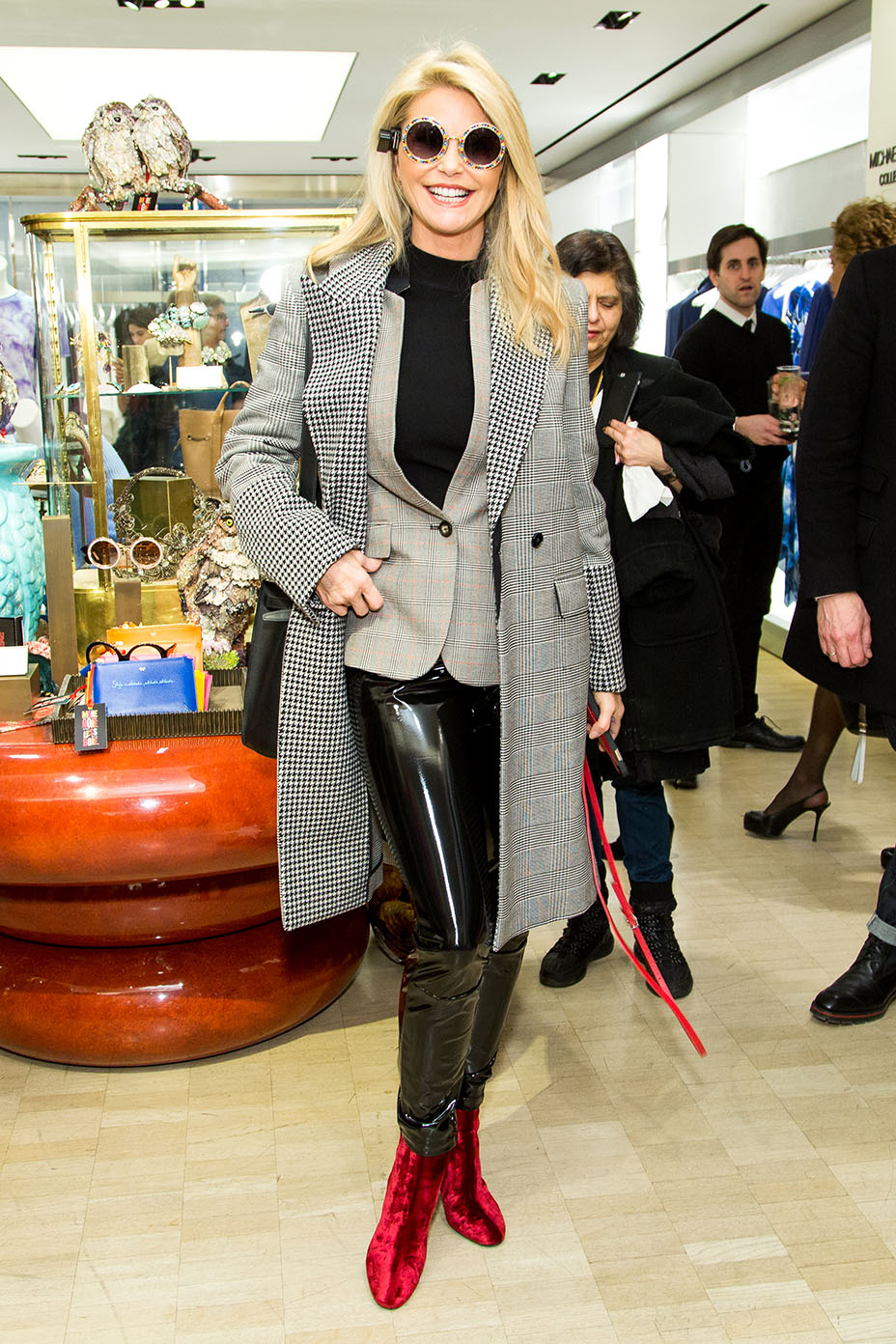 From design projects to appearances in ad campaigns, Apfel shows no signs of slowing, as Thursday’s party more than proved. She’s got a new book, Accidental Icon (Harper Design, $35), and has partnered with Bergdorf Goodman fashion director Linda Fargo to curate a capsule collection of Iris-friendly clothing and accessories. Some pieces, like a Libertine leopard-print trench coat or a tropical-print pajama shirt by Gucci, were gathered from current collections, while other designers lent their talents to create special items – including Alain Mikli’s oversized Iris oval sunglasses and Adrienne Landau’s pink Iris Apfel Chandelle feather coat – for this pop-up event, available through March 26 online and on the third floor of the Fifth Avenue retailer.

“Iris worked me out,” Fargo said of the project. “She concerned herself with every color choice; every single object was vetted and co-curated 100 percent by her. Not a single thing made it to the floor or the windows that didn’t come with the Iris seal of approval.”

Indeed, through March 26, Bergdorf Goodman’s legendary Fifth Avenue windows also are showcasing all things Iris, a bucket-list moment that isn’t lost on her. “I was incredibly flattered,” Apfel said. “And David Hoey [Bergdorf’s senior director of visual presentation] is an absolute genius. I had the good fortune to dress the mannequins and style them, and everything else was left to David. I’m in awe of his talent.” 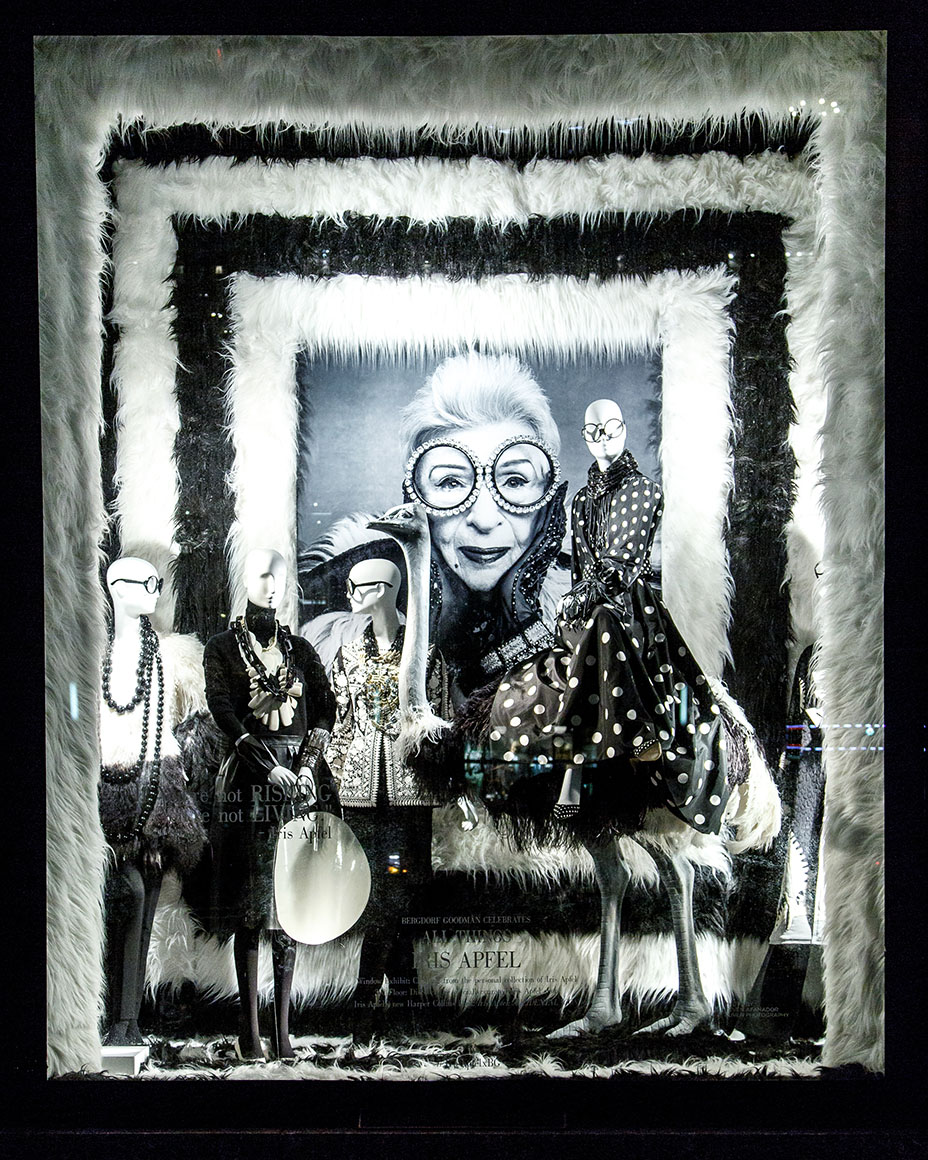 Those Bergdorf windows, dazzling in their mix of color, texture and detail, combine pieces available for sale with items both from Apfel’s own closet and from the Peabody Essex Museum in Salem, Massachusetts, which houses more than 900 pieces from her wardrobe as part of its permanent collection. “When you think of Iris, you think of feathers and fur and color, but she’s also very playful,” Fargo said. “When you go to her apartment, you’re going to find Kermit, you’re going to find plush animals. She’s like the oldest teenager in the world, because she’s absolutely young at heart in every way.” 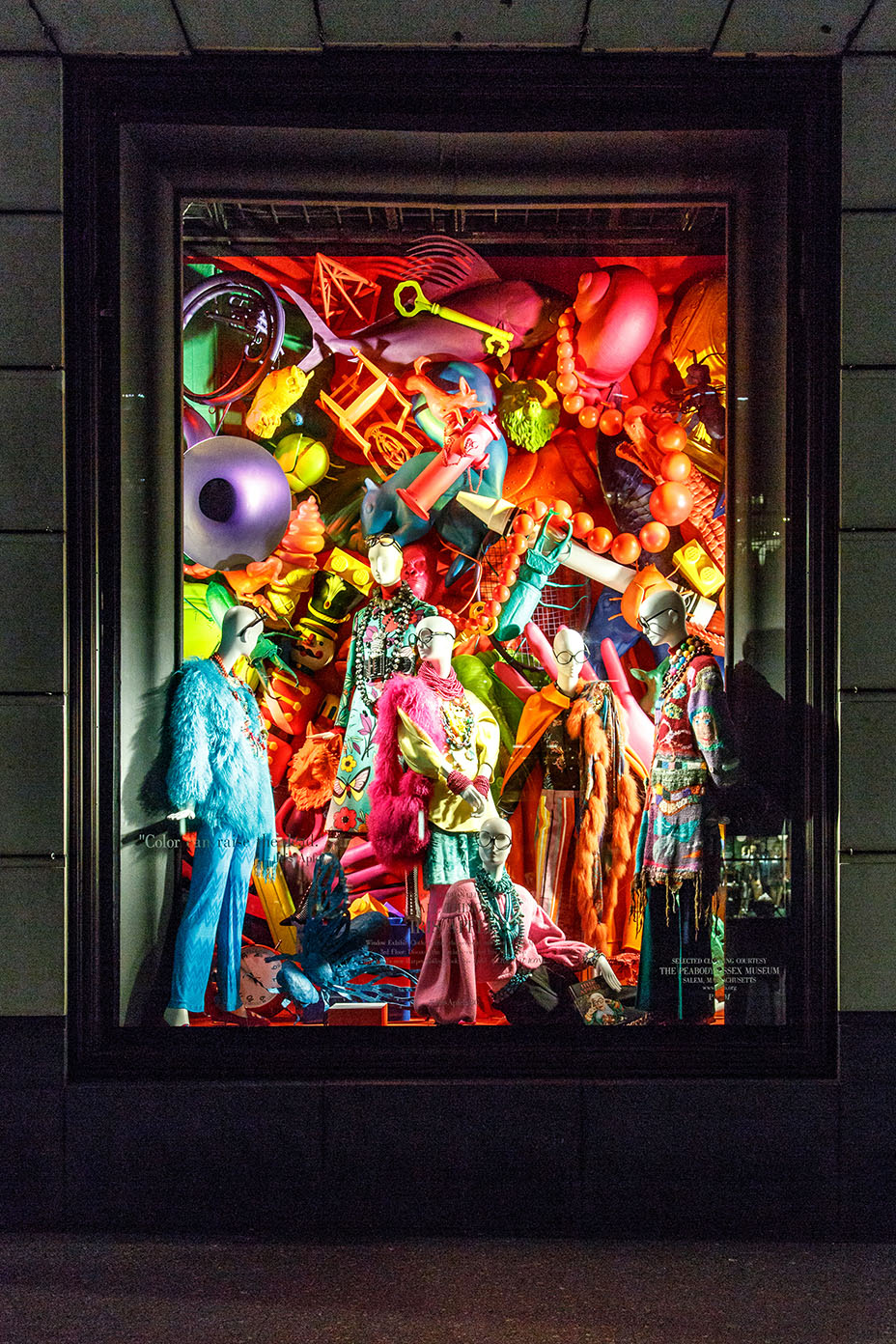 On Thursday night, Apfel was presented with another toy for her collection: a Barbie in her own likeness. The one-off doll (wearing a miniature version of the green Gucci suit Apfel wears on the cover of Accidental Icon) teases yet another project – she has styled ensembles for two Barbie dolls that will be sold this fall. Mattel will cross-promote the dolls on the Home Shopping Network, where Apfel has been selling her “highly styled, very affordable” fashion and home designs for seven years. For HSN, she’ll create adult-sized versions of the outfits seen on the Iris Apfel Barbie dolls. “I thought someone was pulling my leg when [Mattel] called me,” she said. “Never in my life would I imagine that I was going to be a Barbie.” Will the doll for sale look like her? “Oh, I hope not; who wants to play with a Barbie that looks like she’s 96?” 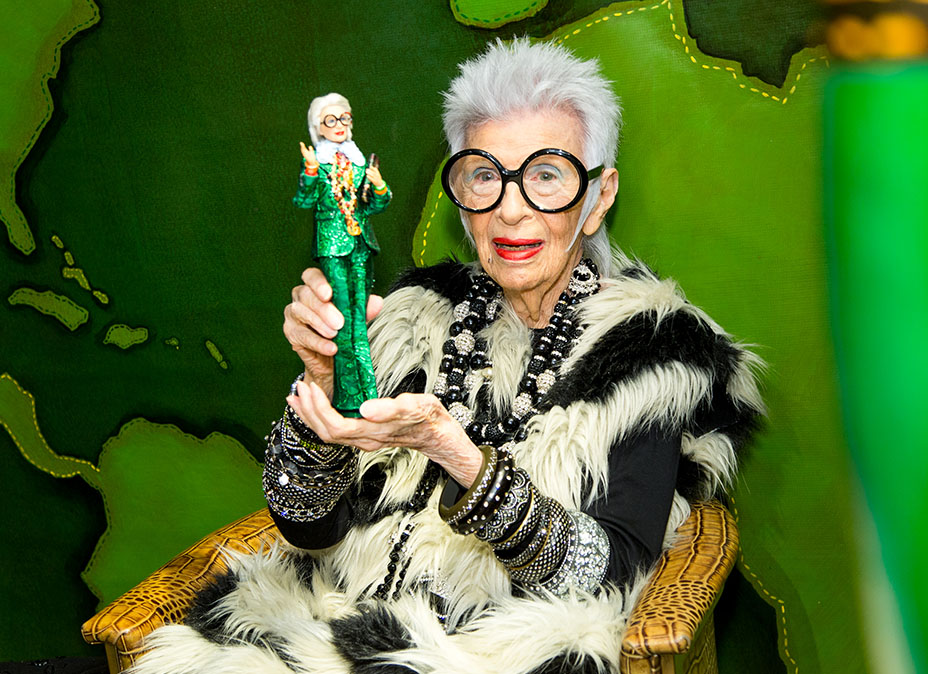 Accidental Icon, meanwhile, was written for readers of any age. “It’s very lighthearted, little essays and stories of the funny things that have happened to me – musings, really,” she said – but don’t ask for a favorite anecdote. “I don’t have a favorite anything. I never answer that question.”

And even amid a seemingly nonstop schedule, Apfel also weighed in on the details of Thursday night’s “Hot Dogs & Martinis” party: “I don’t like loud, intrusive music – it should be piano or soft jazz or Sinatra, something that’s just in the background – and the menu should be real food. I don’t like fancy-schmancy lettuce things at a party.”

Ever the pragmatist, Apfel shrugs off the idea that she’s an inspiration. “I think it’s hysterically funny to become a whole big deal at my tender age. I’m not knocking it; it’s fun,” she said. And at 96, she wouldn’t have it any other way. “I’m busier than ever. But that’s OK; to me, retirement is a fate worse than death.”