J Balvin proved his people are watch people as he flashed major wristwear and blazed a trail through Las Vegas all week in celebration of the 2017 Latin Grammys.

Balvin, a TAG Heuer Brand Ambassador, attended the Wednesday opening of the watchmaker’s newest store — its 10th in the U.S. — at The Forum Shops at Caesars. The Colombian reggaeton god, whose hit “Mi Gente” reached No. 1 on Spotify, became the most Shazamed song worldwide and the video for which has reached over one billion views on YouTube, expressed his true self by sporting glow-in-the-dark yellow hair, an Umbro tracksuit, multicolored Nikes and a unique timepiece that TAG created for the event.

“I love the vibe of Las Vegas,” Balvin says, “and since I was a kid a TAG Heuer was something that I really wanted to have. When I grew up, everybody was talking about TAG, TAG, TAG, TAG and that was one of my first [watches].”

The singer, who owns three TAG Heuers, showed off his limited-edition Carrera Calibre Heuer 0, which he described as “having a casino vibe.” The dial features 64 black diamonds and a roulette wheel which alternates black, red and green sections along the perimeter. The alligator-printed rubber and leather straps are black with red stitching as a nod to the card game blackjack. Nine of these special pieces ($9900) exist, each numbered X OF 7, beginning with 0 and 00 and continuing through 7 to keep the roulette vibes going. There is a second version with a ceramic bezel ($6200) for those who want less flash — it will be produced in a quantity of 77, as that’s everyone’s lucky number.

“J is number one, which means he’s pushing the boundaries,” says Kilian Muller, president and CEO of TAG Heuer North America. (Other brand ambassadors include Tom Brady, Ronaldo, Bella Hadid and Chris Hemsworth.) “J is very innovative and very creative and I think those are all values which go very well with our brand. So it makes a lot of sense to associate ourselves with the best. [He also allows] us to talk to the [Millennial] generation.”

Of his distinct personal style, which ranges from bright, whimsical urban streetwear to tailored tuxes and suits, Balvin says he does it all to make life more fun. “I enjoy everything I do from music to fashion or to watches — the lifestyle,” he says. “I just enjoy. And try always to come up with something fresh and different.” Other than his watch, the self-described accessory lover can’t leave the house without all other types of adornments, too. “Glasses, earrings, rings, sneakers. I love every little accessory. I like track suits and sometimes to be suited up. I like to be like a chameleon.”

He also hopes his fans take a cue from his expressed individualism. “I [want to] inspire people to be themselves,” he says, “if you’re gay, be proud to be gay. If you are brown, embrace it and feel comfortable with it. That’s the message that I’m sending.” All things he says he learned from his style icon, Pharrell Williams. 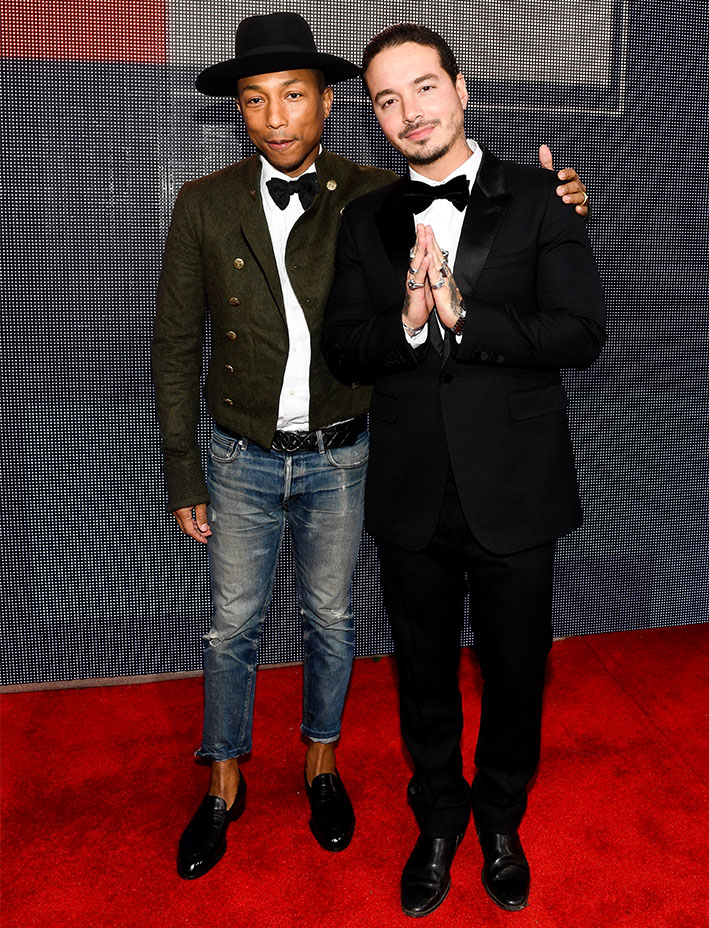 “When your idol becomes your friend, it is beautiful,” Balvin says. “He has taught me a lot about fashion, style, culture and art. That’s what I want to bring to the world as Latinos — I want to create something for the world.”

“Mi Gente” — and its remix featuring Beyonce — has done just that. It has captivated the world — all while not losing its Latin roots. “I see messages from everywhere — China, we see videos from nightclubs, Egypt, Paris. It’s just beautiful. People are really feeling the vibe and the glow.

“It’s about love for my people. No discrimination. It’s all about uniting, being together. The sound is so special and the melodies make you move and dance even if you don’t understand it. Plus, the video helps too. [Even if they don’t know what the song says] when they start watching the video, it’s like wow, I like what I see.”

And as we enter the gift-giving season, the global superstar and retail lover’s greatest wish is one that has nothing to do with consumerism. “Peace starts in the way we behave,” he says. “I wish for love and tolerance. That’s it.”