Jacob Arabo is known for creating over-the-top timepieces, dazzling in their detail and never skimping on the “wow” factor. But for the latest in his Opera collection, a series that blends the Swiss mechanical crafts of watchmaking and music boxes, Arabo felt something was missing. Then he realized the problem was the song: “I wanted to put something iconic in this watch, and The Godfather came to mind,” says the man behind the New York-based luxury watch and jewelry brand known as Jacob & Co.

Nino Rota’s Golden Globe-winning score is instantly familiar, and Arabo liked the idea of paying tribute to Francis Ford Coppola’s Oscar-winning 1972 film and its music. That’s how the Opera Godfather watch was born, though its path to get into collectors’ hands hasn’t been easy, primarily because the watch needed to be vetted by Paramount Pictures, which owns the rights to The Godfather and its score.

“Once I had the idea, I thought, ‘Let me try to contact Paramount Pictures, and let’s see what they say,'” Arabo recalls. “They did the research and their due diligence, and ultimately they liked the idea and gave me the license.” That process took almost one year to complete — the watch originally was shown at the Baselworld Swiss watch fair in March 2018, before the rights had been secured — and Arabo adds that the agreement includes “a financial arrangement that works for both companies.” 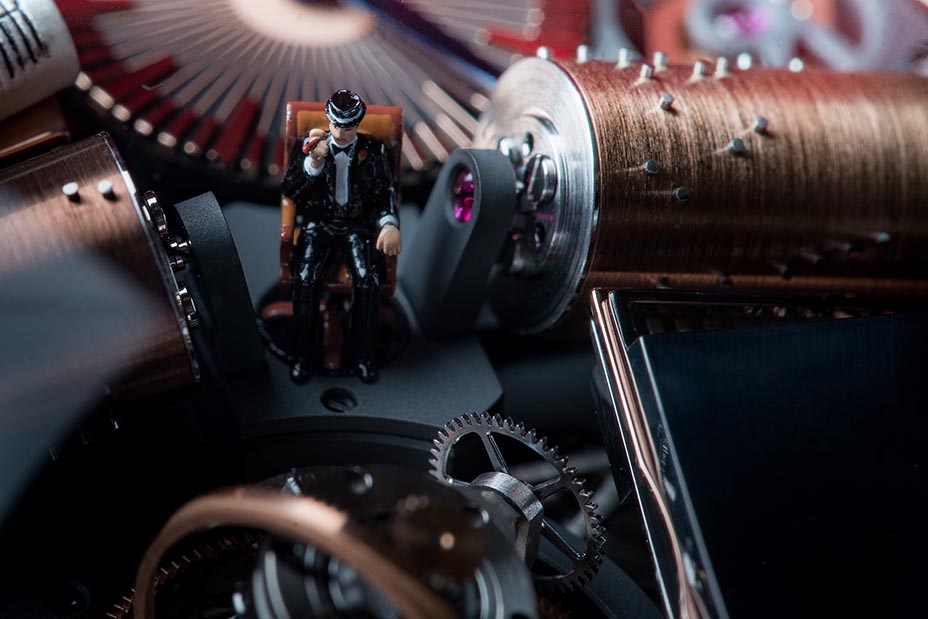 With the official licensing comes the addition that was revealed at the most recent Baselworld fair late last month: the inclusion of The Godfather logo. Arabo believes that  both the logo and 120 notes of Rota’s iconic score, played with the press of a pusher at the 2 o’clock position on the case, were well worth the effort. “Beautiful pieces take time, and I got exactly the watch I wanted,” he says.

The Opera Godfather comes in a 47mm case crafted of a domed sapphire crystal with sides framed by 18-carat rose gold or titanium, the large size allowing for the placement of two barrels specially crafted to reproduce the music. “The barrels were probably the hardest part, because they had to play together at just the right speed so you would recognize the music,” Arabo explains. Also, one has to look closely at the piano placed above one barrel at the 10 o’clock position to notice that its keys are moving in time with the music. Below the gold-appliqued dial at 12 o’clock, a miniature hand-painted statue of Mario Puzo’s best-known character sits in the center of the case, just above a triple-axis tourbillon.

Pricing on the Opera Godfather watches range from approximately $330,000 for the titanium version to $360,000 for the rose gold; each style is limited to 88 pieces. “We can only make five movements a month for this watch, so some collectors will be waiting five, six or seven months to receive it,” Arabo says, noting the likelihood that both models will sell out quickly. “It’s too bad, I’d like to have one for myself,” he adds.

The process also has led to thoughts about future watches that will honor other films and their own iconic music. But for now, Arabo feels confident with his choice for this timepiece. “You know, last year I went to Rome, and I walked into one of the most famous churches in the city,” he recalls. “And in the middle of this beautiful cathedral, what did I hear playing? The music from The Godfather. I couldn’t believe it. But it also proves that it’s a good choice. The music is beautiful, and it’s recognizable everywhere in the world.”

In the Opera Godfather, two drums rotate with a finely calculated tempo, playing the Godfather’s iconic theme music — on demand, once the fully mechanical musical complication has been started by the wearer.