Jaden Smith has been busy, from releasing his sophomore album, Erys, to celebrating his 21st birthday by serving free vegan meals on Skid Row last month. For the latest drop of his lifestyle label and art collective, MSFTSrep, the multihyphenate son of Will Smith and Jada Pinkett Smith has teamed with the stylish sock brand Stance for a six-month pop-up shop on La Brea Boulevard, next door to American Rag Cie.

The musician/actor/designer/fashion wunderkind teased the Stance x Jaden Smith boutique’s address on Instagram Stories on Thursday, Aug. 29. Soon after, he rolled up in a hot pink Tesla Model X and greeted a line of eager fans (he boasts over 13 million followers on Instagram alone) who were waiting to get their hands on MSFTSrep’s new “Trippy Summer” fashion line, comprising oversize T-shirts, hoodies, swim trunks and bright yellow caps ($30 to $70) bearing psychedelic logos.

The Best Hollywood-Inspired Gifts for Kids

While Smith performed back-to-back Coachella weekends earlier this spring, his latest range was inspired by another legendary music festival. “Coming off the 50th anniversary of Woodstock, this collection is all about rock and roll in the ’60s and ’70s: The Beatles, Jimi Hendrix, the Grateful Dead. [That era] has really been my style right now: colorfulness, tie-dye, and just free-spirit ‘flower power’ type of vibes,” Smith tells The Hollywood Reporter. 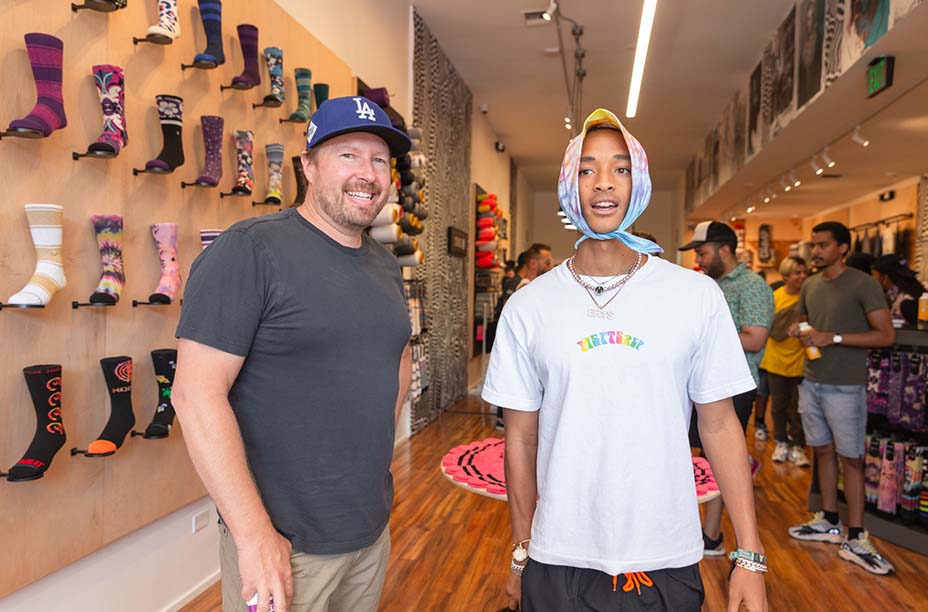 The Skate Kitchen star co-founded MSFTSrep (short for MSFTS republic) with younger sister, Willow Smith, in 2013. The collective now includes musician Harry Hudson and has a record label imprint under Roc Nation. The brand’s latest streetwear line is exclusively stocked in the AstroTurf-covered back corner of the shop, which features bright pink Stance socks hand-picked by Smith. “Those are some of my favorite Stance socks. I just love the color pink and that’s like the perfect hue,” he says.

As far as the rest of the 1,500-square-foot space, the majority of the shop offers a selection of Stance’s women’s, men’s and kids socks in the label’s signature playful patterns and solid colors ($10 and up), including collaborations with the NBA (Stance was previously its on-court sock), MLB, Kid Cudi and Disney. Also on offer are women’s and men’s tees, underwear and accessories, such as boxers and shirts in the brand’s sustainable Butter Blend fabric. Stars such as Jay-Z, Drake and Justin Bieber have stepped out in Stance and Rihanna was previously a contributing creative director for the brand. 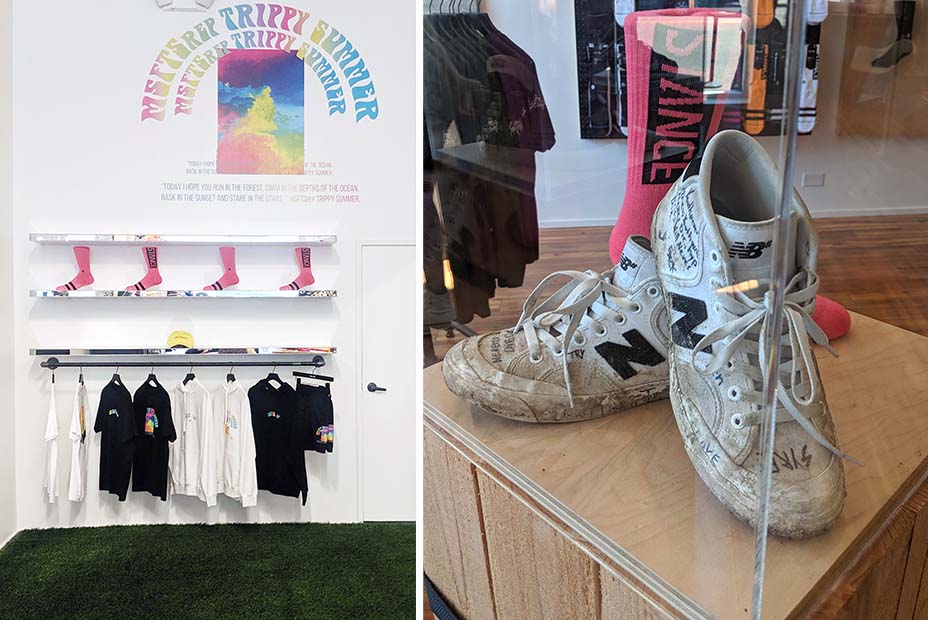 Rounding out the hipster shop are installations by L.A. street artists Mister Cartoon and Estevan Oriol, a Supreme pinball machine and a sneaker display showcasing Vans x Disney shoes and the beat-up white New Balance sneakers that Smith wore in his “Icon” music video. (Smith is a brand ambassador for New Balance and starred in its recent “Runs in the Family” campaign.) There’s also a fridge stocked with complimentary Just Water, the environmentally and socially conscious water brand that Smith co-founded.

Although the brick-and-mortar collaboration went from concept to fruition within the last two weeks, Stance and Smith go way back — starting in 2011 when the hip-hop artist’s father was among the backers who invested $6 million during the label’s Series A funding. (Roc Nation, Universal Media Group and Dwayne Wade were also among those first-round investors.)

“I can’t even remember how it happened or how we first met, but I remember having a conversation with [Hollywood producers] Miguel [Melendez] and James Lassiter, who’ve worked with Will for a long time,” says Kearl. “After the first couple of meetings, it was like we saw the world the same way. It was just like, ‘Wow, this feels natural and easy. We’re like birds of a feather.'” 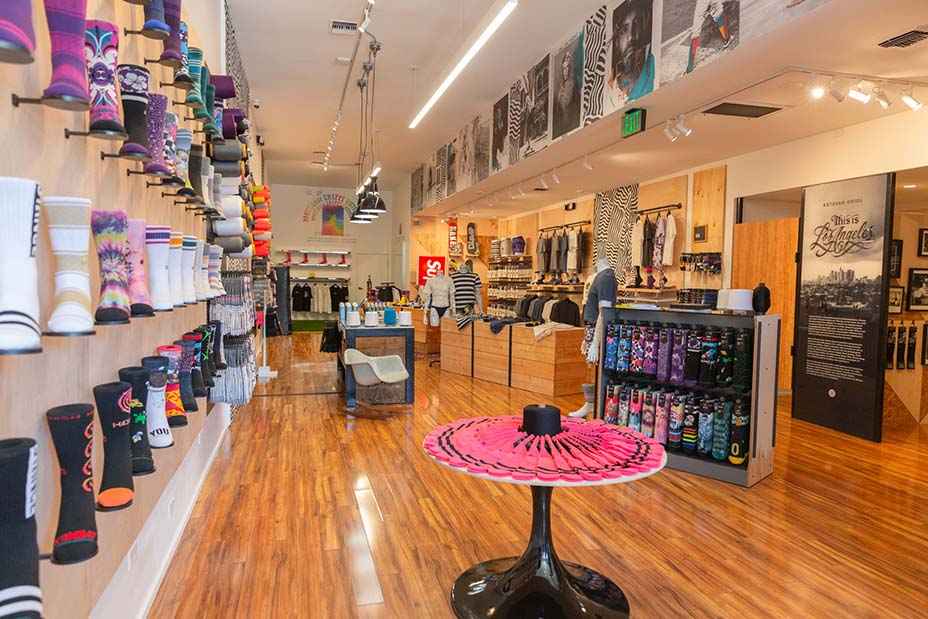 Stance’s history of teaming with the Smiths includes the previous release of a five-pair Fresh Prince of Bel-Air collection and tapping Willow Smith to design exclusive socks.

“My family has been a part of Stance for a long time,” says Smith. “Jeff had actually been one of the first investors in Just [Water].”

There’s potentially more in store from Smith and Stance. While sporting Stance socks that he personally tie-dyed blue and purple, the 21-year-old designer teased that his DIY project is “something custom that we’ve been trying to test, so a little something-something [might be] happening.”

Beyond his fashion and music ventures, Smith confirmed that he will continue to bring his I Love You Restaurant food truck to Skid Row, although upcoming pop-up dates are still in the works. 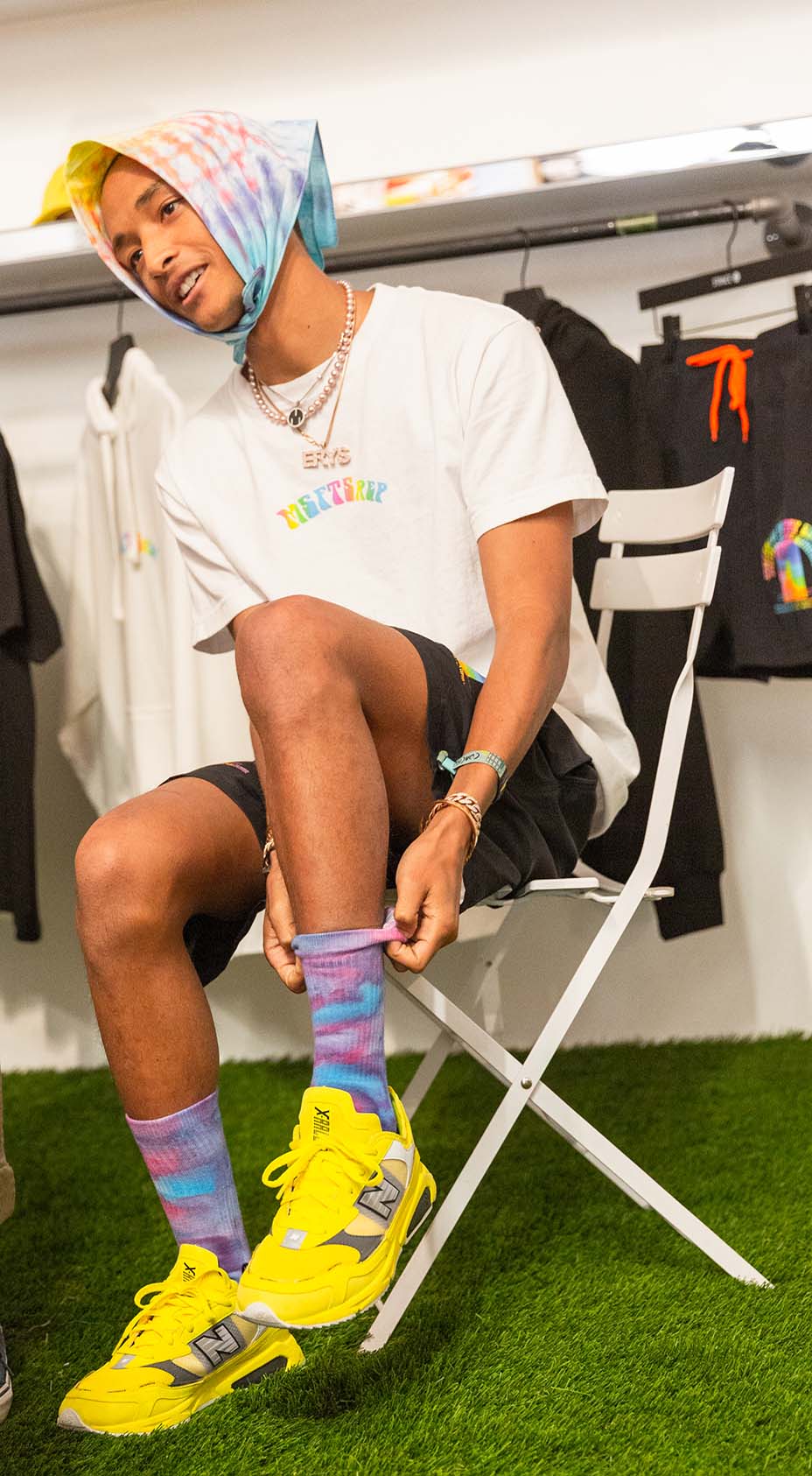 “More importantly, [it’s about] being more than the product that you sell; the awareness about sustainability, that’s the real thing that we’re trying to get people to care about [with Just]. Even with the I Love You food truck, it’s about pushing the awareness of what’s going on in Skid Row,” he says.

“The store wasn’t so much about selling merch or a product as it was [about drawing] more attention to these big ideas of homelessness and sustainability,” says Kearl. “If we can put a pop-up in place that causes people in L.A. [to see] an example of a young person who’s making a big difference in the world, and if we as a brand can help propel that forward, then we’ve done something good.”