Surprise performances at splashy opening-night parties are rarely kept completely under wraps — there’s always a hint dropped either on social media or via an eager PR person. But even when Will Smith stopped in briefly to help christen Louis Vuitton’s new Place Vendome flagship Monday night, it’s safe to say no one expected him to take the stage with former partner DJ Jazzy Jeff a few hours later.

#LVParis Will and Jaden Smith performing at the opening of the newest #LouisVuitton Maison at Place Vendome. See more now on Instagram Stories.

It was Jaden Smith (dressed head-to-toe in Louis Vuitton, natch) who kicked off the concert — his very first onstage performance, his dad said after he walked out onstage with Jazzy Jeff. It’s a sure bet the crowd would have been happy with Jaden alone, but when the surprise was revealed, that the 19-year-old was actually the opening act for his father, the audience’s enthusiasm kicked into overdrive. After all, while Smith and Jazzy Jeff have been reuniting for select events, including the UK’s Livewire Festival in August, the chance to catch the beloved duo performing their ‘90s hits — and they were all here tonight, from “Gettin’ Jiggy Wit It” to “Summertime” and “Miami” — is still an undeniably special moment. 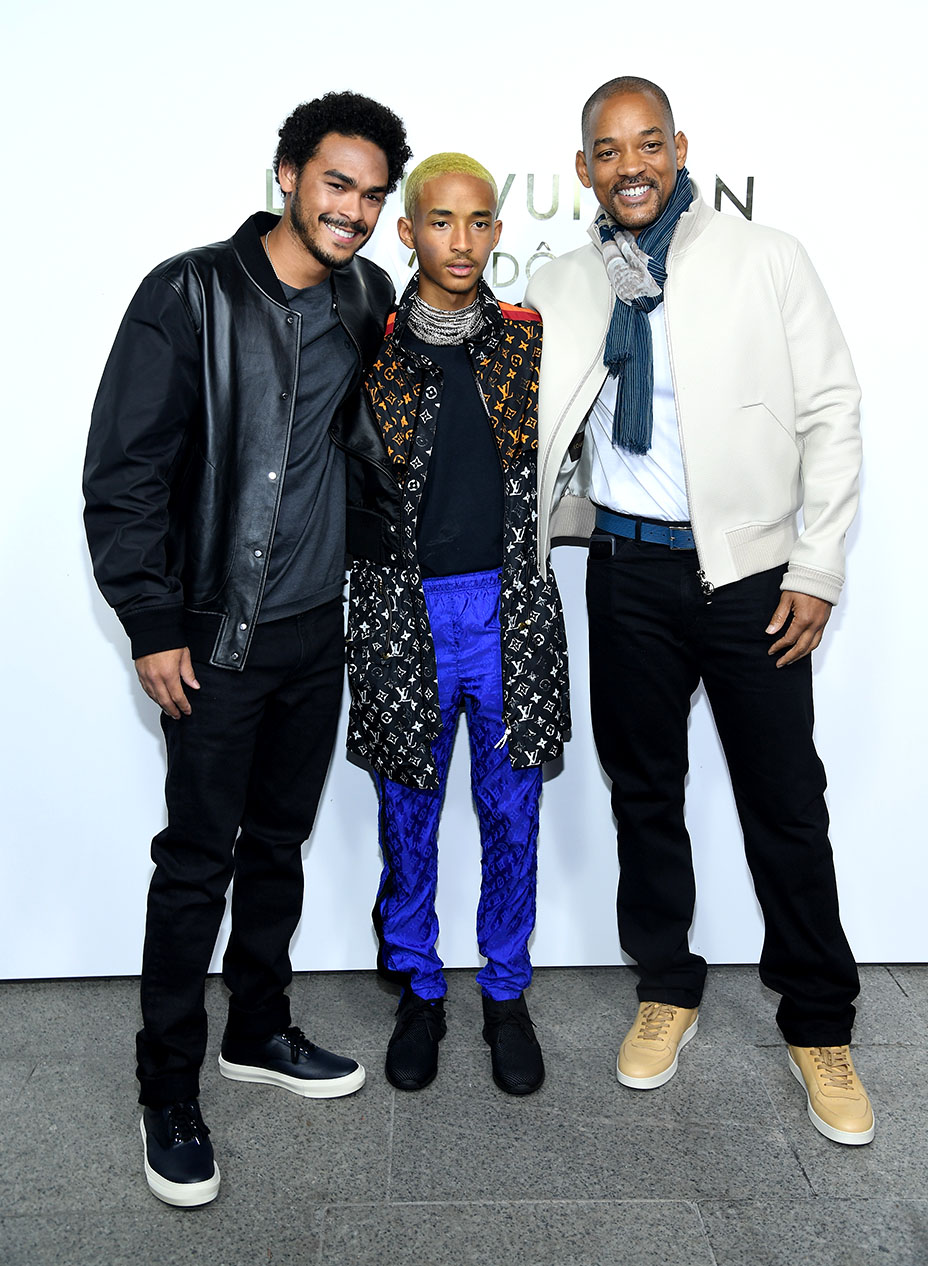 Smith also seemed to be having a great time onstage, taking smartphones from those at the front of the stage and posing for selfies between songs — “She just looked at me like, ‘You better take a picture with me,’” he joked at one point as he accepted a phone from one reveler. The former Fresh Prince also brought out his two sons — Jaden and 24-year-old Trey, by Smith’s first wife, Sheree Zampino — to perform “Just the Two of Us.” That song was inspired, Smith noted, by the night Trey was born. “I wrote this right after we got home — for the first time in my life I had a baby, and it was crazy,” he said

The surprise concert was just one example of the French label’s efforts to debut the Place Vendome flagship in high-wattage style. For most of the invitees, the evening kicked off with cocktails at the four-story boutique before heading to a special-event space across Place Vendome for the concert and afterparty. VIPs like Smith, meanwhile, joined Cate Blanchett, Michelle Williams, Catherine Deneuve, Marion Cotillard, Paul Bettany and others for a private dinner at the Ritz before making the short trek across the iconic Parisian square.

All that star power — and the crush of the crowd at the cocktail party — might have overshadowed just how special this new boutique is, but Vuitton execs thoughtfully brought in press and select clients to see the space before it was teeming with people. You’ll find plenty of celeb-friendly details in the four-story flagship, including two working ateliers: “Rare & Exceptional” on the top floor is home to nine artisans, who will craft gowns and other bespoke pieces for events and red carpets. On the second floor you’ll find the Appartement, where celebs and clients can view collections in private. And high jewelry is not only featured here in an expansive space on the street level — they’re able to stretch out from their previously cozy boutique across Place Vendome — but the high-jewelry artisans are crafting these dazzling pieces right upstairs. 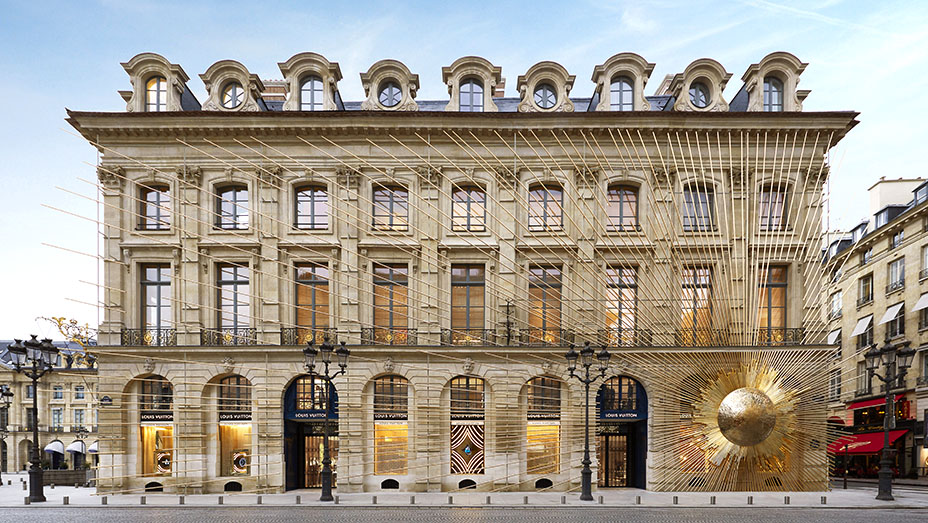 Peter Marino designed this new flagship, the result of combining two long-closed hotel particulars, and he looked to another Louis for inspiration. In the foyer stands a life-size statue of Louis XIV, all in gilt splendor as the Sun King, while a massive golden sun with spiky rays adorns the building’s facade, and as of Monday, was already outshining the nearby Ritz as the must spot for selfies. (Its upkeep will be interesting to watch, however: Hours before the party Monday, a worker could be seen touching up the tube-like rays with gold spray paint.) While the opening-night party took place Monday evening, the flagship opens to the public Thursday, Oct. 5.

“The Place Vendome facades were created for Louis XIV and are marvelously Baroque, but they were stage sets for the king,” Marino noted. A well-known art lover, Marino offset those golden details with 32 contemporary works by artists across six continents, including Stephen Sprouse and Yan Pei Ming. And, of course, this being Louis Vuitton, a pair of historic trunks is also worth checking out: a Library Trunk designed by Gaston-Louis Vuitton for his personal use, and a 1912 steamer trunk recently added to the house’s archives. 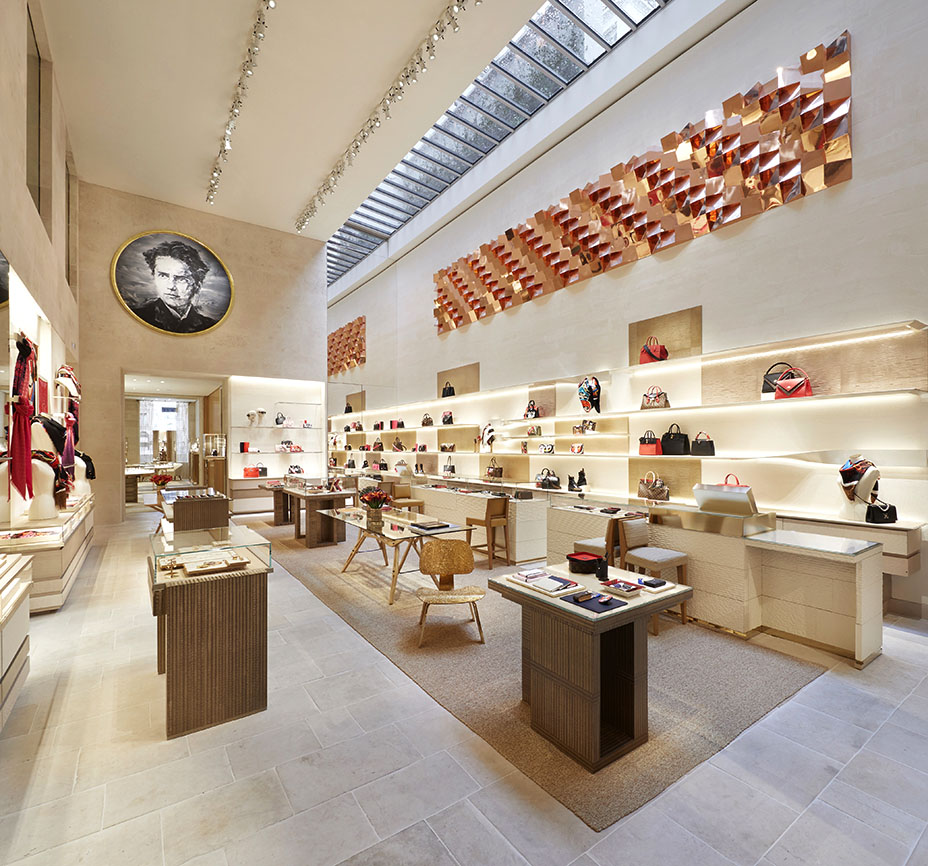 These details might have been enough for such a high-profile opening, but add in Will Smith and DJ Jazzy Jeff? Now that’s a night to remember. “We’ve got a really international crowd here tonight, I love it,” he said, surveying the standing-room-only audience — which, indeed, had flown in from the U.S., Asia and many points beyond for the event. “This is the rainbow, this is the love the world is supposed to be bringing right now. Let’s have some fun tonight.” 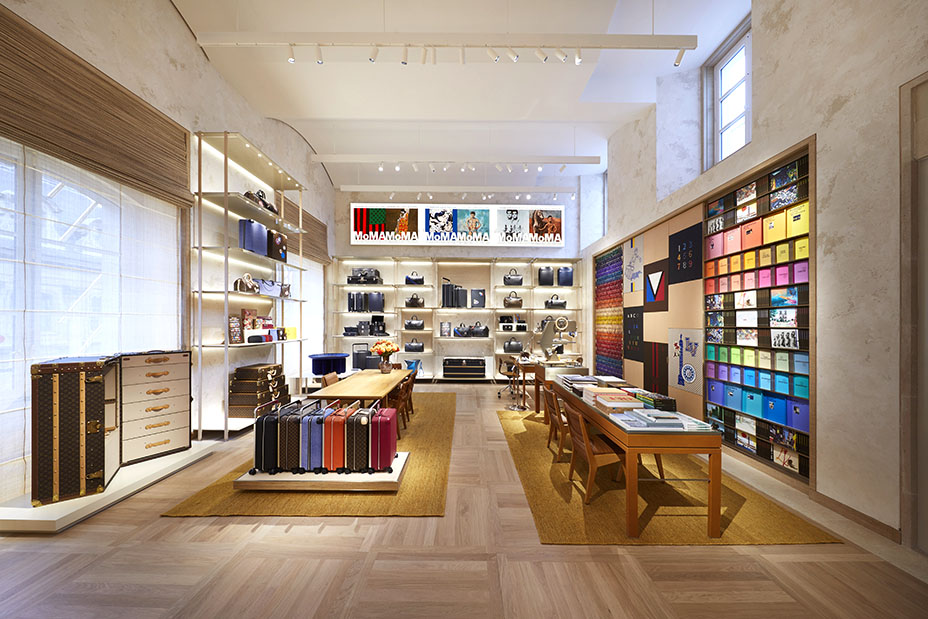