After a lifetime spent in Southern California, the late designer James Galanos came home, at least in spirit, to his birthplace of Philadelphia with the opening Thursday of the exhibition James Galanos: Design Integrity at the city’s Drexel University.

Most remembered for dressing his numero-uno California client and first lady Nancy Reagan, from her days as an young actress in 1960s Hollywood all the way through her White House years in the 1980s (and her West Coast social circle including Betsy Bloomingdale and Leonore Annenberg as well), the designer was also a favorite of stars like Rosalind Russell, Marilyn Monroe and Diana Ross in their heydays. Not to mention fashion editors from Vreeland to Mirabella and other East Coast clotheshorses like the Irises, Cantor and Apfel.

The exhibition stems from a bequest from the James G. Galanos Foundation upon the designer’s death in 2016 that comprises nearly 700 couture-level ensembles dating from the 1960s to his retirement in 1998. Along with a collection of sketches, photographs and press materials, the material makes up a new archive established in the designer’s name as part of the university’s Robert and Penny Fox Historic Costume Collection (FHCC) of the Westphal College of Media Arts and Design.

“The thing that’s so great about the gift is that it gives the Drexel students the chance to see all this beautiful clothing and how it was made on the inside,” says Cameron Silver, fashion historian and owner of L.A.’s vintage institution Decades, who was among the guests at the opening, joining the couturier’s family members and designer and Galanos intimate Ralph Rucci, who called his friend a “national treasure” in brief opening remarks. 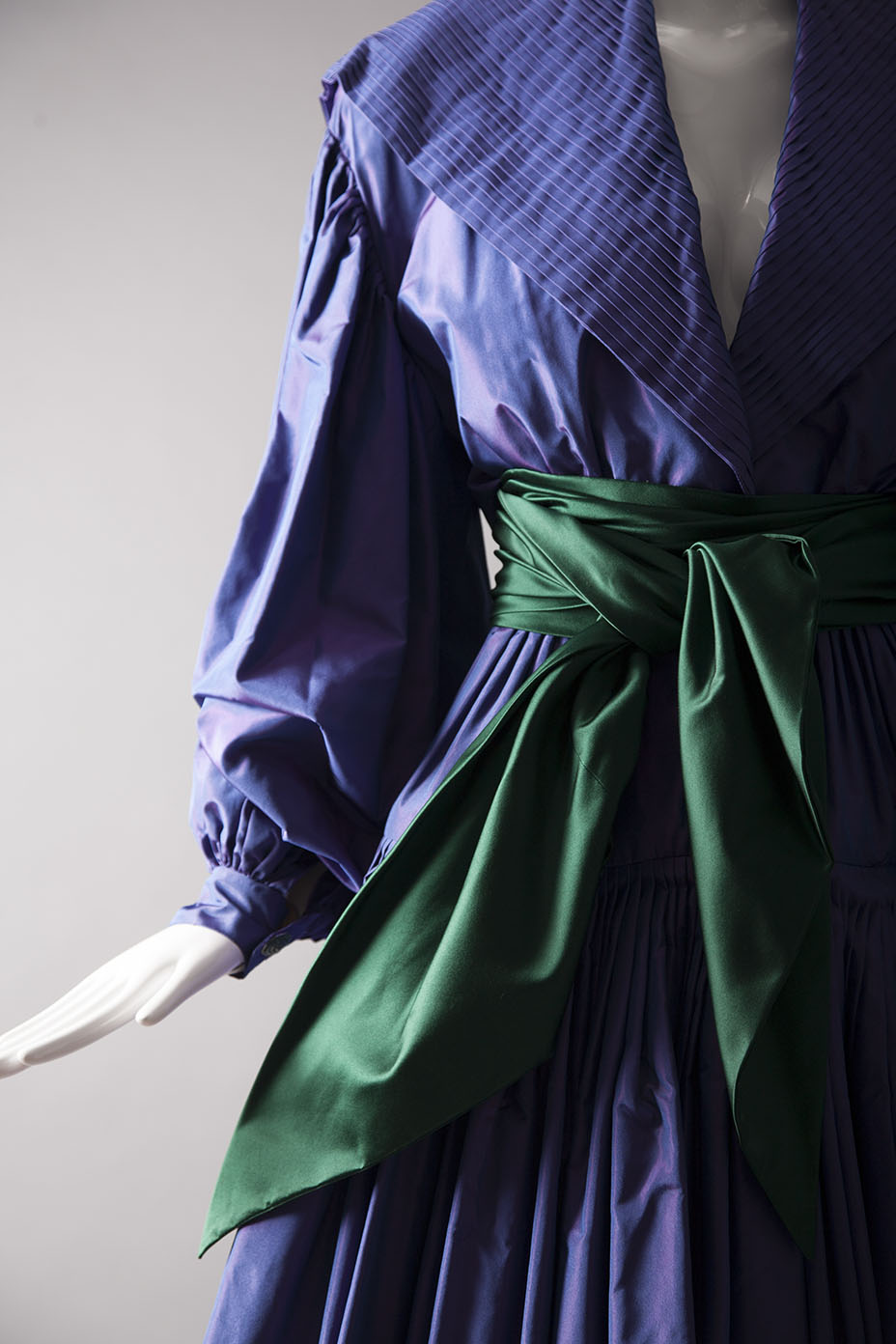 Galanos’ career spanned five decades and earned countless accolades, and the exhibition provides a historical survey of 60-plus ensembles culled from the university’s holdings, beginning with an unadorned black cocktail dress with a full skirt from 1952 that could easily still be worn today. That ageless quality is perhaps most evident in one of the designer’s most iconic gowns, an argyle sheath with the pattern completely rendered in embroidered sequins and beads. 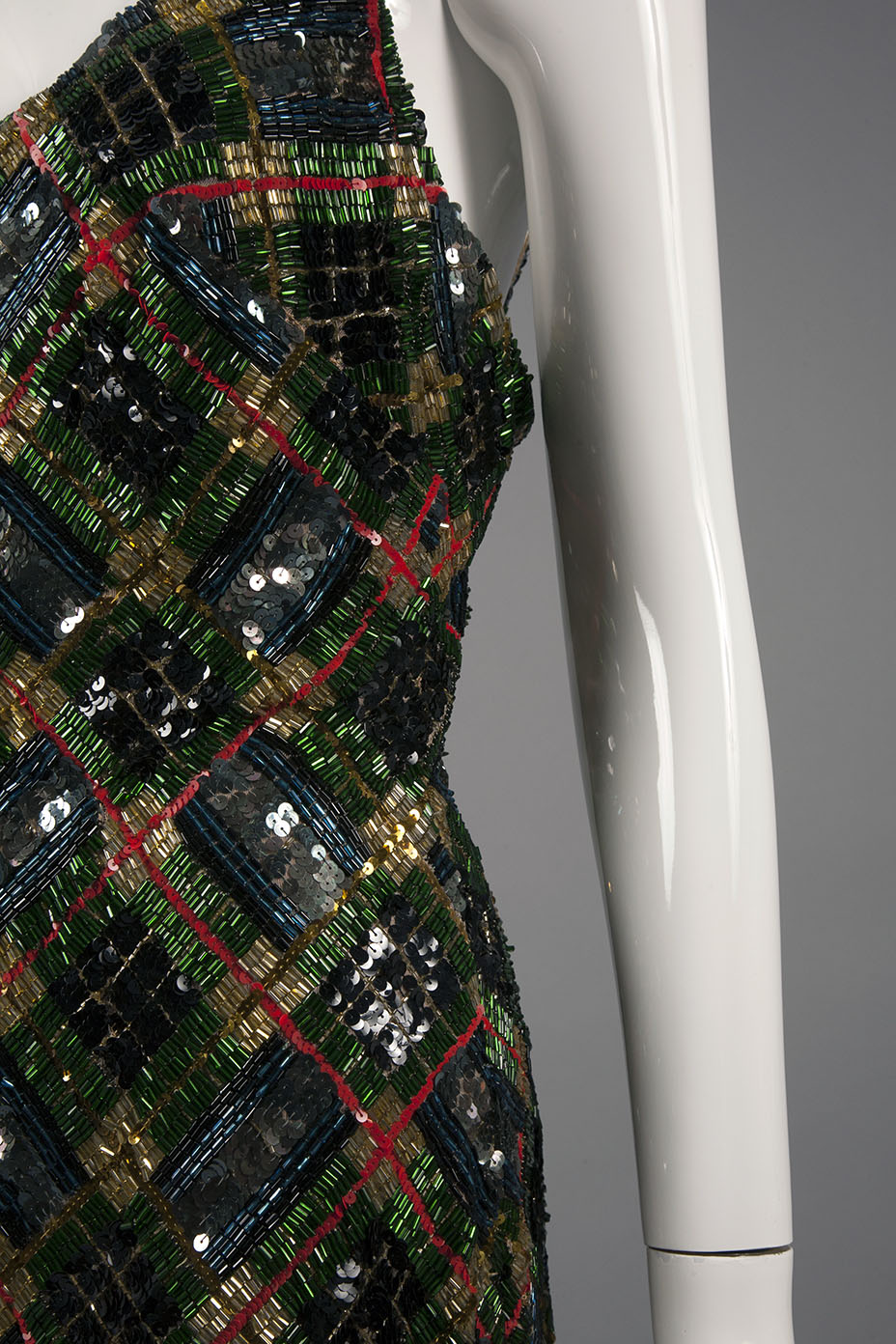 “It’s one of the things I most love because it’s so timeless, says FHCC director and chief curator Clare Sauro at a morning preview before the opening. “It’s so ‘90s yet it’s so ’70’s. Nobody believes me when I say it is from 1957.”

Galanos was most famous for designing both of Nancy Reagan’s inaugural gowns and there are echoes of her second-term choice in the exhibition’s bronzy bamboo-print long-sleeve gown with the beading to emphasize the exaggerated 80’s shoulder. 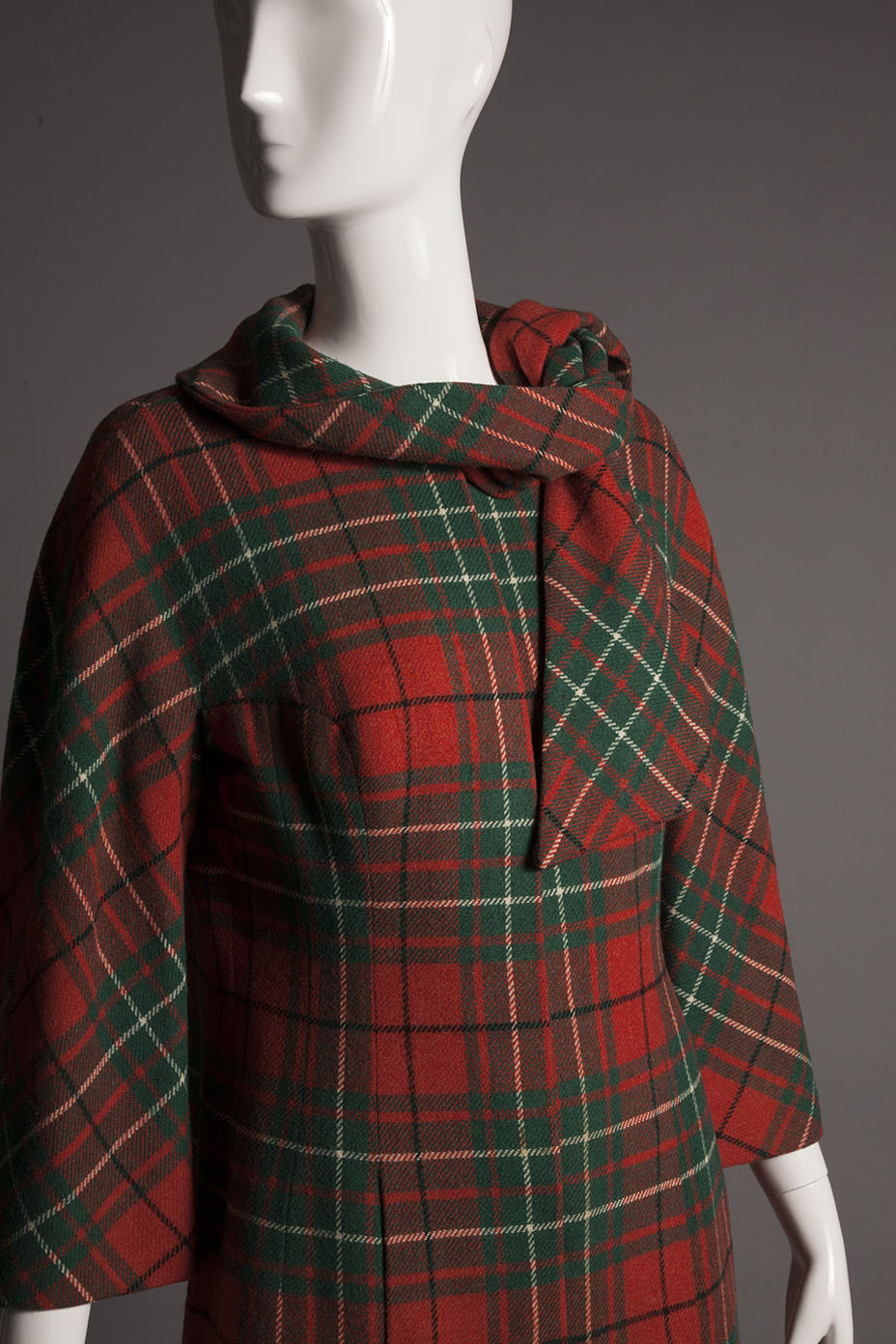 Mrs. Reagan loved her second inaugural gown so much — all in white and encrusted head-to-toe — she re-wore it a second time to the state dinner for Prince Charles where John Travolta gave Princess Diana a memorable twirl. There is also a green-silk-draped gown that narrows to a hobble skirt, a twin of the Reagan-red version the late first lady wore for her official portrait.

Another grouping includes an explosion of colorful dresses in sheer chiffon and silks in the designers favored range of vivid greens, deep plums and Chinese yellow shades. One gown particularly catches the eye, with a jungle print bodice overlaid with beading and a sheer draped double-layered skirt consisting of two different lengths of polka dotted chiffon, one green, one yellow. 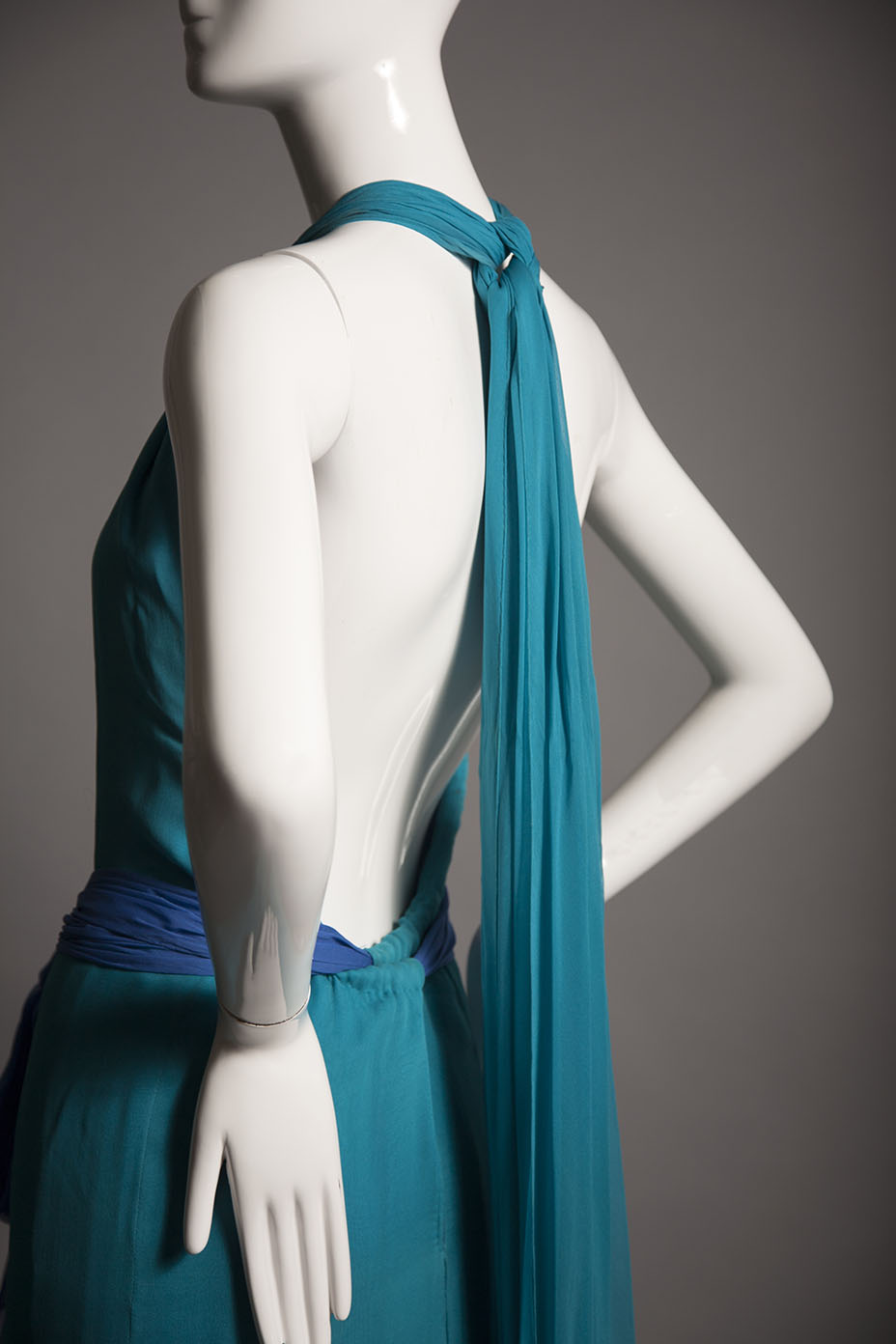 Hollywood is represented in a brown-tweed suit from the fifties from Rosalind Russell with a portrait collar and empire-effect belt with trapunto stitching and in a violet-jacketed gown similar to one that Diana Ross wore to the Academy Awards. And in a group of black dresses, there is a 1993 mini with a sheer midriff, a motif the designer returned to again and again, all the way back to a black sheath with chiffon inset worn by Marilyn Monroe at her 1956 press conference for The Prince and the Showgirl, as shown in the exhibition catalog. 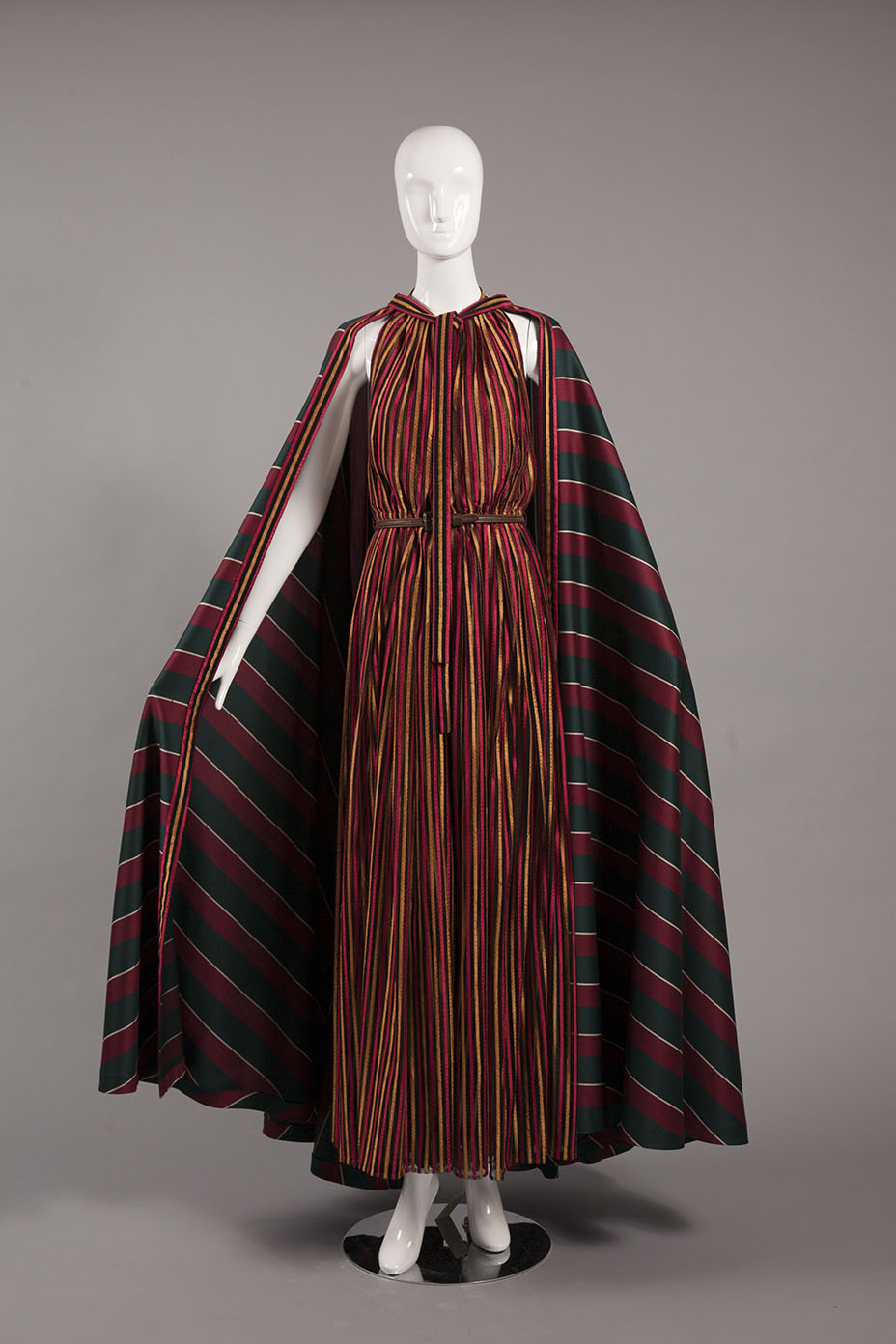 One surprise that strikes a particularly timely note is the designer’s penchant for jumpsuits. There’s a satin jumpsuit with a cropped wool jacket and a cranberry minidress that actually turns out to be a romper upon closer inspection. Despite his gentlemanly demeanor, the designer, who once put Mrs. Reagan in knickers for a state visit to France, also liked the short-shorts of the ‘70s, revealed under a button-front bouffant ball skirt.

“We wanted to show the jumpsuits and the hot pants,” Sauro says. “There’s a whole generation that doesn’t know who he is and another group that thinks of him as just frumpy old-lady clothes. There will be throngs of 19-year-olds coming through and we want them to look at him with fresh eyes.”