Christian Louboutin knew there was only one venue in Paris for his retrospective, “Exhibition[niste],” which opens to the public on Wednesday at the Palais de la Porte Dorée and runs through July 26. “It’s a childhood place for me — I used to go there all the time when I was a kid,” explains the famed shoe designer. “Over the years other places in Paris had been proposed, but nothing spoke to me. But when this idea came up, suddenly it all fell into place.”

A splashy VIP party Monday night drew Janelle Monáe, Charlotte Rampling, Monica Bellucci, Juliette Binoche and others to the former museum in the city’s 12th arrondissement, where roughly 400 of Louboutin’s designs are surrounded by collaborations with a variety of contemporary artists. Among the displays is a section devoted to Louboutin’s work for entertainers, dubbed “The Pop Corridor,” featuring designs and images of shoes worn on the red carpet and in film and music performances, including Tina Turner and a made-to-order shoe Louboutin created for Dolly Parton. 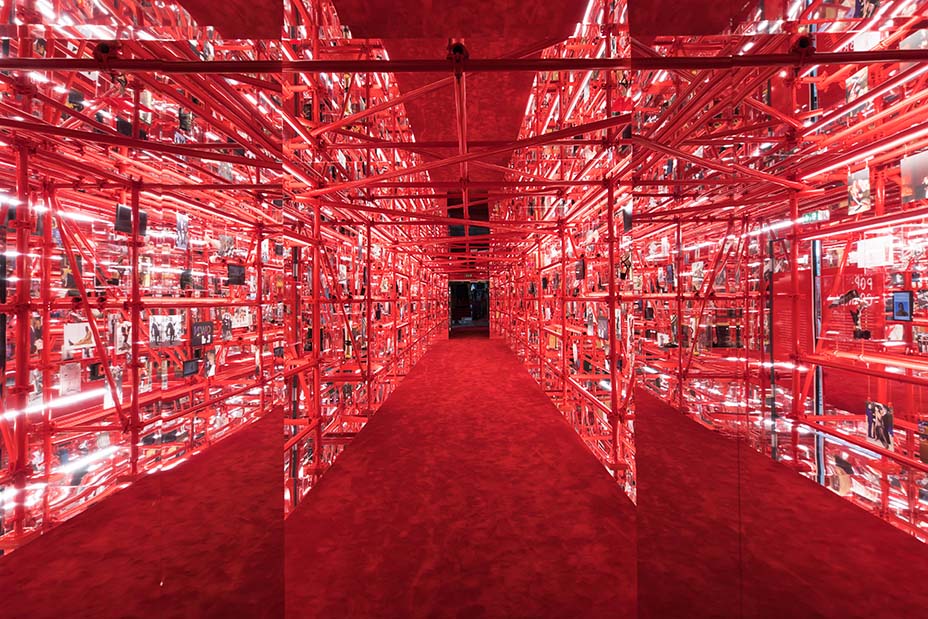 “I’ve worn Louboutins to so many of my most memorable red carpet moments,” Monáe tells The Hollywood Reporter. “For the past two years at the Met Ball, I’ve worn my favorite silhouette of his, the platform wedge. I love that, even with as bold a look as [our collaboration with] Christian Siriano, a shoe designed by Louboutin is still a conversation piece, all on its own. To me, that is true art.”

The retrospective’s name offers a clue into Louboutin’s thoughts about putting together such a comprehensive look at his work. “That’s why I decided to call it ‘Exhibition[niste],’” he says. “To exhibit yourself is to be nude, to be totally open. I feel like I’m exposing myself, revealing everything.” 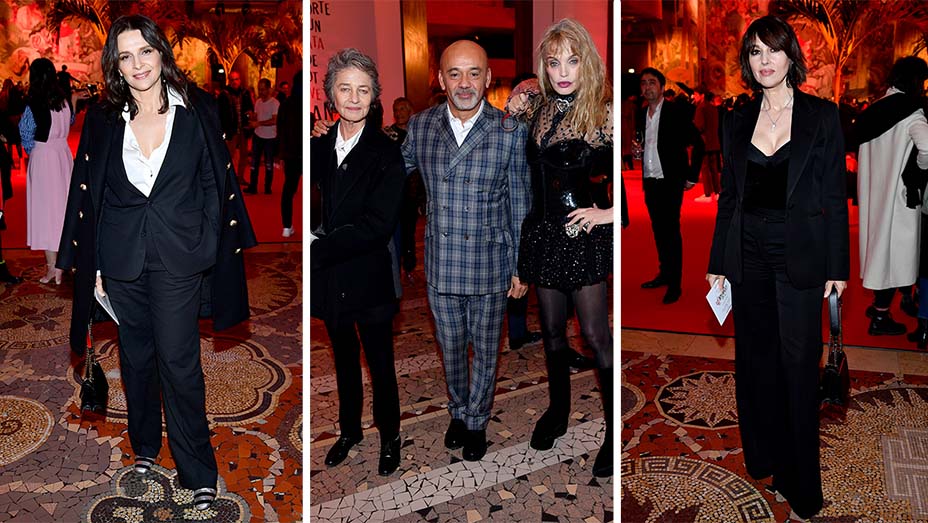 “Exhibition[niste]” kicks off with a simple sign, illustrated with a high-heeled shoe that’s overlaid with a red X, which made a deep impression on Louboutin when he visited the Palais de la Porte Dorée as a child. The sign’s intent was to admonish women about the harm their heels might do to the museum’s mosaic floors, but for the young Louboutin, the message resonated beyond that warning. “Because of that sketch, I learned that everything starts with a drawing,” he says. “Everything we’re surrounded by exists because someone picked up a pen and started drawing. That sketch made me conscious of that.” 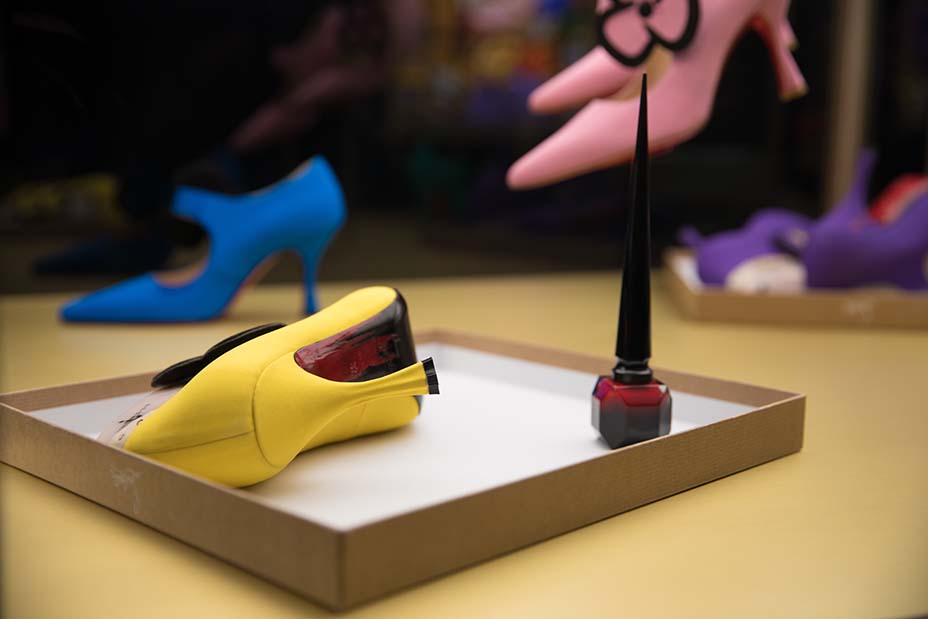 After rediscovering his love for the Palais de la Porte Dorée a few years ago, Louboutin has worked with the venue’s director on refurbishing and updating the space. Once Louboutin agreed to an exhibition, Palais director Hélène Orain suggested Olivier Gabet, director of the Musée des Arts Decoratifs, as the ideal curator.

“What Christian has achieved over the last 30 years is hugely important,” Gabet says. “When you say his name, people not only recognize him for his work, it’s also a symbol of luxury, created by a man who’s proven he can be successful in business while also being a visionary.”

Louboutin and Gabet have been working together on the exhibition for almost two years, reaching out to artists around the globe to create conceptual pieces while also culling through the designer’s considerable archives. “It’s quite complicated to edit, because I love my shoes in the dearest way,” Louboutin says. “That’s why I needed Olivier as an editor. But he’s also a great curator. When he speaks of my work, I can see he has a vision, which is a classical fashion vision.”

“Christian has been very generous in opening his archives, and he really has kept everything,” Gabet says. “He has hundreds, if not thousands of models from the last 30 years, and he can tell you intimate details of each one.” 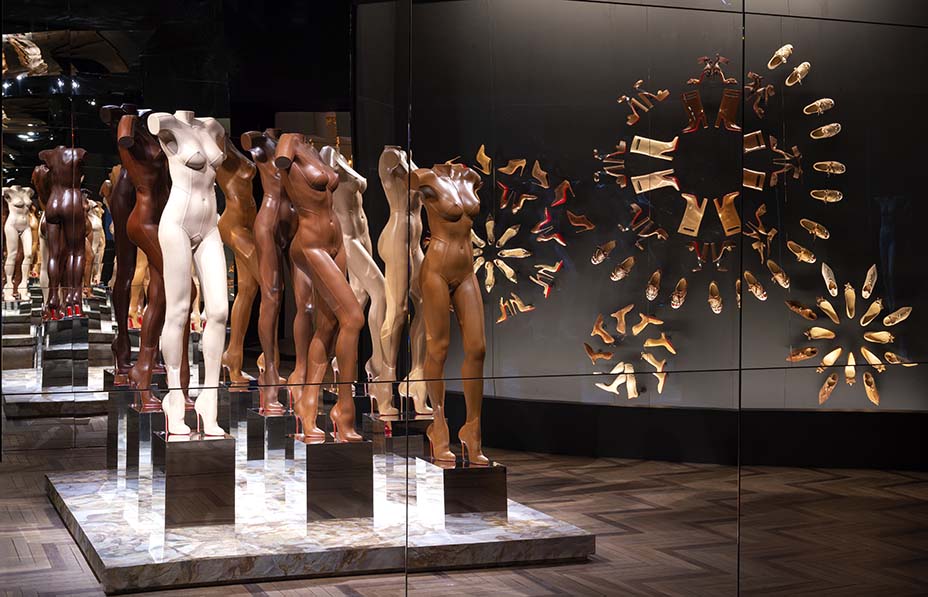 “Exhibition[niste]” explores key elements of Louboutin’s career, from his earliest designs and how red nail lacquer inspired the idea for his now-iconic crimson soles to moments like his 2007 collaboration with director David Lynch on the latter’s “Fetish” photographic series. “Sometimes I’m interested in or moved by someone’s work, by their artisanship, so I go forward to try to meet that person and work with them,” Louboutin says of partnering with Lynch. 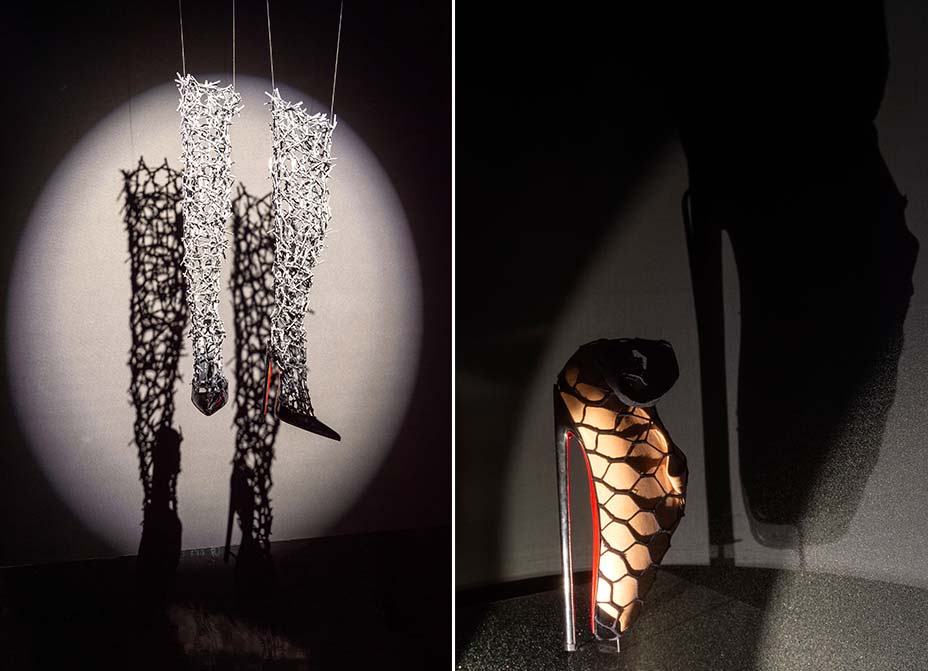 Other moments in the exhibition feature a tribute to Louboutin’s love of the stage and his early days working with the dancers of the Crazy Horse cabaret in Paris. A colorful miniature theater was crafted by Bhutanese artisans, and amid shoe designs for Prince, Mika and others, a hologram of Dita von Teese emerges to perform a seductive dance. In another room, Louboutin’s Nudes collection, launched in 2006, is positioned around nine leather-clad sculptures of the female form, by British artists Whitaker/Malem, in skin tones that correspond to the wide-ranging nude palette of Louboutin’s collection.

Not unlike his original concept for the Nudes collection, the sculptures are meant to extend beyond fashion to address conversations about society and race, Louboutin says. “The Nudes are about more than a beautiful shoe,” he notes. “A collection that highlights a range of skin colors also felt like a way to engage with our society. Your work can be completely on the side of decorative, but a deeper meaning doesn’t have to be a separate thing.” 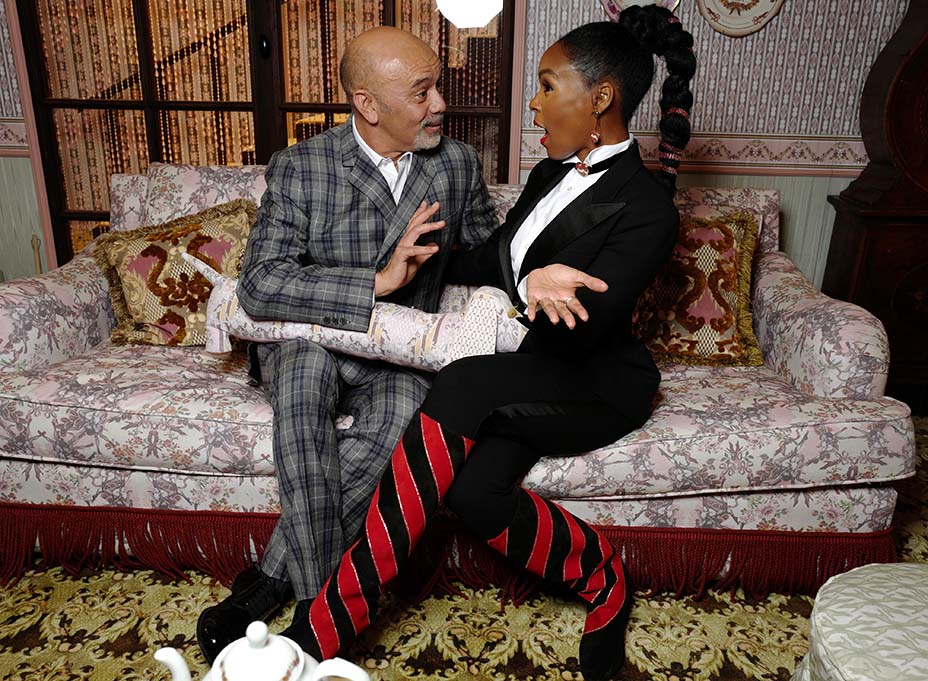 Monáe is among the legion of fans who understand the deeper meaning in his work. “The way he imagines what a shoe can be is extraordinary,” the Homecoming co-star says. “His creative, out-of-the-box approach is what sets him apart from other designers, and what draws us all in to his world of magic and wonder.”