The debut collection of made-in-L.A. denim brand Jean Atelier, now in stores, is elevating America’s favorite fabric to new heights of fashion. The line is co-founded by Citizens of Humanity veterans Jerome Dahan (a founder of 7 For All Mankind Jeans and the founder of Citizens of Humanity, who started his career at Guess in the ‘80s) and Noam Hanoch (the former creative director of Citizens of Humanity who has also designed an eponymous eveningwear line, notable for its body-conscious cutaways and lace insets). Hanoch’s designs have been donned by Taylor Swift, Eva Longoria, Halle Berry, Heidi Klum, Ariana Grande, Rachel McAdams, Nicole Richie and other celebs.

Under the Citizens of Humanity umbrella, the duo have fused their aesthetics to create the upscale, 32-piece Jean Atelier line of jeans, skirts, jumpsuits, dresses and shirts (many made of Japanese selvedge denim) as well as non-denim bodysuits and bomber jackets with the signature lace detailing that Hanoch is known for. Sold exclusively at Barneys New York and Forward by Elyse Walker, pieces range from $425 for distressed jeans to $1875 for a silk bomber jacket with tulle and French lace insets.

Rosie Huntington-Whiteley and Shay Mitchell have been sporting Jean Atelier’s faded blue Flip jean, $525, a straight-leg style with a fold-over flap at the waist. “The idea of this piece is very ‘80s, when girls used to put on their boyfriend’s jeans and flip the waist over [to fit],” said Dahan. “Funny, I just saw a girl in Venice wearing a pair of old Levi’s jeans like that.”

“There’s a market for denim that’s really fashion,” said Dahan. “It’s much more creative and fun; the other end of the market became boring; everyone was doing the same thing.” 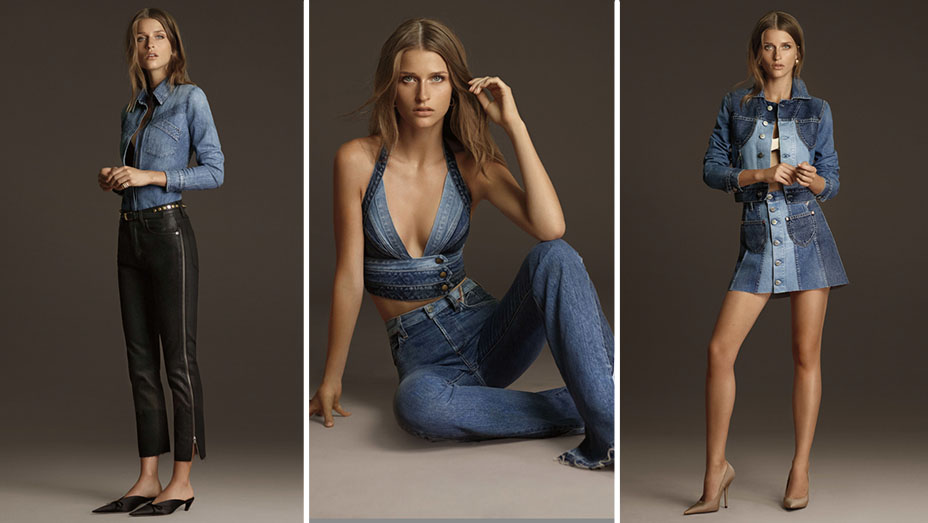 “When people like Uniqlo come in, you have to make a decision: Am I going to try to compete with those price points or am I going to make a product that’s really special and is going to cost more?” added Hanoch.

The 41-piece spring collection ($350 to $900), hitting stores in February, moves away from sexy lace accent pieces and adds in an abstract logo-influenced jacquard denim pattern, sleek coated denim (including a skirt in a bold red hue and black jeans, edged with full-length zippers along the sides), ‘70s-inspired patchwork-stitched denim, and pieces such as chic halter tops made of multiple hues of denim patched together — “something Cher would have worn in the 1970s,” said Hanoch.

@shaninamshaik wearing the Cinch in Stone and Raquel Leather and Lace Bodysuit. Both Available now on @barneysny