Jeremy Scott’s Wednesday-night debut of his Moschino x H&M collab was the perfect antidote after a tense New York day, and that thinking suits him just fine.

You couldn’t blame New Yorkers for being on edge after five pipe bombs turned up Wednesday morning in the mail of prominent Democrats – including Hillary Clinton and former President Barack Obama – as well as the midtown headquarters of CNN, which caused the evacuation of the Time Warner Center in Columbus Circle.

But anyone craving a bit of escapism from that breaking news found it a few hours later in Scott’s exuberant show, a medley of A-list models; a pre-show soundtrack of Gershwin, Porter and Broadway tunes; a dazzling stage set of billboards, video monitors and marquees that evoked thoughts of Times Square and the surrounding Theater District; and, of course, a highly anticipated capsule collection that should sell like crazy when it arrives online and in H&M stores Nov. 8.

Jeremy Scott to Be Honored at amfAR Los Angeles Gala 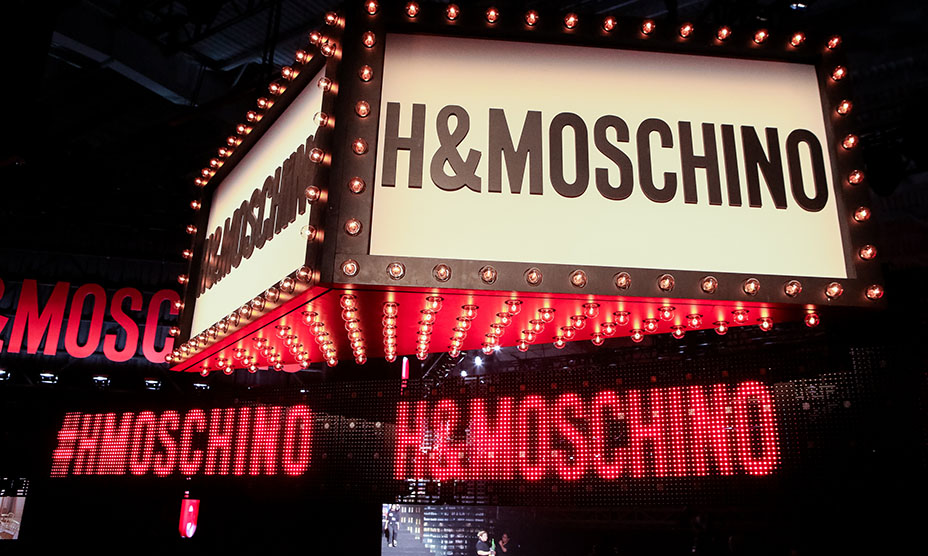 For his part, Scott is only too happy to inject a little joy into today’s world of seemingly nonstop news cycles, which in recent days have been dominated by stories ranging from the murder of a Washington Post journalist in the Saudi Arabian Consulate in Turkey to the Trump administration’s plans to roll back transgender rights. “I think about the Depression era, when people could go to the movies for a nickel and see a double feature, and for a few hours they would transport themselves out of their problems; for a few hours, they could watch the silver screen and be somewhere else,” Scott says. “It’s important for our spirit to experience those moments – also because it allows us to go back and fight the fight, to go back and say, ‘No, you’re not erasing trans people’ or ‘No, you’re not going to intimidate me with terrorism.’ Among all those things you still need to be able to have a moment of joy, to give you the strength to go back and battle for those things that matter to you.”

The 45-look show at New York’s Pier 36 event space was indeed joyful, a more-is-better ode to ’80s and ’90s influences – the faux-leather zip-front minidress worn by Bella Hadid, for example, or the denim bustier on Isabeli Fontana – coupled with streetwear-friendly pieces and a heavy emphasis on accessories and sparkle. A surprise Naomi Campbell sighting is always met with appreciative cheers from an audience, and Wednesday night was no different as the supermodel sauntered down the runway in a silver-sequin minidress to close the show.

Gigi Hadid, who assisted Scott with the announcement of Moschino x H&M at April’s Coachella, opened the show and soon was followed by siblings Bella and Anwar, and the designer says there was meaning in the family’s inclusion. “Gigi’s first opening and closing were with me, Bella walked her first show for me, and so did Anwar,” Scott explains. “All the Hadids started with me at one point or another. I love that kind of pop moment, and love that they had that with me as well.” (Mom Yolanda Hadid also was on hand to watch her three model children from the front row.) 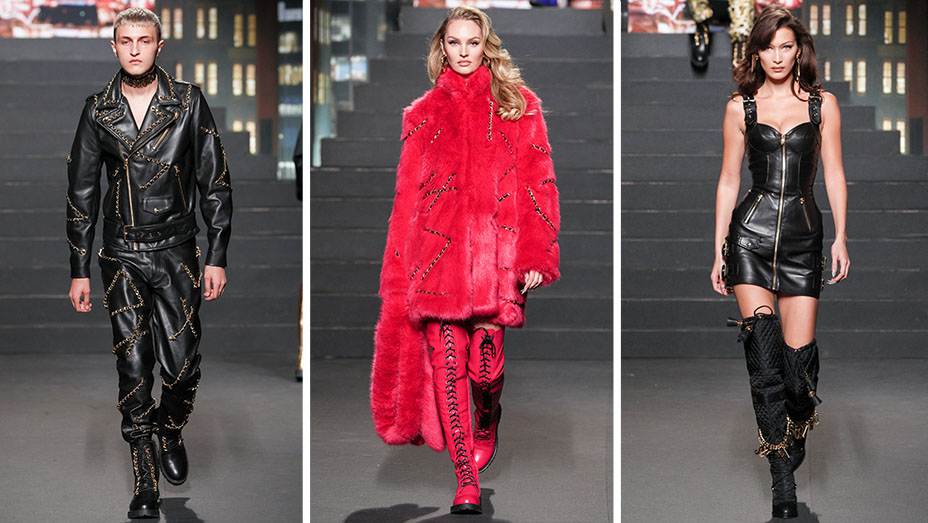 Scott, who wore sparkling silver overalls from the collection to take his finale bow, also offered up his trademark takes on iconic logos and imagery, splashing Disney characters across hoodies, jerseys and sweater dresses, while also creating a mash-up logo combining MTV and Moschino. “I’m a creature of pop culture,” Scott notes. “When I started at Moschino, I did the Moschino-McDonald’s mashup logo, and since then the idea has become a little more prevalent in fashion, so I really wanted to own it with this collection.”

Also in the front row, alongside Frances Bean Cobain, Paris Jackson and Coco Rocha, Marc Jacobs appreciated the over-the-top spirit of the collection. “I love Jeremy’s energy, and I love how full-on bold and unapologetic these clothes were,” he says. Some of Scott’s more playful designs include graphic CD prints – accented with earrings that resembled full-size compact discs – as well as gold condoms employed as a pendant on a necklace worn by Campbell and as one of the mismatched earrings worn by Bella Hadid, part of a safe-sex message sprinkled throughout the collection (the earring on Bella’s other ear? An oversized peace sign). 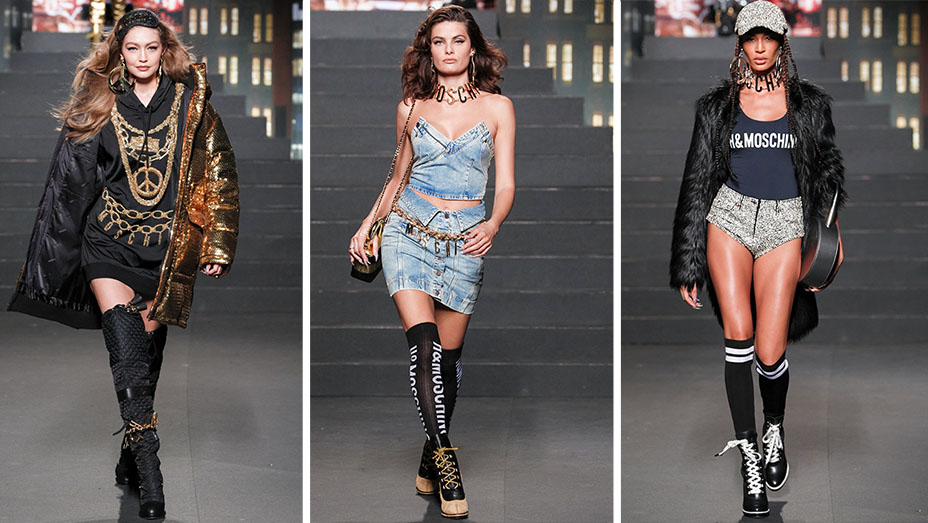 At show’s end, the billboard and video walls rose to reveal sidewalk-style food carts serving sliders and hot dogs, Diplo mixing music on his decks, and an open bar – a cocktail christened “the Jeremy” featured tequila and lemonade, topped with champagne for a touch of Scott-like sparkle – while at the opposite end of the cavernous space, a pop-up store offered all the looks just seen. For many attendees at this instant after-party, the choice between dinner, dancing or being the first to snap up these clothes was a no-brainer, and white shopping bags emblazoned with “H&Moschino” soon began to appear throughout the event. Prices are in keeping with past H&M collabs, ranging from $25 to $300; one woman at the cash registers was spotted trying to divide her $2,500 purchase among multiple credit cards.

Then again, if it’s retail therapy you’re seeking, this lower-priced exploration of Scott’s bright and buoyant Moschino universe just might do the trick. “If I can put a smile on someone’s face,” he reasons, “whether it’s something I’m wearing and they see me on the street, or because something I’ve designed makes them feel good – it lightens them or brightens their day – then that’s the best gift I can give someone.” 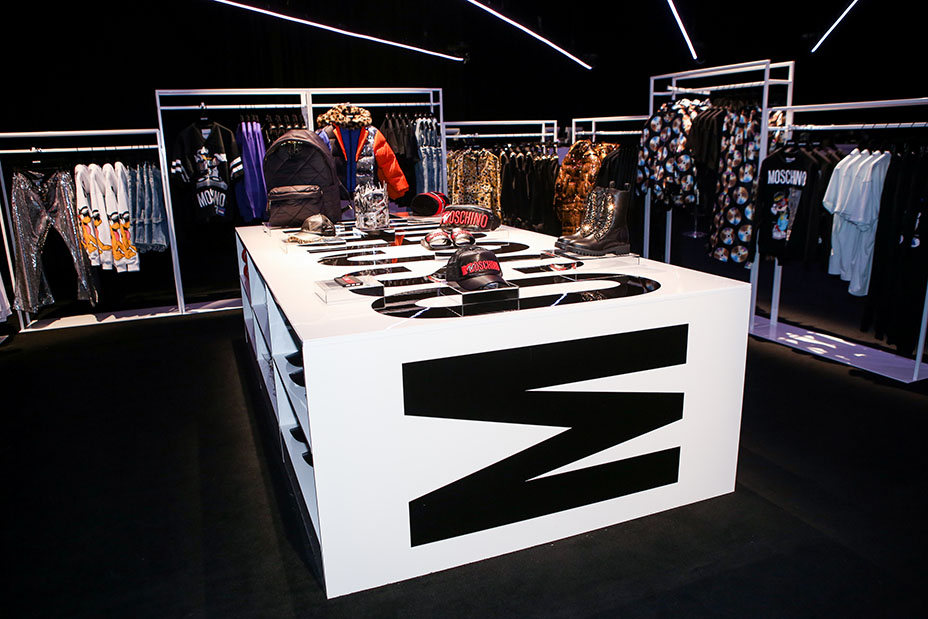 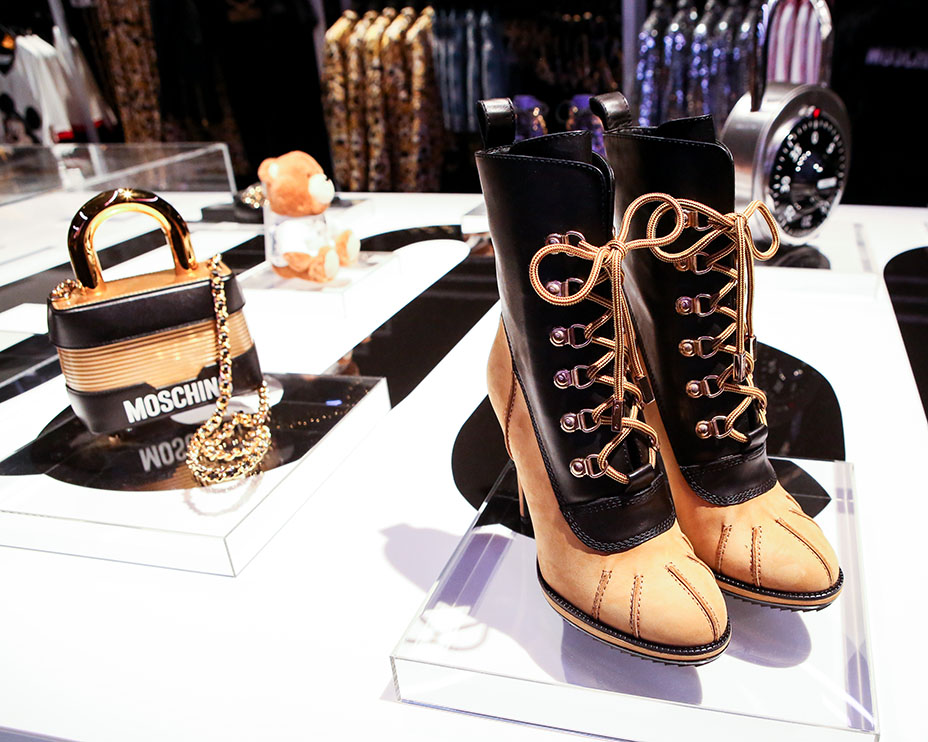 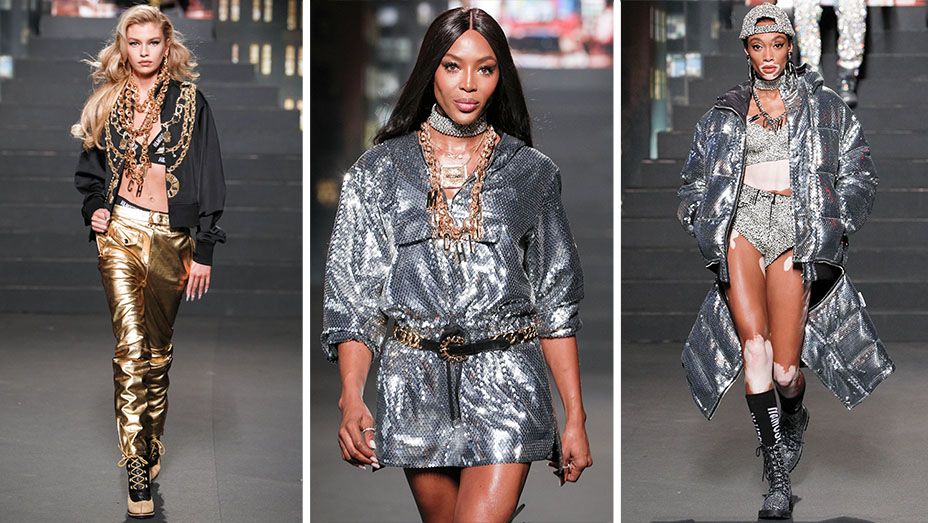