One of Hollywood’s most prolific and powerful film and television writer-director-producers, J.J. Abrams, has floated his plush yet comfortable Pacific Palisades, California, home on the market with a by-any-standard prodigious price tag pushing up on $22 million. The veteran showbiz polymath and his wife, Katie McGrath, purchased the pretty bluff-top spread in early 2014 for $14.47 million, and subsequently transformed the stately mid-1990s residence into an up-to-date family home that is both relaxed and refined with ample space for both formal and casual entertaining.

Through his Bad Robot Productions, which he runs with McGrath, Abrams has created, co-created, written, directed and/or produced a number of hit TV shows, including “Felicity,” “Alias,” “Lost” and the dystopian megahit “Westworld.” He’s also had a hand in numerous blockbuster films, “Star Trek” (2009) and a couple of the “Star Wars” films among them, and his lengthy slate of projects currently in one stage of production or another include the TV series “Lovecraft Country,” a couple of upcoming installments of the “Mission: Impossible” film franchise and a as-yet-untitled sequel to “Star Trek.”

Invisible from the street behind high hedges, strategically placed trees and secured gates along one of the most sought-after streets in Pacific Palisades, the lush and beautifully landscaped .6-acre city- and ocean-view spread has an impressive list of nearby neighbors who include Brooke Shields, private equity bigwig Bill Barnum, Herbert and Bui Simon, he the owner of the Indiana Pacers and she a former Miss Universe from Thailand, Steven Spielberg, whose Sullivan Canyon equestrian ranch is just below the Abrams’ estate, and pop-rock star Adam Levine and fashion model Behati Prinsloo, who just over two years ago paid former couple Jennifer Garner and Ben Affleck $32 million for a sprawling compound that was once owned by another heavy-hitting Hollywood power player, Brian Grazer. 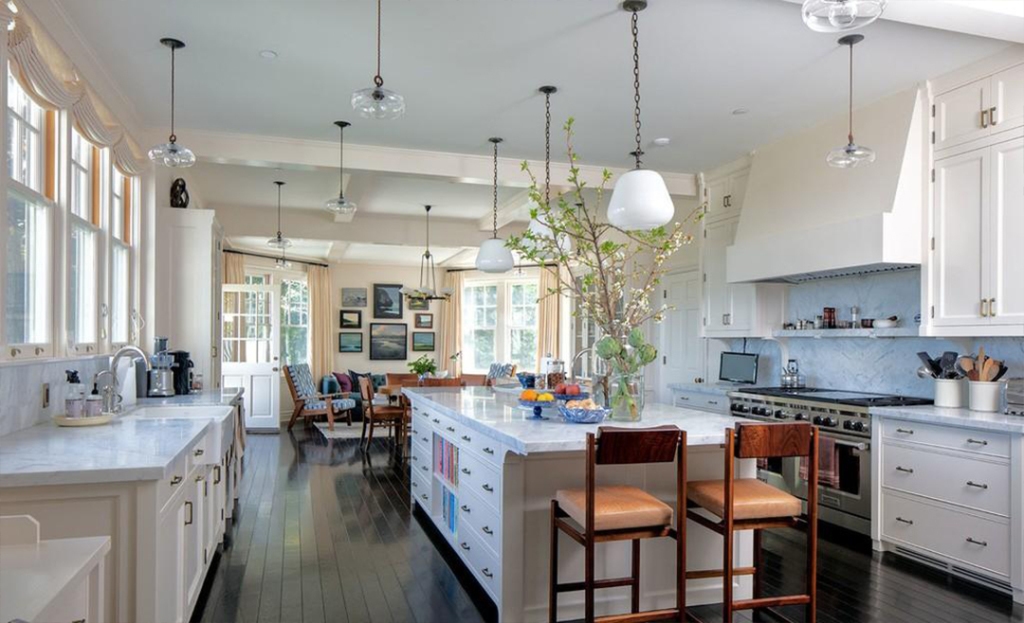 Current listings held by David Offer at Berkshire Hathaway HomeServices California Properties show the Abrams’ roughly 7,400-square-foot clapboard-sided Connecticut-style traditional has five bedrooms and four bathrooms, plus a trio of powder rooms. A few of the many other creature comforts include a total five fireplaces, a high-tech security system, a crafts room, a staff or guest suite, lustrous ebony wood floors and, throughout the main floor, a comprehensive audio system with in-ceiling speakers.

Beyond the light-filled double-height center hall foyer, there are ample formal living and dining rooms, both with fireplaces and the former with a full wall of bookshelves opposite a wall of floor-to-ceiling windows.

Updated and reconfigured since it was last sold, the kitchen is an airy, culinary dream with thick marble counters, snow-white furniture-grade cabinetry and the usual array of designer appliances expected in a $20-plus-million home. With convenient access to the backyard, the adjoining breakfast area is plenty large enough to accommodate a cozy lounge area.

A casual, comfortably furnished separate family room is wrapped in humble bead board paneling with a huge flat-screen TV mounted above the painted brick fireplace, while a sun porch lined with Gothic-style windows functions as a games lounge with ping pong and foosball tables.

The home’s handful of bedrooms include a main-floor guest suite that opens to a fountain-enhanced secret garden and a spacious second-floor homeowner’s retreat complete with a private terrace, outdoor fireplace, two custom-fitted walk-in closets, a private study/office, and what marketing materials describe as a “lavish hotel bath.”

With both an outdoor fireplace and in-ceiling heaters, a loggia looks out over the fastidiously groomed backyard with open views that sweep across the city from the Getty Center, over the Century City skyline and to the Pacific Ocean.

Knee-high boxwood hedges and other sculpted plantings define the backyard’s various recreational amenities that include secluded patios, a built-in grill, a heated swimming pool with inset spa and a bocce court.

The Abrams, who have three children, including up-and-coming 21-year-old singer-songwriter Gracie Abrams, own another much more modest (though expensive) home in Pacific Palisades they scooped up in 2018 for $2.6 million, as well as a residence in Santa Monica’s coveted Rustic Canyon neighborhood that was scooped up in an off-market 2017 deal valued at close to $6.3 million and since rebuilt.