Place Louis Vuitton? No this isn’t a plaza in Paris, but men’s artistic director Virgil Abloh and the French luxury giant managed to transform Paris’ iconic Place Dauphine on the Ile de la Cite by the Pont Neuf bridge into a mega-branded “petite quartier” for the floral-themed men’s spring-summer 2020 show. The setting came complete with Louis Vuitton-branded park benches, a bouncy castle and balloons, as well as LV coffee, ice cream and crepe stands with bistro table seating for guests kitted out with Café Louis Vuitton napkins, ashtrays and more — “postcard scenery of Paris with the mundanity of everyday café life,” according to show notes.

Details from the Place Dauphine in Paris. For #LVMenSS20, #VirgilAbloh combined postcard-worthy scenery of Paris with playful childhood elements. Watch the latest #LouisVuitton show on Instagram and louisvuitton.com Photos by @ivar.wigan

Kite-inspired invites to this specially created pop-up neighborhood drew guests such as actor Joel Edgerton, Formula One race driver Lewis Hamilton and musicians Frank Ocean, J. Balvin, Ben Harper and Maluma. The Colombian singer and supermodel Gigi Hadid took a moment to catch up prior to the show, discussing jet lag and the scant air conditioning in the French capital, among other things. “I went out last night to the Christian Louboutin party; I’m loving my first fashion week,” said Maluma. The pair recently became acquainted in New York. “I met Gigi at the Met Ball,” he confirmed. Hadid, who was wearing a custom white Louis Vuitton men’s shirt and trousers, said she was attending men’s shows for the first time, too, taking a rare moment to relax and watch, not walk, the shows. 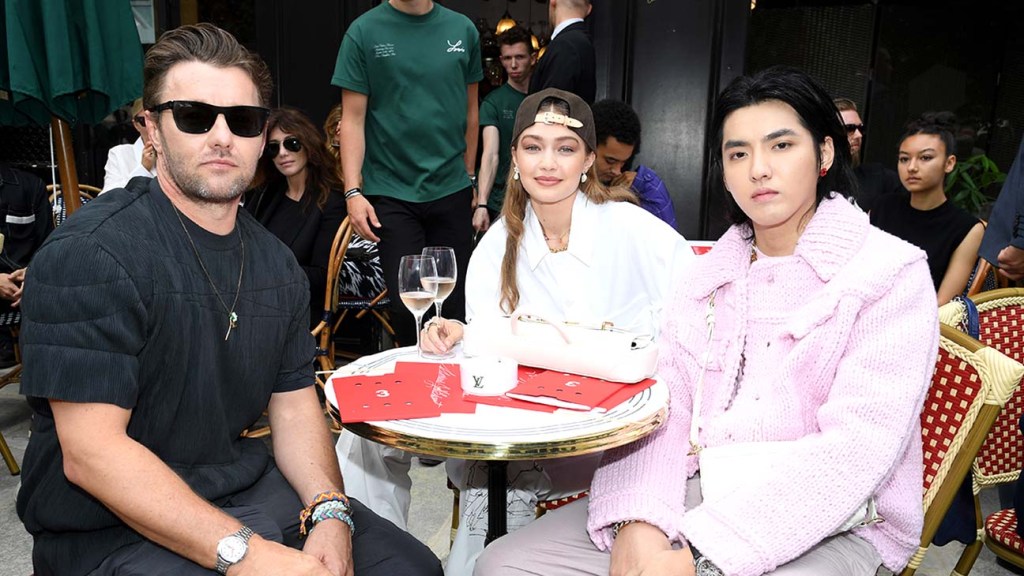 Also attending their first Louis Vuitton show were YouTube sensations Ethan and Grayson Dolan, the comedy duo known as The Dolan Twins and signed to AwesomenessTV, who were practicing their French coffee ordering skills preshow, while getting tips from Vuitton staff for visits to the Louis Vuitton Foundation Museum and the city of Chartres, where the original Notre Dame cathedral is located. “I love the art emphasis at Louis Vuitton; it makes a statement but not too flashy,” said Ethan Dolan. Wearing an Eiffel Tower balloon hat given to willing guests, his brother concurred, “You can wear it in any setting.” 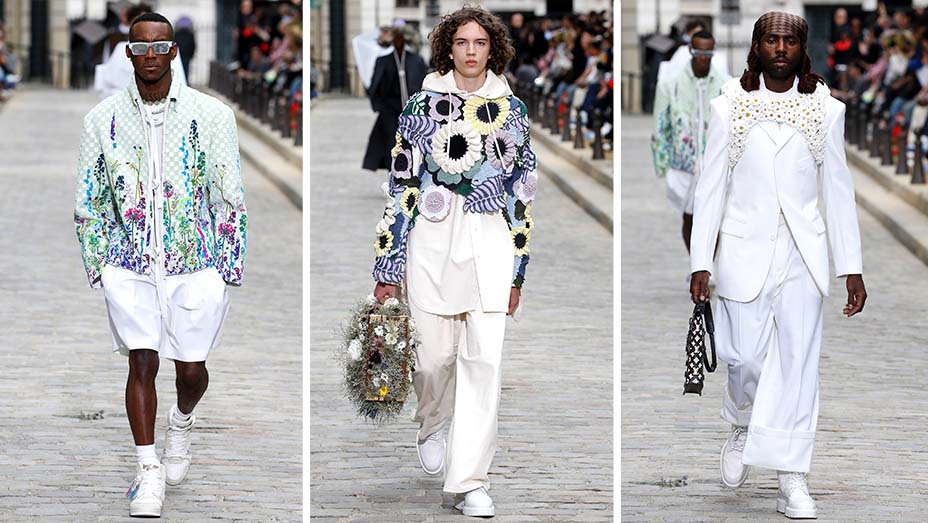 Abloh proposed another Parisian staple, the flower, for spring — blooming on men’s clothes in a bold new way, weaving real flowers through straw hats, basket bags and draped across T-shirts or in embroidered and crochet details on garments. Bold mixed-floral silk prints drove home the theme. He also suggested gender fluidity by showing men in long full pleated skirts, and plenty of sweet sherbet-colored ensembles, refreshing monogram prints in sheer chiffon and floral jewelry. Suit jackets were bound across the chest and multiple ties traversed oversize anoraks, hoodies and pants, which had a Japanese mood. (And, should anyone think the trend is going away, there are new variations of the sparkly harness that Timothee Chalamet championed at the Golden Globes in January.)

For all its romance, the collection also had a technical aspect with cargo pockets and a gray cape that practically doubled as a pitched tent. Whether to drive home the endless savoir faire behind a Louis Vuitton bag or the notion of building a personal bag arsenal, several men’s bag styles — backpacks, fanny packs, sling bags, messenger bags were assembled into one large unit, some complete with a box kite — and worn across the upper body like armor. 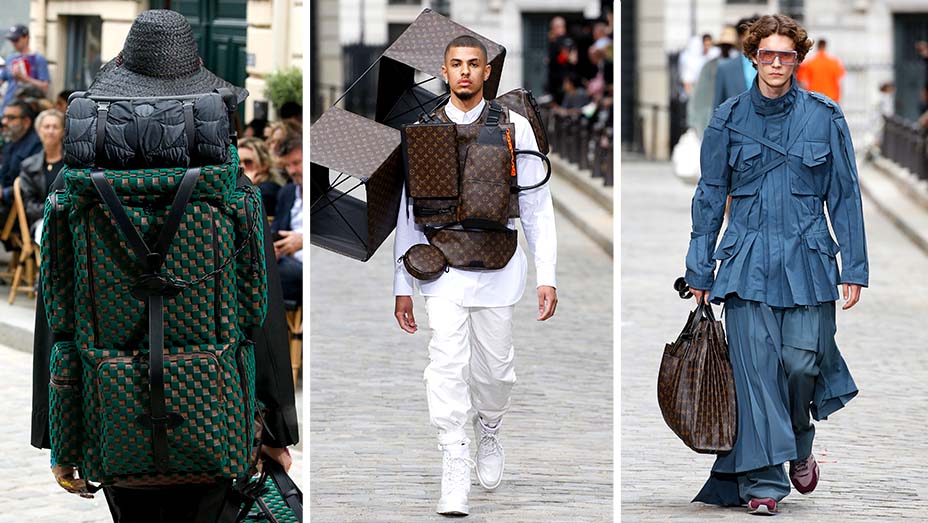 The idea of men in such demonstrative flowers was daring and, according to show notes, highlighted the “rising stars of horticulture…reflective of harmony and peace of mind.” But ironically, just the day before at Abloh’s Off-White men’s show dubbed “Plastic,” his set comprised fields and fields of white carnations with a long blue plastic alien statue in the middle. As the show (which had overtones of survival gear) ended, models trampled the flowers, not so subtly suggesting that taking our environment for granted will leave us in a plastic world sans nature. It’s clear Abloh has been thinking long and hard about the state of the environment, as were many designers at the men’s shows in Milan last week.