The Jonas Brothers’ longtime stylist Avo Yermagyan, based in L.A., was given just “a day and a half’s notice” before hopping a plane to join the pop trio on video set for their comeback single “Sucker” that dropped March 1. “I found out on a Wednesday and we were in London that Friday fitting for the video,” he tells The Hollywood Reporter of working on the vibrant video clip — directed by Anthony Mandler and shot at Hatfield House in Hertfordshire England, the childhood home of Queen Elizabeth I, also featured in Yorgos Lanthimos’ The Favourite.

“Anthony is a master director and really helped set the tone,” said Yermagyan, named one of THR’s “Rising Hollywood Stylists To Watch” earlier this month. “Imagine you’re a 20-something musician in love and the world is your oyster, and you’re filming in a palace. The possibilities are endless! And we captured that energy.” The opulent visuals in the video — which has racked over 79 million views since its debut earlier this month — helped propel “Sucker” to the top of the Hot 100 in its first week, surprisingly the band’s first-ever No. 1 on the chart, despite moving a whopping 17 million albums (and over 1 billion streams globally) throughout a stacked career. 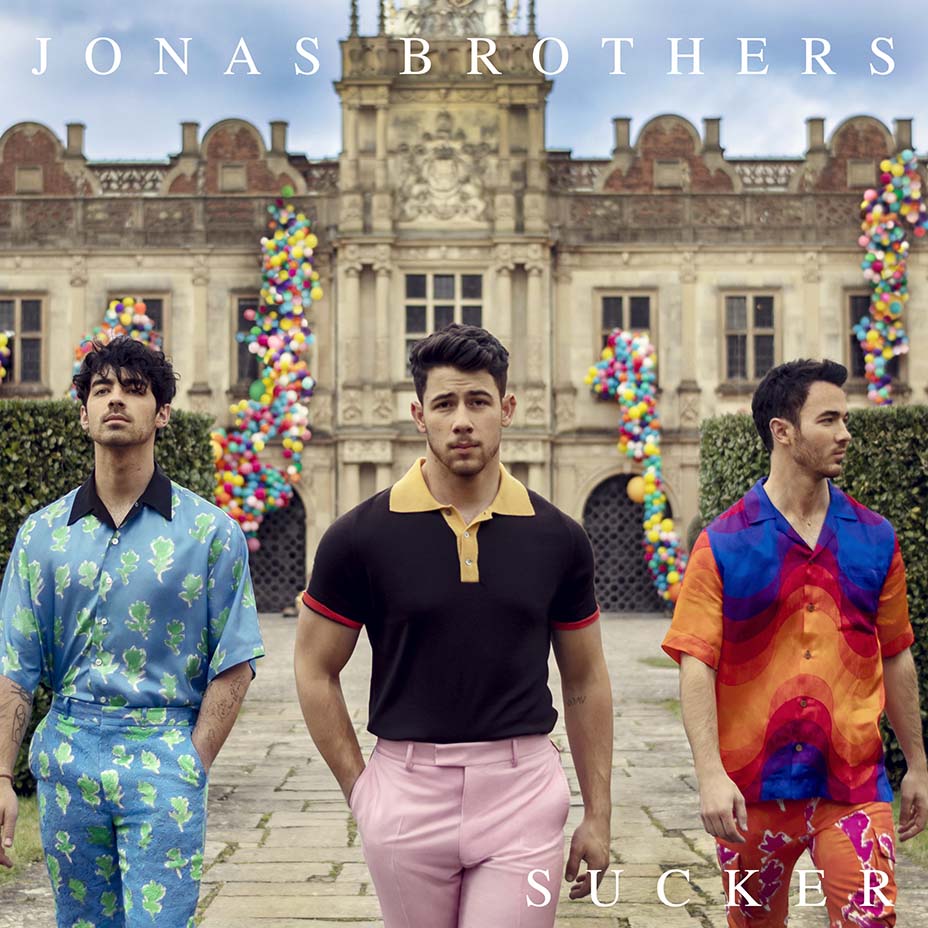 Yermagyan secured the buzzy first Prabal Gurung looks for his star clients after B-lining it backstage immediately following the line’s debut last September. “So stoked that our first menswear collection is on my fave brothers,” Gurung shared on Twitter last month. “I am over the moon.”

“I think everyone was in shock. I don’t even know how to put the response into words,” Yermagyan says of the clip’s already-iconic status. “I walked into Barney’s a few days after the video came out and the mannequins were dressed in Dries and Prabal, which was very special.” 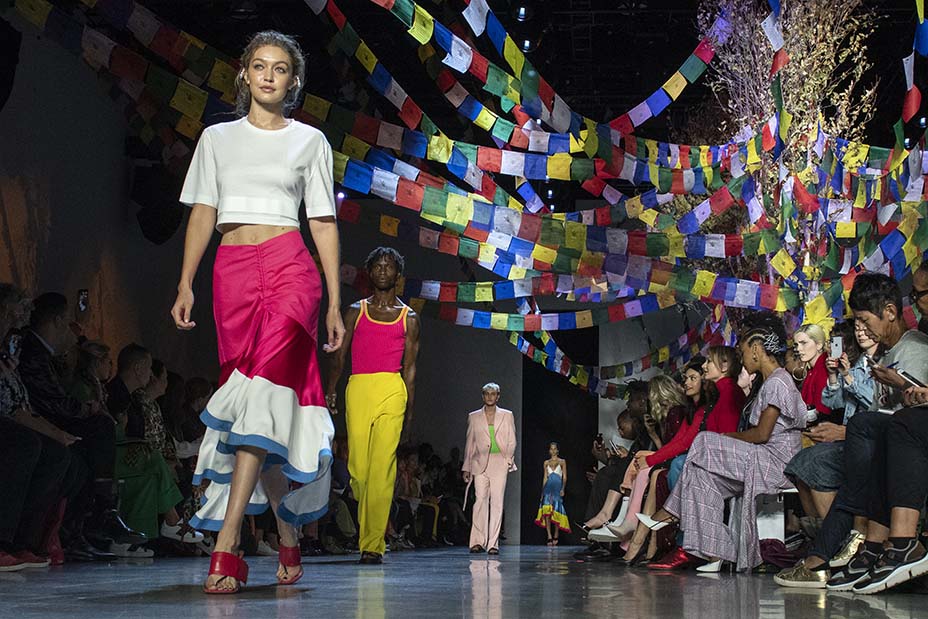 While Yermagyan previously helmed his own publicity firm, Gaudy PR, a chance 2012 encounter with acclaimed photographer/director David LaChapelle shifted his career pursuits. “I was working with a European pop singer who wanted to set up an album shoot with David,” he recalls. The unnamed artist, who had no stylist, asked Yermagyan to step into the role at the last minute and LaChapelle sensed he had a knack for the trade. “David said, ‘I see you have a gift, you’re obviously in the wrong business,’” he says with a laugh. A week later, Yermagyan was “thrown into” another LaChapelle shoot for Harper’s Bazaar China styling 15 models. Soon after, Yermagyan ran into Nick Jonas during New York Fashion Week.

After linking up for an off-the-cuff street-style shoot, the stylist cemented their creative partnership by securing a magazine cover for the band and styled them through their appearance on Good Morning America in October 2013 to announce the band’s breakup. Then he stayed on to style Nick for his burgeoning solo ventures (pushing him into edgier looks, such as a plaid Versace suit and white high-tops at the 2015 Grammys) and Joe, after he formed pop band DNCE in 2015.

BIG DAY COMING UP TOMORROW Our new collection with @kswiss hits more @journeys stores. You got yours yet??

Now, after a six-year hiatus, the brothers Jonas are all grown up (and off the market) for their comeback. Kevin’s wife Danielle Jonas, Joe’s actress fiancée Sophie Turner, and newlywed Nick’s wife Priyanka Chopra all star in the new “Sucker” video, styled by Anya Ziourova in runway looks from Tomo Koizumi, Elie Saab and more.

As for the guys, Yermagyan approached the reunion with looks that played up each brother’s individual style strengths. “I didn’t want to revisit the past with them. It’s a new sound, a new era,” he adds. “I wanted to pick bold prints, play with color, add in new silhouettes (the wider shoulders and oversized tops) that are fashion forward with a street style element.” He also made a “very conscious” effort to avoid any boy band cliches — à la matchy-matchy looks from NSYNC and Backstreet Boys in the aughts. “As the grown men that they are now, they all have their own lane, and could dip in and out as easily from their personal projects back to the Jonas Brothers with ease. The old rules have been broken.”

After masterminding DNCE’s “over-the-top” aesthetic since its inception, Yermagyan has made a distinctive style shift for middle brother Joe to separate his two projects, opting for monochromatic and tailored looks when alongside his brothers. “I still wanted to be bold but also sophisticated, and have it be a departure from what we did with DNCE,” he adds, citing brands like Joshua Kane and Dsquared as ideal. For eldest brother Kevin, who was “more or less dark” during the band’s hiatus, his new look in the video was a complete departure, with sequined suits and a heavy lean on bold prints. “He used to be a little more conservatively dressed, but we didn’t want to play by any of the old rules.”

Yermagyan emphasized Nick’s rock star edge in a runway Dior suit, paired with a Prada shirt and Calvin Klein boots, as well as a green velvet Balmain dinner jacket and a “fully bespoke” Joshua Kane tuxedo. “More is more,” he says of the layered approach. He also leveraged Nick’s global fan base and growing Eastern influence (a nod to his Bollywood star wife) by pulling in a crimson velvet suit and an embellished robe by Dubai-based Filipino fashion designer Michael Cinco.

A career highlight for Yermagyan was dressing Nick for his regal Jodhpur, India nuptials to Chopra in December. “Nick and Priyanka’s wedding was a dream,” he recalls. “I’ve tied his bow tie countless times over the years, but this day was far more meaningful. I was dressing my friend for his wedding and it was an honor.” 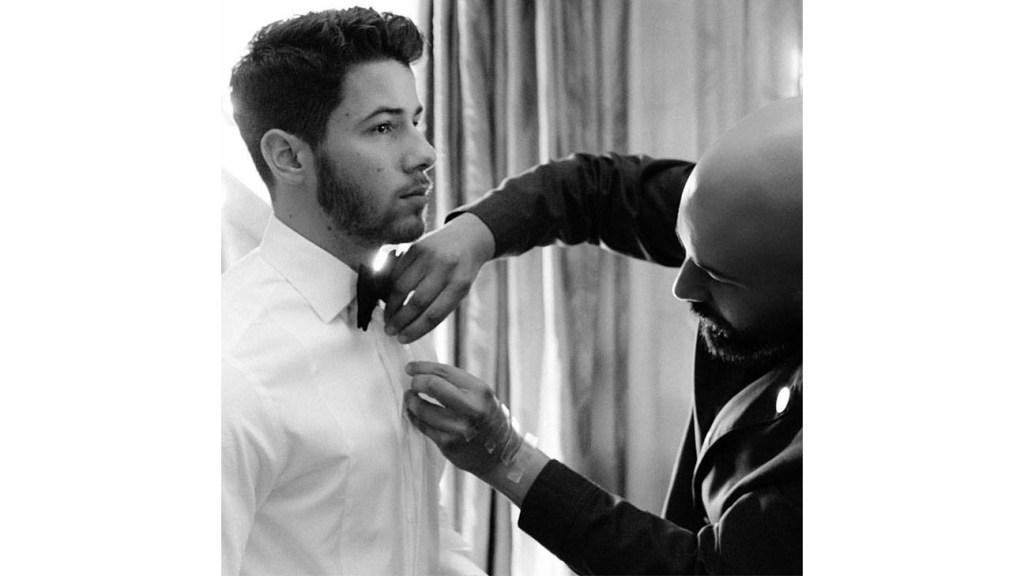