Reality show concepts now range from botched plastic surgery to surviving naked in the wild. But years before extreme became the norm, Jonathan Antin was bringing the day-to-day drama of his hair salon to the small screen.

As one of the Bravo Network’s original fashion/beauty reality stars, on 3 seasons of Blowout, Antin bridged the glamour gap between behind-the-chair styling of Ricky Martin, Madonna and Leonardo Dicaprio, and the business of his Beverly Hills salon.

After the show went off the air in 2006, Antin created a hair care line called Jonathan, with the hero product being a pomade paste called Dirt (he sold his shares of the company in 2010), and in 2013 opened the Jonathan George salon with stylist Amanda George, which has since closed.

Well, now he’s back at it again, with a new Jonathan Antin Salon on Brighton Way that he runs with his wife, Secie, catering to clients including Katharine McPhee, Gavin Rossdale and Sistine Stallone. This time, his approach is back-to-basics, with an emphasis on striving for that perfect cut that actually gets better as it grows out. 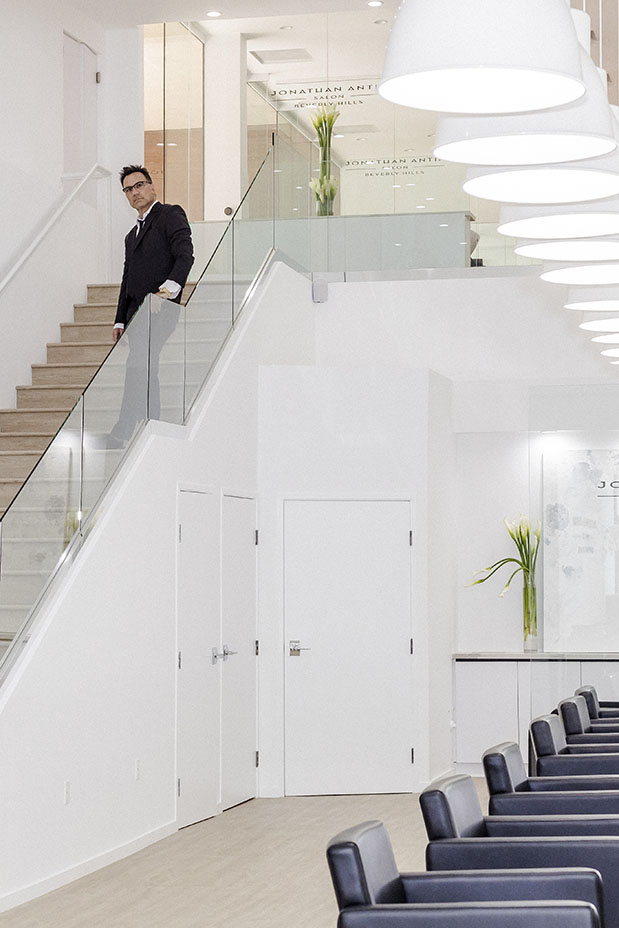 “I went back to my roots with this salon. I’m starting my own new culture,” says Antin of the 3,000-square-foot, two-story space with ergonomically designed cutting chairs and its own terrace area. “I learned a lot of lessons.”

One of those lessons was to hire stylists who come to him sans attitude. “I wanted to bring in the young, cool, social media-savvy, really talented, edgy stylists and colorists that are still teachable,” he says. “Basically, I just didn’t want the big divas in here. I didn’t want any attitude. I wanted to build a salon and not just a team, but it’s a culture and more of a family.”

He recalls his first salon in West Hollywood that stayed open for two decades, where world-renowned stylists and colorists Sally Hershberger, Lorri Goddard and Chris McMillan all worked in the early days of their successful careers. “While we were all there, we were all like family, and I really wanted to go back to that here,” says Antin.

Even though the cameras are no longer rolling, Antin still has snappy sound bites, hashtags and fearless hustle. He plans on launching another product line soon and has not written off a return to reality TV.

Since the end of Blowout, Antin hasn’t exactly disappeared from the small screen. He has starred in Shear Genius (also on Bravo), made regularly appearances on WE tv’s LA Hair, and given beauty advice on CBS’ The Doctors and makeovers on season 10 of The Biggest Loser.

Until he hits Hulu or goes back to Bravo, the beauty personality and longtime stylist is happily handling the hair of some of L.A.’s most finicky clients.

He’s even coined a new mantra, which of course has become a hashtag, “#lifestylenothairstyle.”