Continue to The Hollywood Reporter SKIP AD
You will be redirected back to your article in seconds
Skip to main content
August 4, 2017 10:00am

All eyes were on Justin Bieber when he arrived to celebrate his new t-shirt collab with his longtime stylist, Karla Welch, at Maxfield in West Hollywood Thursday night.

Bieber, who didn’t stay long, made a public appearance one day after taking to his Instagram to explain why he had canceled his tour. “Me taking this time right now is me saying I want to be SUSTAINABLE… I want my career to be sustainable, but I also want my mind heart and soul to be sustainable,” he wrote.

Although fans surrounded the pop star for a selfie (he nicely declined the requests, however, he did take a few photos with his stylist’s family), the woman of the hour was Welch, who greeted and hugged practically every guest that came to celebrate her latest project, the Hanes x karla collaboration.

Welch’s clients — America Ferrera, Tracee Ellis Ross and Elisabeth Moss (in the crop tee) — as well as hairstylist-to-the-stars Jen Atkin and Chris McMillian, jewelry designer Jen Meyer and Bieber’s manager, Scooter Braun, were among the evening’s attendees. Fellow stylists Erica Cloud (who previously worked with Welch before striking out on her own), Cristina Ehrlich, Elizabeth Stewart, and Wayman Bannerman and Micah McDonald also showed their support. 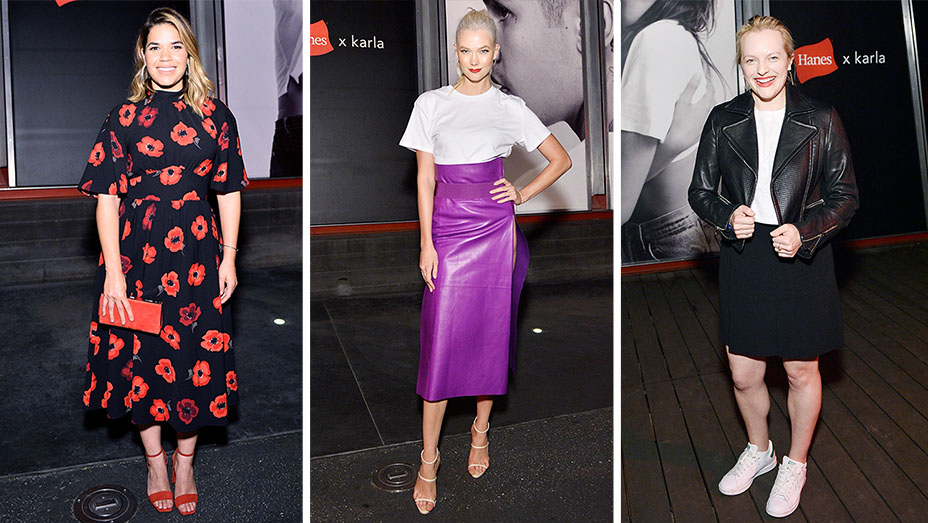 Anthony Anderson Reacts to Emmy Snubs for Final 'Black-ish' Season: "Can You Believe That S***?"

Karlie Kloss, who’s styled by Welch, stepped out for the launch party with her mom and sisters after celebrating her 25th birthday at Disneyland during the day. The 6’2” model, clad in the crew tee and a high-waisted Salvatore Ferragamo leather skirt that featured a thigh-high slit, stood tall (in her Giuseppe Zanotti heels) over the chill crowd.

Images and video from the Hanes x karla campaign, which stars Bieber, Joan Smalls and Kaia Gerber, were on display throughout the evening. It was hard to miss the campaign video as it projected on repeat against a massive outdoor wall. Soko played DJ as guests enjoyed pork rib tacos, cheese quesadillas and specialty cocktails from Casamigos Tequila.

The tees ($30 each) were on display and available for purchase at Maxfield during the party. For those who haven’t had a chance to purchase the shirts on xkarla.com, which launched online Thursday, the collection will also be up for grabs at the luxury boutique starting Aug. 6.

As Welch told The Hollywood Reporter this week, “The whole process has been about making a white shirt for everybody … that’s affordable to everyone.”