Paris Fashion Week was a win for South Korean superstars Blackpink. Chanel, Celine and Saint Laurent all saw the global girl group draw huge crowds as they hit up the most fashionable front rows. Their mere presence was the entertainment.

“Solo” singer Jennie made her way to the Chanel show on the last day of Fashion Week to see creative director Virginie Viard’s first full ready-to-wear collection. Crowds were so large that police blocked off the access at the Champs-Elyseés, making guests walk (gasp!) to the Grand Palais on foot. After the show, Jennie, dressed in a springy blue bow-tie top despite the chilly rain, declared the collection “very chic.”

The K-pop idol said that bringing fashion and music together is much of the genre’s appeal. “Music can be just one-sided if you hear it, but if you see it with a visual and an image, it opens up a whole new world. I feel like it’s all connected,” she told The Hollywood Reporter. “I personally don’t like to draw a line between ‘K-pop’ and pop music, but I do think it is a good time for K-pop artists to be shown to the world, because the world is just ready for it.”

Jennie said that, while her band had hit the week’s fashion shows, they weren’t all in Paris at the same time. “We shared photos and we’ll compare our favorites later,” she added. 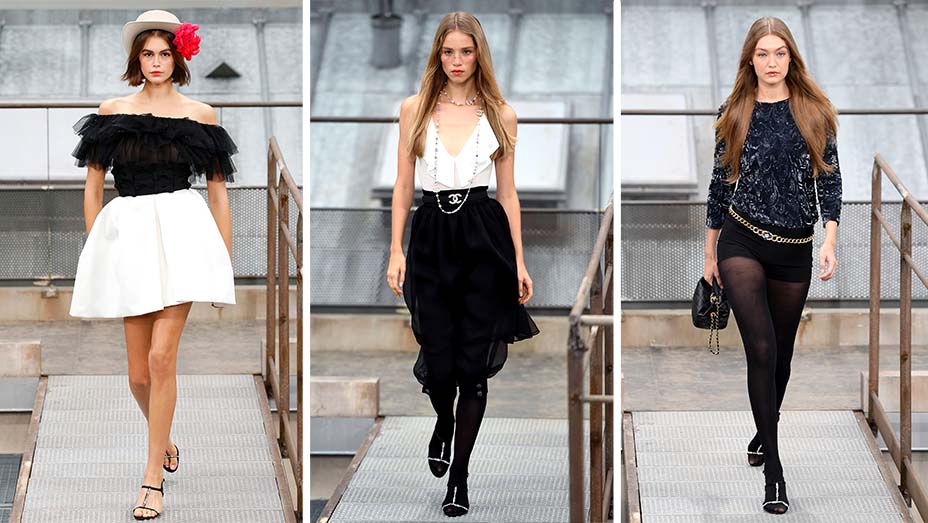 The show saw a prankster crash the catwalk before being confronted by Gigi Hadid. It happened so fast that many guests missed the moment, but saw the security scuffle. The stage was set for models to walk along the traditional gray rooftops of Paris.

Viard didn’t vary from the house’s historic tweed and bouclé, but updated the look with some very short, shiny shorts and bucked the voluminous prairie and puffed-sleeve trend we’ve seen elsewhere in favor of a more practical Parisian vision. Models were in flat shoes, too. The first several looks were black and white, with pops of pink, purple and royal blue, as the show went on. The new skyline logo print on slouchy pajama suits was comfort chic at its best.

The scene at Celine was complete chaos earlier in the week, when Blackpink member Lisa showed up. Hundreds of fans lined the streets for hours before she arrived, with police cordoning off blocks around the building ahead of the evening presentation.

Fans chanted her name as she entered and exited the building, while others cried as she walked by — much to the bewilderment of other guests. “My mind is slightly blown,” said Juno Temple as dozens of normally nonplussed fashion show invitees swarmed the front row to take photos and edged everyone else out of the way. 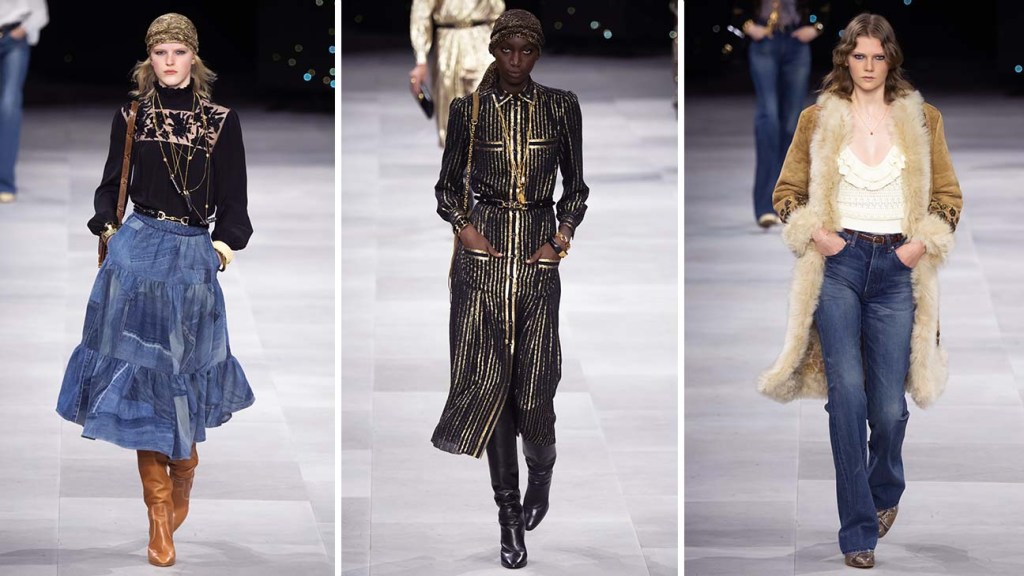 At Celine, Hedi Slimane abandoned his itty-bitty 1980s aesthetic and mined the more laid-back ’70s era with denim, denim and more denim. Flared jeans and slim-cut shirts were topped with tweed blazers, pussy bow blouses and gold brocade. It was a more relaxed Slimane, who spends much of his time in Los Angeles — very luxe Laurel Canyon. Slimane also showed sparkly head wraps, as did his contemporary Anthony Vacarello at Saint Laurent earlier in the week.

How K-Pop Superstars BLACKPINK Are Rewriting the Girl Group Narrative

There, Blackpink’s Rosé sat front row, where she told THR that it was the first time she had attended a fashion show without her bandmates. Then again, she has the band’s 21.1 million Instagram followers to keep her company.

with the amazing @anthonyvaccarello @ysl