Since 1983, the Fashion Group International has honored creative icons past and present in fashion and fashion-adjacent industries through its annual Night of Stars Gala. While the global nonprofit, whose mission is to provide resources to support its members’ careers, has an official Trailblazer Award (given to supermodel, entrepreneur and philanthropist Iman this year), all of the prestigious 2019 award recipients could arguably hold such a distinguished title.

Held on Thursday, Oct. 24 at Cipriani Wall Street, the gala was hosted by bon vivant and Barneys Creative Ambassador-at-Large Simon Doonan whose husband, ceramicist Jonathan Adler, was the Brand Heritage honoree. While their mutual appreciation for one another’s craft was made clear in a series of amusing anecdotes, every honoree and presenter shared genuine rapport, leading to speeches both heartfelt (take Laverne Cox’s tribute to Iman, “the woman of [her] dreams”). 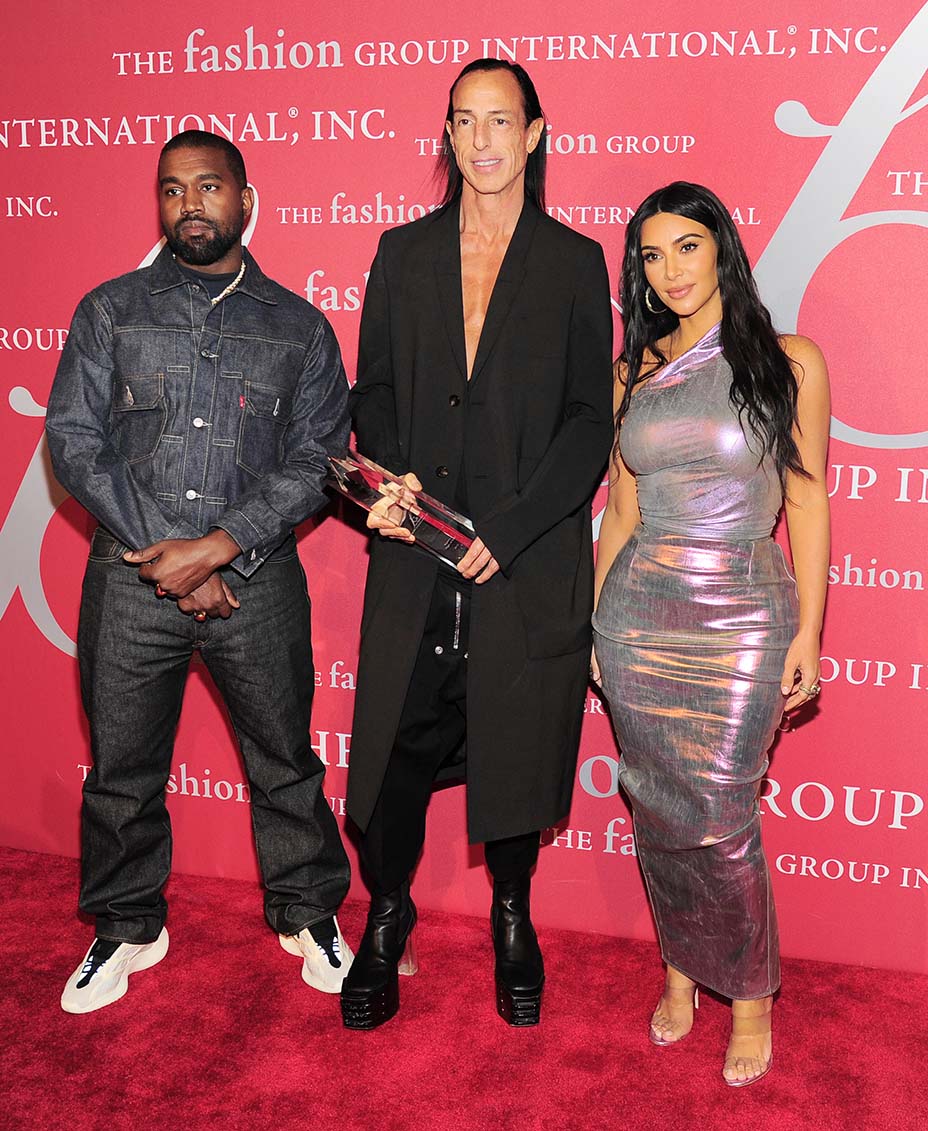 During Kanye West’s profession of love for avant-garde fashion designer Rick Owens, recipient of the 2019 CFDA’s Menswear Designer of the Year Award and now FGI’s Superstar Award, the event’s top honor, the rapper and fashion mogul fully admitted to blurring the lines between admiration and imitation.

“When I called Rick to talk about this evening, half of the conversation was just me apologizing to him for knocking off his color palettes,” said West, whose Yeezy line is known for its neutral tones. Clad in a slinky, metallic, one-shoulder dress by the designer, Kim Kardashian West spoke alongside her husband and called Owens “a major source of inspiration.” Few can forget Kardashian’s white, second-skin ensemble by Owens at the 2018 CFDA Fashion Awards. 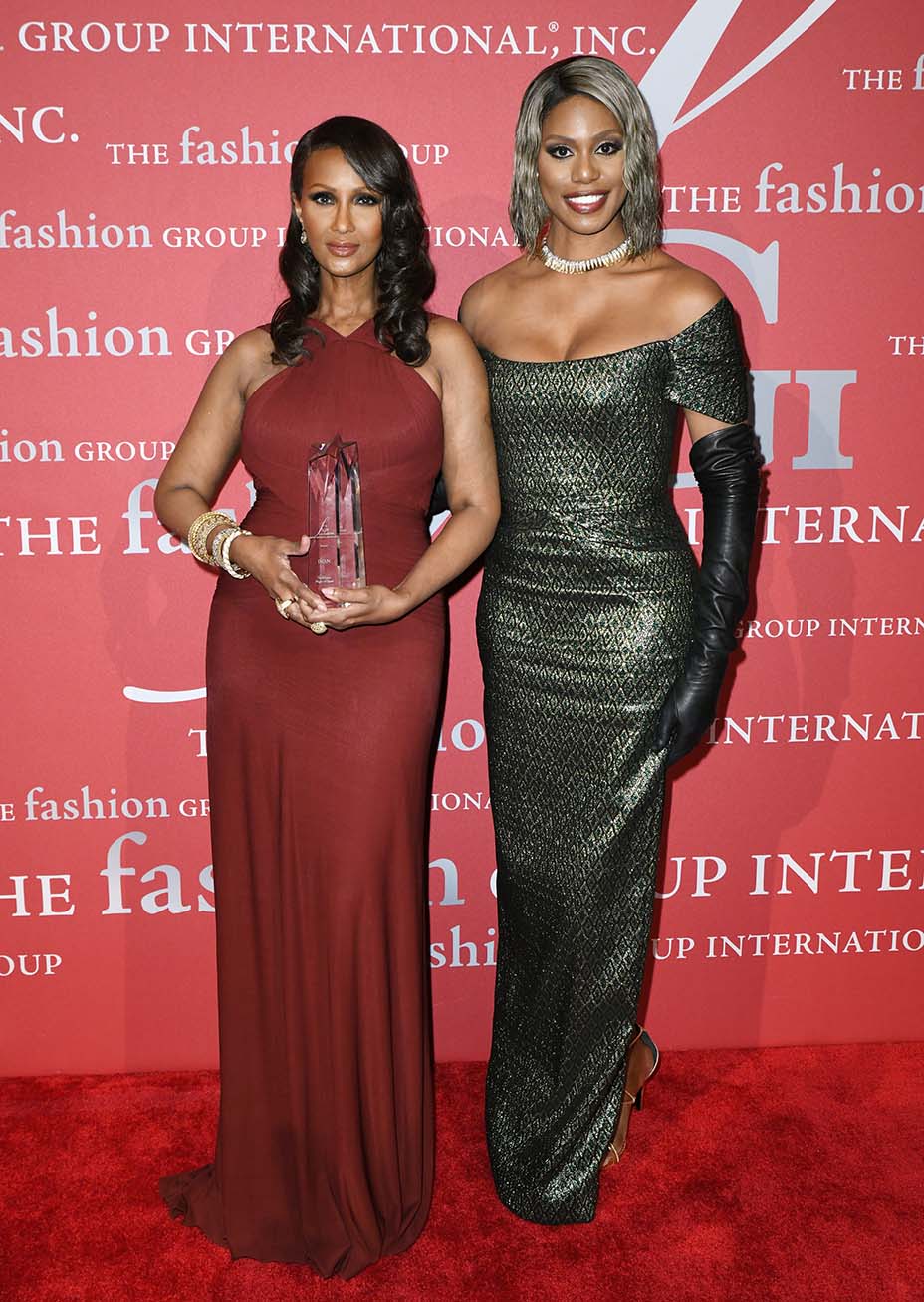 “I argue with people. I mean, this is what I do: controversial… But you can’t say nothing about Rick Owens,” exclaimed Kanye, who just released his highly anticipated ninth studio album Jesus Is King. West also praised Owens’ wife and muse, the inimitable Michèle Lamy, whose relationship to Owens West likened to his own. After citing A$AP Rocky’s lyrics, “Raf Simons, Rick Owens usually what I’m dressed in,” to show Owens’ significance in not just high fashion, but as Kanye said, “the streets,” West also called the California-born designer the “Michael Jordan” of American fashion. “They said ‘L.A. fashion’ like as a compliment tonight,” said West, referencing earlier speeches in which Los Angeles was called a major fashion capital. “That used to be a dis!”

Couturier Ralph Rucci was recognized with the Fashion Legend Award for raising the caliber of American fashion, as Rucci was the first American designer since Mainbocher to be asked by the Chambre Syndicale de la Haute Couture to show a couture collection in Paris. While he lost his namesake line in 2014, he returned to Paris this summer with the newly launched and particularly well received RR331 couture label, making the night’s award particularly validating. 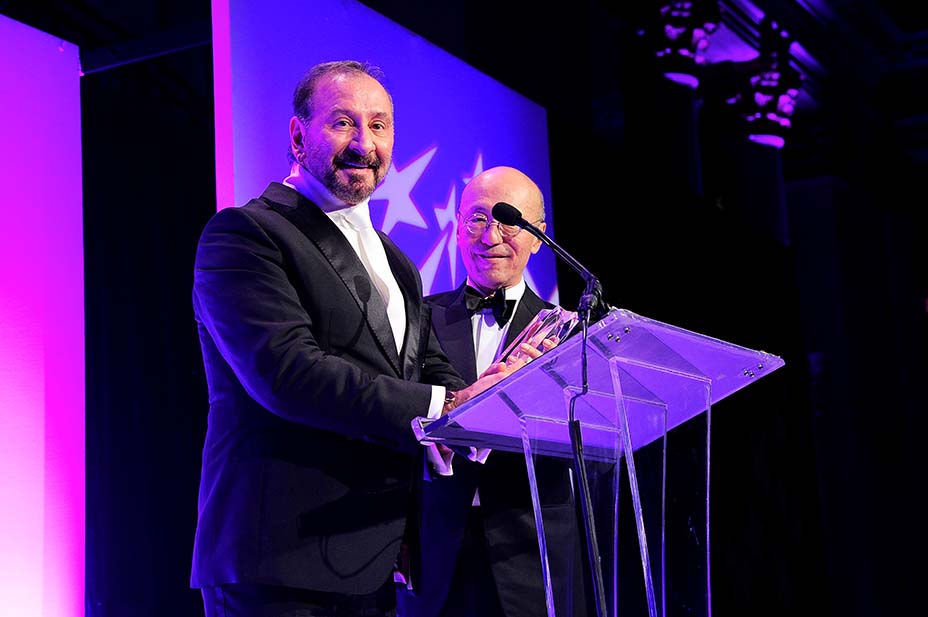 Fashion stylist-designer Brandon Maxwell, whose designs for Michelle Obama, Oprah, Lady Gaga, the Duchess of Sussex and more earned him the 2019 CFDA Womenswear Designer of the Year Award, continued his winning streak with FGI’s Fashion Star Award. Maxwell told The Hollywood Reporter that the event was “a great full circle moment.” 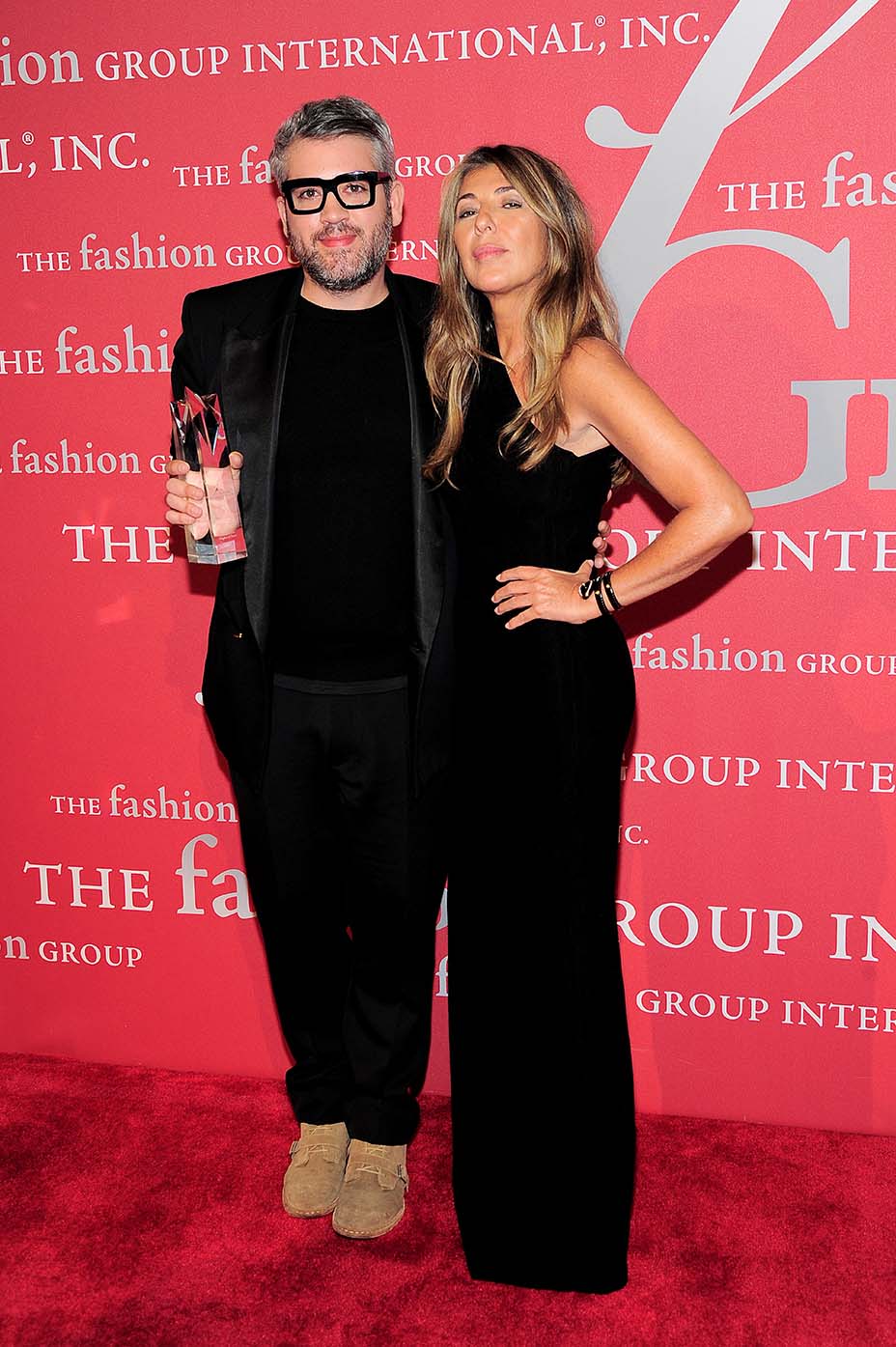 The designer’s Project Runway co-host, Elle editor-in-chief Nina Garcia, presented him with his award, three years after honoring him with FGI’s Rising Star title. Maxwell shared that he owes much of his quick ascent in fashion to Margaret Hayes, FGI’s former president who championed the young designer. During the gala, FGI paid tribute to Hayes and late fashion designer Isabel Toledo, who both have FGI scholarships named in their honor.

Maxwell was one of many honorees to use his speech as a platform for change. “Behind the smoke and mirrors of this industry there are hard truths,” he said. “Beginning as an optimistic intern, access into the room is limited. Be the person who opens that door… For young creatives, access to funding and support is crucial. Be the person that writes that check. All of this, every step, is made all the more challenging if you don’t look a certain way. Be the person that helps to end that.”

Exemplifying the words Maxwell preached were presenter Cox and Trailblazer Award recipient Iman. “One of the most thrilling moments from my childhood growing up in Mobile, Alabama, in the 1980s was that one time every month when my mother’s monthly subscriptions of Essence and Jet magazines would arrive,” said Cox. “There was this one issue in particular of Jet that made my heart stop. On its cover was the most beautiful woman I had ever seen.” 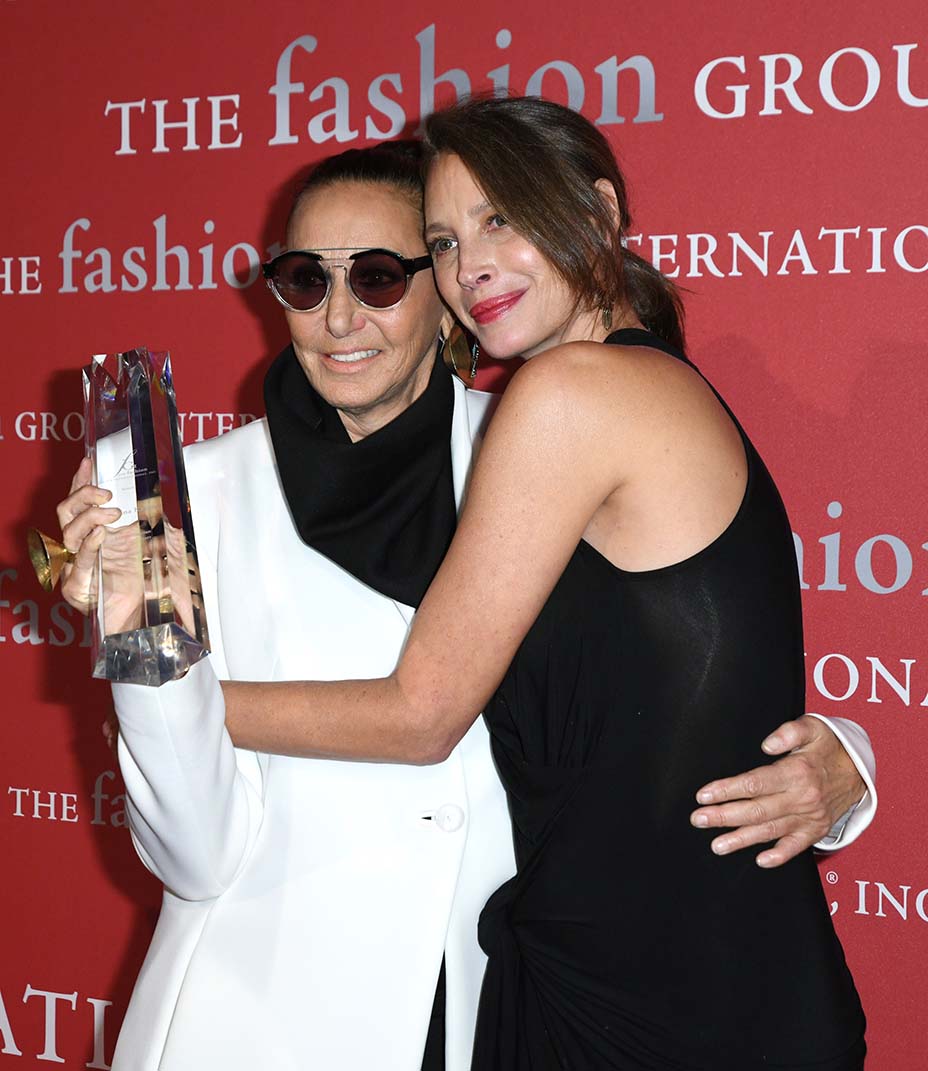 But beyond praising Iman’s beauty and inspiring life as a former refugee and immigrant, Cox lauded her strength in advocating for equal pay for models or all races, as well as creating Iman Cosmetics, a 25-year-old brand providing shades of foundation and more for skin of color, paving the way for Rihanna’s Fenty Beauty. “When I dreamed about becoming a woman, a woman of elegance, refinement, taste, intelligence, integrity, seductiveness, warmth and wit, I dreamed about Iman,” said Cox, asking the audience to rise to their feet in her honor.

Other award recipients included clean and makeup artist-cosmetics entrepreneur Gucci Westman for the Beauty category, Delphine Krakoff for Interior Design, and International Flavors & Fragrances for Sustainability. The night concluded with model-entrepreneur Christy Turlington presenting the Humanitarian Award to designer and philanthropist Donna Karan, whose company Urban Zen does everything from employing and giving global artisans a platform to providing integrated therapists in hospitals. “Dressing is truly about addressing,” said Karan, who emphasized the idea of conscious consumerism to THR. “It’s about the world we live in today.”

Echoing and yet anticipating Karan’s sentiments in his own acceptance speech, Owens poignantly captured the FGI’s Night of Stars Gala’s overarching message: “How we dress can be one of the first steps towards becoming the people we hope to be.”