Continue to The Hollywood Reporter SKIP AD
You will be redirected back to your article in seconds
Skip to main content
June 10, 2019 10:49am

Pener began the discussion by asking each panelist, “What’s on your wrist?” Abdul-Jabbar slowly lifted his wrist and looked at his watch saying, “I have on a Tiffany Tesoro gold watch that was given to me by Tiffany on the occasion of my retirement from professional basketball in April of 1989. It has my number on the face of it. I’m trying to preserve it — I rarely wear it. It’s my favorite. Usually, they sell it with a white face on it, but they gave it to me with a gold face.” Seeing Abdul-Jabbar’s watch — emblazoned with the number 33, for his jersey number — Kotsiopoulos exclaimed, “That watch is beautiful. It’s a work of art!”

Abdul-Jabbar, who sometimes wears a Tiffany pocket watch, explained that his curiosity for watches began when he visited Versailles and was taken on a private tour of Louis XV’s Clock Room dedicated to the study of time and filled with timepieces. His interest was further piqued on subsequent travels: “When I went to Tulum, I got insight on the Mayans’ take on time, which blew my mind. They had it down so precisely — even down to the leap year. Time, we don’t get that much of it. I’m 72. It’s a very precious thing.” 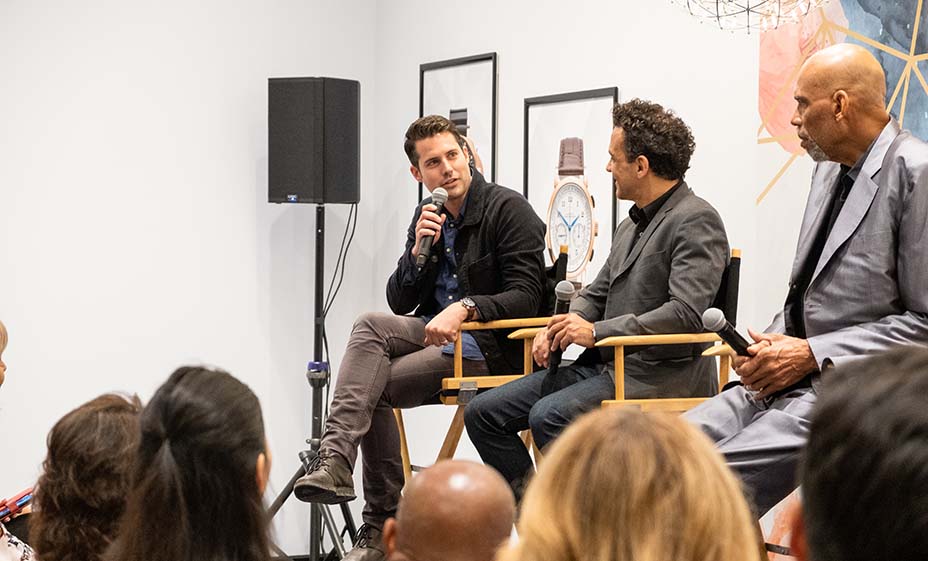 Bruss, who was donning a limited-edition Sinn chronograph pilot’s watch called the 103 Sa B E, showed his timepiece to the crowd and explained that when it debuted at the Baselworld watch fair last year, he was likely up late looking at news online about all the new watch releases. “Probably my wife was telling me to go to bed and I thought, ‘I should try and secure that watch,” he recalled.

Kotsiopoulos was wearing a classic Jaeger-LeCoultre Reverso wristwatch. “It does magical things!,” he said, demonstrating that the case of the watch can be flipped over. Pener noted that Jaeger-LeCoultre’s Reverso watches were originally designed for polo players to protect the watches’ crystal faces during matches.

“Oh, yes, that’s what I use it for!” joked Kotsiopoulos, whose watch collection also includes an IWC Portugieser and a Piaget Altiplano. He said that he still rues the loss of a vintage Omega that had been his father’s, which was stolen from him during a mugging during his first month of living in Los Angeles.

Bruss’ interest in watches traces back to his childhood. “I’m from Wisconsin, and my family has a 100-plus-year-old retail store and we sold watches, amongst other things, and we sold the Victorinox Swiss Army watch,” he explained. “All of the men in my family wore one, and when I was in high school, my dad got himself a new one and gave me his. Not a lot of people were wearing analog-style watches, but I was really proud of it and I felt naked without having it on my wrist.” Bruss added that he still has the watch his father gifted him, one of his most treasured items.

Bruss has continued the tradition of gifting watches, explaining, “We have a lot of Midwestern folks working at Funny or Die, and Shinola is a brand that I think people really love. They’re cool-looking watches that come from the Midwest and they make a cool gift — better than a bottle of whiskey, as it’s much more interesting and meaningful.” 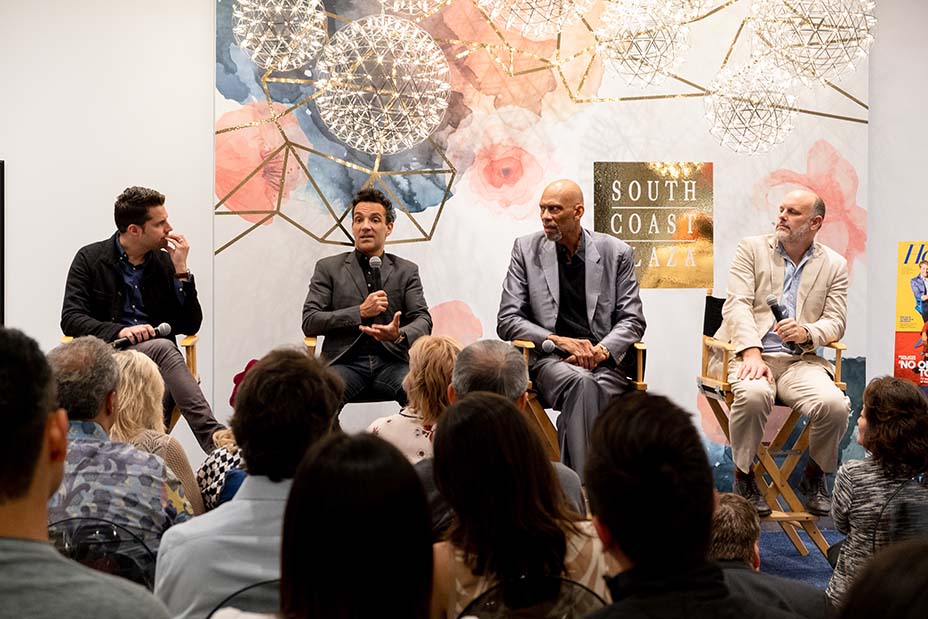 When Pener asked if any of the other panelists had ever given a watch as a token of appreciation, Abdul-Jabbar admitted that, while he was playing basketball professionally, he’d gifted two watches to two different girlfriends and wished he could have the watches back, which caused the audience to erupt in laughter. “The watches were a gold Rolex and a Piaget Polo,” he explained.

Bruss’ “holy grail” watch — the one he dreams of getting one day — is a Patek Philippe Aquanaut Travel Time Ref. 5167 with a dual-time-zone function for local and home time. “It’s everything you could ever need and it’s very, very subtle,” he said. The wait list for the watch is lengthy, as one audience member attested: “I’ll get mine in a couple years. I ordered it and put a deposit on a 5167 a year and a half ago.”

Bruss encapsulated the power that watches often hold — and the stories attached to them — saying, “I think sometimes watches help you tell the world, or sometimes reflect back to yourself, what you’re interested in and what kind of person you aspire to be.”