As long as she can remember, Alison Mosshart — artist and lead vocalist of indie rock band The Kills and blues rock group The Dead Weather — has had an opinion about fashion.

“When I was 2, I stopped wearing dresses,” she says. “It’s a really emotional thing, but I feel completely anxious wearing dresses or a skirt. It’s like, I can’t run away from a bad guy or climb over a fence, or do certain things. I know it’s all bullshit and I could do that in a dress, but for some reason it feels limiting.” But when it comes down to her day-to-day fashion, “I feel like a superhero in certain things,” says Mosshart, who has fronted campaigns for the likes of Eddie Borgo, J. Lindeberg and Equipment. “That’s my preferred state of feeling.”

Fashion aside, there are plenty of reasons why Mosshart might feel superhuman as of late. For one, she’s coming to the end of an 18-month world tour with The Kills to promote their fifth album, Ash & Ice. Then there’s the debut of her gallery show, Fire Power, Hollywood, featuring 39 of Mosshart’s paintings from 2013-2015 (which first showed in New York two years ago), on view at Maxfield in Los Angeles through Oct. 4. 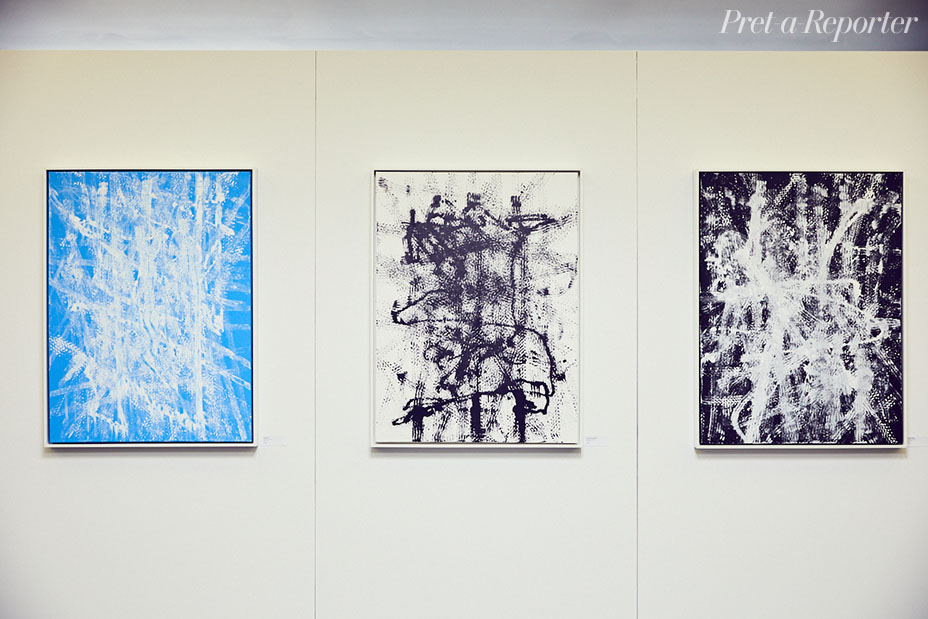 The title of the show, she says, comes from a painting of the same name. “To me, the whole feeling of this show is this movement, this craziness of every pace and no place,” says the rocker, who first picked up a paintbrush as a child at the urging of her mother, a high-school art teacher. “A lot of the art was painted on tour, in backstages, in hotel rooms, parking lots — literally.” Other pieces, such as her tire-track paintings, were completed in her Nashville studio.

For Mosshart, painting is a way to stay occupied on the road. “It’s very exciting to play, but there’s the other 23 hours of the day, which is basically waiting for that [on-stage] moment. There’s lots of things you don’t want to do because you don’t want to use up your energy, you don’t want to get distracted.” 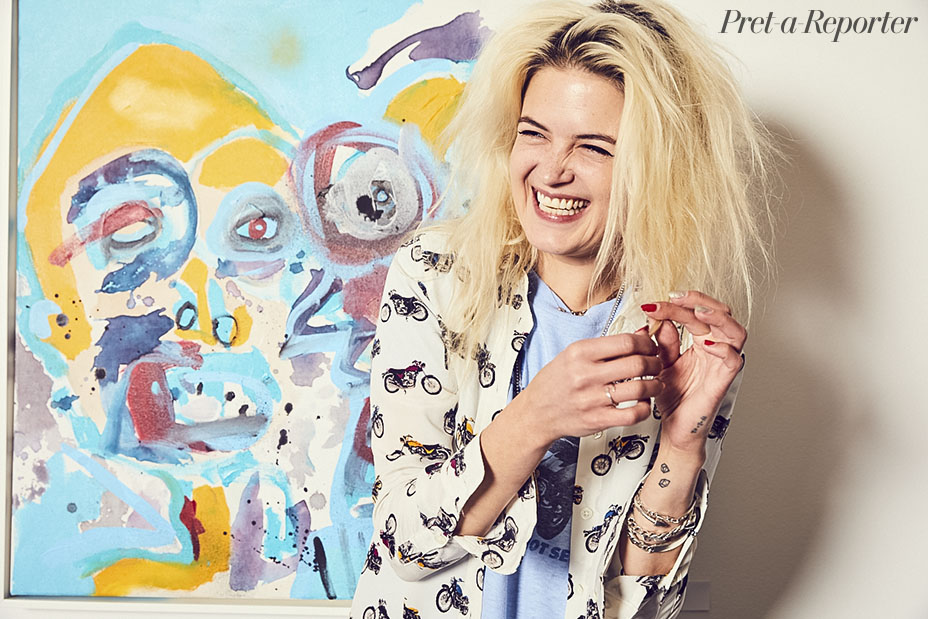 Painting, music and fashion have always been intertwined for Mosshart, starting with her early love of skateboarding, which she was drawn to, in part, for the artwork found on the decks. And there was also the music that the older kids in the skateboarding scene in her native Florida were listening to. “That got me into all my bands, and clothes were just a part of that same thing. It’s all a big mix. I wanted to draw everything, and sing, and write. It’s all the same thought process.”

Back in Los Angeles (she splits her time between here, Nashville and London, where she formed The Kills with bandmate Jamie Hince in 2001), and ahead of her show opening, Mosshart dishes on everything from her extensive leather jacket collection to her deep-rooted love of muscle cars, and the pieces that make her feel invincible, on- and off-stage. “Fire Power, Hollywood” runs through October 4. Maxfield, 8825 Melrose Ave., L.A., maxfieldla.com. 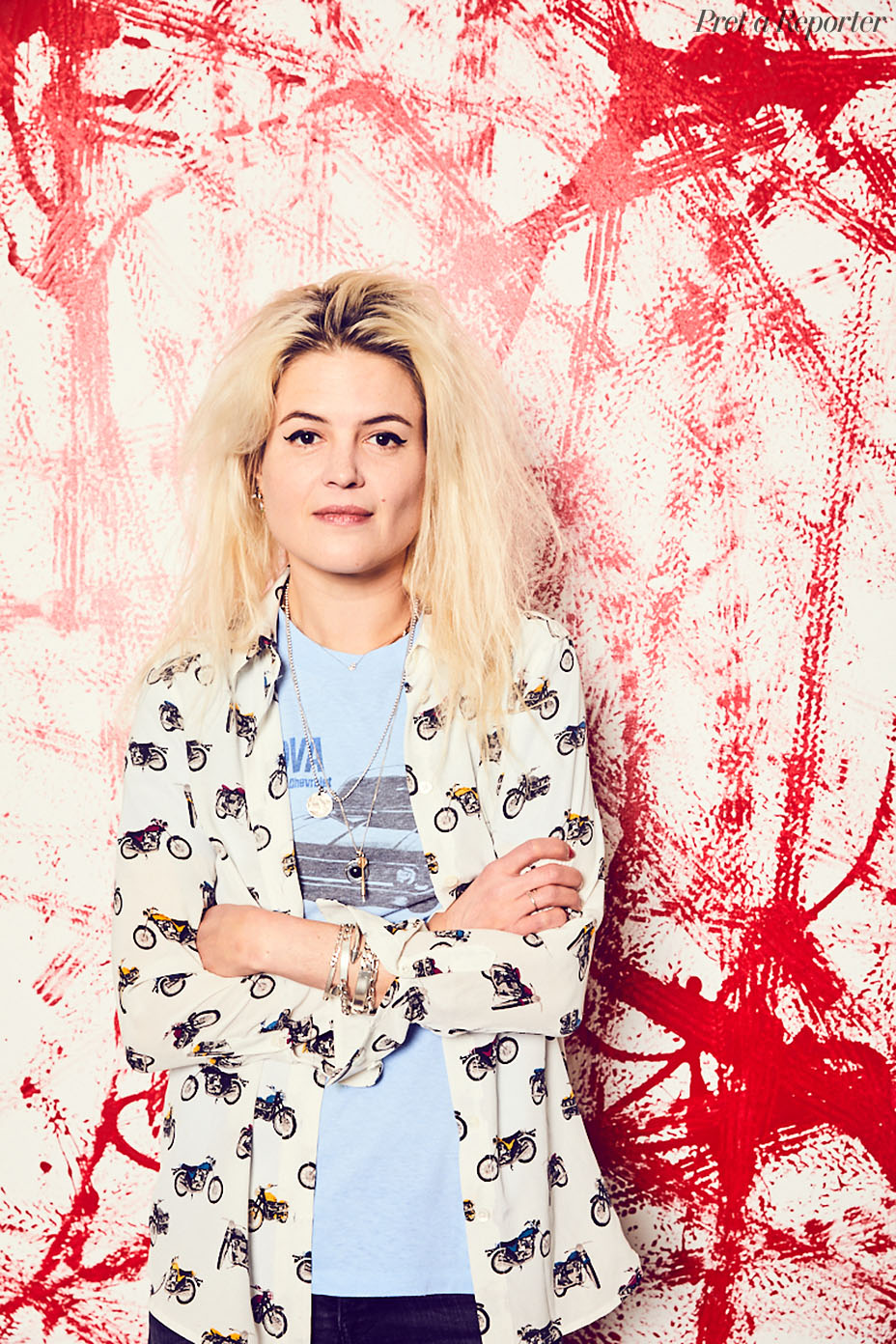 It’s just what I like. I don’t know if I have one, it’s just me. It’s a mix of my life and history and what I am interested in.

What’s a typical off-duty look for you?

I pretty much live in T-shirts, jeans, boots, leather jackets. 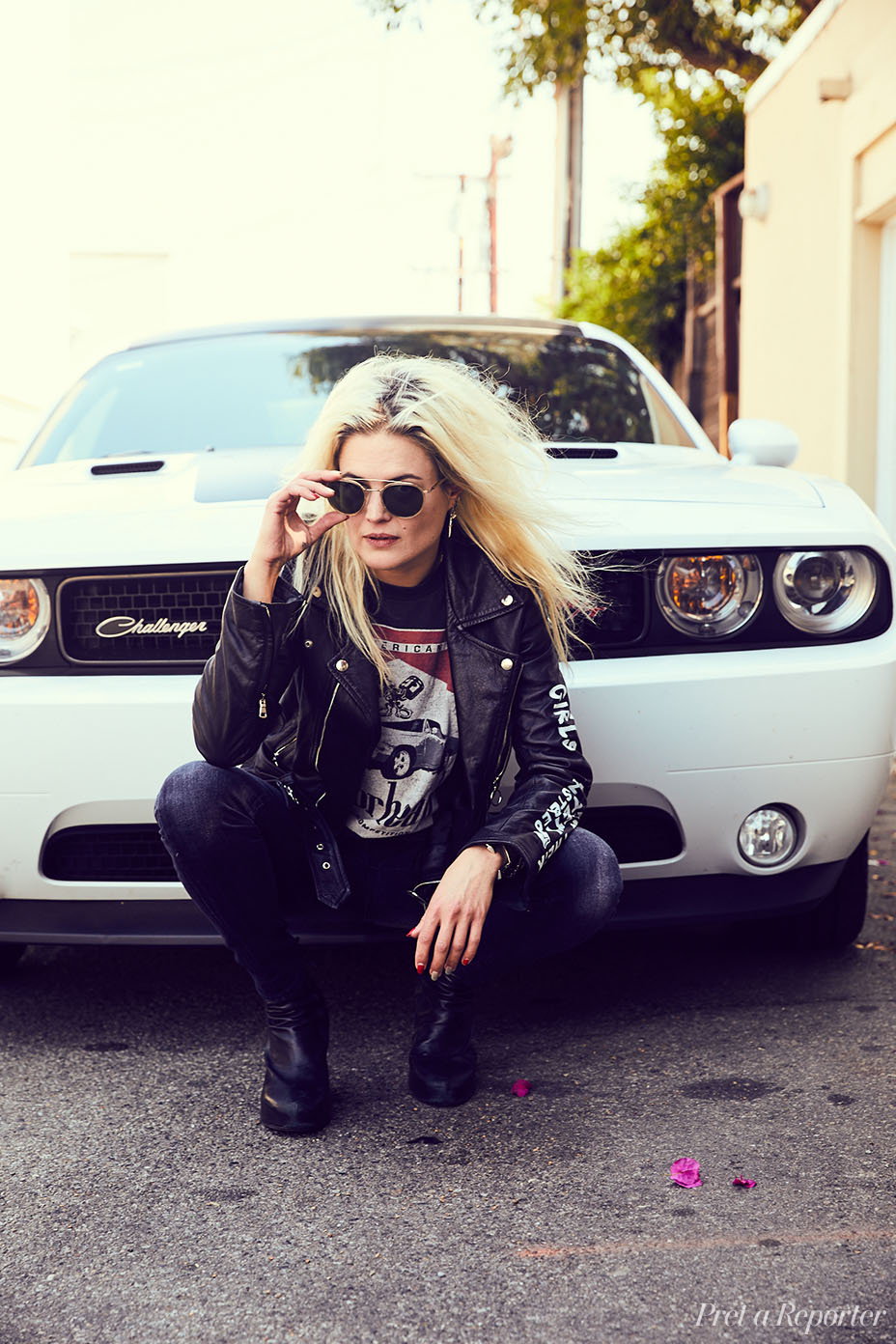 Do you have any go-to pieces you like to perform in?

I wear R13 leather pants that change into denim. Everyone thinks I am wearing insanely high boots which is really funny. It’s an optical illusion. They’re the best pants. I pick clothes that I can dance in and move in really easily and try not to destroy. Those are my favorite. So I wear those with an Equipment shirt, one of the 600 I’ve got.

What’s your packing strategy when you go on tour?

I make a packing list. I bring leather pants, one pair for every three gigs because they get really fucked up. And then I bring vests to go under my Equipment shirts, and then that many Equipment shirts. They all have about a three-wear lifespan then I have to dry-clean them. I look like a drowned rat when I get off stage. 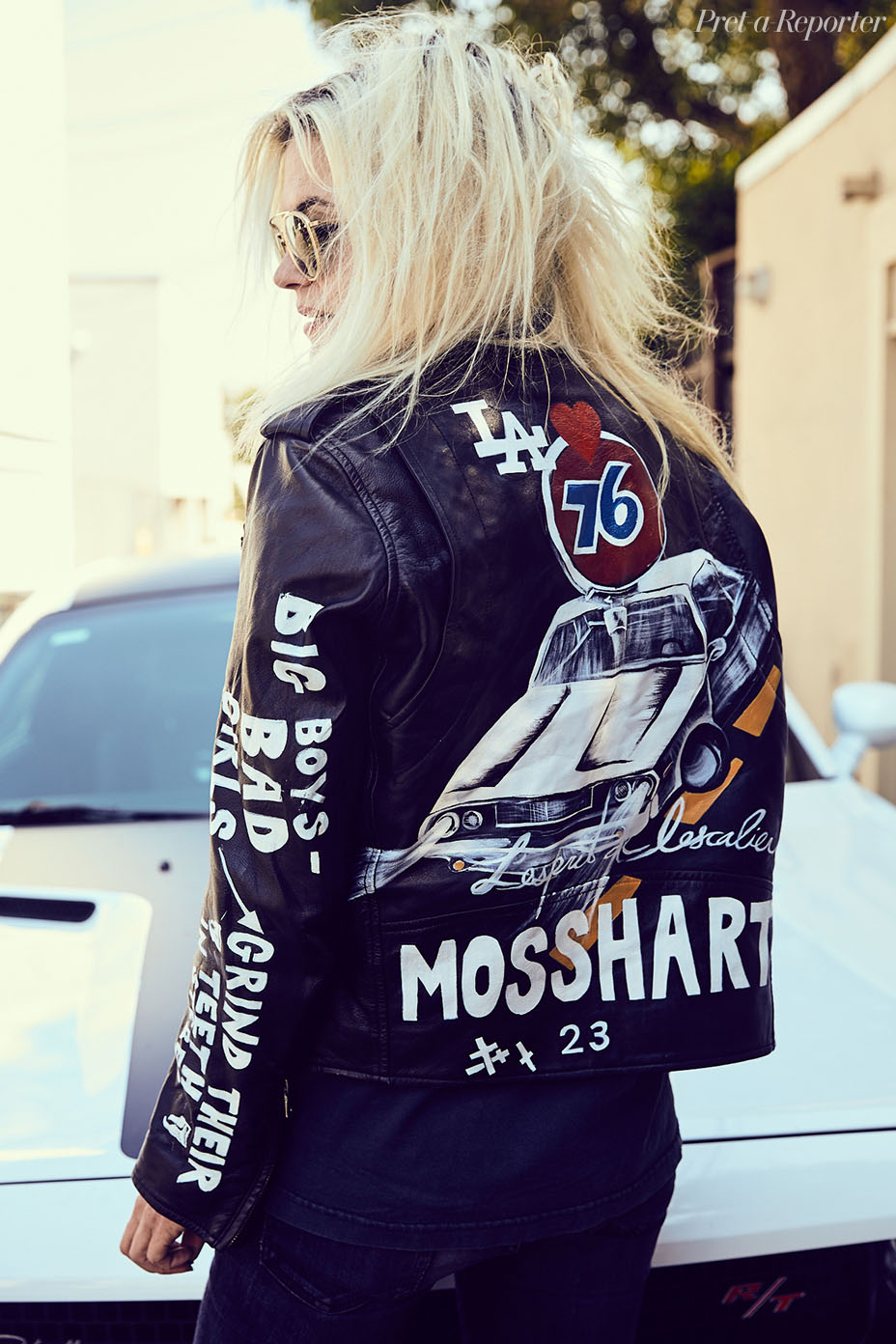 Are there any pieces in your closet you’ll keep forever?

All my leather jackets. I have about 80 of them. All my Saint Laurent and Dior jackets from when Hedi [Slimane], and all my R13 leather jackets. My friend Romulus [Von Stezelberger] who had [the now shuttered line] South Paradiso is a leather worker. He made me these custom jackets that are so beautiful. Leather jackets last your whole life, and then you pass them on. You never throw away a leather jacket.

Where and when do you shop for clothes?

I don’t really shop much. I don’t have time. I used to but I don’t anymore. I usually wait to shop when I get back to L.A. or New York or London. I don’t buy clothes in Nashville. I have been living there for six years and I don’t know where to shop. That’s how much I love shopping. R13 and Equipment send me literally everything I need. I’m really lucky.

Do you carry a handbag?

I went through a couple of years recently when I didn’t. I looked like a safari person because I would start buying clothes that had so many pockets and they would just be [stuffed] with, like, two packets of cigarettes, a lighter, a wallet — everything was just hanging off my person. I finally found a bag I really liked. It’s a Valentino Rockstud bag. I was like, ‘‘I really like that bag. I haven’t bought a bag in eight years. I’ll treat myself.’ I love it.

One of the bracelets you’re wearing is engraved with the words “Black Shark.” What’s the story behind it?

That’s my car in Nashville. It’s a black 2013 Dodge Challenger that I had custom built for me. It’s really fast. It’s beautiful. It’s my pride and joy. I grew up around cars; my dad is a used car dealer. I am obsessed with cars, and living in London is the worst place ever if you’re obsessed with them because you don’t get to drive them. I tried once, for five minutes, and I freaked out. In L.A., I have the same car in white. My one [in Nashville] is a year older and a lot faster. I don’t have [a bracelet] for the White Shark yet, but I will get one. 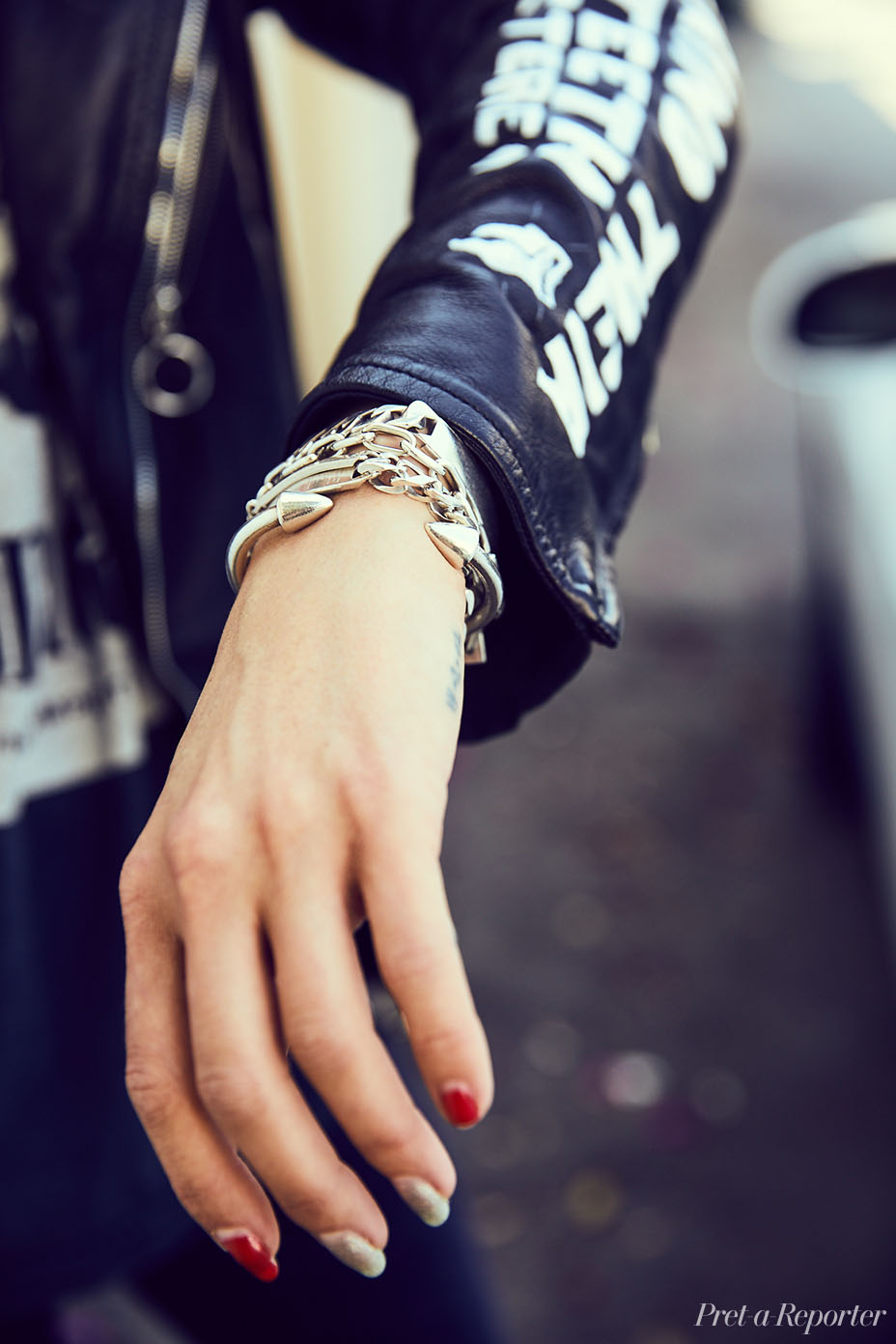 Where and when are you most inspired? 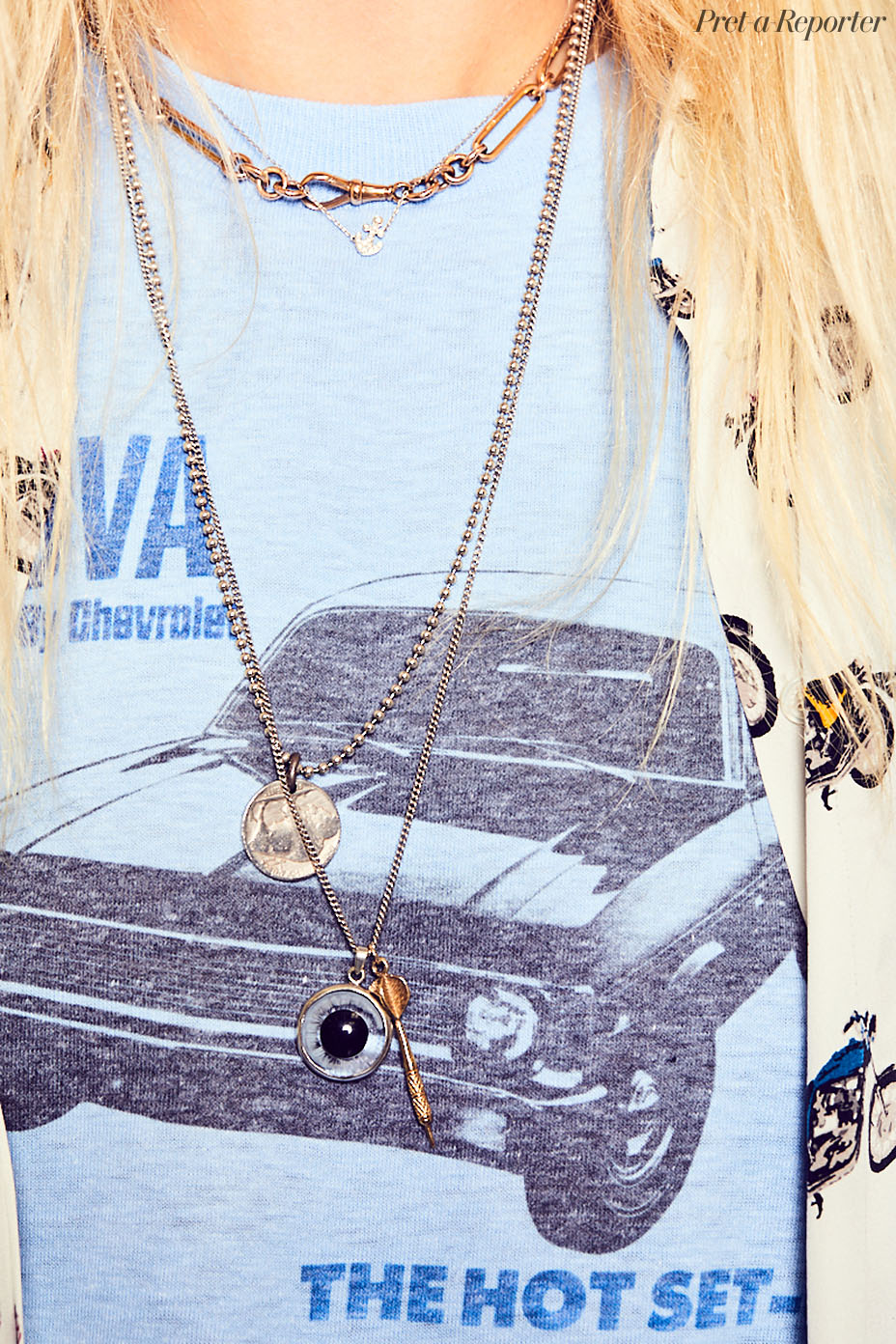