When it comes to makeup, Kim Kardashian West has a few signatures: an elaborately contoured and highlighted face, smoky eyes and glossy nude lips. She also has a secret weapon: makeup artist Mario Dedivanovic. To mark the occasion of their 10-year work-iversary, the duo has teamed up to create a limited-edition makeup collection for West’s KKW Beauty brand.

The KKW x Mario capsule line (a $20 peachy-nude creme lipstick, two $18 high-shine lip glosses, and a $45 eyeshadow palette with four matte and six shimmery colors) landed on kkwbeauty.com today, a reminder in case you missed the string of Insta teases that started March 26, when Mario made the news official.

While KKW Beauty clearly has the contouring/highlighting game covered, this collab marks the first introduction of eye color and lipstick to the brand. Dedivanovic also stars as a judge on the Kardashian West-produced Lifetime beauty competition reality TV series “Glam Masters” and counts Naomie Harris, Kate Bosworth, Gabrielle Union as clients. We caught up with him to talk about his decadelong partnership with one of the world’s most visible and style-influential women.

You mentioned on Insta that Kim designed the packaging. How did you two collaborate?

When I thought of a collection for Kim and Mario, I wanted it to be something that sums up the Kim Kardashian look and, when you think of that, it’s her eyes and her classic nude lip. Even before she started her makeup line, Kim told me that she wanted her first collaboration to be with me, so I started collecting inspiration, going through thousands of old images over the past decade and choosing looks that were really popular and looks that she and I loved a lot to put those key shades (from the crease, inner corner and brow highlight) into the eye palette. I’m a Libra, so I’m extremely indecisive and it was so hard to narrow down the colors. Then I worked back and forth with the lab, refining the shades and formulas. Kim was really open to letting me do my thing when it came to that. Obviously, she approved everything. And she did all the packaging on her own. She has a really clean, minimalist aesthetic that I love and she surprised me by using gray, my favorite color. We were originally going to launch this past October, which is our birthday month [West’s birthday is Oct. 21 and Dedivanovic’s is Oct. 2], but I had to extend it because I wasn’t ready. I wanted to keep changing the formulas, so we did. We added the blue that everyone’s kind of shocked about and I love it.

The addition of color is so new for the KKW brand.

Yeah, for sure. Kim hasn’t always been open to using color, but we have used purple, green and blue lots of times, and we’ve had some real moments with blue. She initially was so hesitant, so I started out with a soft baby blue in 2009 that she wound up loving. Then I did a navy blue that she said no to originally but then loved so much. I wanted to include a blue because, like Kim, I know that most of the girls or boys or whoever out there are hesitant to use color. Even I don’t get to use that much color because most of the celebrities I work with don’t want to. So I thought maybe it would inspire people to pick up a color and try it one day, to do a light wash around the eye or use it as a liner or put a little bit in the crease. 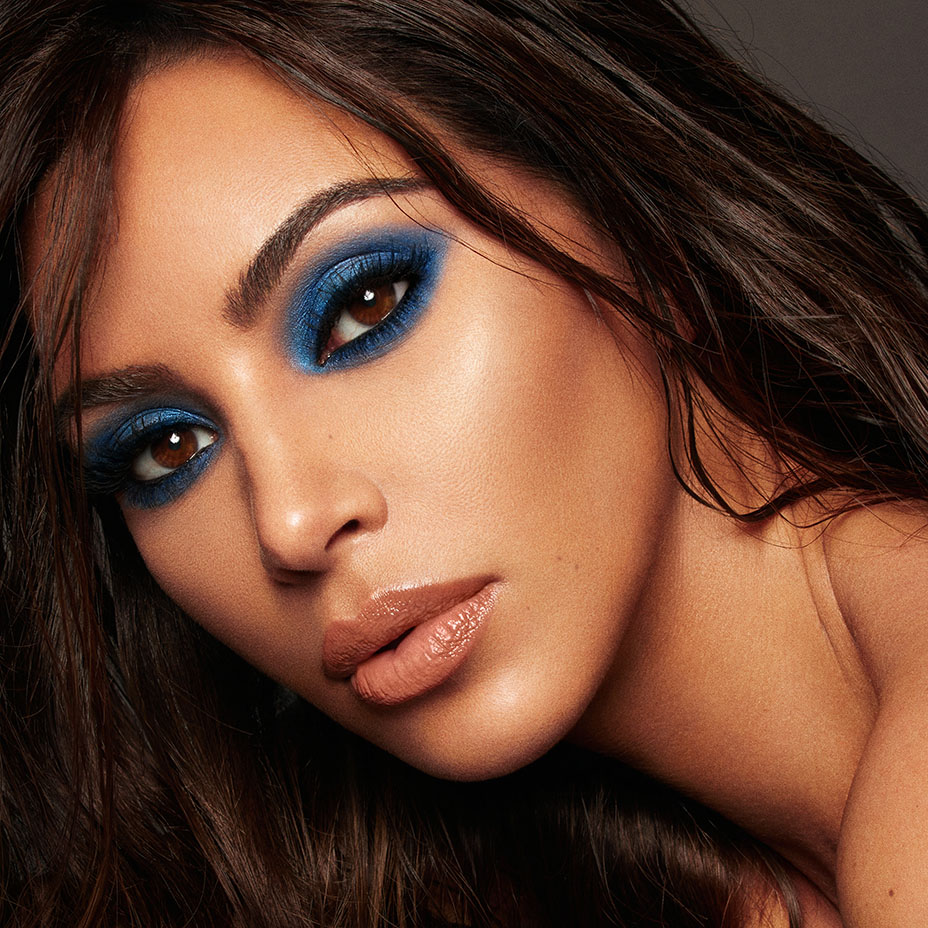 Can you talk to the significance of some of the shadow names?

All the names definitely have meaning to both Kim and I. “Glam” is because Kim is known as the glam girl and, when she came around on the scene with me, the whole glam makeup thing was reborn. She loves the process of getting made up into a glam girl. “Armenian” (a yellow gold I chose because it’s one of the colors in the Armenian flag) is because Kim’s Armenian and she loves to look Armenian and ethnic. She’ll say, “Make me look ethnic.” I feel like that was one of the reasons that she really loved my makeup so much is that I made her feel ethnic and kind of like herself. I’m Albanian and it’s such a huge part of who I am, so I chose the most red shade for that hue because the Albanian flag is red and it’s also my favorite. “Miami” and “Vegas” are because we’ve had so many favorites looks and spent so much time there together. And then we have “Libra,” which is the blue, since Kim and I are both Libras and that’s our stone color. “Bronzy” is because if there’s any word that Kim and I have used the most in the last 10 years, it would be “bronzy.” She literally says it every time we do makeup. “Can I have a bronzy look? Can I have a bronzy eye? Can we do a bronzy smoky eye?” And she loves to be bronze. “I feel too pale. Can you use more bronzer?” I always tease her about that. She literally says it every day.

Do you like our eyeshadow names? #KKWxMARIO each one has a personal meaning to us.

Tell us about the lip products.

Since I became a makeup artist 18 years ago, and for long as I’ve worked with Kim, I’ve always had nude lip palettes with maybe 24 colors in them. I would dip my brush into a bunch of them and I was basically always creating the same color, almost unconsciously. So I sent it to the lab to re-create as a lipstick that’s a creamy, satin formula. And I always like to mix two gloss colors: A peachy sheer and a super-nude flesh tone that has a little bit of a gold fleck in it. The lipstick works with any skin tone but a nude lipstick by itself doesn’t work on many people, so you have to use it over a lip pencil in any shade from super natural to the deepest of colors like plummish or brown. I use so many, it depends on how dramatic I want the lip to look. My favorite pencils are by MAC, Kevyn Aucoin and Laura Mercier [Dedivanovic is in the Laura Mercier Makeup Artist Collective]. I was the lead artist on the shoot for the KKW concealer kits and I had all my assistants use samples of this one lipstick with any lip pencil they wanted on the 13 models, whose skin tones ranged from the palest of pale to the deepest of deep, and it looked beautiful on every single one.

13 girls, 1 lipstick. For this shoot I had 4 Makeup artists on my team and I gave each one the new #kkwxmario lipstick in ‘classic K’ and the 2 lipglosses. I had them use the lipstick/glosses on all 16 models and told them to pair it with their lipliner of choice to best suit each model. It works and blends beautifully into all liners and all skin tones. I usually use it with a liner that is 2-3 shades deeper and top it off with either gloss. #MakeupByMario

What are some all-time favorite looks you’ve created for Kim?

One of my and Kim’s favorite images on my inspiration board is a look that we did during Super Bowl weekend in Miami in 2010 when she was wearing a peach fringy outfit to a party [pictured below]. It went viral. Another is when I used the blue shadow on her and she had a red lip. And there was one time back in the early days when she had on a tight white dress with Old Hollywood hair and we did a matte vanilla eye with a brown crease that inspired two of the palette shades. To be honest, it was so emotional for me to go through all the images. Wow. In general, I’m an overly emotional person. I forgot how much we had done together. And I was reminded of where we were, what we were doing, how I got there, what we talked about, what she was wearing. It’s crazy. I spent so much time with this individual and really grew up with her, you know? 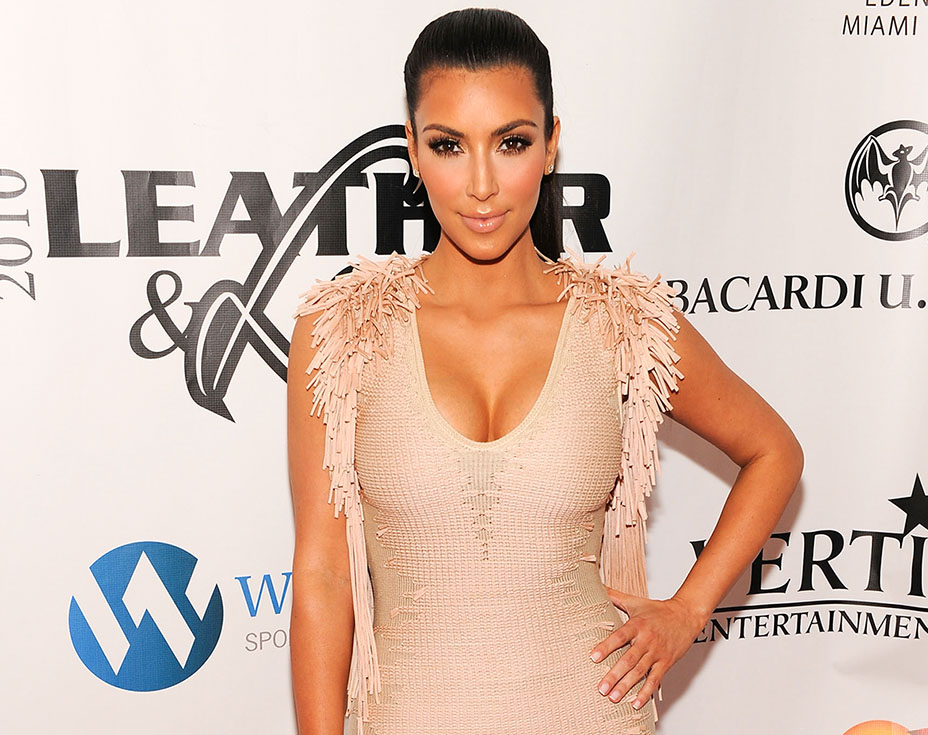 How would you say Kim’s beauty look has evolved and has anything stayed the same?

We’ve changed our makeup style and the amount of makeup –going from heavier to more natural to supernatural and now back to a little bit heavy and the amount of lashes or lack of lashes that we use now – but throughout all of that what has remained constant is her love of contour. The nude lip has been pretty consistent, as well. I think it was heavier and more opaque in the earlier days and now it’s more sheer.

Is there anything you’ve been pushing Kim to try without much success?

She doesn’t like bright lips or colorful lips or dark lips. That’s something I’ve tried over the years so much and have never had success. But you never know. Maybe this summer we’ll try something.

What’s the most unexpected product or trick in your bag?

I do use one strange product that everyone’s kind of weirded out by. It’s a special effects product called Sweat Effect [by Kryolan] created to make actors on film look really sweaty for film and TV scenes. I use it sometimes on the shoulders, collarbone and the top of the cheeks to add a really natural, beautiful glow.