Ava Gardner’s black velvet Orry-Kelly gown from 1948’s One Touch of Venus, a blue pinafore Judy Garland screen-tested in for 1939’s The Wizard of Oz, and a gold lamé gown once belonging to Jayne Mansfield rank among the more dazzling items from Wednesday’s “TCM Presents … Lights, Camera, Auction!” event at Bonhams in New York.

But a simple gray suit promises to steal the show.

Worn by Kim Novak in Alfred Hitchcock’s Vertigo, the Edith Head-designed wool suit has captured the lion’s share of attention in the days leading up to the auction, which kicks off at noon Wednesday. “It’s so recognizable, and that’s something we look for when we sell costumes,” says Catherine Williamson, the L.A.-based director of Fine Books & Manuscripts and Entertainment Memorabilia for Bonhams Auctioneers. “If people can look at it and immediately recognize the costume and its film, that definitely adds value to the piece.”

The two-piece, single-breasted suit, highlighted by turned-up cuffs, five covered buttons and a pencil skirt, plays a pivotal role in the 1958 film; so how did such an iconic piece of cinema fashion remain undiscovered for almost six decades? The answer isn’t surprising, says Williamson. “When so many studios liquidated their costumes and props in the ‘70s, they concentrated on the historical and highly unusual items for their own high-end auctions,” she explains. “The contemporary pieces—suits, cocktail dresses and daywear—ended up in tag sales. You could go to a hangar at the Santa Monica Airport and buy things for $3 or $5. This suit likely slipped through the cracks that way by someone who didn’t recognize it.” 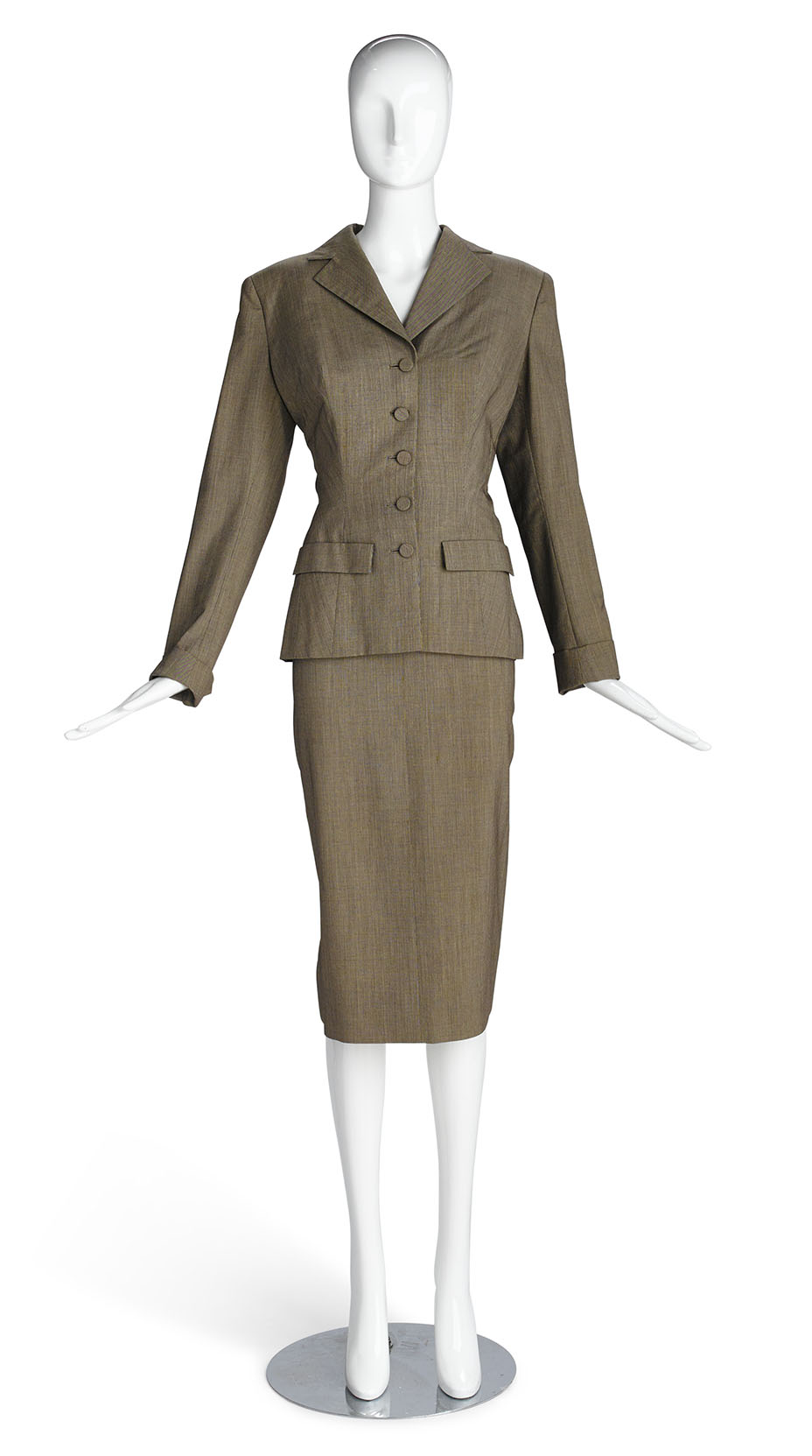 The current owner discovered the suit in an L.A. vintage store and bought it simply because she liked it, says Williamson. “Some time after that, she pulled it out of her closet and discovered it didn’t fit, and only then did she look at the label,” she adds. Both pieces feature a Paramount Pictures label; the skirt’s label also is inscribed with “Kim Novak” in black ink. “It was the owner’s husband who said, ‘I think that’s from Vertigo,’ and they brought it to us,” says Williamson.

Part of a two-day event that kicked off Tuesday with the estate of Maureen O’Hara, Wednesday’s auction features a variety of items sure to fetch much higher prices—that Wizard of Oz pinafore, for example, carries an auction estimate between $100,000 and $150,000. But Novak’s Vertigo suit is notable for its contribution to fashion and film alike, and has been reinterpreted over the years by everyone from Ralph Lauren and Michael Kors to Dolce & Gabbana. “It’s a classic, perfect suit, timeless and yet very much of its time,” says Williamson.

Patrick Meade, co-CEO of Bonhams, agrees: “The style of Kim Novak and Alfred Hitchcock, everyone can recognize. Films are an essential part of our history, and the items you see here tell stories that resonate with each of us.” With that in mind, expect these auction partnerships between Bonhams and Turner Classic Movies to continue. “Like contemporary art,” Meade adds with a smile, “there’s just a bottomless pit of supply.”