Stylist Tara Swennen has one mission when collaborating with longtime client Kristen Stewart: “Make sure she’s comfortable and feels authentically herself.”

The two have put that aesthetic on display during the Cannes Film Festival for years now by turning out a slew of chic ensembles almost unanimously in Chanel, the luxury house for which Stewart has been a beloved muse and ambassador. Ahead of her anticipated return to the Palais this year (for David Cronenberg’s body horror film Crimes of the Future and Olivier Assayas’ TV series Irma Vep), THR caught up with Swennen to get the scoop behind some of her most memorable looks that are undeniably Stewart. “I really love that she is the juxtaposition to a lot of what you see on the carpet.”

Swennen said it’s “truly an honor” to style Stewart in Chanel in Cannes, particularly during the festival where they always try to weave in references to the arc of the movie she’s in town to promote. “We like to have fun in Cannes,” she says of her client, who just may show up on Monday wearing a dress that was originally picked to be an Oscar night look. “I love finding new ways to dress something up that a lot of people wouldn’t normally see as that dressy.” 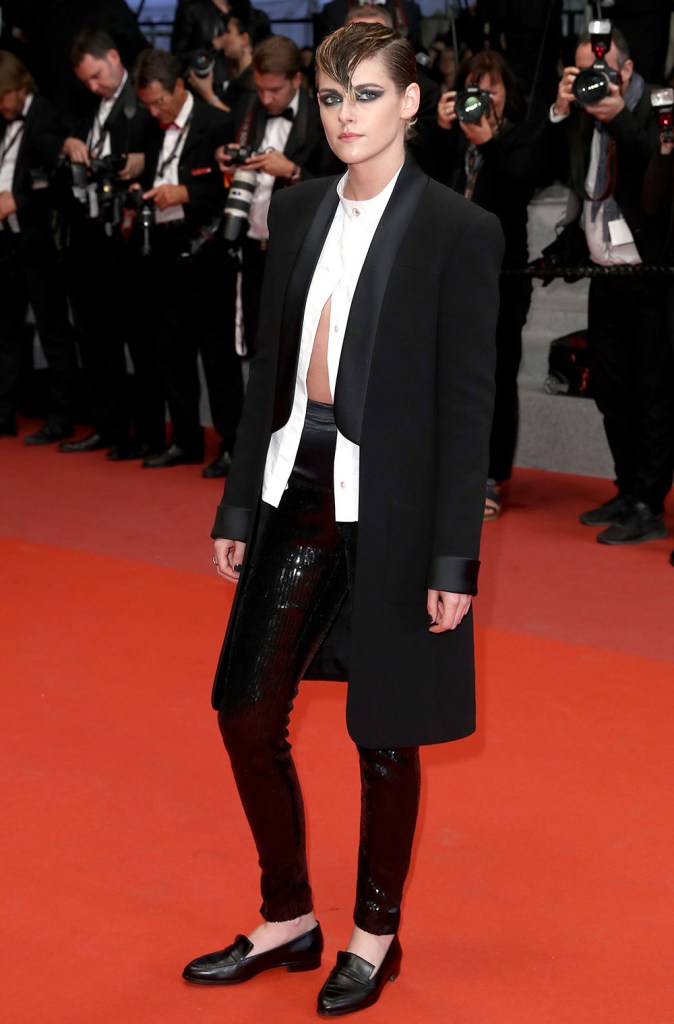 2018 “This was Frankensteined from a bunch of different looks. We fell in love with the jacket first and pieced together the rest from there. Once we found the sequin pants, we loved them because they dressed up the whole look. We also loved the idea of flats. Everyone would’ve expected her to do a heel but, to me, what made it unique to her was the choice of shoes [by Sarah Flint]. What really made this look come together was the glam. [Artists] Beau Nelson and Bridget Brager were on that year and what they did was so spectacular and cool, really edgy and fun. I love the way the hair comes down in the face in a perfect wave. This is honestly one of my top three looks from Cannes because it really speaks to who she is. As everybody knows, Kristen’s never really going to do insane ball gowns, so it’s about finding that perfect balance.” 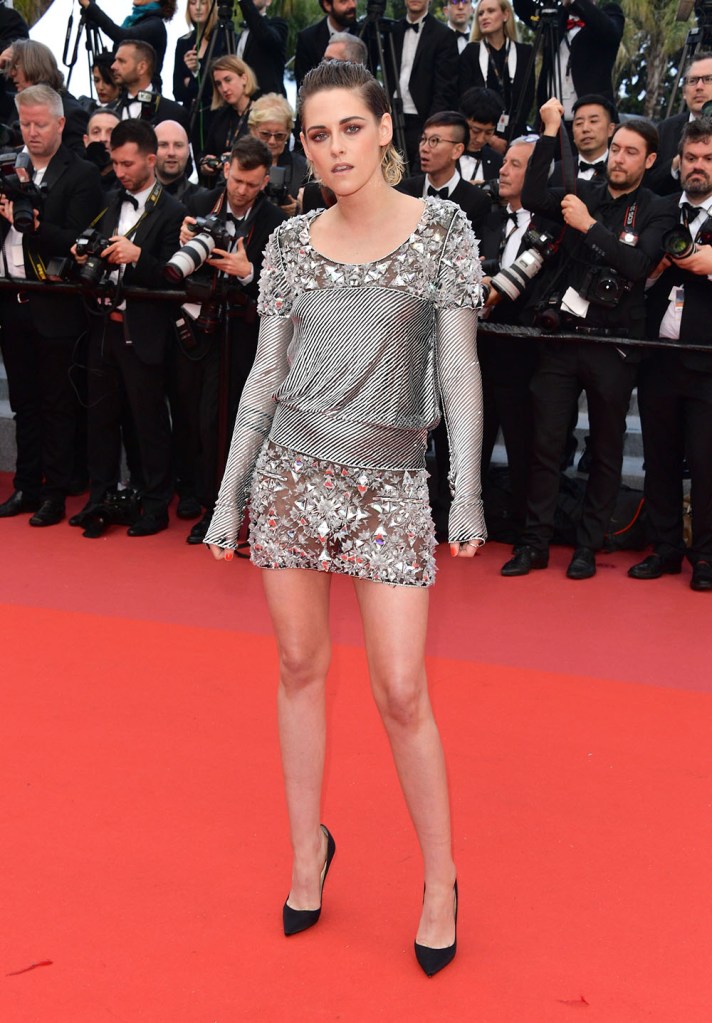 2018 “This look came together last minute as she wasn’t originally going to go to the premiere of [BlackKklansman] so we needed something to wear. Chanel has a suite in Cannes and a French actress was in a fitting. I saw this out of the corner of my eye and I literally asked to take it from her fitting: “Are you done with it? If you are, I need it now.” It was a floor-length gown and we opted not to use the skirt. In a very traditional Kristen way, we altered it to make it uniquely hers. Thank God it was a perfect fit so we slid it on and she was out the door. I liked the Joan of Arc feel and intricate beading. It was quite stunning in person.” 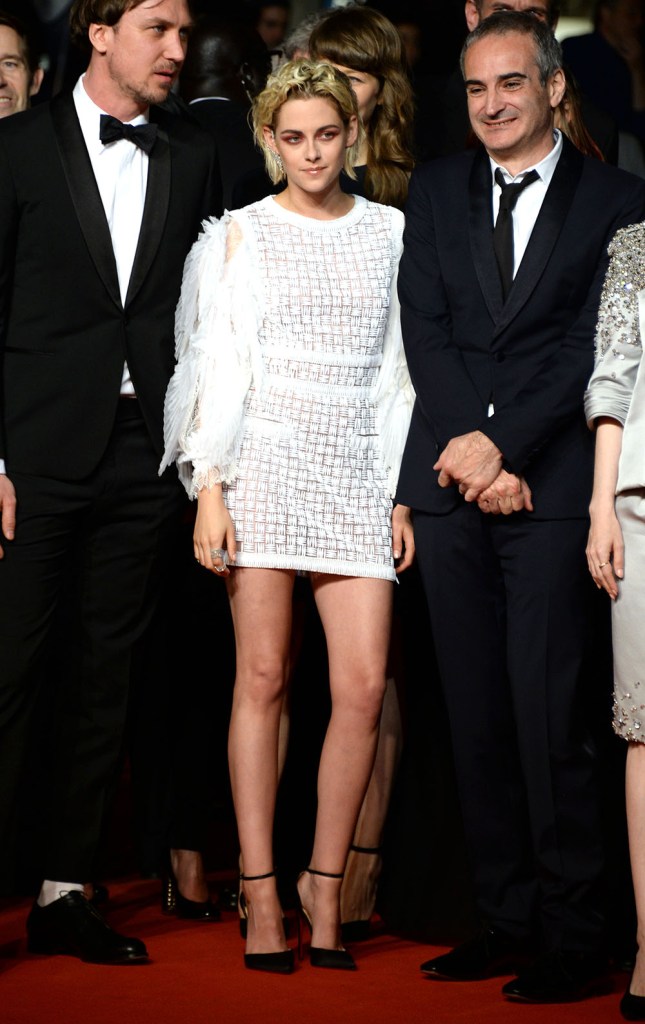 2016 “This is one of my all-time favorites. It came from one of the last few shows that [Karl Lagerfeld] did, and it took place in Cuba, right after they’d reopened so there was an amazing vibe. From what I heard, the dress was modeled after a Cuban cigar with tiny, tiny rolled beads that are supposed to be baby cigars. The sleeves are meant to be the leaves. I love the storytelling and I fell in love with the piece immediately and grabbed it very quickly for her. It’s airy, light, beautiful and romantic. We paired it with a very high and very sexy Christian Louboutin heel. The glam was also very unique — by Kate Lee (makeup) and Adir Abergel (hair) — done using Coco Chanel makeup. I never would’ve thought of that red color, and it was a very cool pop of color. She paired it with a Messika cuff. It was one of the few times that I’ve gotten a major piece of jewelry on her ear as she doesn’t wear jewelry that often.”

2016 “This came from the same Chanel Resort collection from Cuba. We love to push the limits a little bit, and I loved the idea that it was sheer with no underpinnings; just really sexy and cool. The green was a color she’d never done before and I love how [the glam team] juxtaposed a red lip with the look. It’s timeless yet edgy and very her. Again, as you can see, this is about as close to a gown as she’s going to get, but it still has a lot of unique, interesting detail with the pleating, transparency and embroidery. It’s quite divine.” 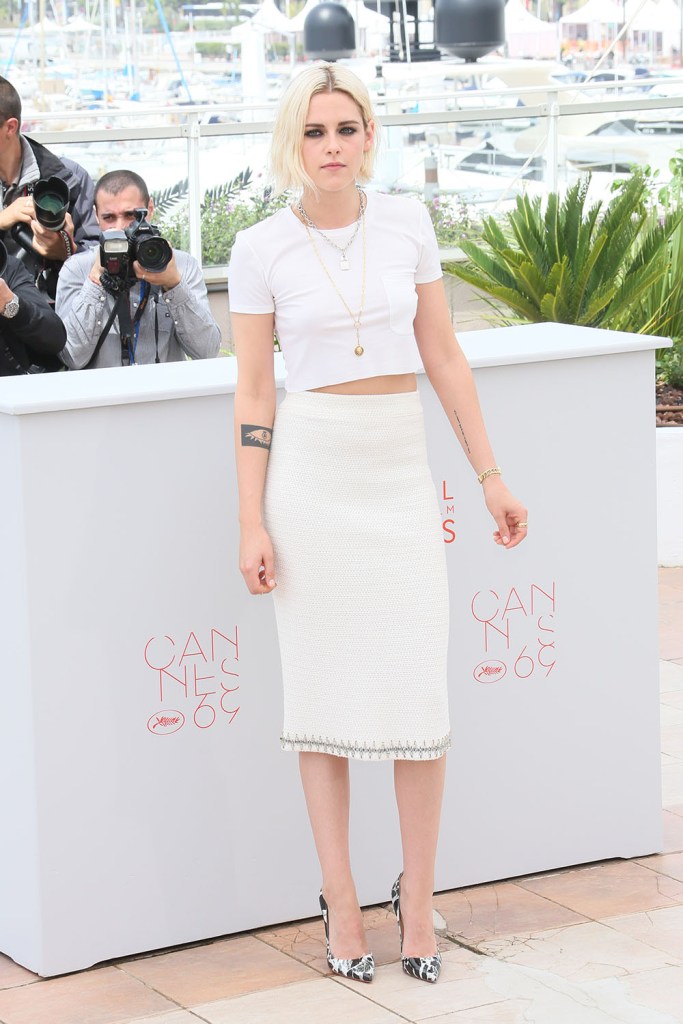 2016 “This was another look that came together last minute. I had them run to the Chanel boutique on the [Croisette] and they brought this t-shirt back. But I said, “I need to cut it. Is that OK?” There was some uncertainty whether it was OK but we cut it. Karl was always so gracious about letting us make things our own. I love how fun, playful and cool it is. For some photo calls, she’s done suiting and other looks but this was very chill for Cannes.”