Evan Funke heard a familiar sound one recent evening at Felix in Venice.

“A director friend of mine was doing a pitch for a movie on the patio,” he recalls of the scene at his critically acclaimed restaurant, where he serves as chef and owner. Conversations like that have become increasingly familiar of late as the industry’s power-dining landscape repopulates with creatives, executives, representatives and talent. Public health guidelines that allow for indoor and outdoor dining, along with widening vaccine distribution, have made it possible for insiders to begin venturing out for business meals after a year of hibernation amid the COVID-19 pandemic.

But while the activity might sound the same, it still does not look normal. “It’s definitely a scene again,” Funke continues, “but it’s eight feet apart between tables now, so it’s a more subdued energy.”

A scan of the available reservations at the Beverly Hills Hotel’s Polo Lounge confirms that business is back. On consecutive days in late March, there were no open tables from 11 a.m. through 2:45 p.m., with prime 1 p.m. reservations fully booked. GM Edward Mady says the long-favored industry hotspot has seen an increase in dining since it reopened in February according to Los Angeles County Public Health directives. 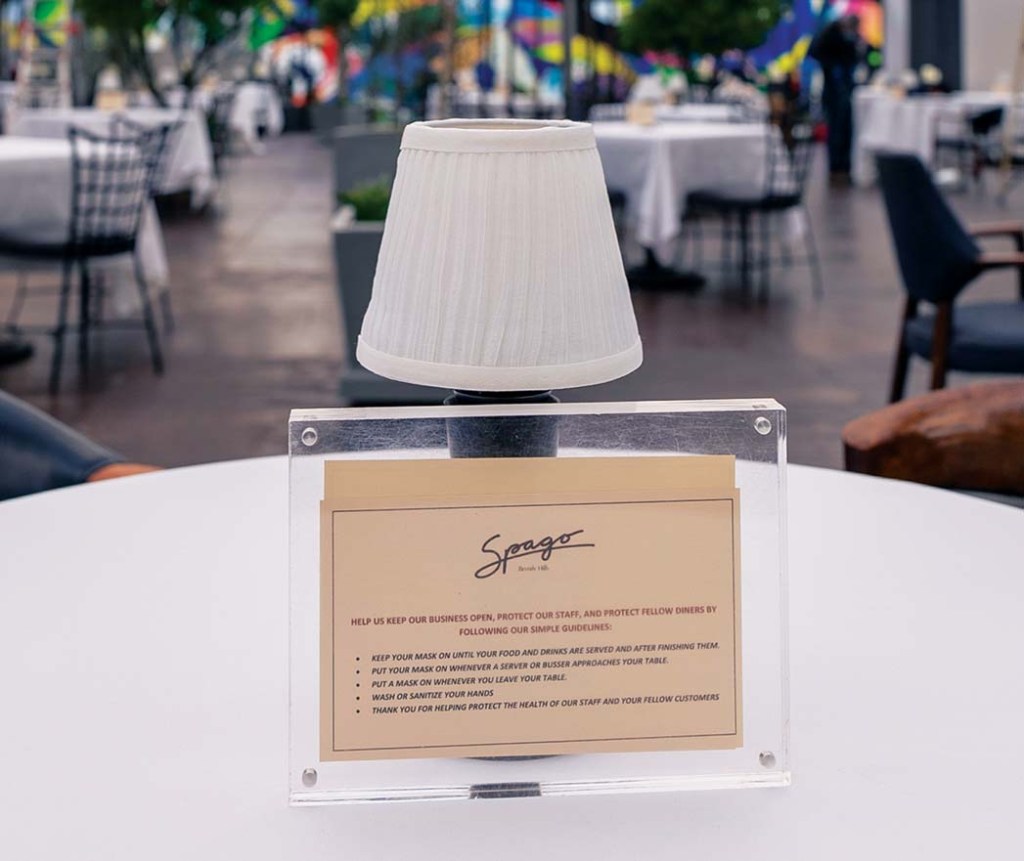 Perhaps because of chilly temperatures, it took some time for clientele to return to its famed terrace in full force, “but by March, we were seeing business levels that we hadn’t seen since pre-COVID,” Mady says. He adds that they’ve created an extra seating area in the Polo Garden as well as extended patio seating onto a “Polo Private” patio, a newly designed event space just outside the Polo Lounge’s main courtyard. “Industry players are looking for a safe, intimate and beautiful setting to conduct their meetings,” he says, “and that is exactly what we are able to offer them.”

The heart of the Beverly Hills dining district awaits the return of a key customer base: Many major agencies, management firms and production houses are eyeing a post-July 4 return to their headquarters, with some expecting not to reach full in-office capacity until September. In Culver City, Sony Pictures Entertainment confirmed that it will welcome employees back in June, while WarnerMedia has revealed a September date for its Valley homecoming.

Veteran producer Mike Medavoy, 80 and fully vaccinated, says he’s taking business meals — but mostly on weekends and mostly on the Westside where he lives, either at Brentwood Country Mart or at one of his favorite haunts in the Pacific Palisades. “I haven’t ventured into Beverly Hills yet — that robbery and other stuff going on in the area has been scary,” says Medavoy, referring broadly to recent political unrest (stemming from anti-vaccine and police brutality demonstrations) and to a March 4 incident outside Il Pastaio during which a woman was shot while dining out with two companions when one of them was targeted by three suspects over a $500,000 watch. In an attempt to restore confidence in the neighborhood, Beverly Hills Police Chief Dominick Rivetti confirmed that armed, private security guards will be deployed to the area: “I want the world to know that Beverly Hills is a safe community.” 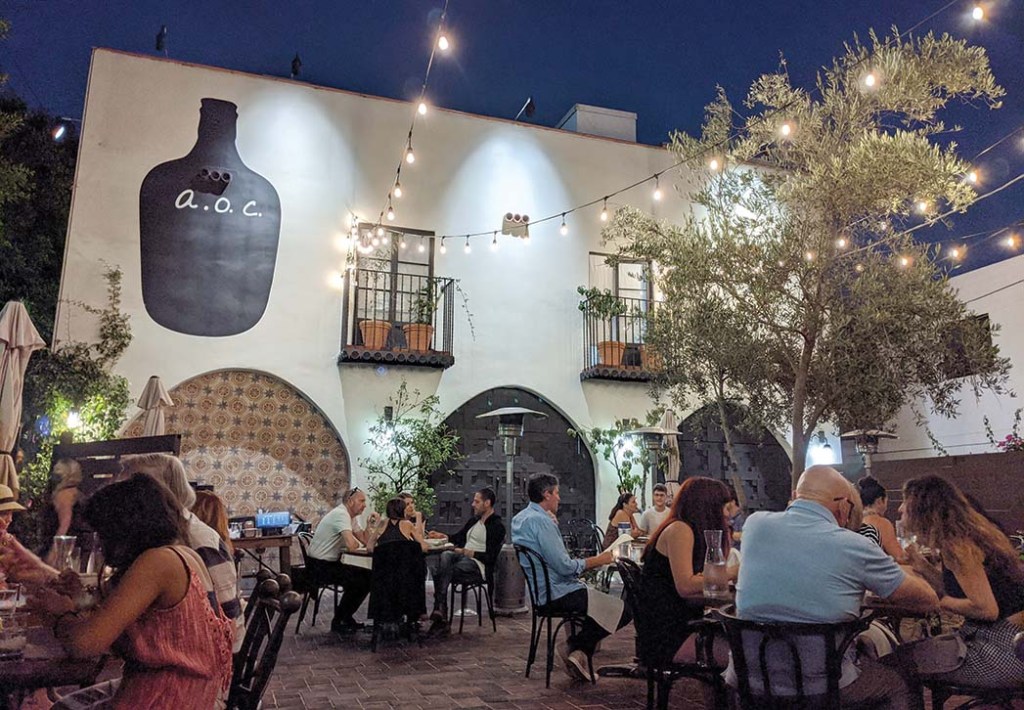 Crime aside, Medavoy says he feels safe and encouraged to sit down with peers again after an extended quarantine. “People want to get out and socialize, there’s no question about it,” Medavoy observes. “What’s great about this is that it was solved [with vaccinations] faster than what most people ever would have thought.” Still, Medavoy predicts it will be late summer before real normalcy returns.

In March, L.A. County allowed indoor dining at 25 percent occupancy; on April 5, capacity limits were upped to 50 percent. “It’s slowly starting to come back, where dinner meetings are starting to happen, and you start to see the regular characters return,” says Craig Susser, owner of industry favorite Craig’s. “It’s a little like getting your sea legs again.” He pauses before musing: “We don’t do well when we’re isolated; we’re a social animal. Personally, I’ve missed the energy. During the pandemic, I’ve stood in the middle of the dining room and closed my eyes and [dreamed of] customers greeting each other and busboys moving around.”

Funke echoes Susser’s sentiment: “For a year, with to-go, we’ve just put food in bags. That’s not why we do this, as restaurant workers. We crave interaction: seeing the smile on someone’s face. That’s the reward for putting up with the significant amount of bullshit we put up with.”

For restaurateur Caroline Styne, Hollywood’s inching return to its offices has factored into gauging when she’ll reinstate lunch service at her flagship A.O.C. near Cedars-Sinai, as well as a new Brentwood offshoot that will replace her Lucques Group’s pre-pandemic Tavern location. “I think [business dining] is a big indicator of recovery in general,” she explains. “That’s the big cliff you step off of: going out with a colleague or a stranger, taking off your mask and dining with someone you may not know.”

Yet Styne — an advisory board member of the Independent Restaurant Coalition, whose federal lobbying helped secure March’s $28.6 billion in relief for small hospitality businesses reeling from the pandemic — remains decidedly bullish. She and her partner Suzanne Goin are scheduled to open a pair of new places, Caldo Verde and Cara Cara, at the Proper Hotel in downtown L.A. beginning in May.

Wolfgang Puck, who debuted two new restaurants at the Pendry West Hollywood on April 2, has invested $350,000 in an elaborate outdoor dining pavilion right on Canon Drive in front of his flagship, Spago Beverly Hills. The modular structure, which includes slotted walls and vented semi-private seating areas, will allow the restaurant to accommodate government restrictions as they continue to wax and wane — an eventuality the chef anticipates at least throughout the remainder of 2021. “We have people like John Legend and Joan Collins back again,” Puck says of Spago, “and they’re so happy to have this kind of space. It makes them feel safe.” 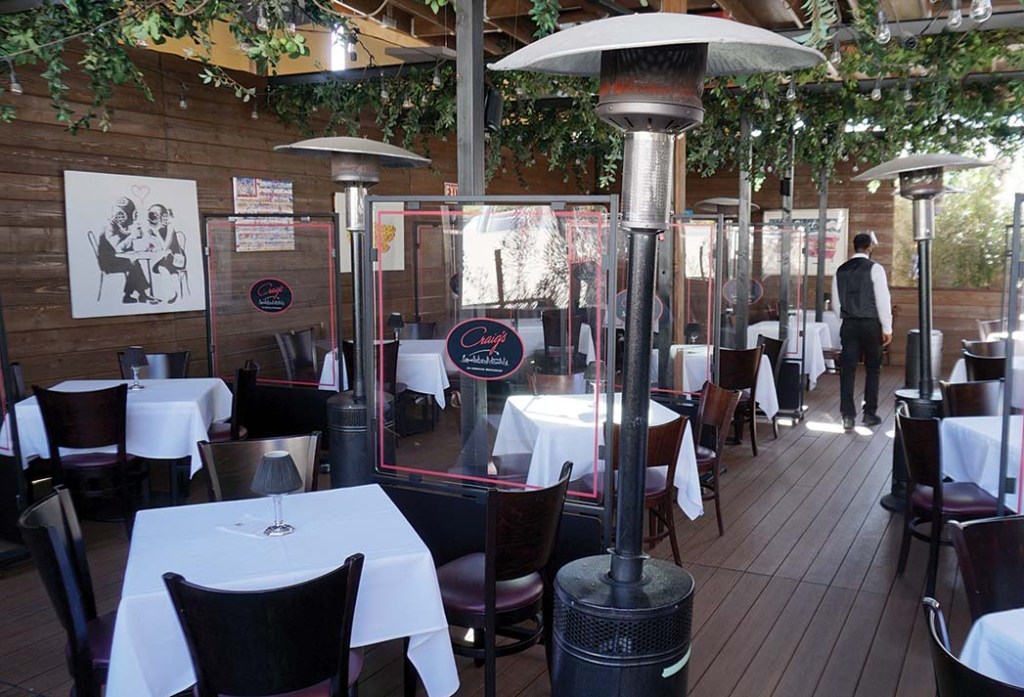 As Angelenos begin to make the rounds on the power dining scene, New York seems to be ahead of the curve. In conjunction with public health guidance, Gov. Andrew Cuomo announced that indoor dining could resume as of Feb. 12. And in late March, the state pushed forward with another phase of vaccine eligibility, allowing anyone age 16 and over to get vaccinated as of April 6, nine days ahead of California.

Because of that — and comfortable spring temperatures and sunshine — industry professionals in and around Manhattan have been out in droves. UTA’s Nancy Gates, a partner and co-head of TV talent, tells THR that she’s eyeing Café Luxembourg, one of her favorite spots. “Zoom has been an unexpected gift over the last year, but nothing can compare with in-person interaction.”

Not everyone, however, is requesting that their assistants speed dial the town’s top maître d’s. Gersh Agency senior managing partner Leslie Siebert has yet to put any power lunch meetings on her calendar. “My ventures out have been limited,” she explains, adding that she and husband, manager-producer Steven Siebert of Lighthouse Entertainment, have been spending most of their time in Malibu, where they do dine out at Lucky’s in the Malibu Country Mart. Known for its steak and seafood, the eatery took over a space formerly occupied by Mr Chow and has quickly become a hot spot in the area after only opening for outdoor dining in January, when COVID-19 restrictions first began to loosen. “They have a tent set up in the parking lot. Food is great — the best in Malibu — and it’s nice to get out.”

Dining out is something producer Stephanie Allain has yet to do. “I haven’t gone to a restaurant in over a year,” says Allain, who produced last year’s Oscar telecast. “I’m strictly making it at home — I’ve become quite the chef — and I order takeout now and then. I doubt I’ll be back to eating at a restaurant until at least the summer or until everyone is vaccinated.”

While Allain has been sharpening her skills, producer Todd Garner has been getting in his steps as an alternative to the power dining scene. “I have done a ton of hikes and walks. It’s a really nice way to be outside, be safe and talk,” explains Garner, who has a trail behind his home in Brentwood that he hits with industry peers unless they’re more comfortable pounding the pavement through the neighborhood. “We take long walks and you can relax in a way that you can’t when you’re sitting over a bowl of pasta, checking your phone and trying to get to the next thing. It’s also much easier to do that and stay 6 feet apart.” 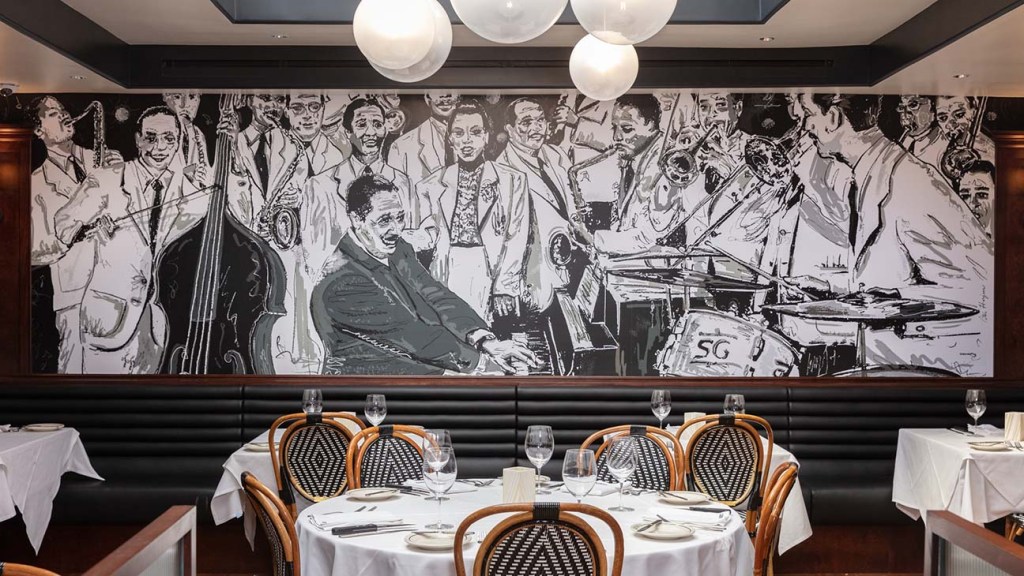 Garner, who became an expert on COVID-19 protocols while filming Vacation Friends in Atlanta amid the pandemic last year, says that it’s been a welcome respite to dining out and an activity that studio chief and top producer pals have gravitated toward. For him, it was inspired by the start-up community as execs there often preached activity as opposed to sitting at a table for their meetings. “It’s my new power lunch.”

The COVID-19 pandemic introduced many new social customs over the past year, starting with greetings like elbow and foot bumps as a way to say hello or bid adieu in a safe way. Terms like social distancing became part of the lexicon and now vaccination status has worked its way into the milieu, particularly as people sit down to share tables.

One Hollywood veteran, who is long based in New York, hosted a birthday dinner at a Greenwich Village staple with nearly a dozen guests and was amused by seeing how her close circle interacted for the first time in more than a year. “When people saw each other, right before they hugged, they would say, ‘I identify as vaccinated,’ or ‘I’m half-vaxxed’ or ‘I’m getting vaxxed tomorrow.’ You don’t say, ‘How are you?’ anymore — this is how you greet people now.”

Producer Matt Baer (Unbroken) — himself a regular denizen, in the Before Times, of Golden Triangle stalwarts like The Grill, The Palm and La Scala — is double-dosed and ready to break bread, but observes that the agents and managers he most frequently meets to do business have yet to return to their offices, and are still bound to their pandemic-era video-conferencing schedules: “All they do are Zoom calls all day long,” he sighs.

More existentially, Baer frets that the next wave of Hollywood dealmakers may, even once the plague ends, make the shortsighted decision to skip what he sees as the remunerative yet costly — in time and money — practice of getting to know people over a drink or meal. “This business has always been based on going out,” he says. “It’s how you build long-term relationships. It’s going to take some time for this [rising] generation to decide: Do we want and need to look people in the eye, in-person, or is an online relationship enough?”