Elliott’s luxury streetwear line is a favorite among athletes including LeBron James (a longtime fan of the brand and with whom Elliott teamed for last year’s Nike collaboration), Kevin Love and Ben Simmons as well as Justin Bieber (who just wore the brand’s tie-dye basketball shorts at Coachella) and his wife, Hailey, Kanye West (who attended Elliott’s first New York Fashion Week show in 2015) and Whoopi Goldberg.

“It’s hard to quantify all of the ways the city of Los Angeles has influenced the store, because there have been so many,” Elliott tells The Hollywood Reporter by email. “Having launched the brand in 2012 with my best friend [Aaron Lavee], here in L.A., we thought it was only fitting that we opened in our backyard. It’s really affected everything in the process of building the store, from sourcing materials, to hiring and training the staff, merchandising the collection, and finally, opening the doors.”

Taking cues from Tokyo as well as the brutalist architecture of UC San Diego’s Geisel Library and the Salk Institute for Biological Studies, the designer covered the 3,500-square-foot store’s exterior with Japanese matte white tiling and added industrial steel, acrylic and concrete fixtures to the already minimalist interiors. (The store was previously occupied by Helmut Lang.) “The interior lighting mimics natural daylight temperatures, an intentional design feature that aims to bring the California sunshine inside,” Elliott says. 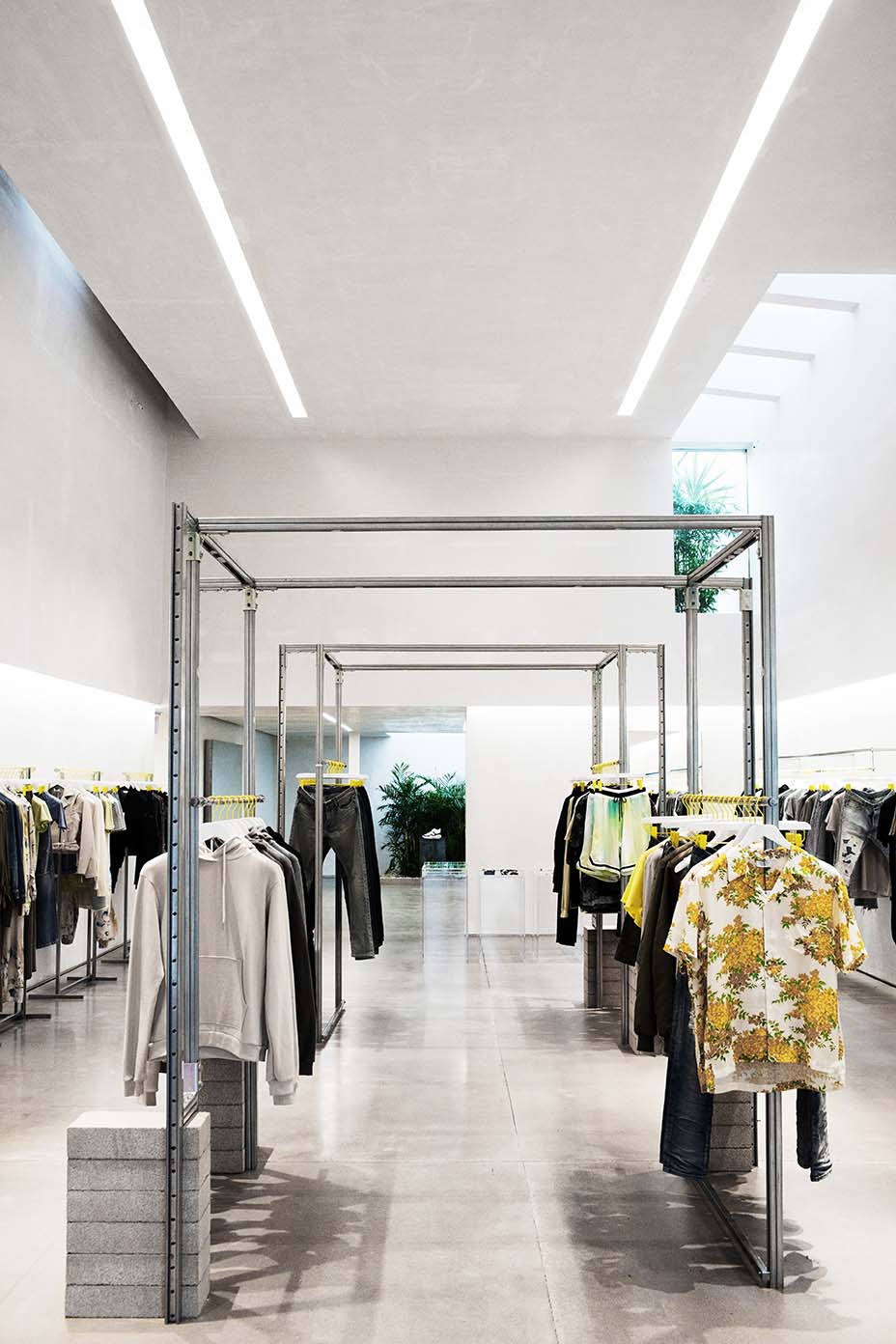 The front area of the store stocks the L.A.-based designer’s full women’s and men’s collections (which drop weekly in-store similar to the designer’s online schedule), like oversize French terry hoodies that were “designed to mimic textiles that were left over the beds of trucks, or in windows that are exposed to direct sunlight. You’ll also see a familiar floral print in our store, inspired by the flowers of the Bougainvillea plant, typically used on freeway dividers for urban beautification, and often found growing wild on the sides of L.A. streets,” says Elliott.

Pre Fall / Winter 2019 marks the first pre-fall offering and initial collection to reside at our flagship retail space in Los Angeles, opening this Spring at 8808 Melrose Ave. Styled by @henson and featuring models @callum.ks and @xumeen, this lookbook was photographed by @sylvecolless at our retail space prior to construction. The first drop, featuring French terry and jersey in Volt, is available tomorrow at 8AM PST, with weekly product drops to follow. The season is rooted in autobiographical references, drawing inspiration from the warm summer months John spent as an adolescent traveling for basketball tournaments throughout California. The goal with the collection is simple – to create a fun and appropriate offering to be worn now, while continuing to evolve fabric and silhouette, and pushing print and dye innovations. Follow the link in our Stories to listen to the inspiration behind the season, featuring John Elliott and our head of development, Nobu Yamamoto.

Also on offer are Elliott’s latest collaborations, including outerwear with Blackmeans and jewelry with M.A.R.S. The back shoe area features an indoor garden boasting L.A.-friendly bamboo specially sourced from Japan and a block of black plastic milk crates as seating — all the better to try on Elliott’s Nike x LeBron James Icon kicks as well as his Southwest-inspired sandal collab with Japanese brand Suicoke. The store will also offer limited-edition merch with the City of Los Angeles and will host exclusive launches before items are shoppable online.

“Our partnership with the city debuted on the spring/summer 2019 runway where we showed our ‘Los Angeles’ collection at a skate park on the West Side Highway in [New York],” Elliott says. “The opening look of the show featured a pair of sweatpants which had the city seal on them and we really tried to bring L.A. to NYC throughout the entire show experience. Now that we have our store in L.A., we are looking to give this collaborative product a proper home.”

The idea to open a retail space had been brewing since last year and “finding this location [in December] is really what solidified our intentions,” says Elliott. “I live less than a mile away, so I’ve frequented the area for years, not only due to my proximity, but also the institution that is Maxfield.”

Starting with Pre FW19, we thought it would be appropriate to give our perennial basketball short a proper name. Introducing the Game Short in our signature bougainvillea floral print, a reference from the SS19 season that really represents LA. Available tomorrow at 8AM PST in Ivory and Black color ways.

Name-checking new neighbors like BAPE and Palace as well as Acne Studios (which opened its second L.A. studio on Melrose last March), Elliott explains that “it really feels like this area is a cross-section of fashion and streetwear, and on the verge of being the next important street. There are definitely other important retail areas in L.A., but Maxfield has held down this street forever.”

@justinbieber wears the Tie Dye Basketball Shorts in Mojave with @wherearetheavocados after her set at Coachella.