We admit, it’s hard for men to really change things up on a red carpet, especially when events have a strict black tie (or, under special circumstances, all-black) dress code.

Peacocking via a colorful bow tie here or a flashy footwear choice there is usually the extent of menswear diversity. However, Laurence Fishburne has arisen as the unlikely champion for mixing things up on the step-and-repeat, ditching the suit and tie entirely.

The Black-ish actor arrived at the 2018 Golden Globes in what appeared to be a black silk kurta pyjamas, a traditional garment that originated on the Indian subcontinent consisting of a long top over loose trousers, his embroidered with mandalas. (Due to trade routes between Africa and India, similarly cut garments were seen in some east African nations and Muslim populations as well, though with different names.) Fishburne topped off the look with red shoes and a red dhoti, which is a length of cloth that is wrapped around the waist and tied at the front.

We were surprised, to say the least, that the actor chose this particular ensemble, considering at his last red carpet event he was photographed in a black tuxedo and poppy yellow bow tie. But we were even more surprised when Fishburne turned up at the NAACP Image Awards just one week later in the same kurta pyjamas and dhoti.

What exactly inspired the actor’s sartorial choice is unclear, as it appears he did not give any interviews relating to his ensemble. Last summer, however, for a more casual occasion, he was spotted in what resembled a red kurta and simple black trousers, so the pick is not entirely out of the blue.

Fishburne may be one of the first to grace the Globes red carpet in the traditional garment; however, several other stars have been photographed in the long shirt in the past, including singers Jidenna and Bilal. 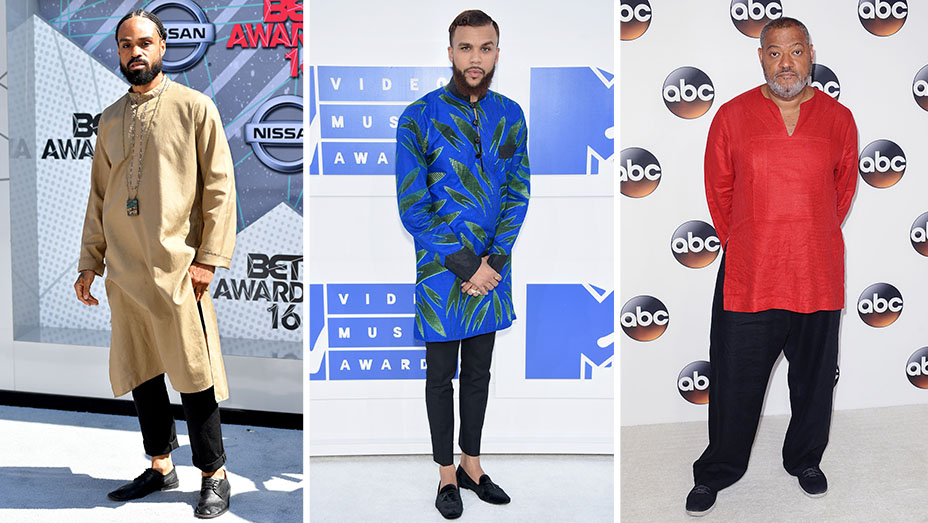