Continue to The Hollywood Reporter SKIP AD
You will be redirected back to your article in seconds
Skip to main content
February 14, 2020 12:50pm

Lena Dunham is officially a fashion model. The Girls star made her runway debut Friday by walking in the 16Arlington fashion show during London Fashion Week.

It was the first runway show for the British label. Co-founders Marco Capaldo and Kikka Cavenati met Dunham in 2019 when dressing her for the premiere of Once Upon a Time in Hollywood (she wore their feather-trimmed orange sequin gown on the red carpet, where she memorably tried to kiss Brad Pitt).

“I grew up watching Girls, so we were so excited about it,” Cavenati told Harper’s Bazaar. “Lena takes fashion seriously, but has so much fun at the same time, and that’s what we do. We take what we do seriously, but we also have fun with it. We just got on really well.”

“We’ve been lucky to work with such powerful women from the beginning — women who are changing the world for a better place and Lena is a prime example of that. She embodies this spirit of power and intelligence. Everything we stand for as a brand, she ticks every box for us,” Capaldo added. “She said it was a dream of hers as a child to walk in a catwalk show and that to walk for us would be a dream come true…. We said, ‘No Lena you’re making our dreams come true.'” 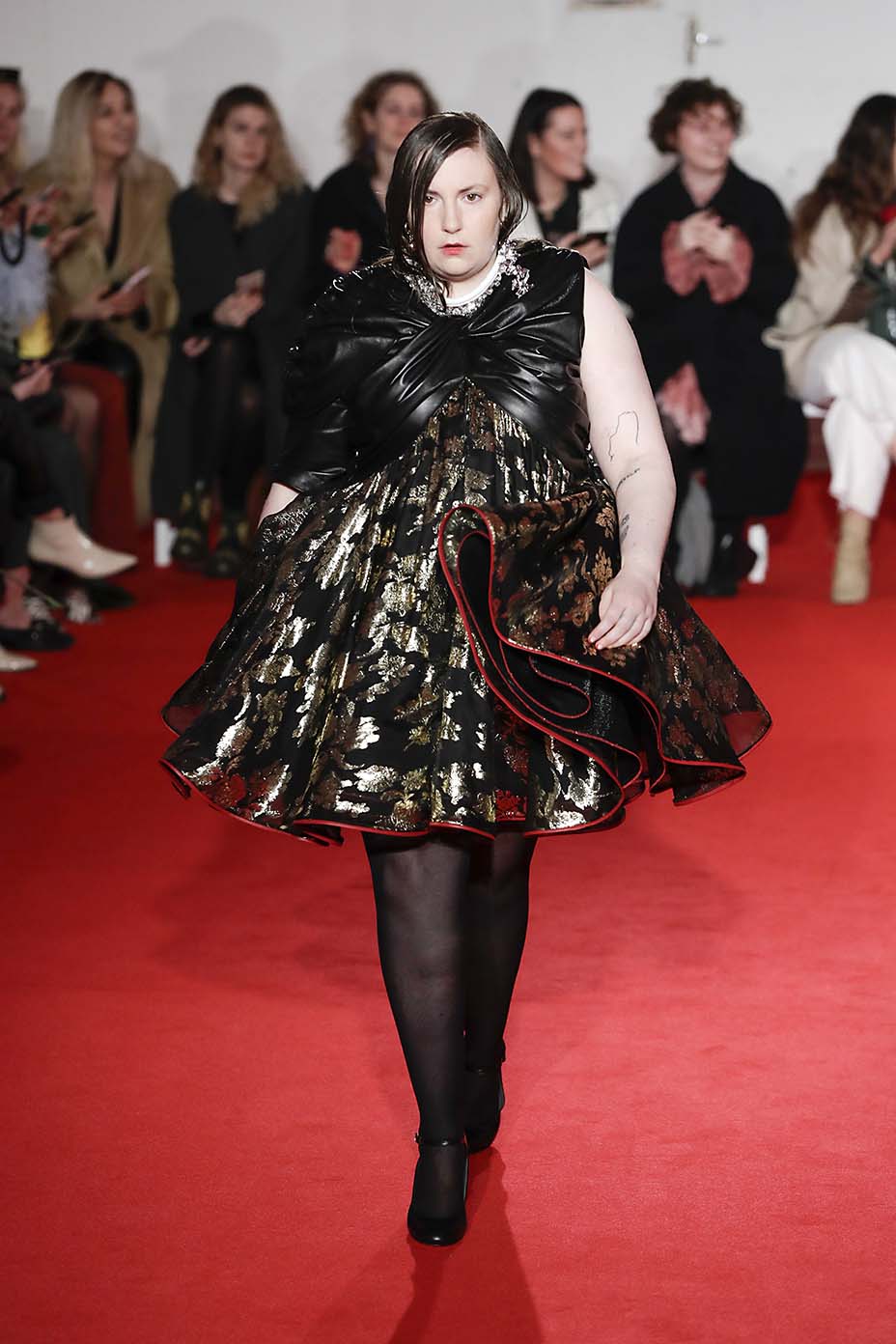 Dunham previously sat front row for Miu Miu’s womenswear spring/summer 2014 show during Paris Fashion Week, and posted on Instagram this week about experiencing London Fashion Week for the first time. “While I haven’t necessarily been hailed as a fashion icon (that’s the cute way to put it), I am obsessed with clothes. There’s never a day where I don’t get dressed with intention, even if it’s pajamas and bunny slippers in my bed,” she wrote.

The Camping creator also referenced the fashion industry’s resistance to size inclusivity by writing, “People have a lot of rules about how girls with flesh should dress (and, let’s be real, rules about how every type of woman should dress — it’s exhausting.) But I’ve had some incredible and warmly inclusive designers make looks for me, and it’s a real joy to stroll through the archives and remember some of my favorite moments in my life as a mannequin.” Mindy Kaling responded to the post by writing, “You’re a fashion IT GIRL.”

An activist for body acceptance, Dunham continually shocks with her fashion choices. At the 2019 Met Gala, she and Girls co-star Jemima Kirke twinned in pink and black ensembles reading “Rubbertist” and “Looner” to reference people with fetishes for rubber and balloons. Both were designed by Christopher Kane, who told The Hollywood Reporter, “Lena has such an intelligent sense of humor and has embraced camp and self-expression for all.”

For the 2017 Met Gala, Dunham rocked an Elizabeth Kennedy gown and Planned Parenthood pin reading #IStandWithPP, styled by Cristina Ehrlich, who dressed Laura Dern, Jane Fonda, Greta Gerwig and Julia Louis-Dreyfus for the Oscars last week. Dunham previously worked with stylist Chris Horan for the Once Upon a Time in Hollywood premiere.

Another star walking the runway this month: Miley Cyrus surprised at Marc Jacobs on Wednesday by modeling a two-piece black bra top and trousers combo with long leather gloves in New York. 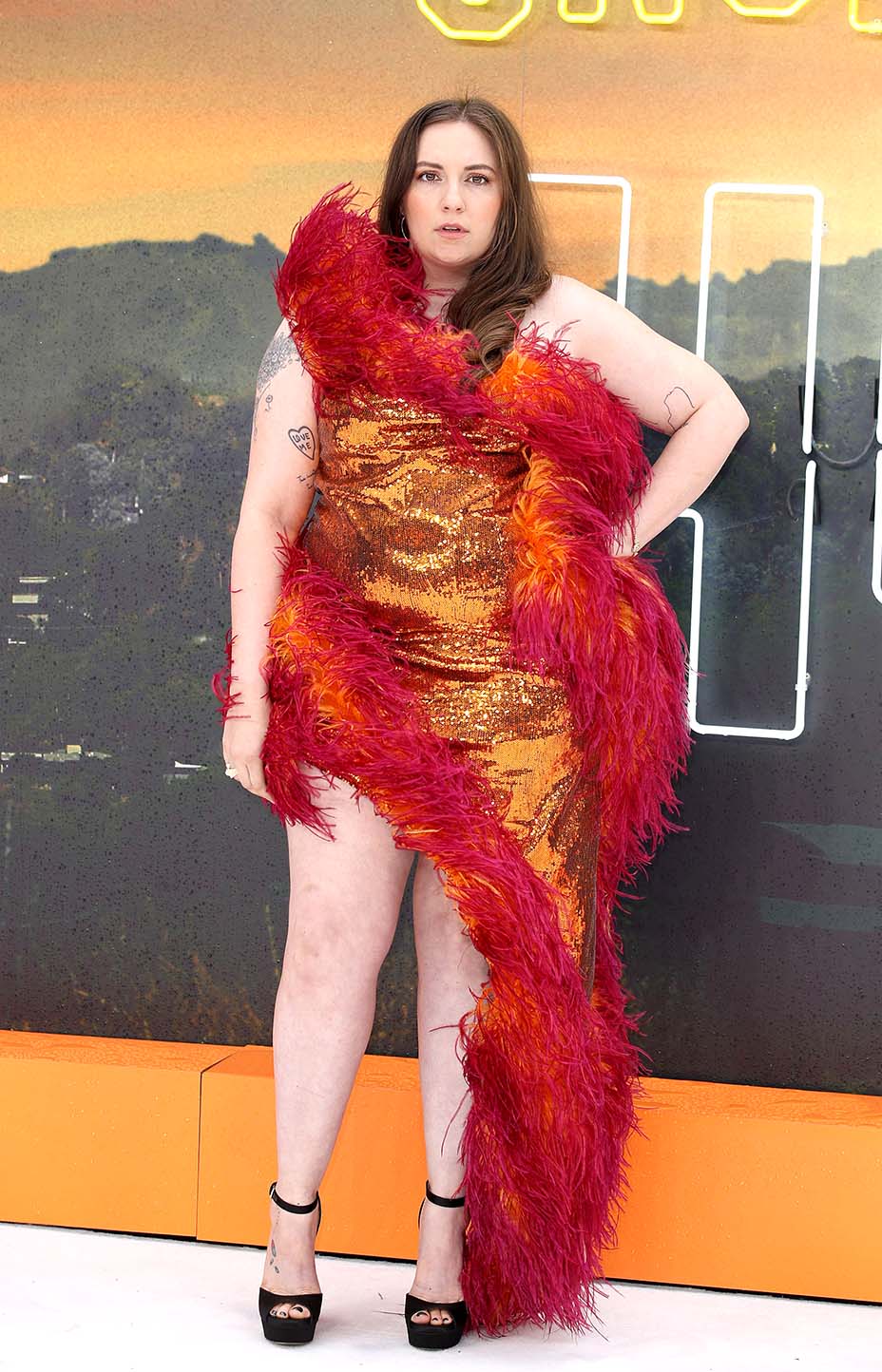