Letters Grace Kelly wrote in 1954 are among the highlights from The Estate of Oleg Cassini, an auction of the legendary fashion designer’s property, set for June 27 at Doyle on New York’s Upper East Side.

The 700-lot auction features a comprehensive selection of personal items, from automobiles and artwork to antique weaponry and the full-size suits of armor Cassini, who died in 2006, loved to collect. Among the lots there’s also a peek at Cassini’s Hollywood years.

Born in 1913 of Russian nobility who fled the Russian Revolution in 1918, Cassini emigrated to the U.S. in 1936 and by 1941 was designing costumes for Paramount Pictures, where he met actress Gene Tierney and worked on some of her best-known films, including 1946’s The Razor’s Edge and 1947’s The Ghost and Mrs. Muir. The couple married in 1941 and had two children before divorcing in 1946, though two notes in the auction from Tierney, dated 1980 and 1988, suggest the pair remained close friends: She signed the latter one, “Lots of Love, Gene.”

But it’s one lot, featuring a quartet of autographed letters from Kelly, that should draw maximum interest among collectors of Hollywood memorabilia. In 1954, Kelly traveled to Los Angeles to begin filming Alfred Hitchcock’s Rear Window, with one note discussing the “dull” and “endless” plane ride before indicating that her accommodations at the Hotel Bel-Air weren’t up to par. “…the Bel-Air looked particularly nice. Except the room isn’t satisfactory and we may have to wait a few days until something else can be arranged,” she wrote on the hotel’s stationery. 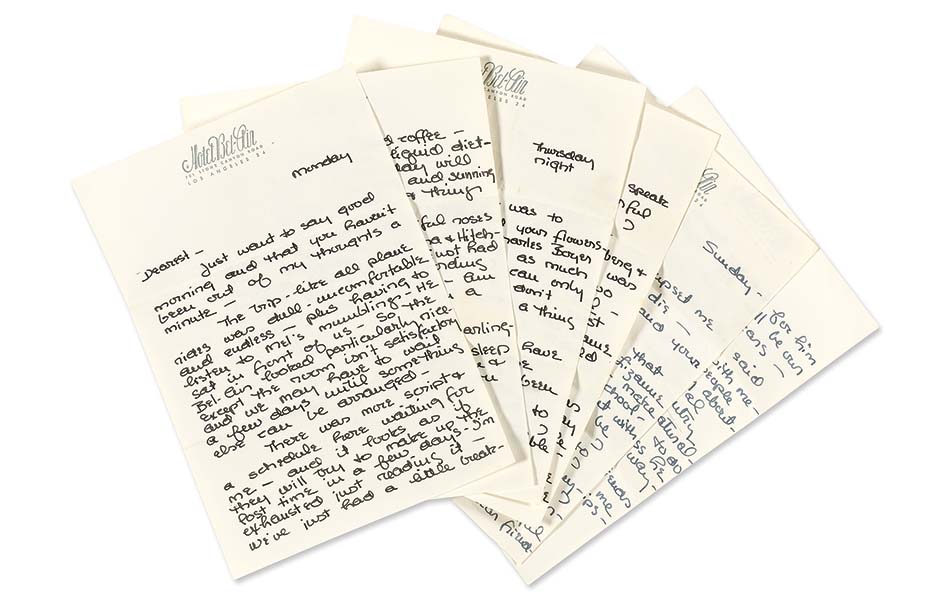 Another letter mentioned previews of 1954’s The Country Girl. “Apparently they were most successful and we all came off very well,” Kelly wrote, a thought that presages her 1955 Academy Award as best actress for the film, which co-starred Bing Crosby. And while Kelly and Cassini eventually would become engaged, the same letter hinted that perhaps it hadn’t yet happened: “I think I’d rather have a ring instead of an automobile,” she coyly wrote, before signing the letter, “I love you.”

The correspondence also indicated that Cassini had become jealous of the attention Crosby, a married man, had been paying to his girlfriend/possible fiancee. “I told you he said that he was in love with me — but there are many people that he feels that way about — and after the emotional strain of playing Country Girl, this was only natural. But Bing would never try to do anything about it — unless he thought I wanted it that way,” Kelly wrote, ending her message with, “I have very few friends here — please don’t ask me to give up their friendships.” Kelly ultimately would break her engagement to Cassini in 1955 after traveling to France for the Cannes Film Festival, where she met Prince Rainier at his palace in Monaco. Kelly and the prince married in 1956, with her new role as Monaco’s princess also effectively ending her Hollywood career.

“These letters represent Mr. Cassini’s most concrete link to Hollywood and are also from Grace Kelly’s most prominent period as a major film star,” notes Peter Costanzo, director of Doyle’s rare books, autographs and photographs department and the specialist in charge of the June 27 sale. “Original letters from Grace Kelly at the peak of her fame are uncommon in the market and, coming directly from an estate like this, represent a real opportunity for collectors and institutions.” Doyle has set an auction estimate of $5,000 to $8,000 for the four-letter collection. 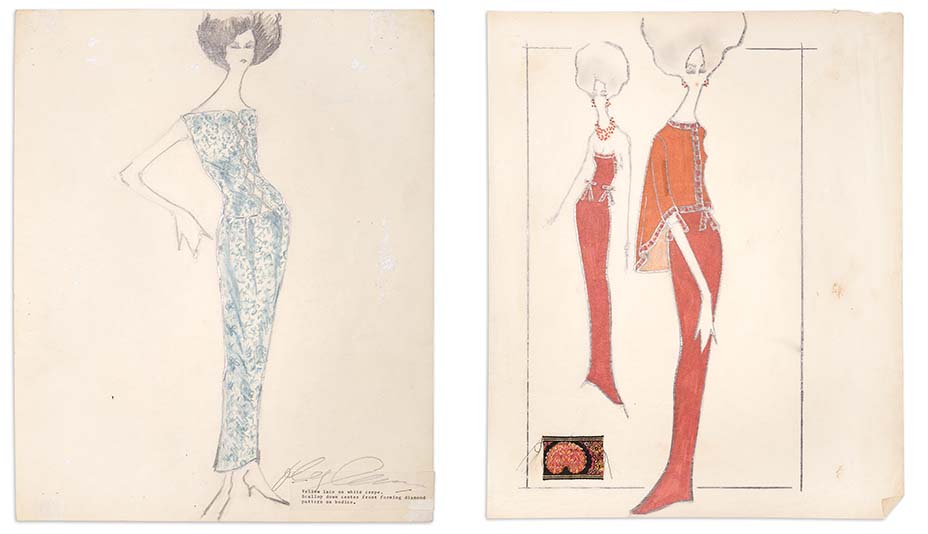 Cassini’s career is also well represented in the auction, notably his iconic work for Jacqueline Kennedy during her years in the White House. Sketches and notes seen in Cassini’s 1995 biography, A Thousand Days of Magic, are also among the sale’s highlights, including a pencil drawing of Kennedy’s inaugural gown. Prior to the seminal fashion moments created by the relationship, Kennedy wrote a nine-page letter Dec. 13, 1960, which chronicles in intricate detail the soon-to-be first lady’s concerns over her wardrobe — she instructs the designer to send fabric swatches of gowns to shoe and bag designers — and finishes with a list of personal thoughts, including pleas for discretion: “Protect me — as I seem so mercilessly exposed & don’t know how to cope with it,” she wrote.

While it’s one of several letters from Kennedy during that period featured in the auction, its subject matter and contents increase its historical impact, among the reasons Doyle has set an auction estimate of $10,000 to $15,000. “It was known that Mr. Cassini had maintained his correspondence and business archives, but the contents hadn’t been explored until very recently,” Costanzo explains (a battle over the estate between Cassini’s grandchildren and his third wife, Marianne Nestor, is among the reasons for the 13-year delay between his death and the sale). “Although he did discuss it and publish it, it seems this correspondence is getting a fresh view now. High-quality letters and artifacts from Mrs. Kennedy when she was in the White House are important. There is still a voracious appetite for golden-age material, and all these decades later, this material puts a real spotlight on the Camelot years and that time period.”

Prior to the June 27 sale, Doyle is showcasing the lots in a public exhibition June 22-24 at Cassini’s Oyster Bay Cove residence, located at 47 Sandy Hill Road on Long Island’s North Shore.

Costanzo notes that the selection not only reflects Cassini’s life and his taste for the finer things, but also depicts a man who honored his past while embracing his new home. As an immigrant, Costanzo points out, Cassini joined the U.S. Coast Guard in the days following Pearl Harbor and later served in the Army. After World War II, he became an American citizen — an act that also required Cassini to renounce his claim to nobility — before opening his Seventh Avenue fashion house in 1952.

“In Oleg Cassini, we see that reinvention and creation in America are possible; I really think he lived the American dream,” Costanzo says. “Without a doubt, in his life and in his possessions, we see a life well lived.”