While the memory of Lil’ Kim’s purple jumpsuit and coordinating pasty she wore to the 1999 MTV Video Music Awards still lives on today, many are unaware of who was responsible for putting together such an iconic look. But all that should change after Thursday night’s world premiere of the new documentary The Remix: Hip Hop X Fashion at the Tribeca Film Festival.

As it turns out, the person behind Lil’ Kim’s legendary ensemble — and so many others worn by a long list of artists — is a woman named Misa Hylton. Having helped shape the landscape of urban fashion throughout the ’90s, the 41-year-old stylist and designer serves as the centerpiece for The Remix, which explores the global rise of streetwear that remains prevalent in 2019.

Up until now, Hylton had never shared her story. But amid the societal surge of female empowerment in today’s #MeToo and Time’s Up era, the fashion guru and current MCM creative partner is excited to highlight the role women played in instituting trends that have stood the test of time.

“I wanted to be involved in The Remix because it’s a woman’s story. They wanted to show the powerful part that women have played in the intersection of style and music, specifically hip-hop,” Hylton told The Hollywood Reporter at New York’s Spring Studios. “Because you always hear the boys’ stories and all the men who’ve contributed. But for me to get an opportunity to share my story was really dope.”

Hylton is largely credited with liberating women in hip-hop from sartorial confines established in the 1980s when rap music first took off. As explained in the film, female emcees often wore baggy clothes in an effort to be taken seriously and fit in with their male counterparts. But when Hylton came on the scene, she steered her clients away from hyper-masculine pieces and instead encouraged girls in the game to celebrate their sexuality through fashion. According to Hylton, she is happy to see the skin-baring styles she championed back in the day reflected in the fashion choices of Cardi B, Nicki Minaj and more women in modern hip-hop.

“It feels really good to look back and realize how my work has influenced the way people are dressing right now. I had no idea that this was going to be in my future and that the ideas and the creativity that I shared with the world through my work with the artists that I worked with would be so long-lasting and so impactful,” said Hylton. “So, yeah, it feels good. It feels great, actually.”

The Tribeca Studios doc, co-directed by Lisa Cortes and Farah X, also features interviews with Hylton’s fellow female fashion pioneer April Walker, as well as their male allies Dapper Dan and Kerby Jean-Raymond. But, as executive producer Paula Weinstein told THR, Hylton was the “perfect guide” to lead viewers on this journey, helping them understand how African-American creativity — particularly the visionary work of black women — has been widely overlooked in the narrative surrounding hip-hop and fashion.

“I think that women across the board have been unrecognized. We wanted to make a film that recognized the contributions of Misa and of other extraordinary women who have toiled in these vineyards for a long time but haven’t been properly recognized,” said Weinstein. “I think her story will really resonate in today’s social climate.”

Hylton’s most notable muses, Lil’ Kim and Mary J. Blige, attended the Tribeca premiere to support their longtime collaborator. Other musicians, actors and Manhattan’s style set — including Roxanne Shante, Bevy Smith, Natasha Lyonne and Cardi B’s younger sister, Hennessy Carolina, among others — came out in droves to partake in The Remix‘s champagne-filled fete. (Personal bottles were left atop gilded tables placed in front of each guest’s plush, black velvet chair.)

After the screening, Lil’ Kim surprised attendees — and even seemed to shock Hylton — with an impromptu mini-concert. Dressed in an MCM jacket with matching pants and sky-high heels, she kicked it off with her 2003 hit “The Jump Off” and concluded with a very touching performance of her 1997 classic “Crush on You.” Lil’ Kim likely chose that song because Hylton styled the rapper in an array of monochromatic outfits and that infamous red fur bikini for its accompanying music video, which garnered praise from the fashion community and ultimately led to editorials in Vogue and Harper’s Bazaar. Before launching into the tune, Lil’ Kim opened up about her decades-long relationship with Hylton.

“I just feel like crying because we don’t get a chance to be with each other all the time,” she said, holding back tears. “I’m so happy for you, Misa. You deserve all this and more. She treated me like her baby sister, for real. She kissed me, she loved me, she spanked me. Y’all don’t understand. She really is my big sister and yes, I got yelled at. I love you, Misa, so much.”

Lil’ Kim ended “Crush on You” by serenading straight to Hylton, who was dancing close by at the edge of the stage. “It’s cool, not tryin’ to put a rush on you. I had to let you know that I got a crush on you,” she rapped a cappella. Judging from the smile on Hylton’s face, the feeling is mutual all these years later. 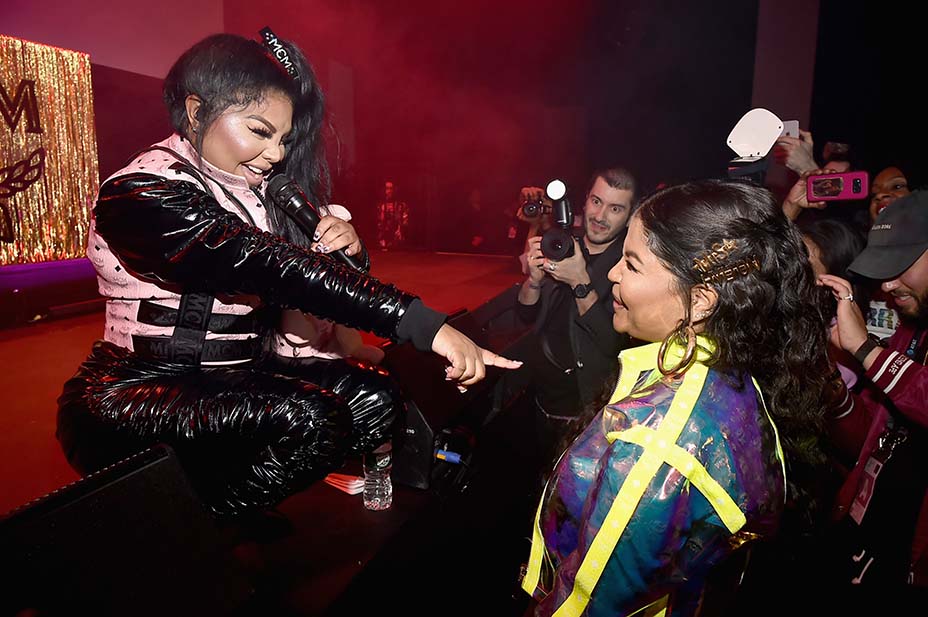