Yes, you have indeed clicked on yet another story about an actress’ body being Photoshopped to look like, well, not her body.

On Thursday — appropriately, International Women’s Day — Riverdale breakout star Lili Reinhart took to Instagram to share with her 6.2 million (!) followers that she does not condone the Photoshopping conducted by Cosmopolitan Philippines before they reposted images from her original February cover shoot for Cosmopolitan U.S. with co-star Camila Mendes. 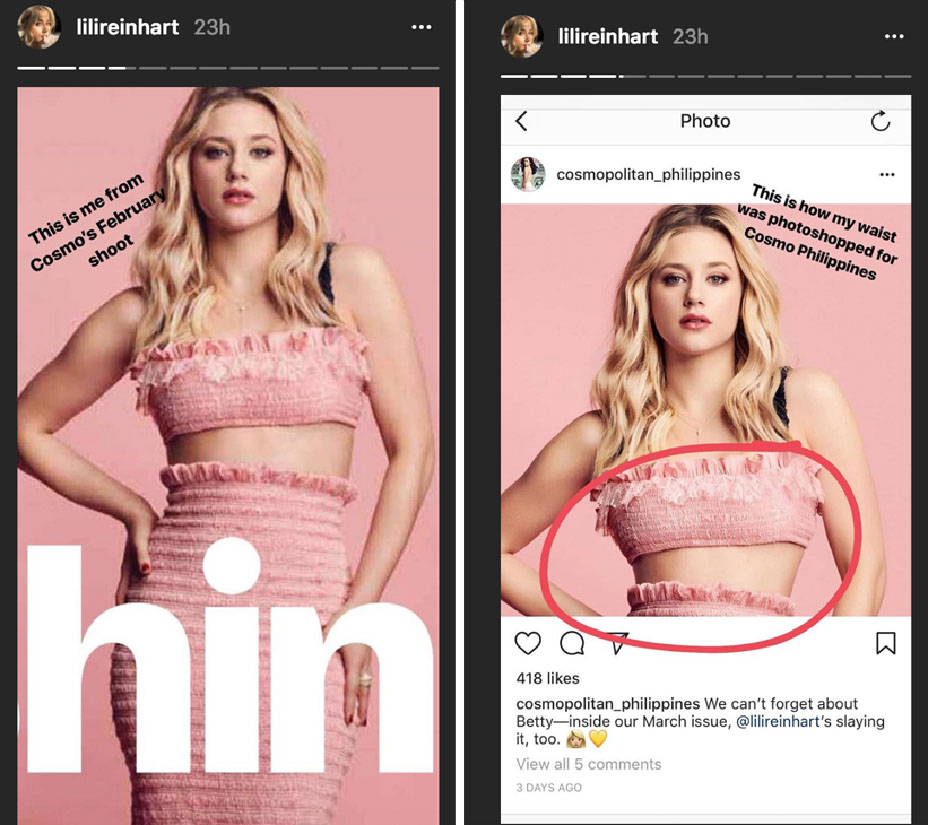 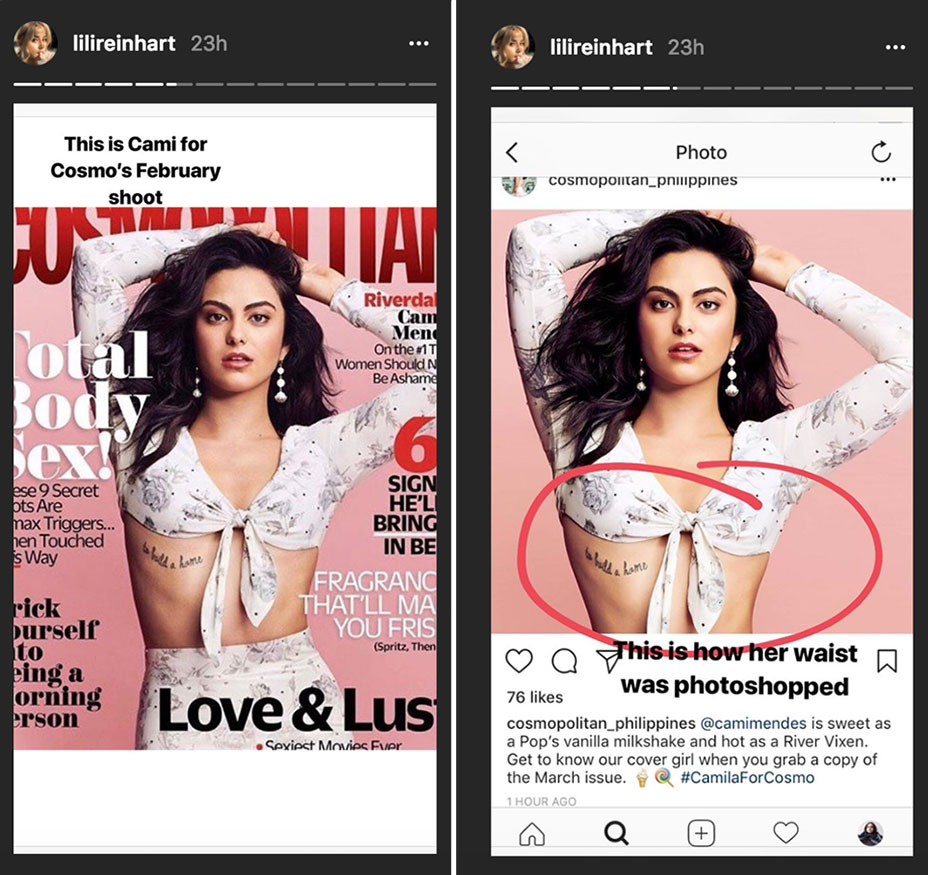 “To see our bodies become so distorted in an editing process is the perfect example of the obstacles we have yet to overcome,” wrote Reinhart after pointing out how each actress’ waist had been digitally whittled.

“We cannot stop fighting. Our battle has only just begun,” she continued. “We aren’t going to hide behind photoshop to conform to beauty standards. That’s why I am calling out @cosmopolitan_philippines. It’s sad that you felt our bodies needed to be slimmed down.”

She added, “Camila and I are fucking beautiful. As is. And you can’t ‘fix’ us.”

Reinhart, 21, has used her platform on multiple occasions to address the negative side effects of the entertainment industry’s pressures; last year, she detailed her own struggle with anxiety and depression on social media.

Mendes has also been open about her battle with eating disorders and feeling insecure playing the short skirt-wearing Veronica on The CW’s Riverdale. The 23-year-old recently shared support for The Chain, an eating disorder peer network for women in the fashion and entertainment fields, launched by fashion editors Ruthie Friedlander and Christina Grasso.

“Our minds can get so contaminated with endless images of perfection, and even if you don’t suffer from an eating disorder, it can’t hurt to incorporate a little body positivity into your routine,” she wrote on Instagram. “Take care of yourself in every way that you can.”

The actresses may play high schoolers with a fatal attraction to danger on TV, but IRL, the young women that portray Betty and Veronica are as woke as they come.

I met @thepouf at a gala for Project Heal, where we bonded over our experiences being in the fashion/entertainment industry while recovering from an eating disorder. Even though I’ve been crazy busy and on the other side of the continent, and even though I’m quite possibly the worst texter I know, Christina frequently checks in to see how I’ve been doing, and through that alone I’ve learned to appreciate the value of peer support when recovering from an eating disorder. Christina recently co-founded The Chain, a nonprofit organization that offers peer support for women in fashion & entertainment who struggle with eating disorders. I’ve been following @thechainnyc – and having that constant reminder to love my body (especially on instagram where my feed is full of perfect pictures and “perfect bodies,” and especially being in front of a camera every day playing Veronica, who adores her tight mini skirts) is just enough to clear my head of all the negative voices that creep in every once in a while. Our minds can get so contaminated with endless images of perfection, and even if you don’t suffer from an eating disorder, it can’t hurt to incorporate a little body positivity into your routine. Take care of yourself in every way that you can