Oscar-winning actress and fashion darling Lupita Nyong’o stepped out at the world premiere of the much-anticipated Marvel Studios superhero film Black Panther at the Dolby Theatre in Hollywood on Monday night wearing a custom Versace gown in a vivid shade of purple symbolizing nobility and power. The pleated goddess gown has a bodice densely embroidered in gold, almost like chic armor, and extras include a custom Versace clutch handbag, Giuseppe Zanotti shoes and vintage jewelry from Beladora.

“We found out there was a purple carpet after we had chosen the dress, but it was kind of a perfect reason to go with the gown; I think it’s a new addition to the Lupita rainbow!” says Nyong’o’s longtime fashion stylist Micaela Erlanger in an exclusive phone chat with The Hollywood Reporter. Erlanger (who also counts Meryl Streep, Common and Diane Kruger as clients) has created five red carpet looks for the film’s press tour, kicking off with Monday’s L.A. premiere, and has made bright colors the fashion calling card for Nyong’o throughout. “There’s definitely a nod to her warrior character Nakia here, without being costumey,” says Erlanger. “It’s a really glamorous take on our vision and it’s very fierce, certainly.” 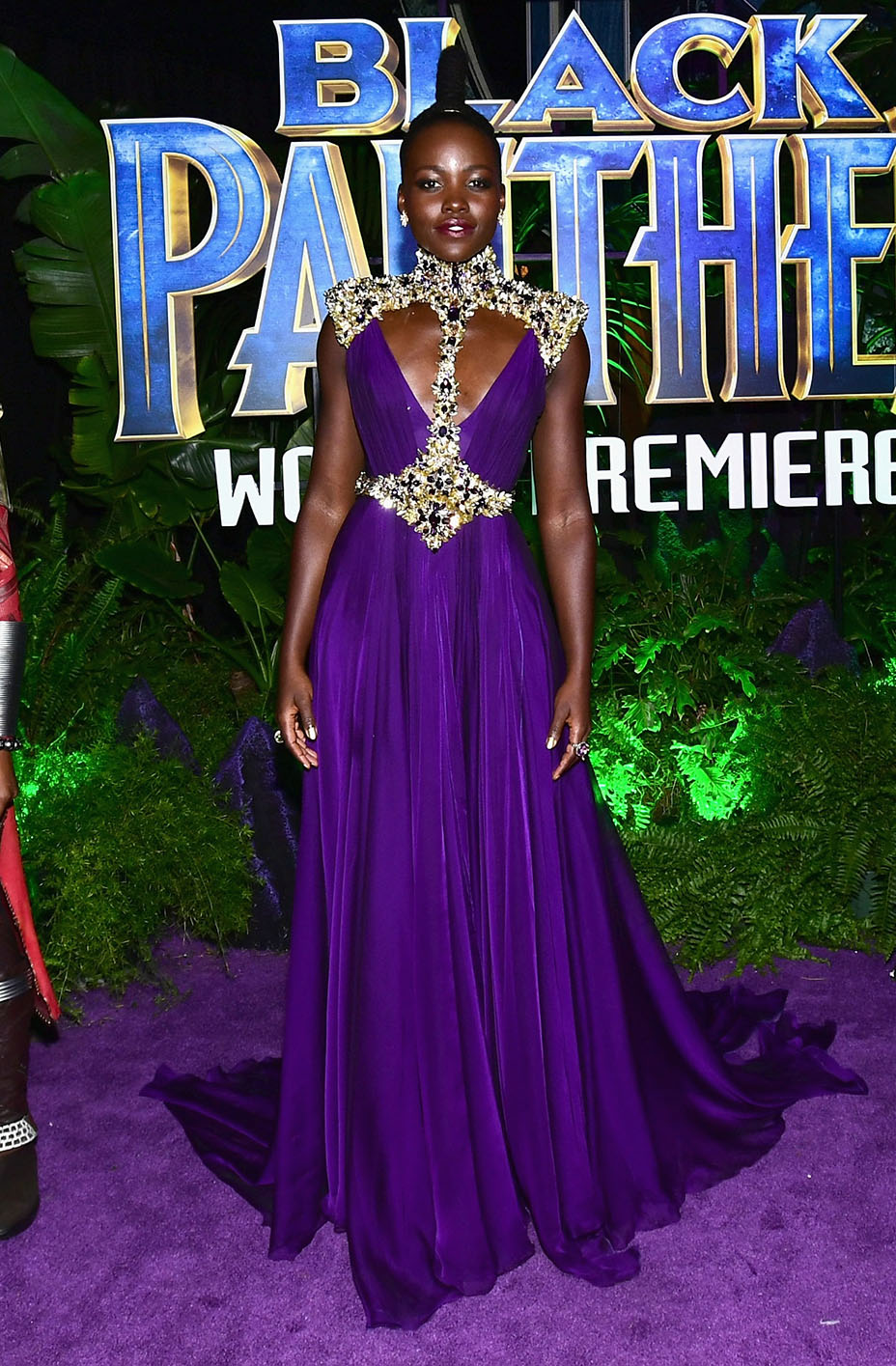 In the Ryan Coogler-directed film, set to open Feb. 16, Nyong’o plays the character Nakia, the Black Panther’s love interest and a member of the Dora Milaje, a team of women who serve as special forces to the fictional African nation of Wakanda. She also functions as an undercover agent and an ambassador in the multi-faceted role. 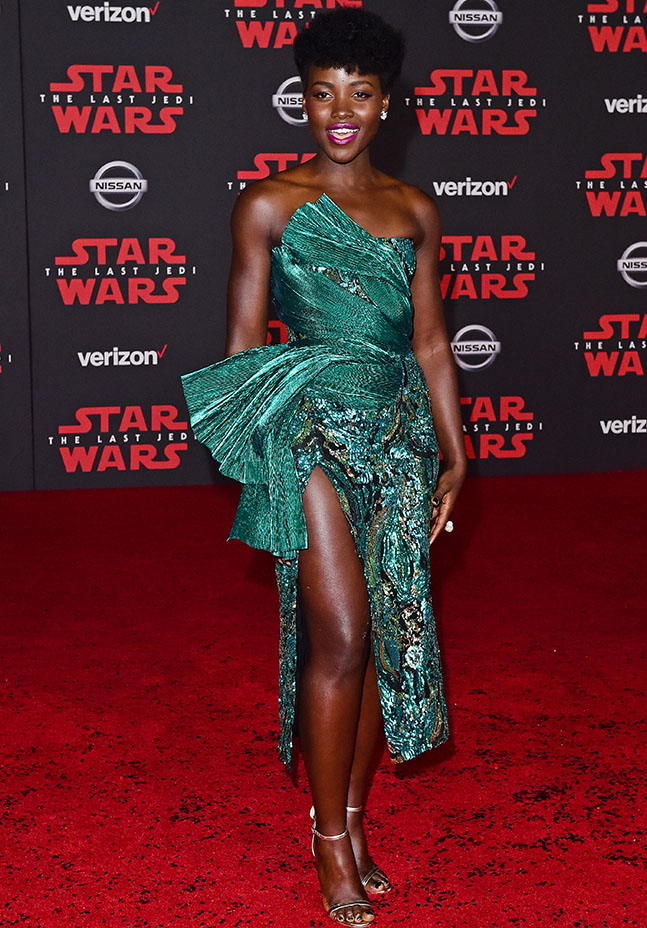 “We always have a little bit of a theme to our tours, looking back on the work we have done together, whether it’s Star Wars-related and she is bringing the galaxy with her or it’s Queen of Katwe and there is a nod to her African heritage,” explains Erlanger.

Erlanger is referencing the glittery dresses Nyong’o has worn for the Star Wars premieres — most recently a dazzling green Halpern dress for Star Wars: The Last Jedi — and a chic series of head wraps donned to accessorize her vivid, multi-colored Queen of Katwe premiere wardrobe in 2016. 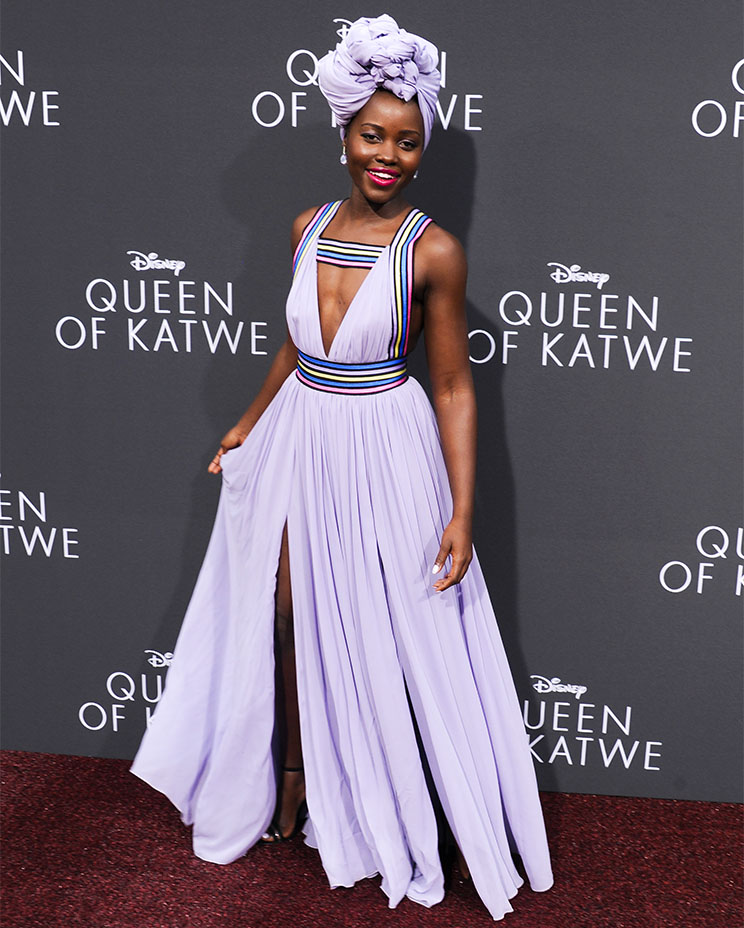 “Lupita is so collaborative,” says Erlanger. “She is involved from inception to sketches to the final product, and she is such a dream to work with. It’s really a team effort, and that’s why I think it’s so successful.”

The costumes in Black Panther were designed by Ruth E. Carter, known for her wardrobe work for the TV miniseries Roots and the films Selma, Amistad and Malcolm X. Carter told THR that she dressed Nyong’o exclusively in shades of green for the film, almost like a chameleon, with each hue worn only once. “It’s not only nailing one character, it’s nailing several in one person,” says Carter.

“Ruth, Ryan and I wanted Nakia to look both elevated and grounded in her work as a spy and each costume reflects those things,” says Nyong’o, who dons a body-hugging, techo-look chartreuse neoprene gown for a glamorous casino scene. “Neither aesthetic nor utility were compromised.”