After inhabiting rapper alter ego Machine Gun Kelly since the age of 14, actor Colson Baker, now 28, is rediscovering himself. Speaking unexpectedly slowly for someone with such a moniker, Baker describes seeing a screening of Big Time Adolescence, in which he acts alongside star and buddy Pete Davidson, and which will bow at Sundance on Jan. 28. “I can’t believe I’m a part of it,” he says. “It’s just crazy that it happened so naturally, from when Pete asked me to be in the movie, and the director ended up being a fan of Roadies,” Cameron Crowe’s 2016 Showtime series on which Baker co-starred.

Big Time Adolescence, about a teenager named Mo (Griffin Gluck) falling in with a group of 20-somethings, is premiering at the Sundance Film Festival; it also features Baker’s own early-buzz-gathering performance. “Besides him being my best friend,” says Davidson of Baker, whose recent roles include a turn in Netflix hit Bird Box, “dude is fucking talented and outworks everyone.”

Adolescence director Jason Orley says much of Baker’s character was improvised on the set: “He wasn’t playing Machine Gun Kelly and he wasn’t playing an asshole like in Bird Box. He’s this sweet guy who’s worried about this kid. And his scenes are just the funniest because of that.” 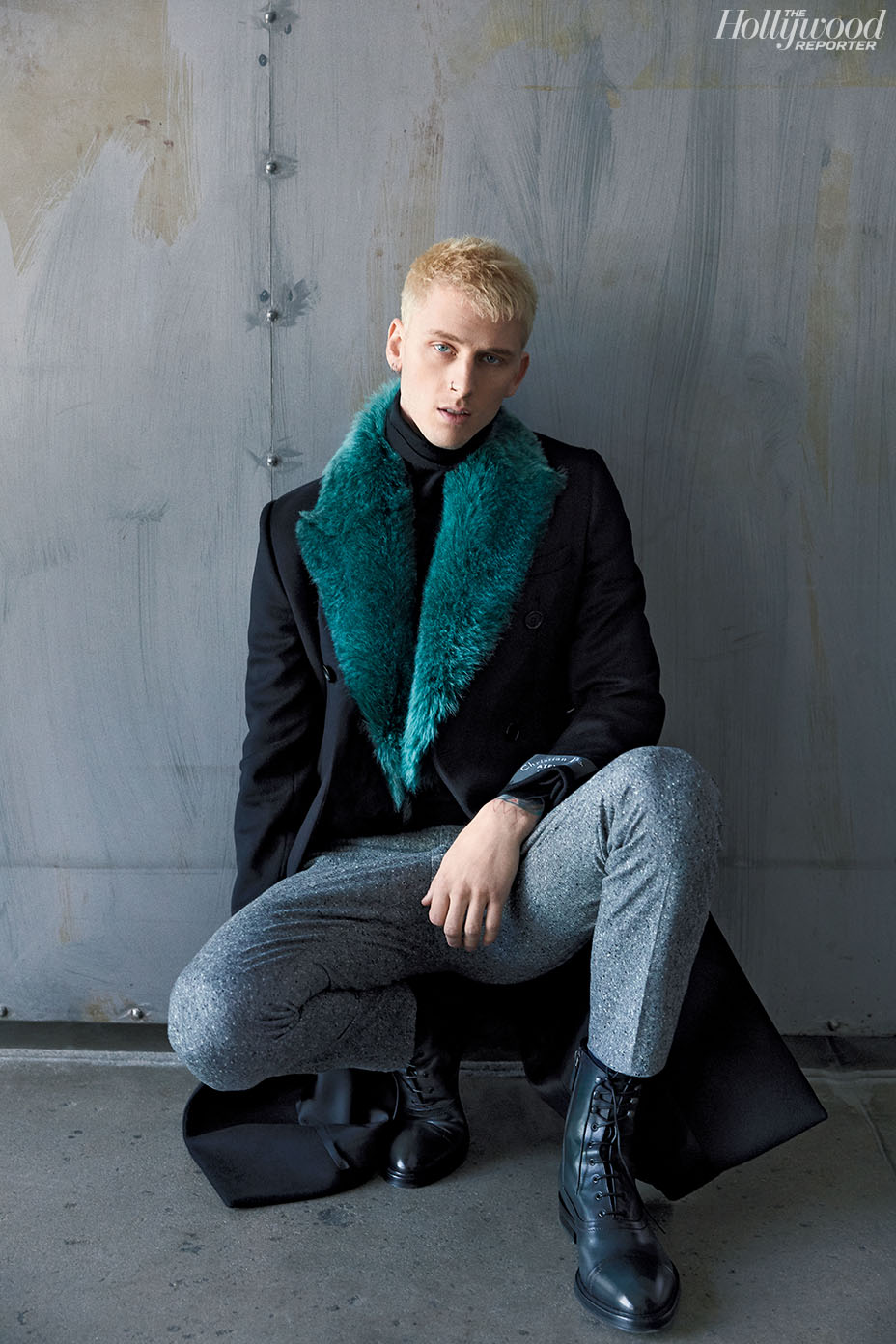 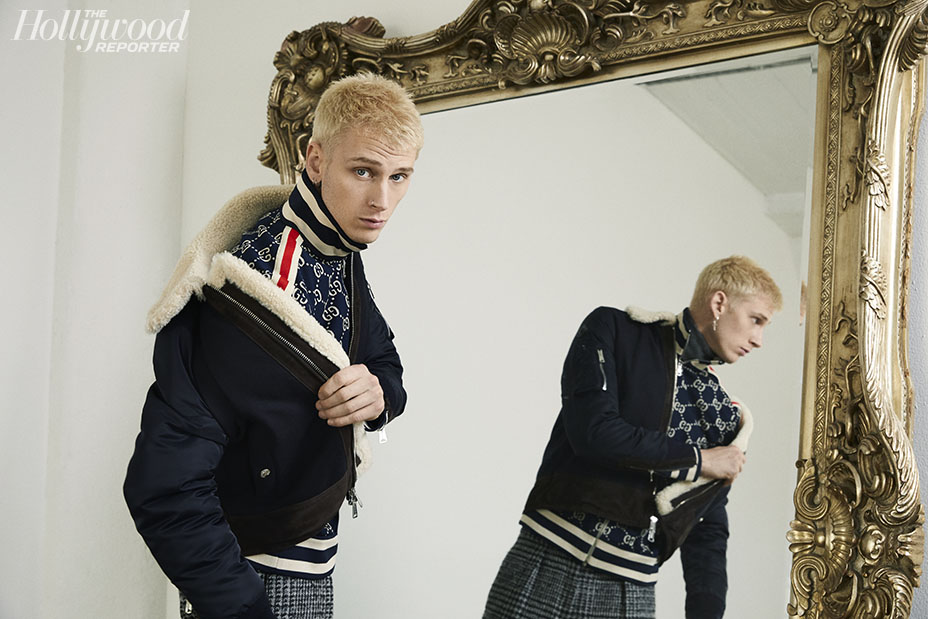 In preparation for his Sundance premiere, Baker signed up for some sartorial advice from THR contributing men’s style editor Andrew Weitz, who outfits many top Hollywood executives through his consultancy, The Weitz Effect. “In our first call, I asked, ‘Who is Machine Gun Kelly and who is Colson Baker?’ ” says Weitz. “I wanted to bring some of his swagger to Sundance” — a festival more known for ski-resort style than being fashion forward or flashy.

Baker, whose rapper aesthetic includes leather jackets and colorful, patterned shirts layered loosely over a full-torso tattoo, was down with Weitz’s vision. “I choose my clothes according to how I feel inside. Sometimes I have moments where I look like the kid ditching school to get high, in torn jeans, a rock band T-shirt,” he says. “Other times, I like to be rock-star chic and wear a statement piece. In the recording studio, the joke with me is that I’m always so dressed.” 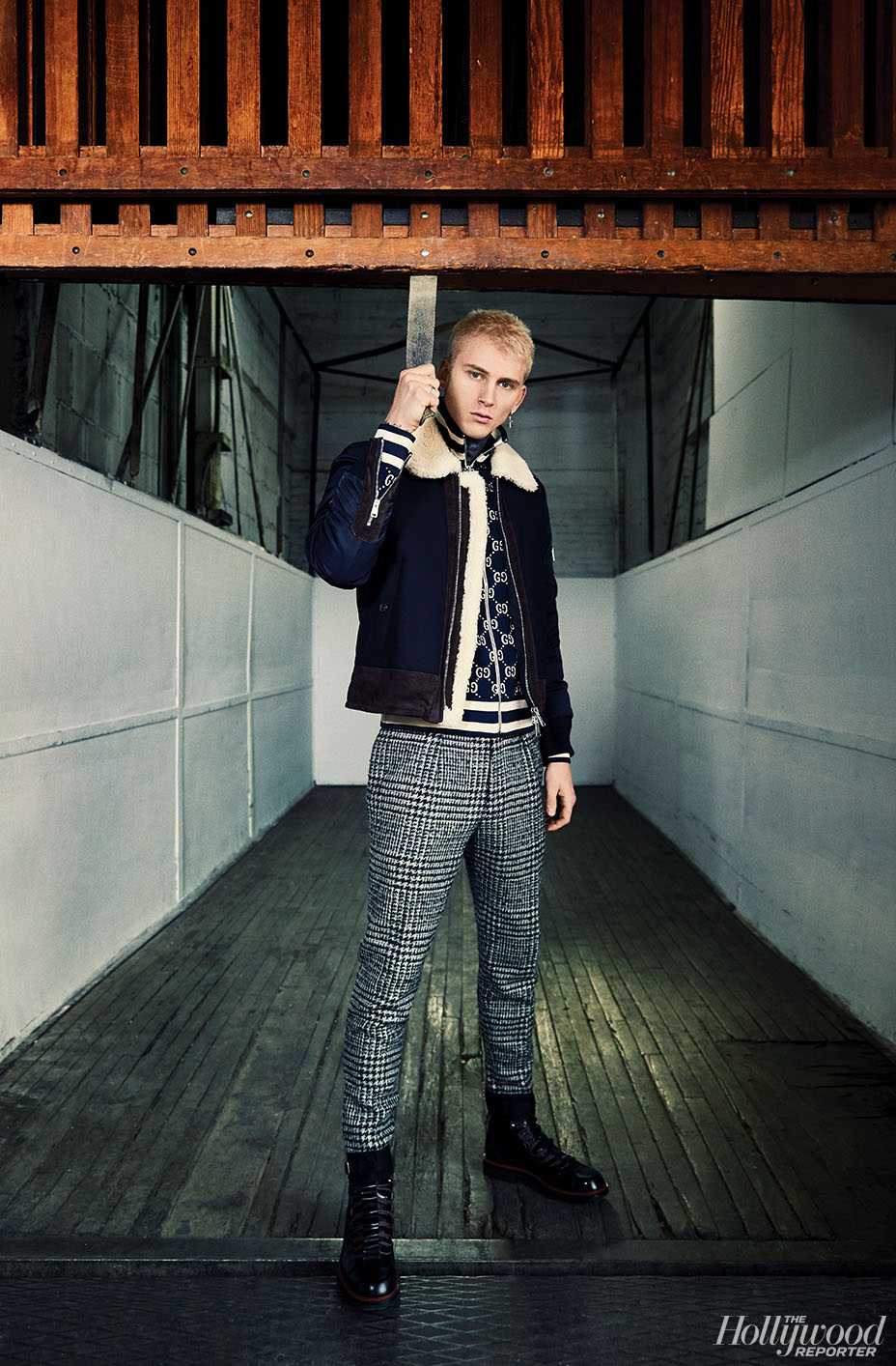 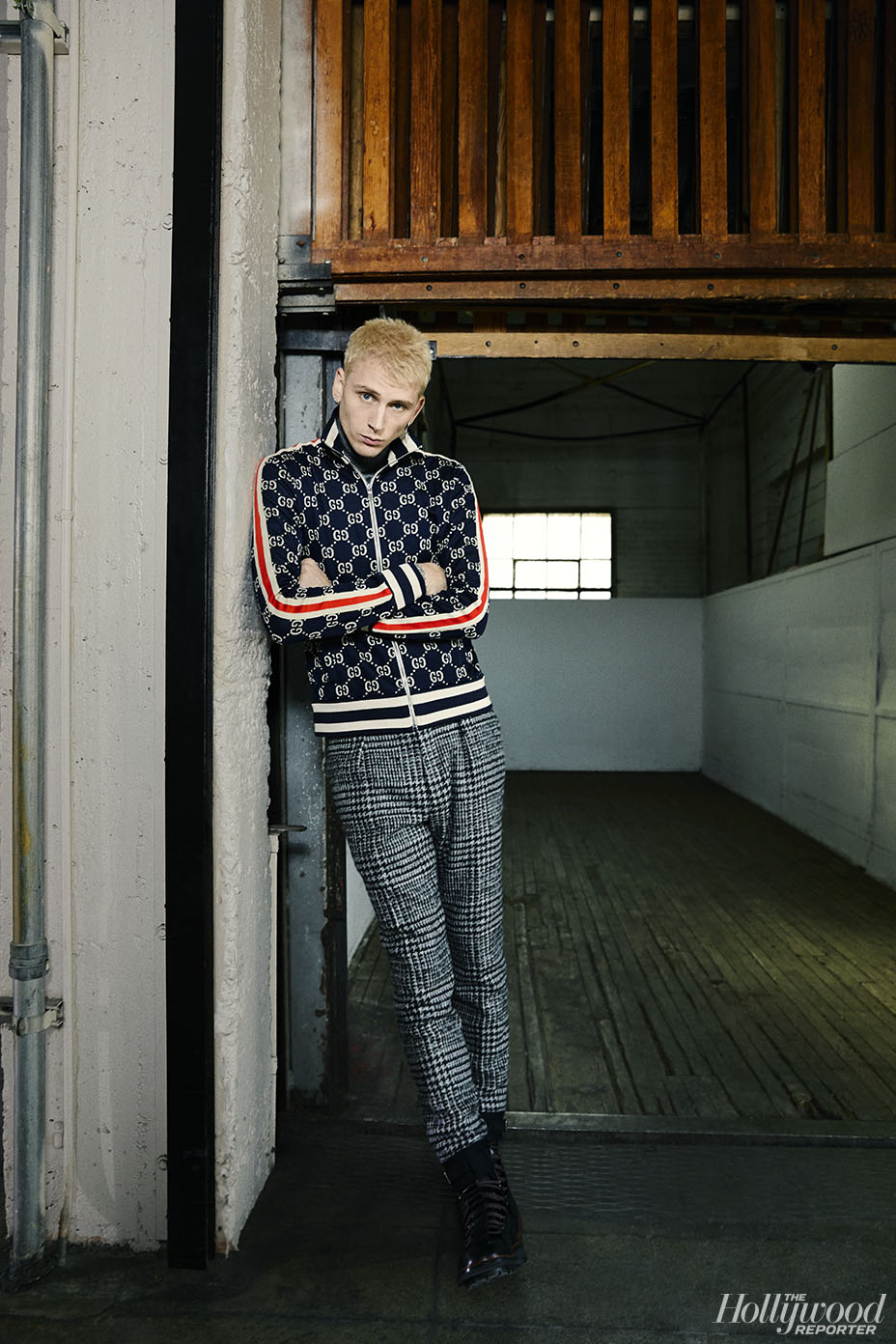 For a statement-making premiere look, Baker initially inquired “about a suit,” says Weitz, who explained to the festival newcomer that he’s “staying away from suits because it’s more relaxed at Sundance.” The actor and style consultant settled on a Dior Homme greatcoat with a shearling collar. (Once Baker tried it on at the shoot, “everybody’s mouth dropped,” says Weitz.) Underneath, they kept it simple with a sleek turtleneck and slim Donegal tweed trousers from Isaia. Dark lace-up boots with a green top-glaze from Berluti suit Baker, who doesn’t wear sneakers. “I love the way the long Dior coat fit,” Baker says. “With the turtleneck, it feels very ‘antihero.’ “

For the second look, intended for a day of press and then blowing off steam afterward, Weitz suggested a Moncler down bomber jacket with a shearling collar and contrasting military satin sleeves. “It’s not a typical Moncler,” Weitz says. “People will ask, ‘Who makes that jacket?’ “

Weitz turned up the volume by pairing the jacket with a blizzard of pattern: Z Zegna narrow slacks in an oversize glen plaid and a clashing GG print in a zip-up cardigan, again over a turtleneck base layer. Baker cherishes the effect of walking “around Sundance, hitting a couple of bars and having people be confused on how the fuck a checkered pattern goes with a stripe and a Gucci double-G sweater jacket.” 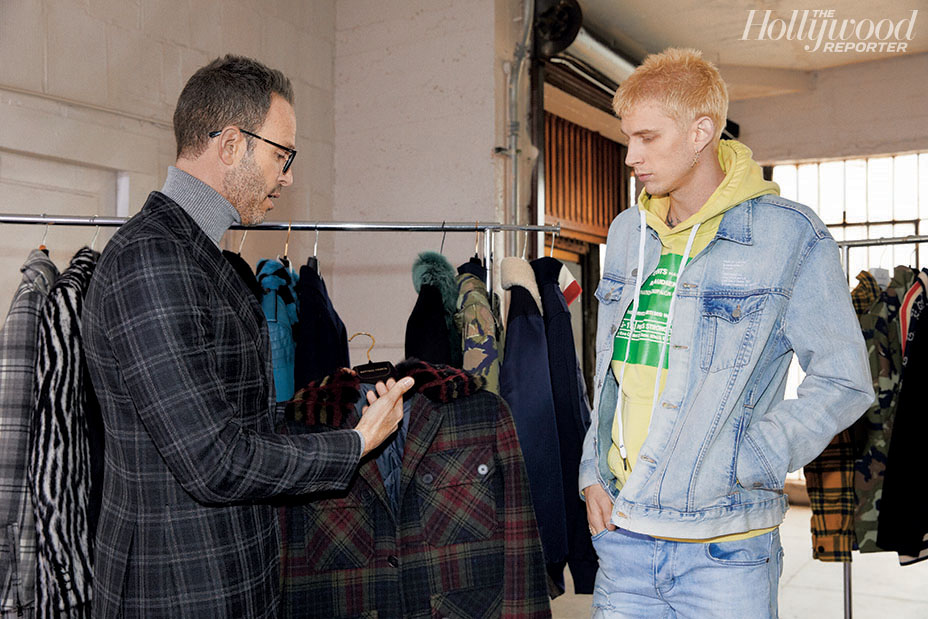 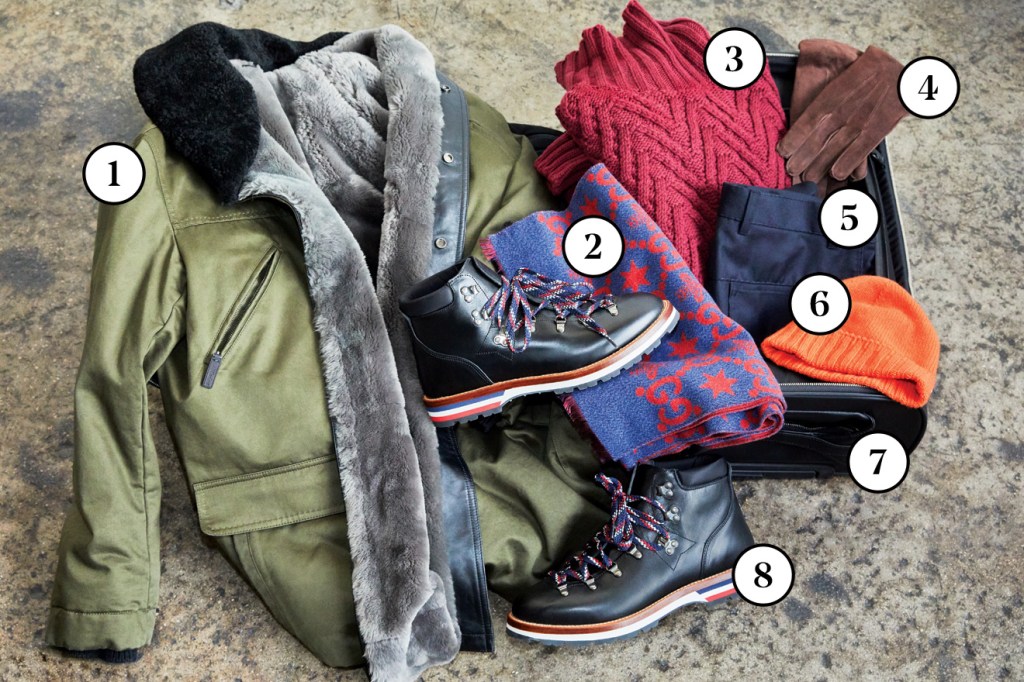 Baker — who at age 11 constantly filmed his friends “skateboarding … and smoking weed” and now has an “ultimate dream” to be a generation-defining director or talent — describes his acting career as almost a rebirth, ever since Roadies director Crowe encouraged him to use his birth name. “That was the first time I really started hearing my name, on that set, and it just gave me a different type of happiness,” he says. “I didn’t know I could be, like, not in this hard shell all the time. You show up [on set] at seven in the morning and some random guy says, ‘Hey, Colson.’ I forgot that I’m just, like, a kid. It was kind of a relief. Sometimes fans can idolize you so much, and that’s a lot of pressure to put on a 21-year-old.”

With that background, Baker took his early actor lumps with an almost grateful attitude: “I would go around Hollywood to do auditions and get no’s 25 times before I’d get one yes. And I’d go do that movie and then come back and do 30 more auditions and get 30 no’s and then get one yes,” he says. “That’s the tough part of the business, but to me, that’s the best part, because as an artist, pain is my biggest inspiration. It hasn’t deterred me yet.” 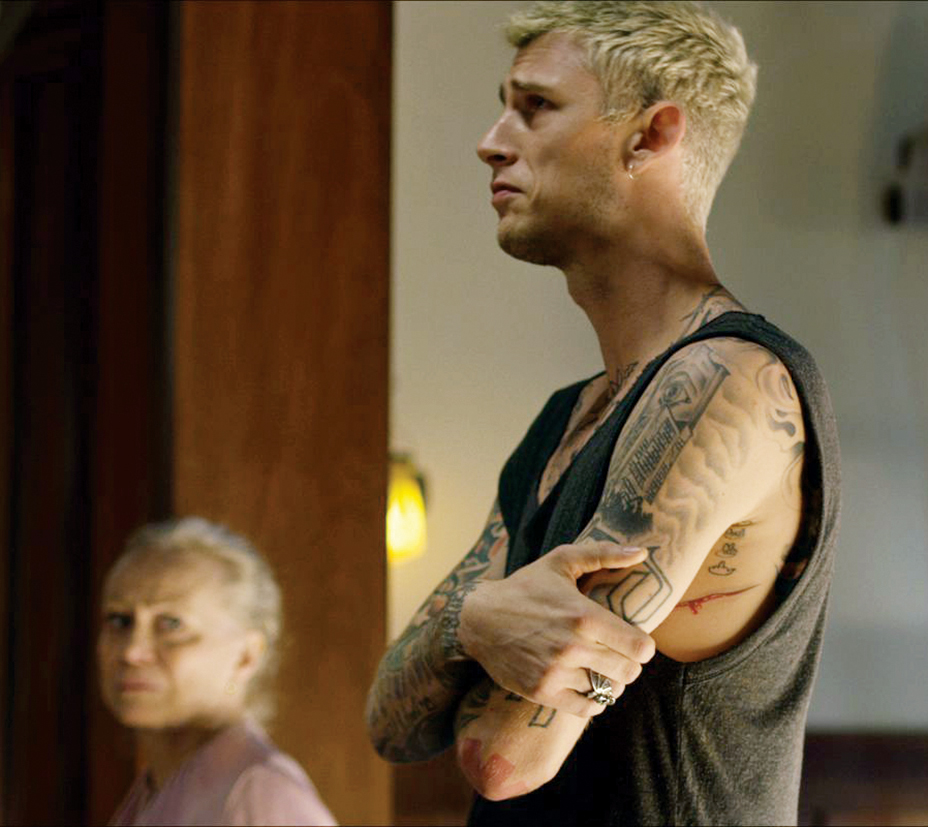 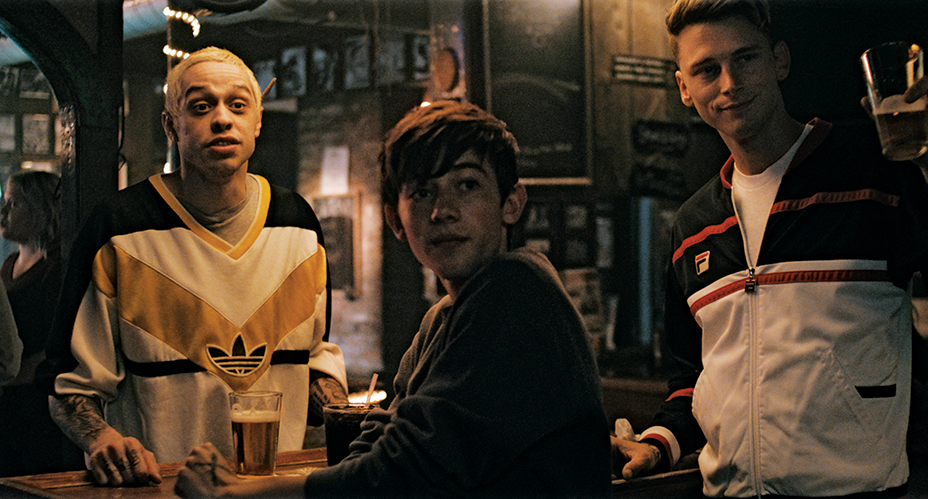