After forty-plus years in business, it was time 74-year-old Manolo Blahnik share his story in film, thought fashion editor and Blahnik’s longtime friend Michael Roberts, who made his feature-length directorial debut with Manolo: The Boy Who Made Shoes for Lizards. When the documentary’s trailer was released this July, it created much media buzz, thanks to heartfelt memories recalled by the industry’s top stars — Anna Wintour, Andre Leon Talley, Rihanna, Naomi Campbell, to name a few — and its glimpse into the charmingly camera-shy designer’s personal life. On Sept. 14, a glamorous crowd, including Mario Testino, Bianca Jagger, Carolina Herrera, Iris Apfel and Amy Fine Collins flocked to The Frick Collection for the film’s premiere.

“The very first time I saw the unfinished edit I actually cried because it was such an emotional journey,” Manolo Blahnik CEO Kristina Blahnik told THR. “It’s such an honest representation of him, and it’s a real honor that one of his best friends had the independence to be able to portray [Manolo] the way he sees him, which is also how the world sees him. Shoes are manifestations of his intellect and culture.”

Kristina Blahnik remembered her first Manolos: red patent pumps which she paired with bottle-green tights in the ‘80s. She’d dance around to Michael Jackson’s “Thriller” at the Manolo Blahnik office. As Manolo’s niece, she said, “Everything that Manolo does comes from the heart, so to be continuing the family legacy is incredibly important to me.”

Indeed, since using candy wrappers to create mini shoes for lizards found in the Canary Islands gardens where he grew up, Manolo Blahnik never lost his childlike wonder for the accessory — in the film, he says that being at the factory with his shoes is the only thing he loves. Apfel described Blahnik’s imagination as artistic and fanciful. “I admire Manolo’s creativity. He’s done some shoes that are absolutely marvelous and whimsical,” said Apfel, whose own documentary is currently up for an Emmy. Of the many tools director Michael Roberts employed in the documentary, including reenactment and illustration, Apfel particularly enjoyed Roberts’ use of animation. 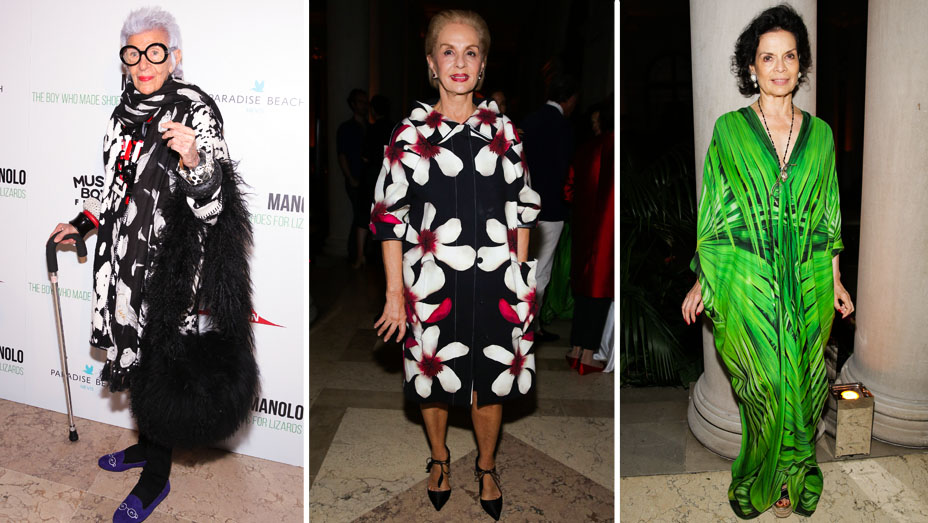 Fresh off her NYFW runway show, Carolina Herrera also lauded Blahnik’s creativity. “His look is very consistent, but with a lot of innovation. He doesn’t follow trends.” Echoing Naomi Campbell’s trailer quip, Herrera added, “Manolo is the king of shoes.”

According to the footwear royalty himself, timelessness is one of his “little tricks.” “You cannot say, ‘This shoe is from the ‘70s, or ‘This shoe is from the ‘90s,’” said the man of the hour. “My concept of shoes is always the same, but of course I change seasonally, and I would like to change even more.” Before the film, a nervous but excited Blahnik told THR that he’d seen the first full cut of the movie that evening. “I don’t want to see my face. I hate it! I’ll run away!” Safe to say, Blahnik remained in his seat, surrounded by his myriad friends and collaborators who adore him from head to (jeweled and pointy) toe.