Escapism was on the brain of two major New York designers for spring 2018: Michael Kors, who showed his vision of barefoot glamour from “Beverly Hills to Bora Bora” on Wednesday morning, and Marc Jacobs, who closed out New York Fashion Week with an ode to the transformative power of fashion itself on Wednesday night.

Jacobs’ show was held once again this season at the Park Avenue Armory, devoid of any of the traditional over-the-top scenery, featuring only a spare setup of folding chairs. They weren’t arranged in a straight line like in February, but in a nearly closed contained square, bringing the industry together at a time when it’s been knocked down and reminding us of fashion’s power to make people dream.

“Somewhere” was the title of the collection, which the show notes explained was a reference to “taking a holiday in our heads,” and anyone who has spent an afternoon in the closet of an eccentric aunt, grandmother, or even in his or her own closet knows that playing dress up can take you not only somewhere, but almost anywhere. That was the message here: that fashion can be transporting even in its most mundane, a second chapter to Jacobs’ exploration of fearless everyday style, which started with last season’s ode to the early days of hip-hop. 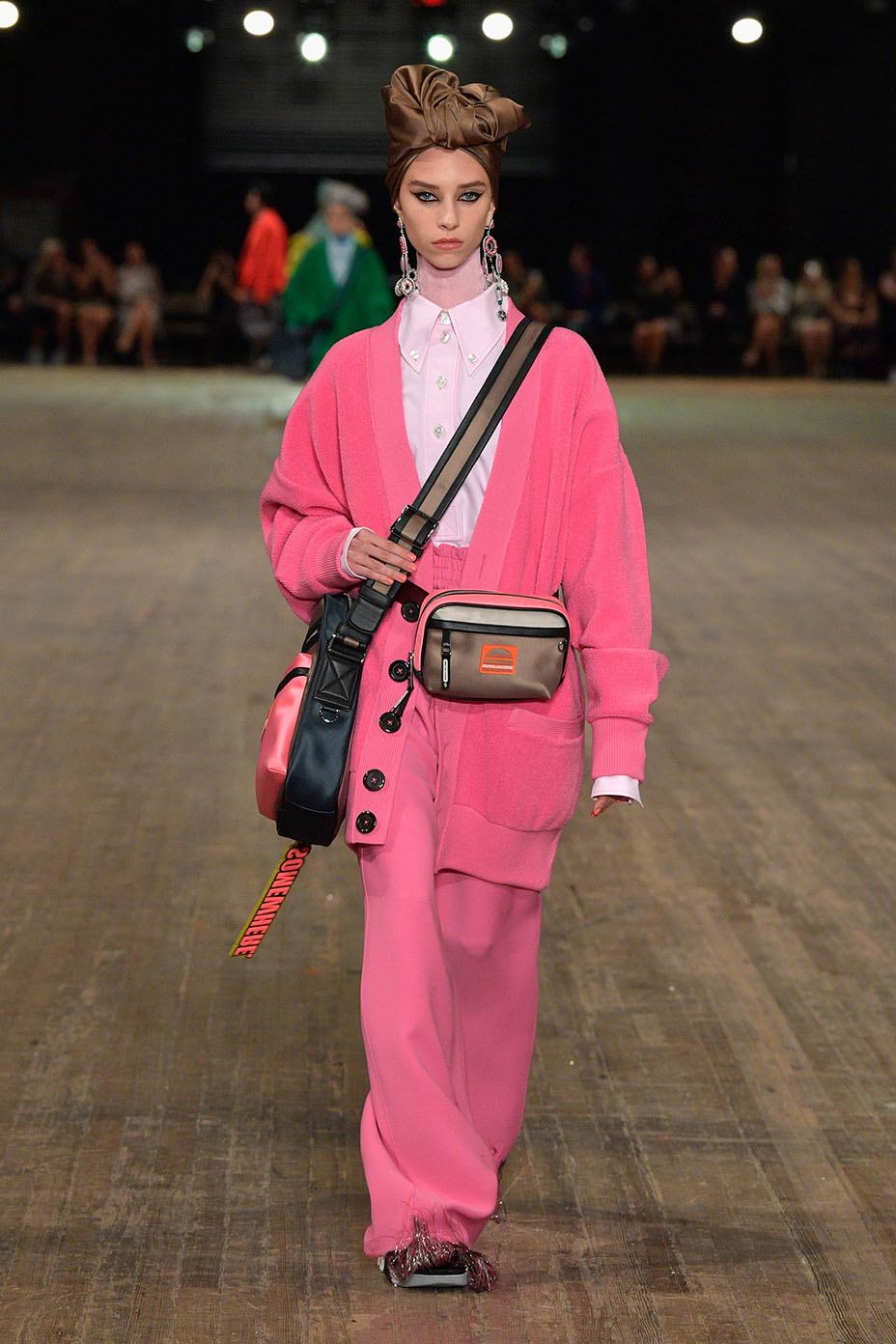 Speaking of heads, there were a lot of turbans, on nearly every look in fact, inspired by the silvery turban Kate Moss wore to the 2009 “The Model as Muse” themed Met Gala, Jacobs wrote in the show notes. 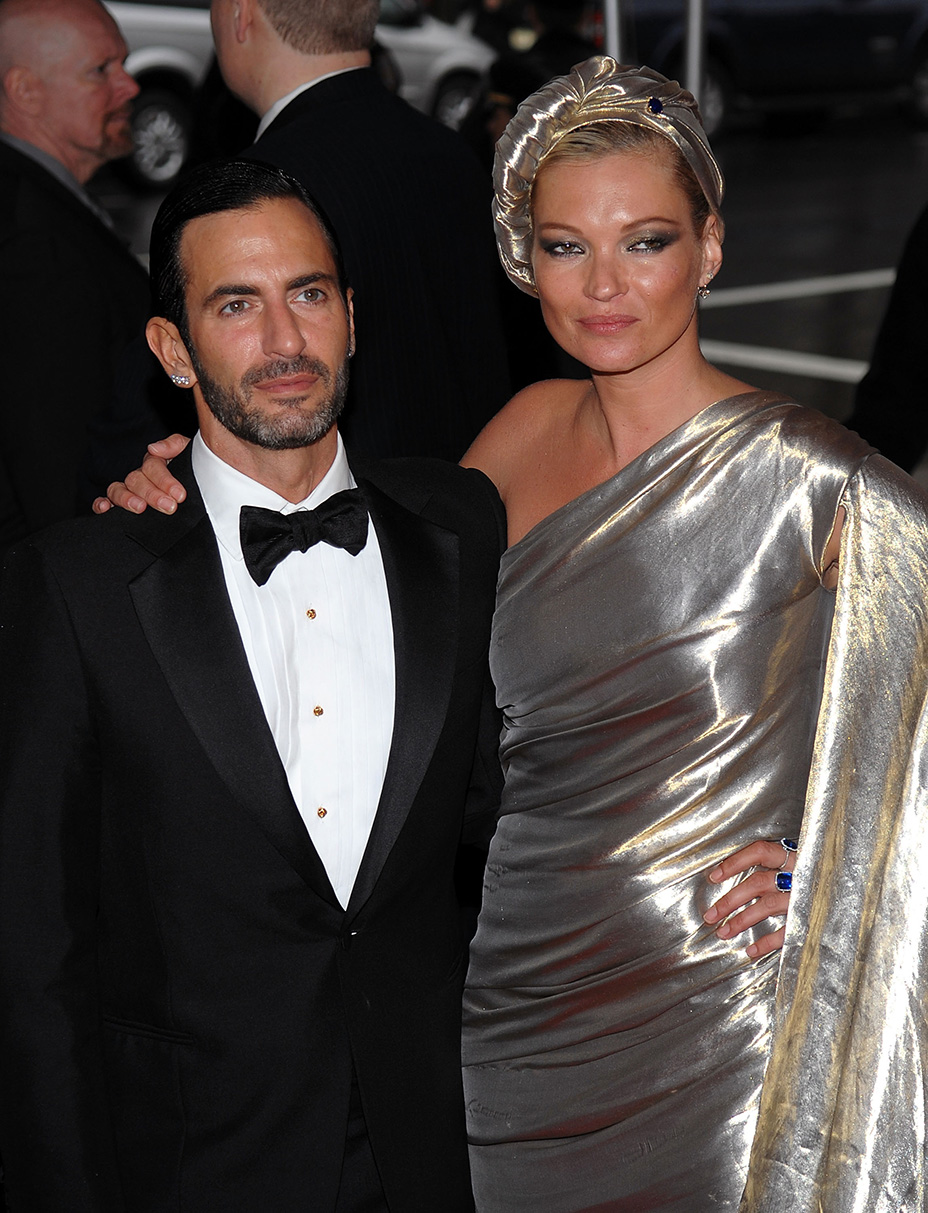 Made from draped and twisted scarves by milliner Stephen Jones, the turbans key into a trend that’s been bubbling up for a while now with fashion’s new renaissance of individual style — on the Gucci runways, with Hollywood stars such as Beyonce and Alicia Keys, and with L.A.’s own fashion turban maker Julia Clancey, who has outfitted Sienna Miller, Dita Von Teese and many more in her silk and sequin styles. 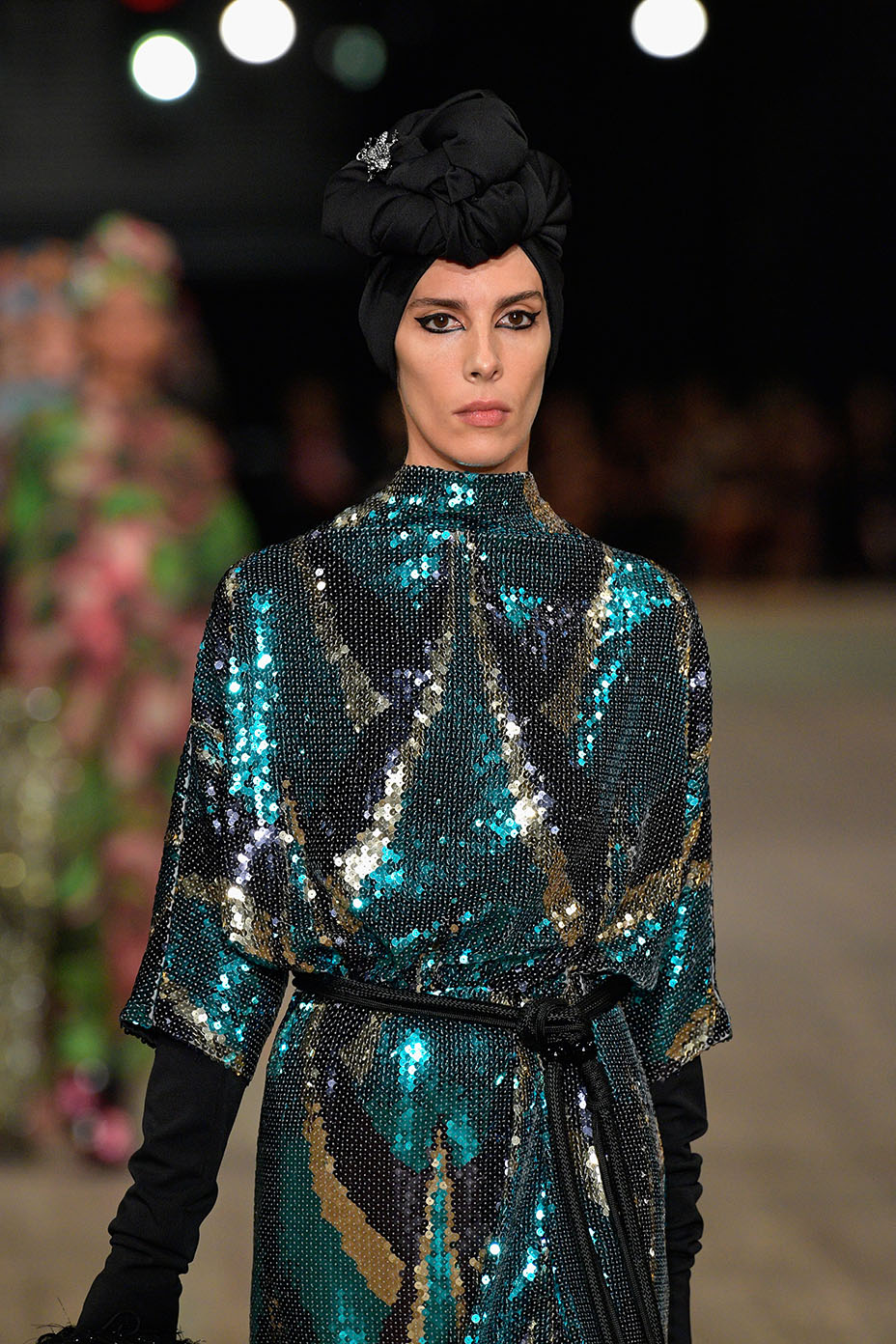 There was a charming naivete to the headgear, which is the easiest way to rock a look after all, and the collection, too, which was a rich, global tapestry of layered nylon anoraks, sweatpants, twill blazers, clashing patterned dresses and colorful fur-trimmed coats that brought to mind the spirited style caught by such photographers as Stephen Shore and the late Malick Sidibe, and even that eccentric style icon Little Edie from Grey Gardens. 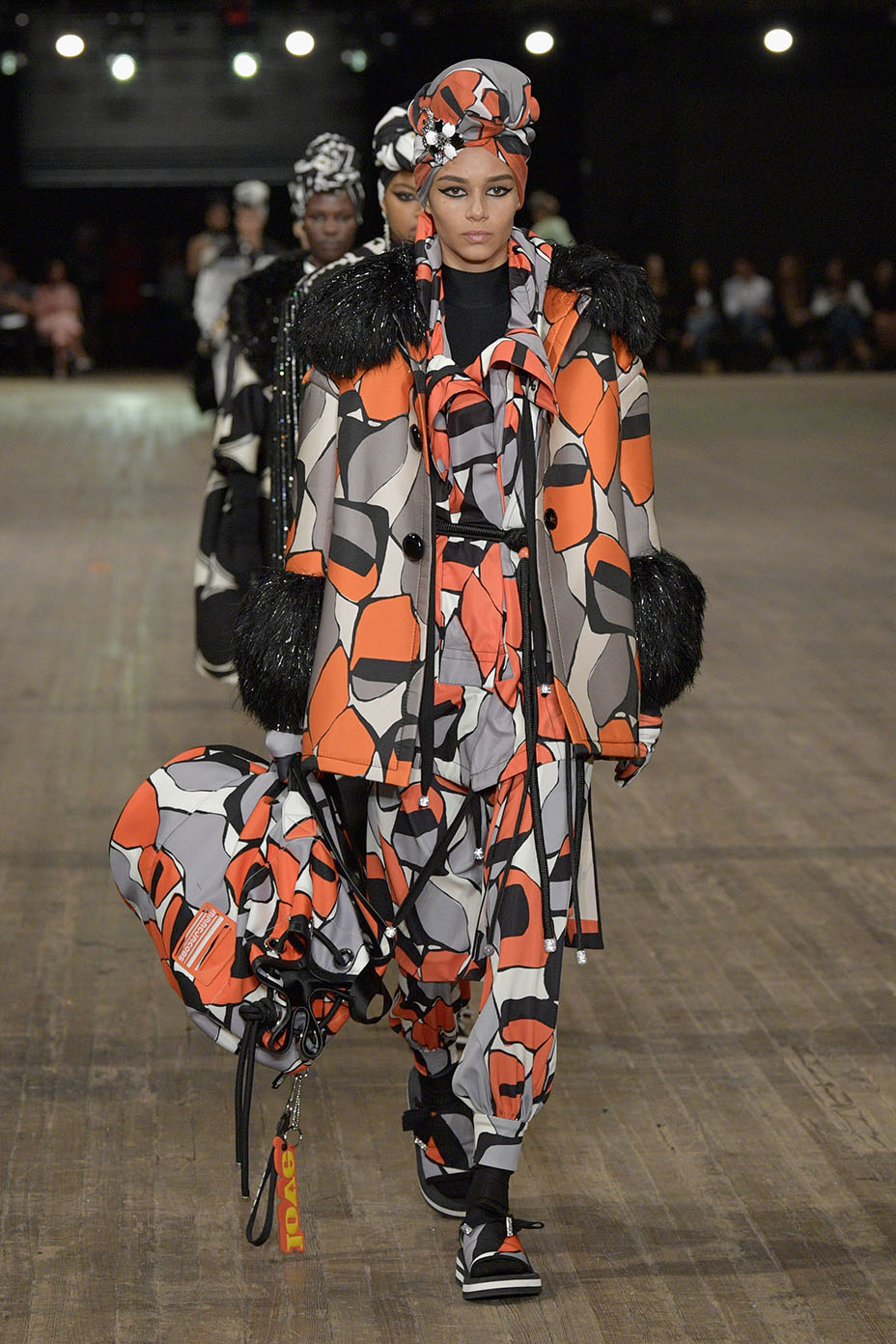 Kaia Gerber, Cindy Crawford and Kaia Gerber’s 16-year-old mini-me, who is the face of Jacobs’ Daisy fragrance, walked in the show, modeling a sequin robe-style gown in one of the season’s favorite colors: sunny yellow.

Fanny packs, flight bags and duffels were made for travel, and sport sandals and baboosh slippers adorned with fringe, pompoms and jewels added to the kind of fashion fantasy that isn’t just born of a runway, but from any person’s stylish reality. 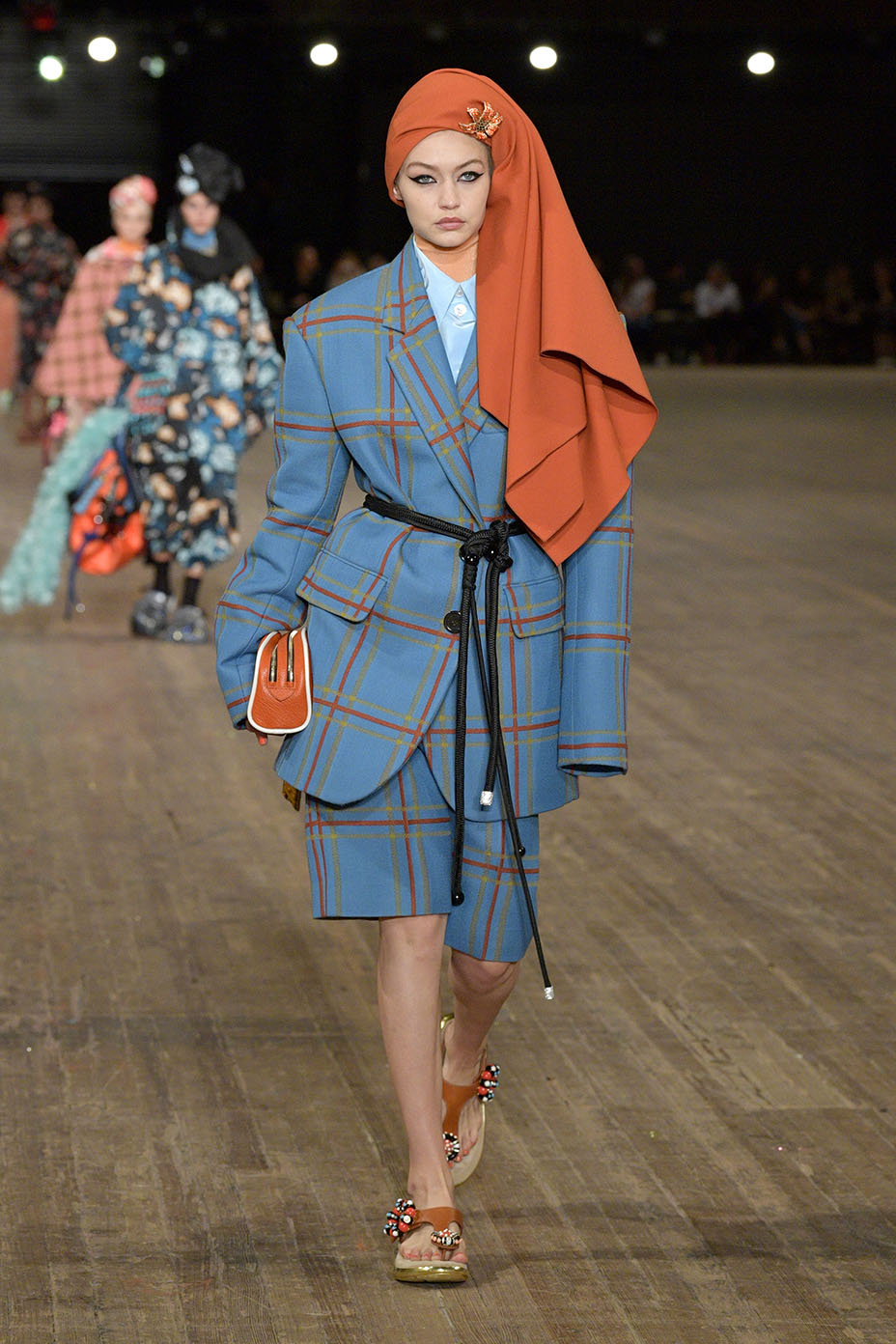