While other designers this season honed in on iconic aspects of America’s rich recent past — from Raf Simons’ ode to classic ‘70s horror flicks at Calvin Klein to Stuart Vevers‘ tribute to ‘80s artist/activist Keith Haring at Coach — Marchesa’s Georgina Chapman and Keren Craig and Delpozo’s Josep Font had more far-flung inspirations in mind.

Japan through the eyes of American heiress/explorer Aimee Crocker, who visited the Far East in the early 20th century, served as the jumping-off point for Marchesa’s spring collection, which incorporated pearls, golden threadwork and kimono sleeves into the red-carpet-ready designs. A strong color palette of tea green and contrasting fuchsia was tamed by more hazy shades of gray, lavender and purple, offering a little something for all of Marchesa’s stylistically diverse fans, from Jennifer Lopez to Katie Holmes to Blake Lively. 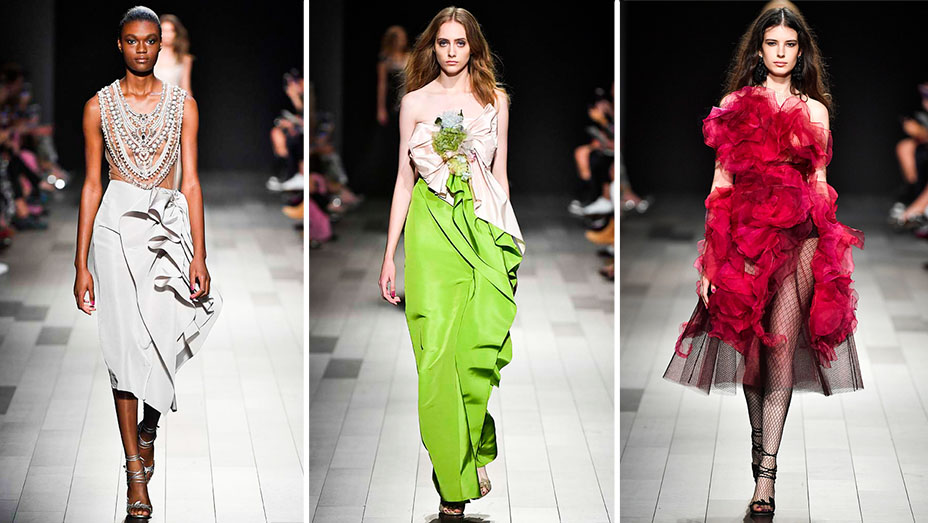 Standout pieces include a swingy floor-length dress with a deep V neckline and ombre fringe that swished in such a satisfying manner as the model made her way down the catwalk.

As is their signature move, designers Chapman and Craig added plenty of sculptural detail to their romantic dresses by way of ruffles, tiered skirts and elegant trains, some of which featured a netted overlay covered in hand-curled rose swirls of silk organza.

Font, who hails from Spain, dove into the Swimming Pool series by self-taught Slovakian photographer Maria Svarbova as the source of his inspiration. The designer drew upon the artist’s cool color palette of soothing, chlorine-tinged blue waters contrasted with equally bright poppy-red swimcaps that Svarbova photographed on swimmers at various pools around Slovakia, as well as the aesthetically pleasing symmetry and simplicity of her work. 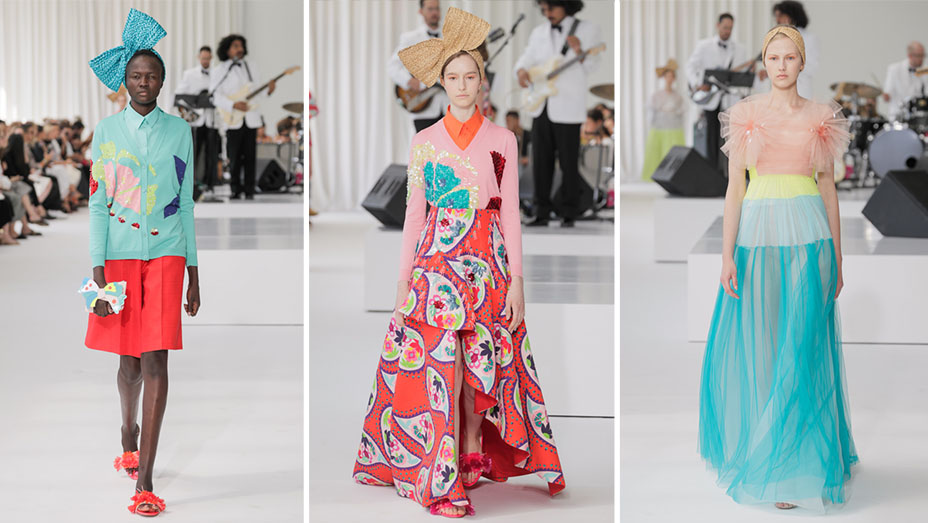 The geometric patterns that both Font and Svarbova gravitate toward were recognizable in the white and blue hexagonal textile spotted on a few dresses and tops, which were reminiscent of pool tiles. Gowns with long trains featuring pops of DayGlo yellow and blue, balanced by taupe accents, were more wearable than some of the architectural pieces in the collection, a perfect choice for demure red carpet fans like Julianne Moore or Rose Byrne.

For the more sartorially adventurous customers (think: Zendaya), the bright paisley patterned pieces with jarring shocks of color that are undeniably Delpozo might be a more fun choice.