She may be a first-time Oscar nominee, but Margot Robbie looked nothing like a rookie as she arrived at the 2018 Oscars in a white Chanel gown and jewelry  (no surprise, given the announcement that she is a new brand ambassador for the storied French fashion house), paired with Roger Vivier heels.

“Through the whole tour, our theme was inspired by pictures of ‘90s supermodels like Carla Bruni, Amber Valletta and Tatjana Patitz having fun and going out to the Met Ball,” says Robbie’s stylist, Kate Young. “That’s where the minimal shapes and bright colors have come from and why we were very into Versace. Margot’s super-young to have accomplished all of this, so I wanted it to feel that way–very cool and representative of her as a person. Sometimes evening gowns for the Oscars can be aging, in a way, with heavy embroidery or heavy jewelry. The embroidery on this dress is really modern and interesting.”

“She’s wearing diamonds because I love the energy of big stones. Everybody’s into crystals and diamonds are the biggest and most powerful crystals. But it can also be a minefield because they can make you look like the Queen of England in a hot second. So part of it was finding diamonds that felt cool and authentic.” 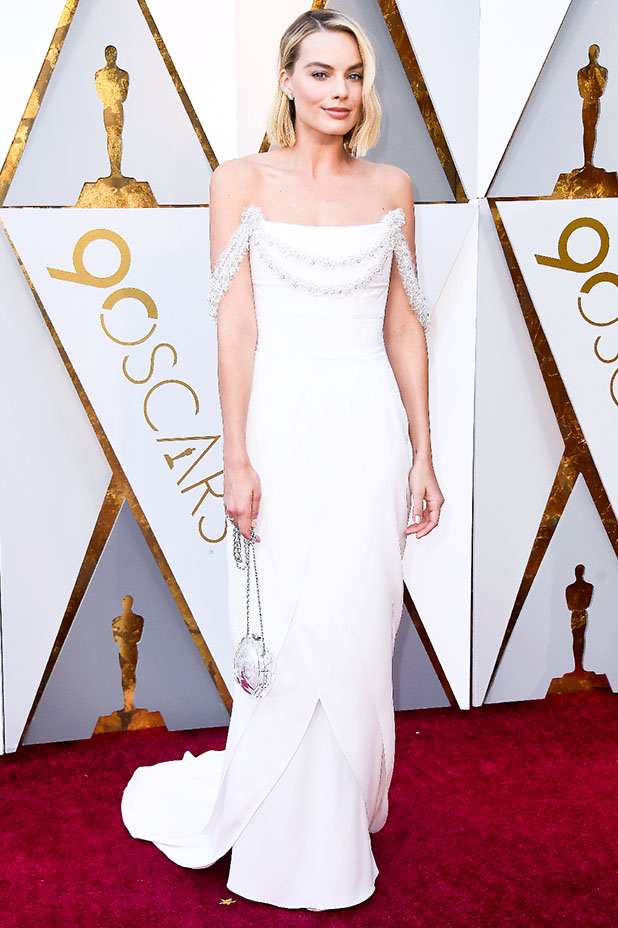 Robbie is nominated for best actress for her titular role in I, Tonya. She is up against fellow nominees Frances McDormand (Three Billboards Outside Ebbing, Missouri), Saoirse Ronan (Lady Bird), Sally Hawkins (The Shape of Water) and Meryl Streep (The Post).