Now that the 2020 awards season is over for the TV industry, Marvelous Mrs. Maisel star Alex Borstein can be found in Europe and the U.K., where she’s working on a live show that may become a televised special in the U.S. Dubbed “Alex Borstein and the Amstergang,” the night of stand-up comedy and songs with two friends, musicians Eric Mills and Salva Rey, is “broad and over the top, satirical songs and parodies, original songs and some covers — it’s silly and intimate and downright filthy,” Borstein says during a late-night call from Barcelona, where she lives with her two children, Henrietta and Barnaby, between filming seasons of Amazon Studios’ Maisel.

Borstein’s onstage dress for her Amstergang gigs also reflects another recent project: Henabee’s, a line of attachable sleeves that allows women to convert a sleeveless dress into a look that boasts a bit of arm coverage. The collection currently comprises four styles, all in different types of sheer black fabric; each pair of sleeves is accompanied by reusable wardrobe tape so the wearer may use them across multiple dresses, while their petal shapes allow for easy fit and movement.

“I like to add a couple of stitches at the shoulder to feel like they’re definitely not going to go anywhere, and also if you’re going to be pulling a jacket on and off,” Borstein notes. “But for my tour, I’ve been wearing this cool vintage black dress, and the Josephine sleeves are on there permanently. I stitched the hell out of them.” 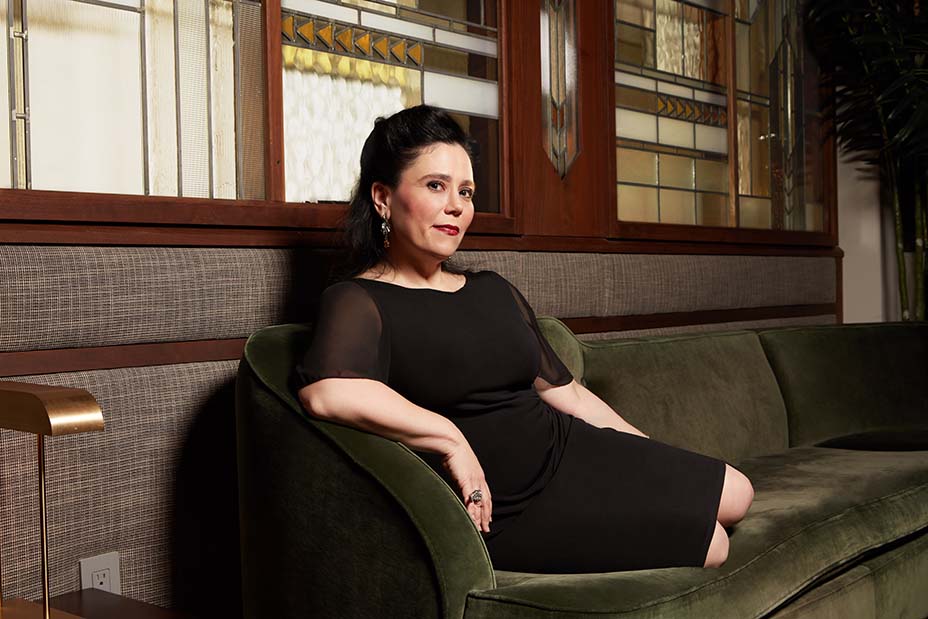 The idea for Henabee’s — the name is a play on her children’s names — germinated when Borstein was searching for something to wear to the 2014 premiere of A Million Ways to Die in the West, the 2014 comedy western directed by and starring Family Guy creator Seth MacFarlane (Borstein is an Emmy winner for her work as Lois Griffin on that animated program).

“I found this cute dress from Ted Baker; I loved it, and it fit like a glove, but it had these weird sleeves. I’m not even sure who they’d look good on,” Borstein recalls. “I ended up wearing this little crocheted shrug, but when I saw the photos, I thought, ‘What the hell? Because of that shrug, the dress was no longer cool.’”

For a subsequent public appearance, Borstein and her mom cut up a sheer shirt so she could attach those sleeves to a different dress. “I kind of loved it, and I thought there was something to this idea,” she says. Working with a seamstress, Borstein created a more polished version with a sheer polka-dot fabric; later, while filming The Marvelous Mrs. Maisel in New York, Borstein was able to track down the resources needed to expand the idea into a business. 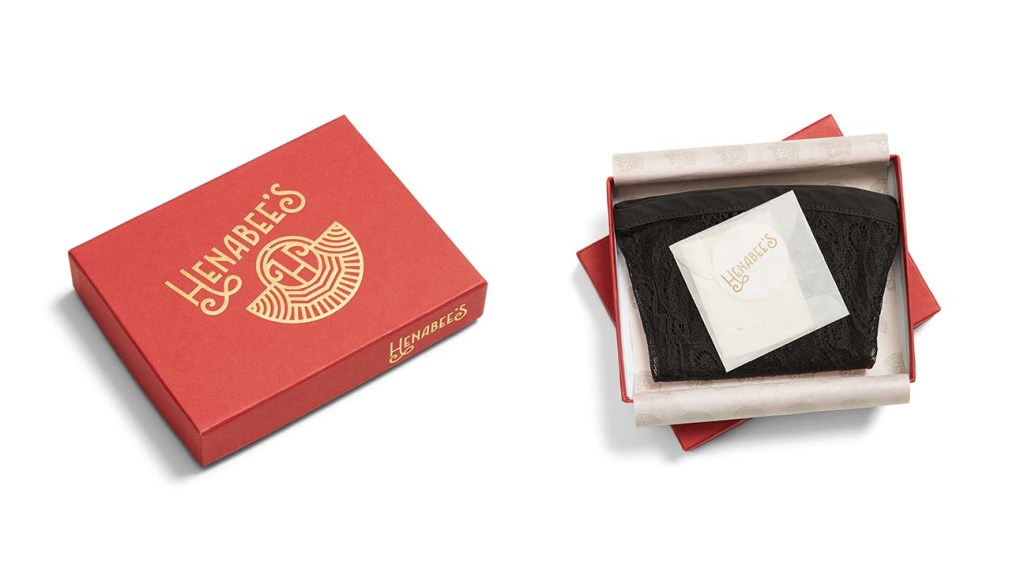 Why does she love the ability to add sleeves to any sleeveless look? “I’m just not a fan of arms and armpits,” Borstein explains. “Jennifer Aniston is so gorgeous, but I look at the [vintage Dior gown] she wore to the SAG Awards, and I just think, God, I wish that had sleeves — and she has perfect arms! But all bare arms look like raw chicken to me. So it’s not about bad arms or good arms; I like fabric. I think it’s sexier to be a little more covered up.”

A fan of all things vintage, Borstein christened each of the four styles with the first name of an iconic woman: a black lace for Anna May Wong, a sheer black chiffon for Josephine Baker, a sheer black cross-hatched fabric for Madeline Kahn and a sheer black polka-dot style named for Tillie Baldwin, a rider and performer in early 20th century Wild West shows. “Madeline Kahn was an idol of mine, so that’s how that came about,” Borstein says. “I love anything that has a vintage Hollywood feel about it. Almost everything I wear has a vintage-inspired vibe about it.”

Castmates Rachel Brosnahan and Caroline Aaron have tried Henabee’s, while Jane Lynch, Niecy Nash and Brooke Adams, wife of Maisel co-star Tony Shalhoub, likewise have worn them. “Women really love how they can rock a different top or dress and give it a whole new look,” Borstein says.

As a multiple Emmy winner on a buzzy hit show, Borstein likely could work with a designer for red carpet styling, but she points out that she’s far happier putting together her own look, regardless of whether her Henabee’s sleeves might be involved. “I haven’t worn anything by any big, fancy designer — that would just feel strange to me,” she says. “I find more joy in the organic process of finding something I really love. And my mom is a bit of a jewelry whore, so all the jewelry I wear is either mine or hers. That feels more special to me. And let’s face it: I’ve always been a bit of a bumpy, curvy girl. I’d love to be built like Charlize Theron, someone who’s six feet tall, and fabric hangs perfectly, but she’s like an alien from another planet. She’s a piece of elegant floor-to-ceiling velvet drapery, and I’m a Levolor blind.” 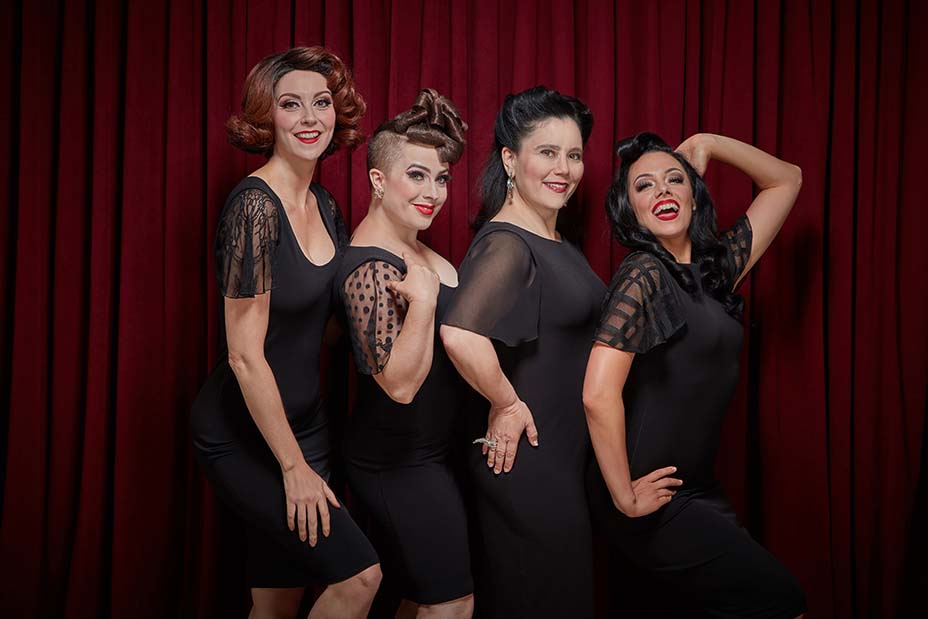 The Henabee’s sleeves continue to be made in the U.S., among the reasons they’re priced at $68 per pair. “We’re making them in the U.S. and using fabrics that are really nice and high-end, and we don’t want to do it without paying people livable wages,” Borstein says, adding that she’s patented the idea, while future plans may include expanding the line’s color palette and perhaps venturing into detachable sleeves ideal for brides and bridesmaids.

Henabee’s is available through its website, as well as lingerie specialty stores such as Jenette Bras in East Hollywood, West L.A. and Pasadena, owned by Jenette Goldstein, the actress whose work includes Aliens and Terminator 2. “Her stores are just brilliant, and I love the idea of Henabee’s being alongside lace bras and panties, because they’re also a beautiful adornment,” Borstein says. “We’ve had great success with little boutiques, but I’m really trying to stay hands-on with this. We’re not in any hurry to turn it into a massive thing; for now I want to hold onto it and keep it near and dear.”