Known for his meticulous dress sense, director Guy Ritchie wanted each of the actors in his latest movie, The Gentlemen, to be well put-together, even if their characters are on different rungs of the social ladder. “Guy wanted a compelling, urban look for The Gentlemen that is quintessentially British,” costume designer Michael Wilkinson told The Hollywood Reporter. “The characters are a little larger than life. We had fun with the costume choices. Guy didn’t want anything boring or obvious, but it was important not to go overboard and to find a relatable grounding for each character.”

Set in England, the story centers on Matthew McConaughey, who plays a drug lord wanting to sell off his profitable marijuana business to the highest bidder, while having to fend off shady figures who would likely rather steal it out from under him.

“We wanted to create an original, very specific look for Matthew’s character, Mickey Pearson, so we decided to make all of his suits ourselves using our amazing tailor, Sheikh Ali, who constructed the suits in his workroom in Manchester,” Wilkinson says. “His costumes show a modern take on classic English tailoring — extremely high quality but with a younger, less constrictive vibe. Matthew wears his suits like a second skin. His character is absolutely at ease with his status. I chose luxurious fabrics for the suits to exemplify classic English tailoring (using windowpane checks and Prince of Wales checks, for example) woven from beautiful wools, cashmeres and silks.”

McConaughey liked the suits so much, he took a few home with him. “He said they were the most comfortable suits he’s ever worn,” Wilkinson says. “Because of the way we cut the suits, and because there was so much cashmere in the fabrics, the suits were soft, light-weight and molded to his body. Fortunately, we had doubles of a lot of them because of the stunts in the show, so the film company still has some of his suits in their archives.” 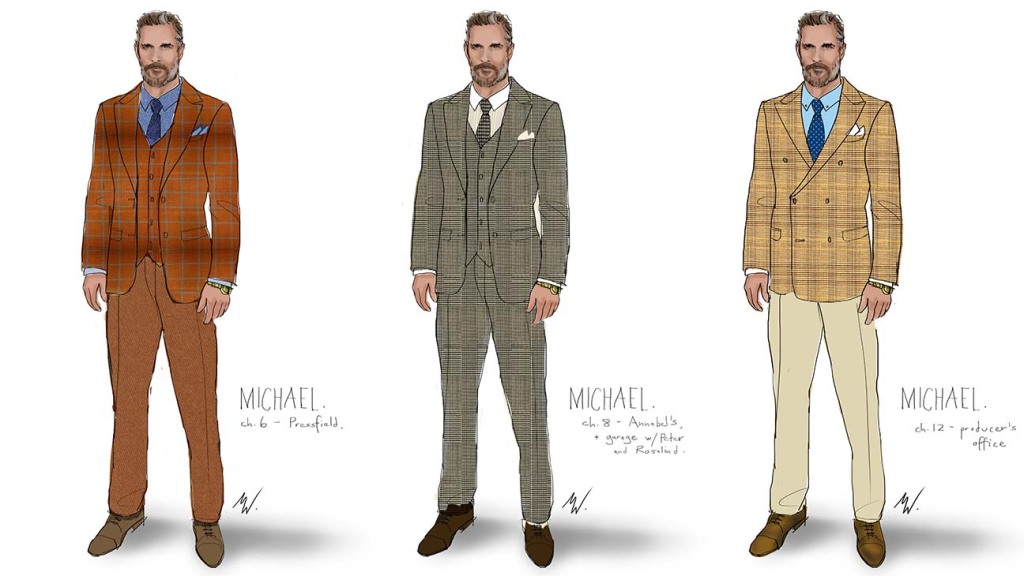 The film also stars Charlie Hunnam, Hugh Grant, Michelle Dockery, Colin Farrell and Henry Golding in a highly stylized modern world. “The characters and situations have an irreverent, heightened quality to them that echoes the tone of Guy’s earlier films, but with an updated feel,” adds the London-based Wilkinson, who was nominated for an Oscar for his work on American Hustle.

Wilkinson, who worked with Ritchie previously (on his most successful box office grossing film to date, Aladdin) says they looked for simple elements for each costume that would define and differentiate the characters from each other. “We have characters from different worlds, but everyone absolutely cared about their look. From the wealthy drug lords in classic Savile Row tailoring to the nouveau riche mafia bosses (both new-school and old-school), the street gangs, and the council estate boys. Everyone put their look together with pride and wore it with 200 percent commitment. We made a lot of bespoke pieces!” Wilkinson says. 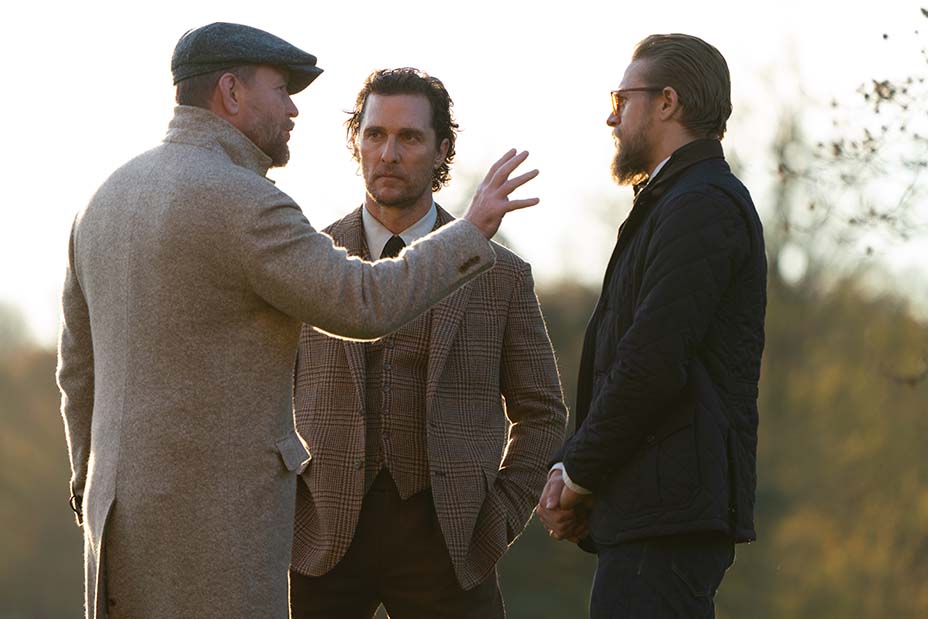 Pearson’s right-hand man, played by Hunnam, has a more relaxed look. “With Charlie’s costumes, we wanted to show a more casual side of English style,” Wilkinson says. “He combines tailored pieces with quilted Barbour jackets, knitted ties, tweedy waistcoats, chunky knits and beautiful bespoke boots. Charlie’s character has an [innate] sense of style. The fact that he’s engaging in less-than-legal activities does not inhibit his appreciation of well-cut, well-made clothes!” Wilkinson says.

Hunnam shares a number of scenes with Grant, one of which is staged memorably around a barbecue grill that Ritchie himself designed. Grant’s tabloid private investigator, who is out to extort Hunnam’s character Ray and his boss, Mickey, also happens to love movies. “Hugh Grant’s character modeled himself on the great film directors of the 1970s, but interpreted with a lecherous, creepy vibe that Hugh loved!” says Wilkinson, who adds that Grant modeled his look on Federico Fellini and private investigators he knows in real life. 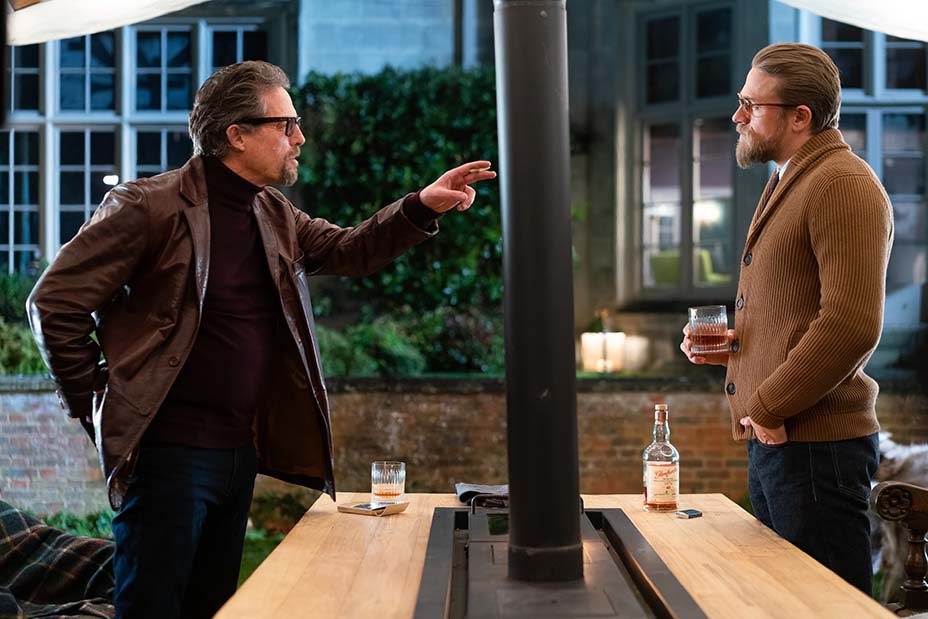 The key to Grant’s character was finding the right pair of glasses, so they chose a classic pair of Ray-Ban 2140 Wayfarers, but he added a reddish-brown custom lens that had an unsettling shade of grayish-purple. “We made a leather jacket for him and distressed it so that it looked like he lived in it, and paired it with high-neck sweaters and crocodile-skin boots,” Wilkinson says. 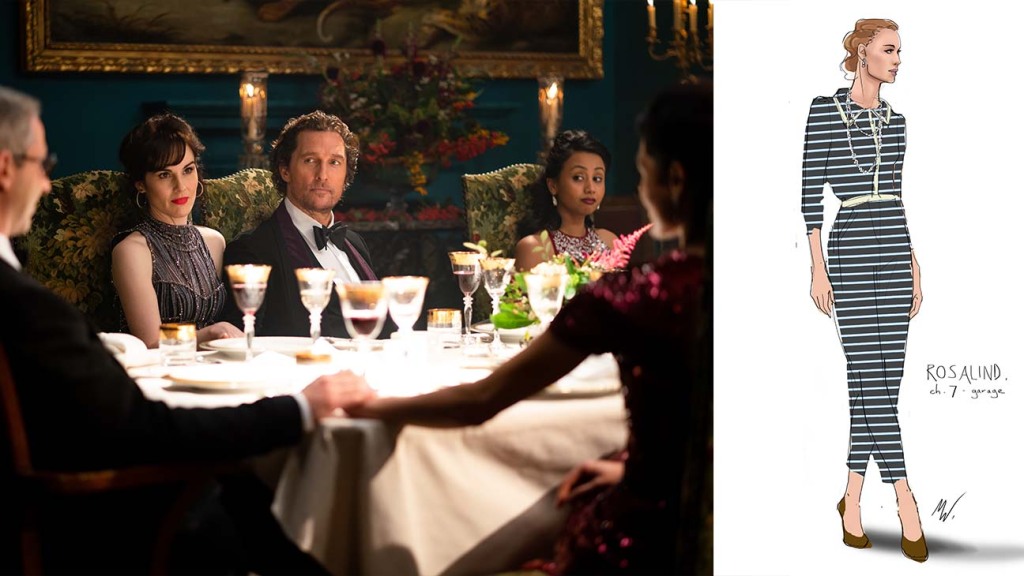 For Dockery, playing McConaughey’s assertive wife, Rosalind, aligned closer to her East London background than any other film she’s done before. “Rosalind wears luxury labels with a throw-away aplomb,” says Wilkinson, who dressed her in Balmain, Ralph Lauren, Carolina Herrera and Stella McCartney. “Her character would have grown up in a very different context to her current one, but we wanted to show that she was very much at ease with her ascent. She has a solid grasp of the nuances of fashion, and dressed fearlessly and effortlessly. Her style is classic English with a modern, dramatic impact — black and white, strong shoulders, graphic stripes and bold silhouettes. Much of Dockery’s looks encompassed pearls, boots, fur, cashmere and sharp tailoring.”

Golding, in a major departure from his breakout in Crazy Rich Asians, wore labels such as Dunhill, Smelly and Belstaff to play against type, as Dry Eye — a young gangster trying to rise in the family ranks.

“Henry’s character shows the new generation of well-dressed English gangsters,” Wilkinson says. “His trademark items are an expensive leather jacket with a fur collar ,a high-neck merino wool sweater, and tailored pinstriped wool trousers. He wears a gold necklace, per Wilkinson, for added modern swagger. “He wants to be respected by the high-level, suit-wearing older mafia bosses, but is showing his own younger interpretation of English style, which is more influenced by street style,” he adds. “My favorite detail is his leopard skin Christian Louboutin loafers — Guy made sure they made it onto camera!”

Farrell rounds out the cast as a boxing coach who leads a group of youthful misfits, bound together by their desire to change their old ways in matching tracksuits. “We designed and manufactured all of the fabrics for the tracksuits for Colin Farrell and his crew,” Wilkinson says, adding that they created four bespoke designs. “We based them on classic English suiting fabrics, which we then enlarged, made more vibrant and printed onto a modern quilted technical fabric. We wanted to show how different groups of people have interpreted this classic ‘Englishness.’ In this case, a more modern update for streetwear and casual sportswear.” 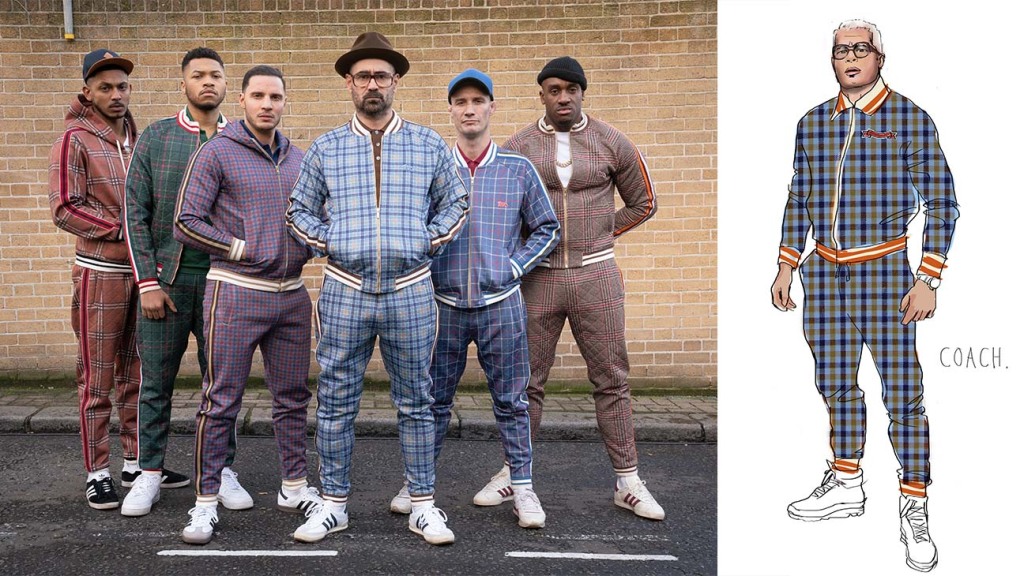 The social hierarchy that plays out in the film’s costumes is further established by its set design, thanks to Oscar-nominated set designer Gemma Jackson, who won an Emmy for her work on Game of Thrones season two. “To tell a story about a guy growing cannabis, you’ve got to have some pretty good-looking cannabis,” she told THR.

Jackson says making the marijuana look real and believable was her biggest challenge. But they found an Austrian craftsman who had made fake cannabis plants before. “We set up workshops and had schools of people learning how to make fake cannabis. It was a huge operation. It was hilarious!” she says. To create the underground marijuana houses McConaughey’s character set up, they made 365 plants and filled the rest in with a green screen. “I’ve still got one on my dining room table and when people come round, they’ll sometimes give me a second glance, and my husband will say, ‘Don’t say a word.’ They’re really that good!”

'The Gentlemen' Marketing: Is Style Enough?