Floyd Mayweather and Conor McGregor won’t face off in the ring for another two days, but the two have already had a showdown over what’s on their wrists — when they aren’t wearing gloves. Last month at a press conference in London promoting their fight on Saturday, Mayweather dogged his opponent by waving a $1.1 million diamond-encrusted Hublot Big Bang watch in his face and jeering, “You’re a microwave meal with a cheap-ass watch on — step your game up!” Mayweather, though, isn’t on solid ground challenging McGregor’s watch game. Both athletes have sensational timepiece collections, just very different ones, and are not shy about displaying them.

“To a degree, I think it’s kind of funny that Mayweather used his watch collection as an intimidation factor, because it’s not like McGregor’s collection is anything to turn your nose up at,” says watch writer Aaron Sigmond, the author of the forthcoming Drive Time Expanded Edition: Watches Inspired by Automobiles, Motorcycles and Racing. “Both men are very style driven in their own way. You have this juxtaposition in style, besides the fact that both of them are brutal fighters.”

Let’s look at how each fighter’s collections stack up. 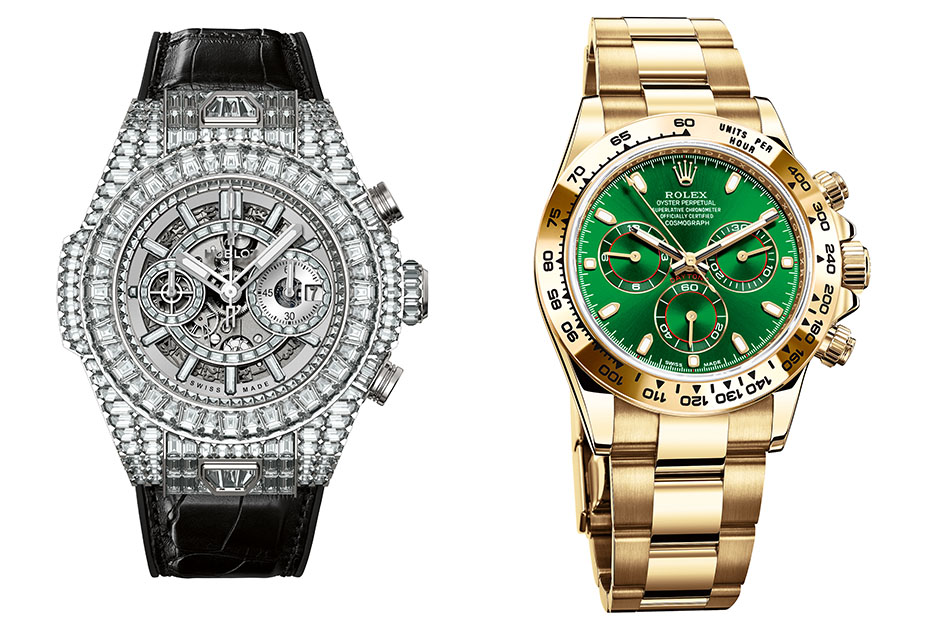 The undefeated professional boxer — who was the highest-paid athlete in the world three out of the last six years, according to Forbes — prizes watches that are covered in gems, pieces that make clear that they cost a lot of money to acquire. Many of his wristwatches are worth more than $1 million and are sometimes so covered in ice — often custom jobs done by jewelers after purchase from the watchmakers — that it’s hard to tell what the original looked like. (Some watch collectors refer to these types of watches as “commodity watches.”)

“Floyd is West Coast. He’s flash. I hate to use such an antiquated term, but it’s pure bling. Mayweather is just this amazing larger-than-life character and his watches really represent that,” says Sigmond (who predicts McGregor will win the match in a TKO or split decision.) On Instagram and Twitter, Mayweather posts haul-style pics and videos of his watch collection, once showing off seven diamond-covered Audemars Piguets (one for every day of the week) and a case of two dozen watches, almost all blanketed in gems. “I like to call these special time pieces ‘Wrist Art,'” he has said. In 2013, the boxer estimated he’d already spent more than $6 million on watches and has undoubtedly dropped $10 million by now on timepieces. Mayweather — the son of boxer Floyd Mayweather Sr. and the nephew of pugilists Jeff and Roger Mayweather — presents his watches as totemic symbols of wealth and success, in keeping with his overall image, which also includes his nickname (“Money”) as well as frequent Instagram postings of himself counting stacks of bills. “They say money doesn’t buy you happiness. I say neither does being broke,” he wrote recently on Instagram.

Two years ago, Swiss watchmaker Hublot took notice of his timepiece obsession, signing Mayweather to an endorsement deal ahead of his fight with Manny Pacquiao that included splashing the brand’s logo on his boxing shorts and gifting him a 48mm King Power WBC Full Pave with Emeralds watch with a green alligator strap and 248 diamonds. The company has just re-upped the sponsorship deal ahead of Saturday’s big fight.

Other watches that Mayweather has owned include a $1 million diamond-covered Hublot Big Bang Unico Haute Joaillerie that he wore in July at a fight press conference in Toronto; a green Richard Mille RM 59-01 Tourbillon Yohan Blake (worth around $620,000); a $1.3 million Audemars Piguet Royal Oak Offshore in white gold featuring 590 baguette-cut diamonds; a $2 million Jacob & Co. Rainbow Tourbillon; and a selection of Rolexes, including a Sky-Dweller, GMT-Master IIs, a Yacht-Master II, Day-Date Presidents and Datejusts, some kitted out with rubies, emeralds and sapphires.

“You see less watch and a whole lot more diamonds and bling,” says stylist and watch lover Terrell Jones, who dresses DJ Khaled and Fat Joe (and who thinks Mayweather will be the night’s victor.)

The Irish UFC fighter, who will be making his pro boxing debut on Saturday, is a devotee of two main watchmakers: Rolex (the primary brand he wears) and Patek Philippe (specifically its sporty-meets-dressy Nautilus style). “McGregor’s watches are a little bit more understated,” says Jones.

McGregor — who’s known for his love of perfectly fitted custom-made David August suits — wears most of his watches the way they were designed in Switzerland, without custom additions of diamonds later on. “There are two things I really like to do: whoop ass and look good,” McGregor has said.

While his timepieces typically do not cost as much as Mayweather’s, “McGregor has the much more classic watch collection,” says Sigmond. “The funny thing is that Mayweather is the classically trained boxer, while McGregor is the brawler. And it’s the brawler who is the more elegantly dressed.”

The fighter, who is the son of a taxi driver, is frequently seen wearing these Rolexes: a Day-Date 60th-anniversary with a green dial; a Sky-Dweller in rose gold with a chocolate dial; a Sky-Dweller in yellow gold with a brown leather strap; a Daytona in yellow-gold with a green dial; a black-dial Daytona; a Day-Date 40 in platinum with an icy-blue dial and diamond hour markers; a Day-Date 40 in gold with a champagne dial; and a Yacht-Master II in yellow gold with a blue ceramic bezel and white dial. “He’s clearly exceptionally fond of the brand,” says Sigmond. To date, McGregor has no formal relationship with Rolex. Other pieces in his collection include a two-stone stainless-steel and rose-gold Patek Philippe Nautilus with a blue dial (retail price around $60,000) and an all rose-gold Nautilus with a black dial. Two diamond-covered exceptions to his classic style are a blinged-out Franck Muller and an equally sparkly Audemars Piguet Royal Oak Offshore Chronograph.

In contrast to Mayweather, McGregor shows off his watches on his social media purely as accessories. There’s a more art-directed look to his IG shots, with his watches appearing as just one part of the scenery, not called out for special attention.

“There’s something about having a really nice, quality watch on your wrist. Especially on my left wrist,” McGregor told watch magazine Haute Time last year. “When I feel the weight of it, I feel like … it takes you back to the caveman days, when you’d kill an animal and you would take something and put it around your neck as a symbol of what we have done. ‘We have conquered this.’ When I have won a big fight and collect a big check, I’ll purchase a beautiful watch and I’ll put it on my left hand. My left hand that I have cracked on my opponent.”

By the end of Saturday night, it will be clear which one of them is in a mood to celebrate by adding a new watch to his collection.