The menu — sensitive to paleo, vegan and keto diets — has attracted the attention of Mandy Moore, Molly Simms, Haylie Duff and Lauren Conrad. After hosting baking workshops and then shipping cakes nationally since spring, Gallucci and Thomas opened their first brick and mortar store in developer Rick Caruso’s Palisades Village in September.

Both Santa Monica natives, the pair have come to host private classes for residents of the Palisades, Malibu, Santa Monica, Brentwood and Beverly Hills (where Gallucci is teaching one this week) based on the artistic recipes in their cookbook, Sweet Laurel: Recipes for Whole Food, Grain Free Desserts ($28). 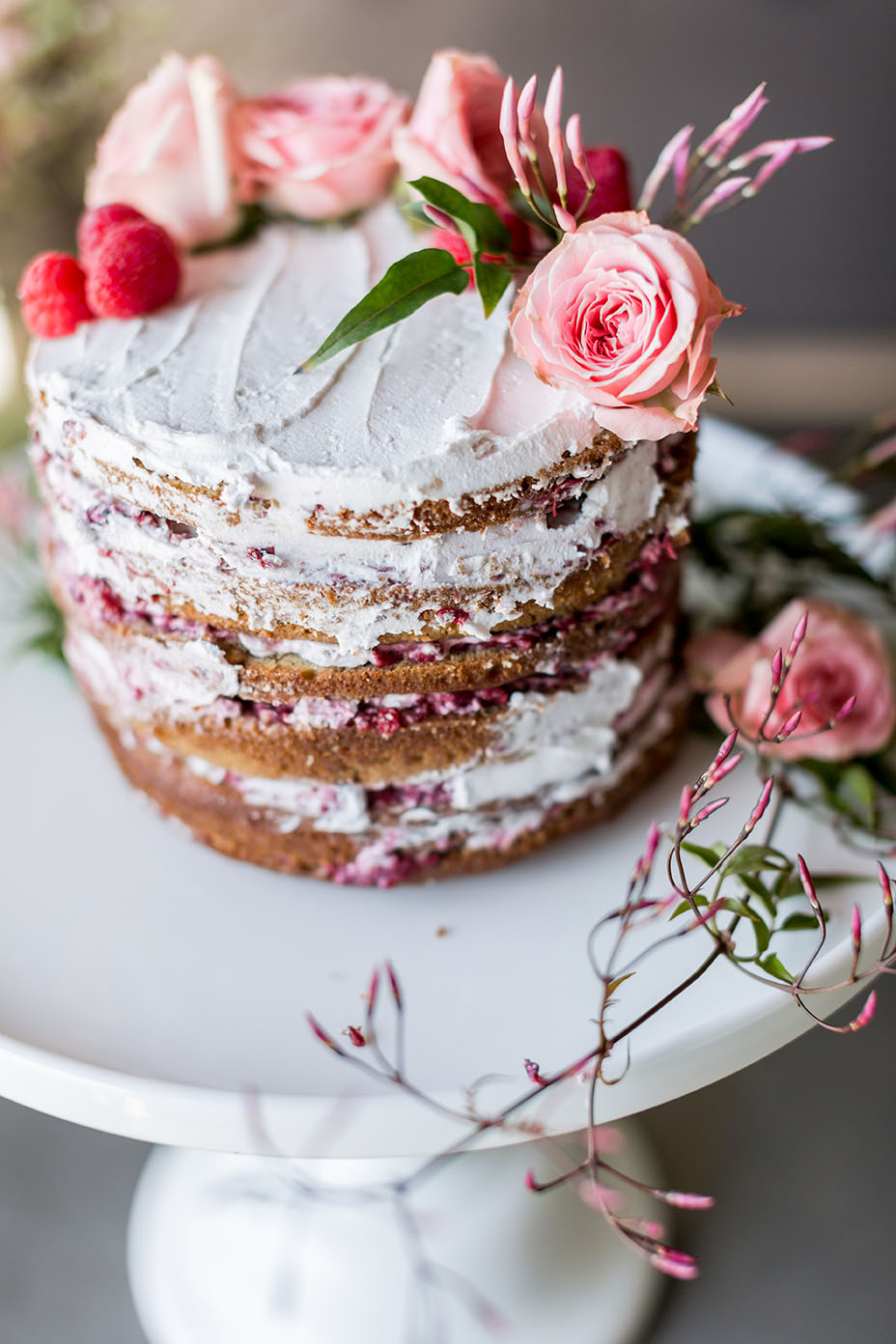 “She’s always been a huge fan of our cakes and goodies for how clean they are. I know she personally follows a very clean paleo-ish diet and obviously our cakes cater to that,” Gallucci says of the This is Us actress.

The duo taught the score of friends how to make the Sweet Laurel vanilla coconut jam cake from top to bottom using their specific aesthetic: real organic roses positioned in a distinctive crescent shape, while the cake remains “kind of naked and unadorned and very romantic, beautiful, messy, textural,” Thomas says. It was somewhat of a housewarming party, as Moore had just moved into her new home and finished renovations.

“Thank you Laurel and Claire for your patience, grace and know-how. As a gluten intolerant lady, their recipes are a godsend and I’m so excited that their cookbook is finally out in the world…but mostly I’m thrilled that I managed to assemble a 6 layer Vanilla Coconut Jam cake without it completely toppling over,” Moore wrote on Instagram.

When the offer of a cake decorating workshop with a bunch of my favorite ladies, led by (and celebrating!) the one and only @sweetlaurelbakery, was dangled in front of me, how could I resist?!?! Thank you Laurel and Claire for your patience, grace and know-how. As a gluten intolerant lady, their recipes are a godsend and I’m so excited that their cookbook is finally out in the world…. but mostly I’m thrilled that I managed to assemble a 6 layer Vanilla Coconut Jam cake without it completely toppling over. #grainfree #sweetlaurelbakery

In November, Sweet Laurel provided a cake installation for Moore’s wedding to Taylor Goldsmith. “She basically told me to choose flavors and do our most popular, fun cake flavors,” says Gallucci, who provided between 10 and 12 cakes in five flavors (chocolate caramel, vanilla coconut jam, mocha, pumpkin spice caramel and lemon coconut, starting from $65 each) that were arranged on tiered vintage cake plates. “She had a super beautiful, intimate wedding and we had that huge cake installation,” Gallucci adds.

The vintage style continues in their “360-experience” bakery in the Palisades, which was themed to look like an English garden inside a jewel box, achieved by painting it a shade of “antique pink” and adding velvet cushions, creeping rose wallpaper and delicate teacups. “It was inspired by the afternoon teas we grew up enjoying with our moms, so we wanted it to have this old-world feel, but still be very modern,” Thomas says. 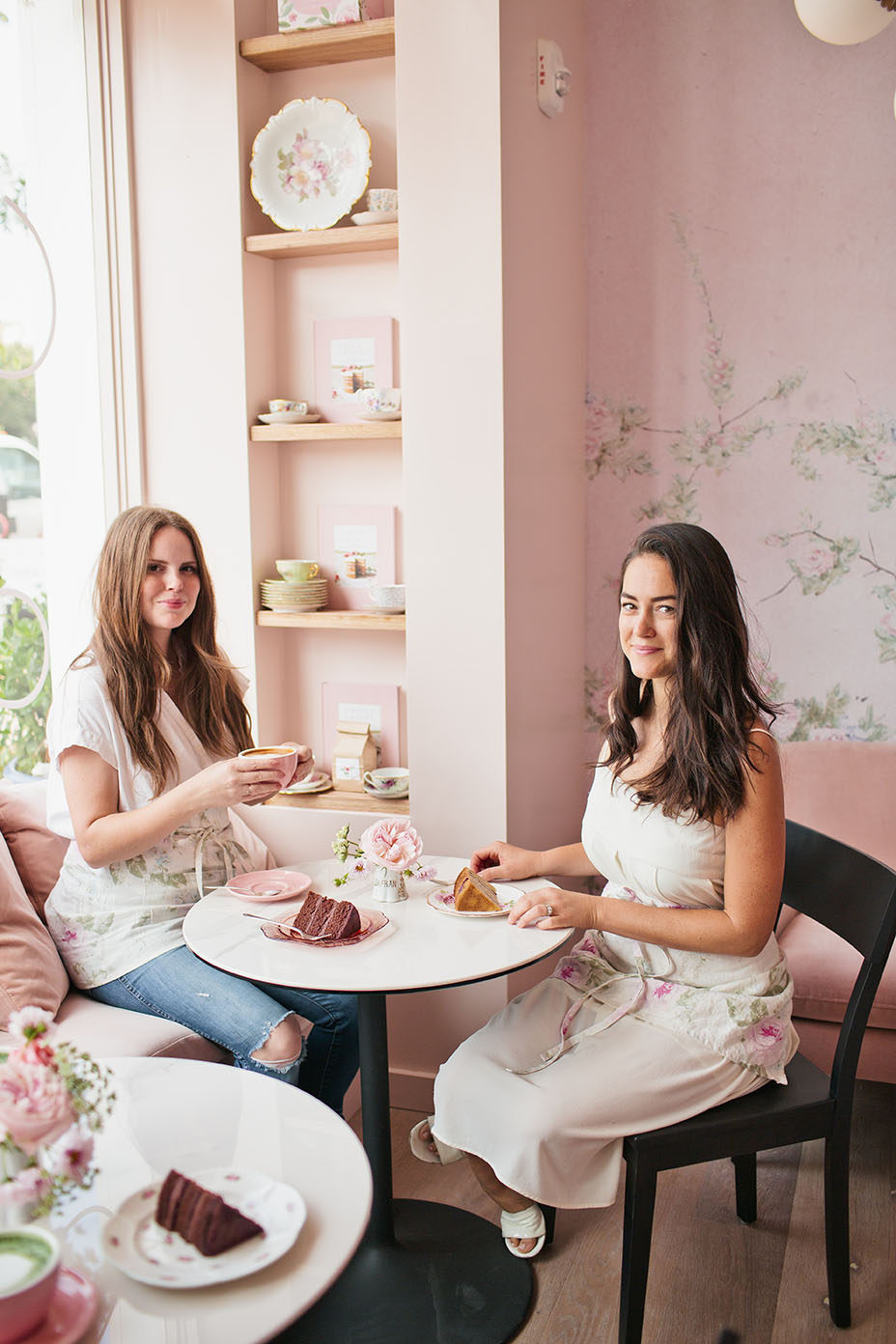 For the holidays, their Sunset Boulevard store is getting festive with paleo marshmallows on top of drinks and seasonal cakes ranging from the pumpkin spice caramel cake “that has a cult following” to the paleo pecan pie. This week they’re also selling cookie dough for Santa — pre-proportioned cookie dough that customers can take home to bake. The paleo, gluten-free and vegan dough is safe to eat raw and includes five ingredients: almond flour, coconut oil, pure maple syrup and chocolate chips handcrafted by a local artisan chocolatier, made out of just cacao and maple sugar. “They’re basically the cleanest chocolate chips you can buy,” Gallucci says.

In January, Sweet Laurel will host two baking workshops: one focused on clean baking Jan. 12 and one keto workshop Jan. 26. “I feel like everyone is on board with dessert this time of year,” Thomas laughs.

Using clean ingredients that fit different lifestyles is important to them, she adds. The origin of that story goes back to Gallucci’s own diagnosis of the autoimmune disease Hashimoto’s. She’d grown up baking for the holidays but she became so ill that she had to remove gluten, dairy and refined sugar from her diet. “It really changed my baking game. I wasn’t able to make the traditional cakes and cookies that I was used to making on the holidays,” Gallucci says. Her new, five core ingredients brought back the nostalgic flavors. 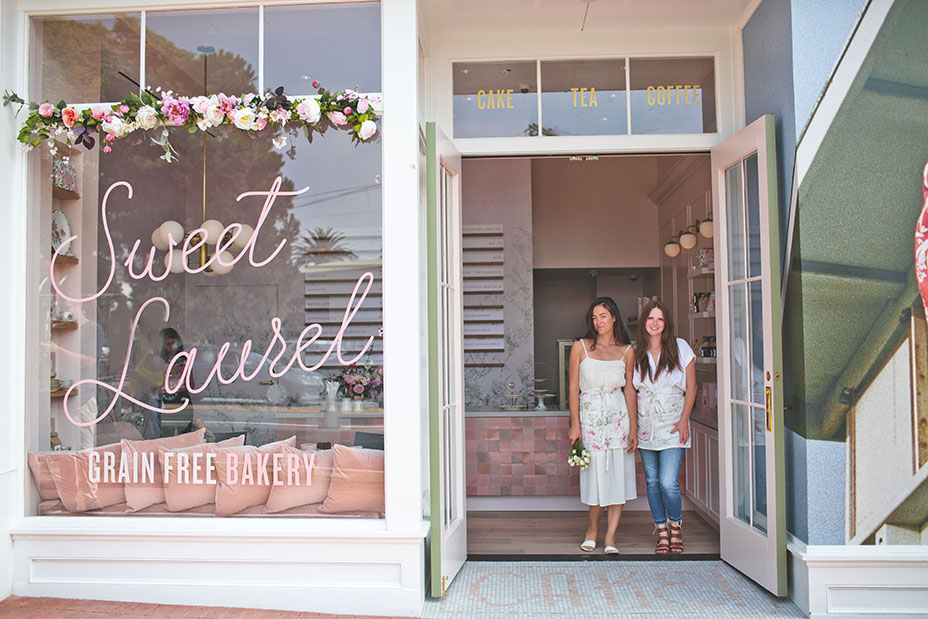 After months of experimentation, she started Sweet Laurel with Thomas, whom she met when they were college age, despite growing up five blocks away. “It was hilarious when we did meet. It was like, ‘How have we not met?’” Thomas says. They both loved going to the Aero Theatre and Caffe Luxxe as children. “I remember seeing her in my neighborhood as a little kid. She had this epic Barbie car…. So when we finally did become friends, it felt like it was a long time waiting.” They bonded over more than sweet treats — “We instantly hit it off over our love of L.A. history, old movies, cooking, baking, general nerdisms,” Gallucci says, while Thomas adds: “We’re both like 85-year-old women inside 30-year-old bodies. It’s so funny. We did knitting classes together.”

This shared bond of the city is what they bring to their floral confections, fit for the L.A. diet.

“We love our city. It’s an understatement to say we’re Angelenos. We were really sensitive to what an L.A. consumer would want, because we’re L.A. consumers. We really thought about it from a personal level,” Thomas says.