President Donald Trump and First Lady Melania Trump traveled to Palm Beach, Florida, for their meeting with President of the People’s Republic of China Xi Jinping and his wife, Peng Liyuan, at Trump’s Mar-a-Lago estate, where a formal dinner was held Thursday evening.

Melania stepped out in a red, wide-strap Valentino midi dress with daisy appliqués, priced at £3,268 ($4,053) on matchesfashion.com. (The dress is still in stock, in case you’re interested.) Instead of keeping the dress ankle-length, as seen on the model, the First Lady shortened it to mid-calf, revealing what is likely to have been another pair of Christian Louboutin heels. 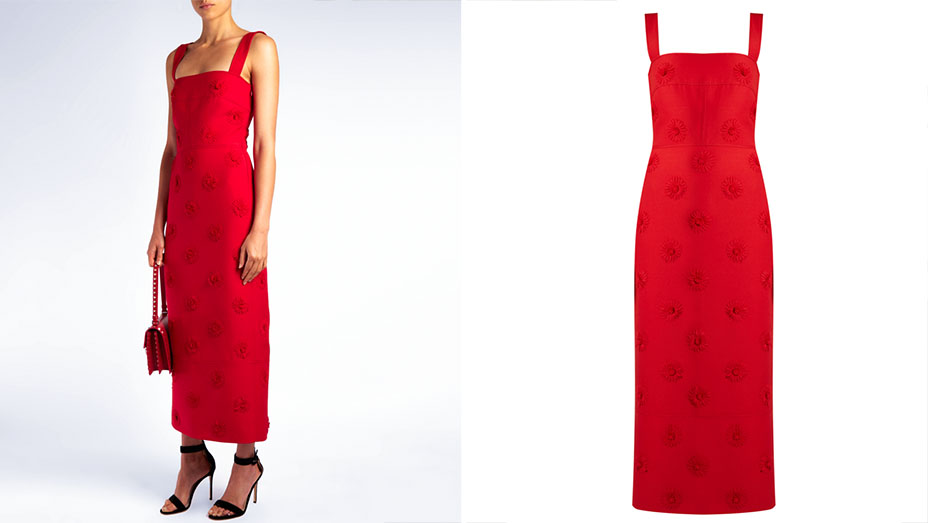 What’s most notable about Melania’s look is the color she chose, which suggests a form of fashion diplomacy since red is known to symbolize good fortune and joy in Chinese culture. Perhaps she took a page out of former FLOTUS Michelle Obama’s fashion playbook.

For a China state dinner in 2011, Michelle stepped out in an Alexander McQueen gown by Sarah Burton that was covered with a red and black petals. The former FLOTUS got flak for not choosing an American-Chinese designer then, however, she redeemed herself when she wore a custom mermaid gown by Vera Wang, a New York-born designer of Chinese descent, for the 2015 China state dinner.

Melania most recently wore a Dolce & Gabbana blazer for her official White House portrait, opting out of wearing a piece by an American designer.

Only time will tell if Melania will consider a U.S. designer for her next formal event.