In an act of sartorial diplomacy, first lady Melania Trump stepped out in Beijing, where she is currently accompanying President Trump on a tour of Asia, in a black embroidered Gucci gown inspired by elements of a traditional Cheongsam. The president and first lady were attending a state dinner hosted by Chinese President Xi Jinping and China’s first lady Peng Liyuan on Thursday evening.

The dress, from Gucci creative director Alessandro Michele’s fall 2016 collection, features an asymmetrical collar and trio of buttons typically associated with the Chinese garment. Gucci’s take, however, included the addition of pink fur trim on the sleeves. (Gucci announced earlier this year that they would no longer be using fur in their garments.)

A Look at Melania Trump's Style in Asia

On the runway, the look was styled with a turquoise cap and netted veil and metallic sandals, but Trump, with the help of stylist Herve Pierre, opted for her trusty pointy-toe stilettos — this time in cotton candy-pink — and beachy waves. Margot Robbie also wore the Gucci gown at the June 2016 premiere of The Legend of Tarzan.

Since embarking on her tour, the first lady has stepped out in a slew of ensembles from European designers, including Fendi, Dior, Dolce & Gabbana and Valentino, but no Chinese designers. The Sun reports that thus far, her Asia tour wardrobe cost 32,000 GBP (approximately $42,000).

First lady Michelle Obama was also known to make a statement of goodwill towards both hosts and guests of the White House, but she did so by choosing pieces by designers from the diplomat’s own country — for example, a Tadashi Shoji gown while hosting Japan’s president, or a Versace number when hosting Italy’s president. 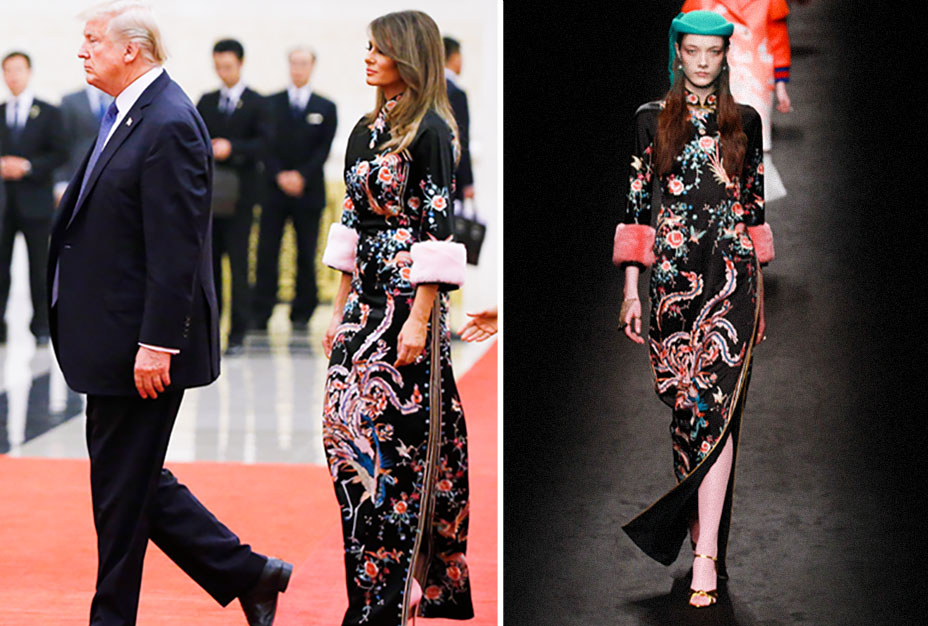