On May 19, amid Rihanna shutting down the red carpet in white Dior couture at the Palais premiere of Netflix’s Okja, I was given a less-glamorous style challenge of my own: Visit Cannes shops on a furious fashion expedition to find examples of the latest craze sweeping social media — the controversial men’s romper. With other deadlines looming, I and photographer Matthias Nareyek have 90 minutes to complete the mission. Call it: Amazing ‘Romper’ Race: French Riviera Edition.

Spoiler alert: I don’t find one. What I did find: good-humored opinions about the men’s romper trend, which began with a Kickstarter campaign and continued with the just-announced Reebok offerings. (And does anybody remember the time Andy Cohen promoted a similar Mr. Turk romper in 2015? I do.).

I see two young women on the sidewalk next to the popular Cannes watering hole Le Petit Majestic, and present the photographic evidence below. Thanks, Instagram.

••Would You Borrow Your Boyfriend’s Romper? ••The world of men’s fashion has gotten pretty wild lately, from sheer shirts and harnesses to designer jeans made to look like they were dragged through the mud. Now thanks to a new startup called Romphim, guys can add Nantucket red onesies to the shopping list of experimental trends to try this spring. But let’s be serious: Is a romper something that men are dying to wear? Apparently so—the company has already raised more than $45,000 on Kickstarter. The preppy pastel jumpers are built for comfort and come with an adjustable waist and a zipper so the brave men who don one don’t have to disrobe completely to use the bathroom like their female counterparts. #startup #boyfriend #romper #menstyle #trend #trendalert #trendsetter #trendsformen #streeatwear #stylegram #styleinspiration #styleoftheday #styleformen #fashiontrend #fashionmen #menstyle #menfashion #menswear #mensweardaily #menstyleguide #vogue #voguemagazine #romphim @romphimofficial

The young women, Stella and Fritzie, both from Berlin, had dramatically opposing viewpoints. An argument nearly breaks out, and we’re not even two minutes in. Yikes. 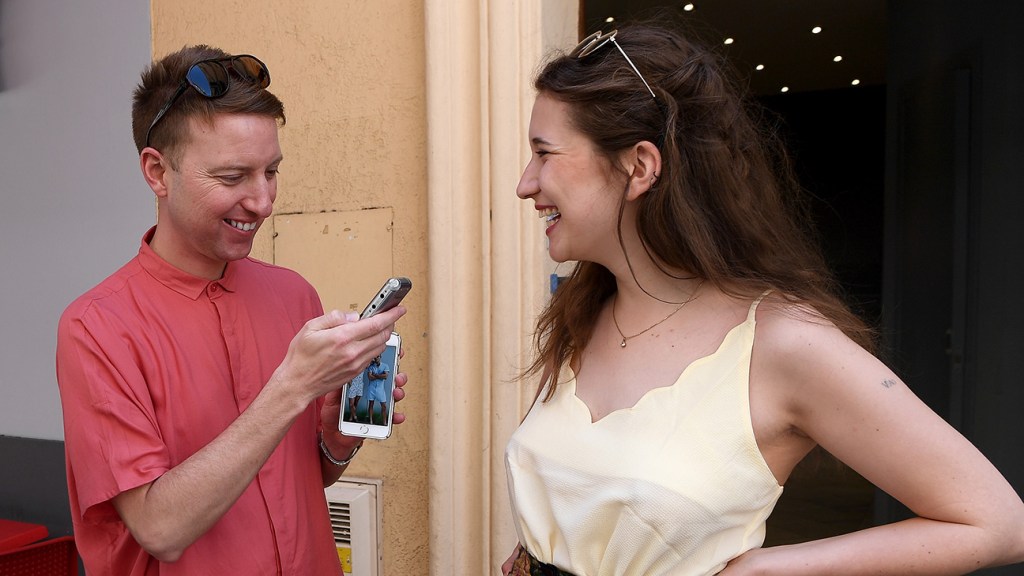 “It actually looks like a man who is caring too much about fashion, you know what I mean?” Stella says, before adding that if the man in the photo called, she’d hit ignore. “I wouldn’t be directly attracted to him. I wouldn’t look at him and think, ‘Oh my God.’ It would be more like, ‘Oh.’” Not Fritzie. She says why not. “It’s fun and I love men when they are proud of whatever they wear,” she says, laughing: “But it is a little bit weird.”

Nobody was laughing in United Colors of Benetton around the corner — on the fashion boutique-packed Rue d’Antibes — when I asked the three sales people if they had any rompers for men on the racks. The answer was no, but the dude in the photo says he has a men’s jumpsuit at home that he wears in the winter. Uh, OK. I cross the street to COS, where maybe, just maybe, they have rompers of the hommes variety. Nope. 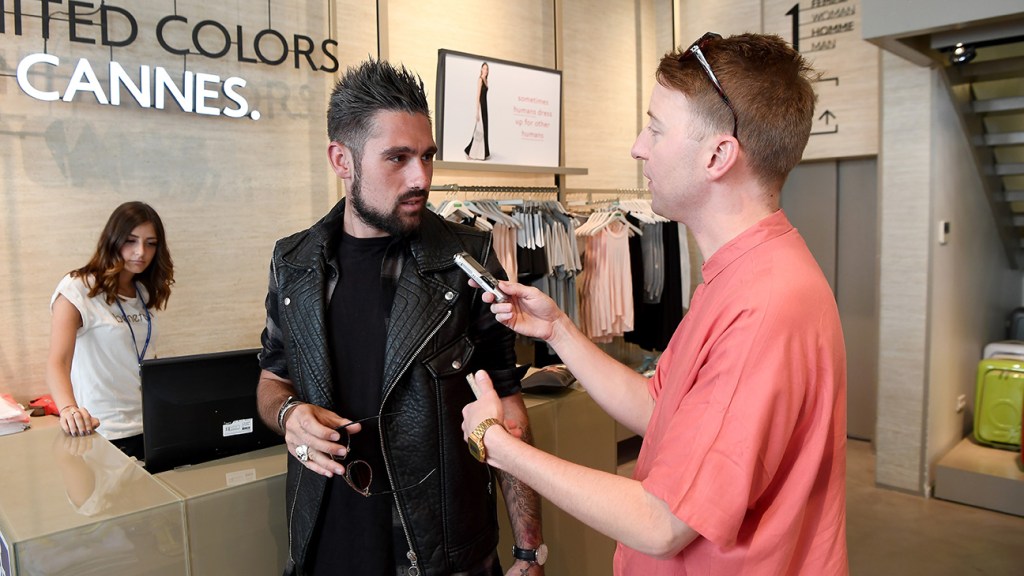 The clerk, named Eleanor, is sweet and tells me maybe they’ll be included in the new collection. Her male colleague has a romper at home that he might’ve purchased from a previous COS collection. He’s off today but since I’m not, I move on to the next. Tick tock. 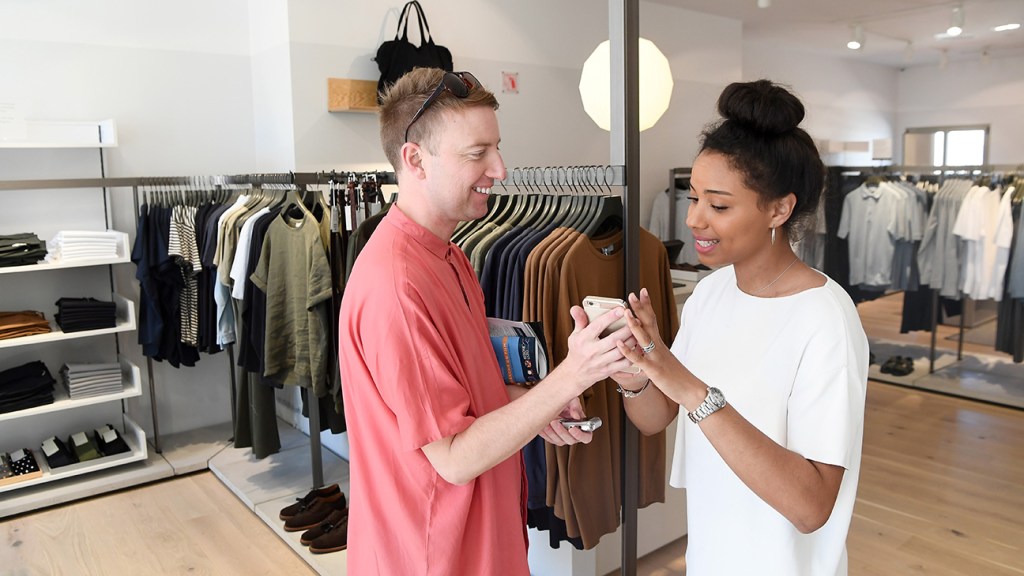 That brings me to The Kooples where I meet Cedric. He’s a 25-year-old man with an international pedigree, spending half of his time in Corsica and half in Quebec. Maybe that’s why he’s so diplomatic with his response: “I might not be comfortable enough to wear that combination, but I think some customers could be interested,” he says. “Our store, in particular, we don’t have. I would say you could try Zara or Sandro.” 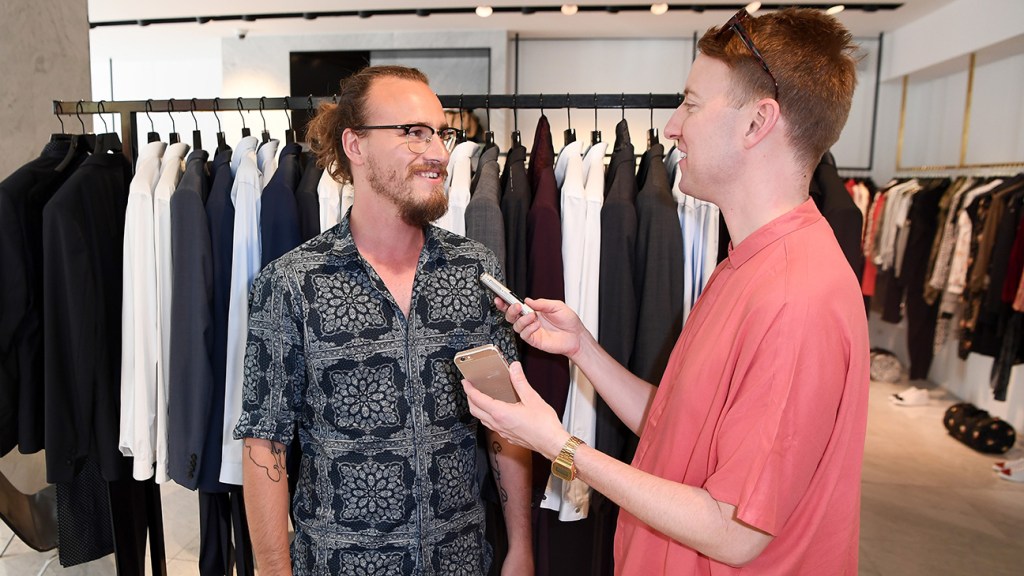 Lucky for me, Sandro is next door. The chic Parisian contemporary label has zero items in the romper department. But the 26-year-old staffer, who hails from France, loves the style. “It’s good for the summer. It’s not in the shops here so much, but I think in France, it could be good,” she says, before teasing another possible location. “You could [have found] it at Eleven Paris across the street, but it closed for good several months ago. Maybe Zara.” 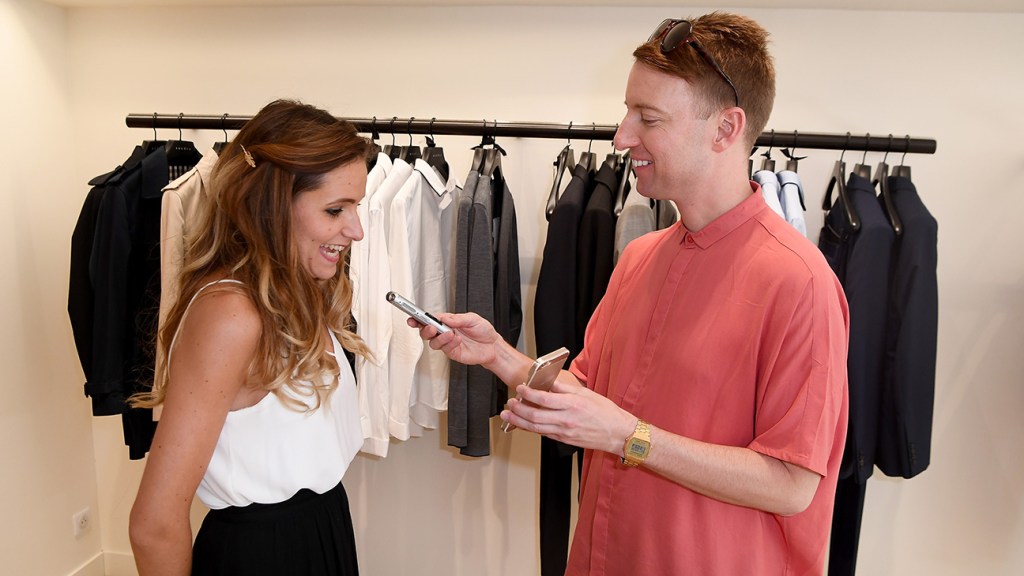 My photographer friend jokes that “this is not an easy task you have found yourself in.”  Zara is still two blocks away when I see a boutique called Father and Sons. We stick our heads in the men’s store and, while there are no customers, there are six staffers on the clock. A manager-looking type walks over and shakes his finger at me when I show him the Instagram photo. 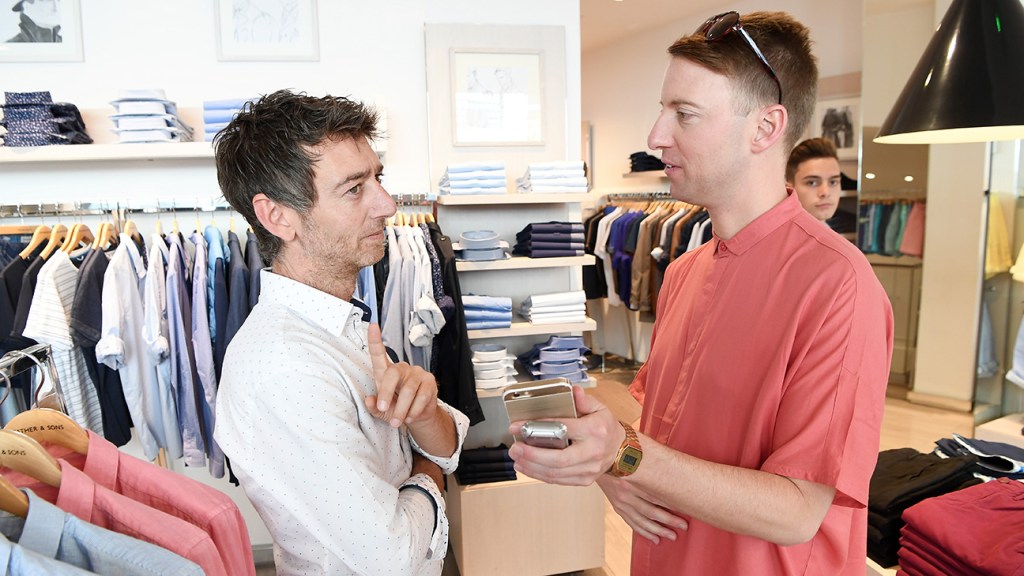 “Maybe you can find someone wearing one on the Croisette,” he sniffs. “There are funny people down there.”

“I saw it on Facebook,” laughs the Lacoste gentleman who works there. “But I can’t talk to you.”

Fortunately, there’s a festival happening and hundreds of people outside who will talk, like Selouane and Axel, both 19, who are outside the Lacoste store carrying flyers for fashion brand Celio. No rompers at Celio, but these teenage French gents — gasp — say yes to wearing the style should we find one. 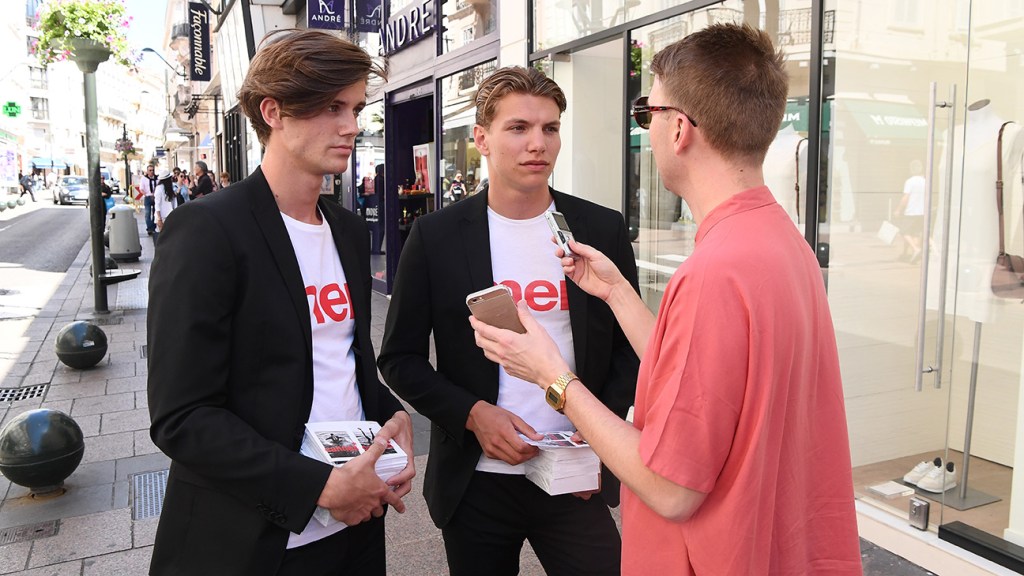 “I can wear it — not for every day but for a festival, maybe,” admits Selouane. “Yeah, why not?” says Axel.

Selouane has a girlfriend who “likes this kind of outfit, too,” and the revelation is a good segue to ask Axel how his significant other feels about the trend: “It’s complicated with my girlfriend right now, so I don’t think she would buy it for me. I’m actually single, but it’s complicated.”

It’s a psychological minefield out here on the Rue d’Antibes.

I’d love to get into why their relationship is complicated — I’m a nosy American journalist, after all — but there are rompers to find and Zara is next door. Could this be the moment we’ve been waiting nearly 60 minutes for? The anticipation …

The male clerk on the bottom floor shuts it down in a snap: “No, sorry. No. Not at all.”

Outside, I run into the master fragrance gent from The Harmonist, Guillaume Flavigny. I’ve just interviewed him two days prior and he laughs when I show him the picture on my phone. “I could wear that,” he says. “It’s funny and provocative.” Got that right, Mr. Flavigny. 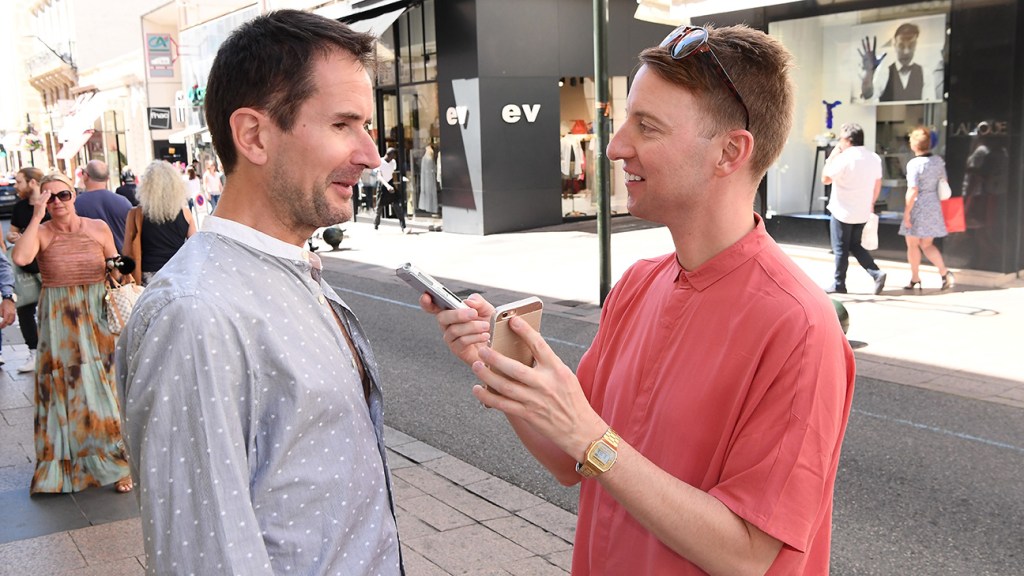 It’s not for the office, he continues, but maybe for a fun dinner with friends. “My kids would love it a little, and my wife, she will probably say that it makes [me look] gay but I won’t care.” Twitter has said the same thing, not about him but about the trend. Flavigny adds that the romper look is similar to his father’s swimsuit that he wore in the 1960s in Normandy, which he passed down to his son. “I wore it during a party and it was so funny,” he says. “I had a lot of success with it.”

We’ve had no success, so Matthias and I decide to turn left and head toward the beach and the ever-packed main Cannes drag called the Croisette. It’s a street not unlike Rodeo Drive — lined with luxury boutiques like Louis Vuitton, Dolce & Gabbana and Dior — and tons and tons of tourists. Every once in a while you can bump into an actor, which is exactly what happens when we spot a man in a close-but-no-cigar striped jumpsuit. “My name is Mehdi Toure and I’m a new actor with a film here,” he says, referencing the French gay drama 120 Beats Per Minute. “I’m really into jumpers and rompers. I have plenty in my home.” Jackpot. Toure looks at the picture and says he’d pick the romper on the right because the blue “is quite a strong piece.” 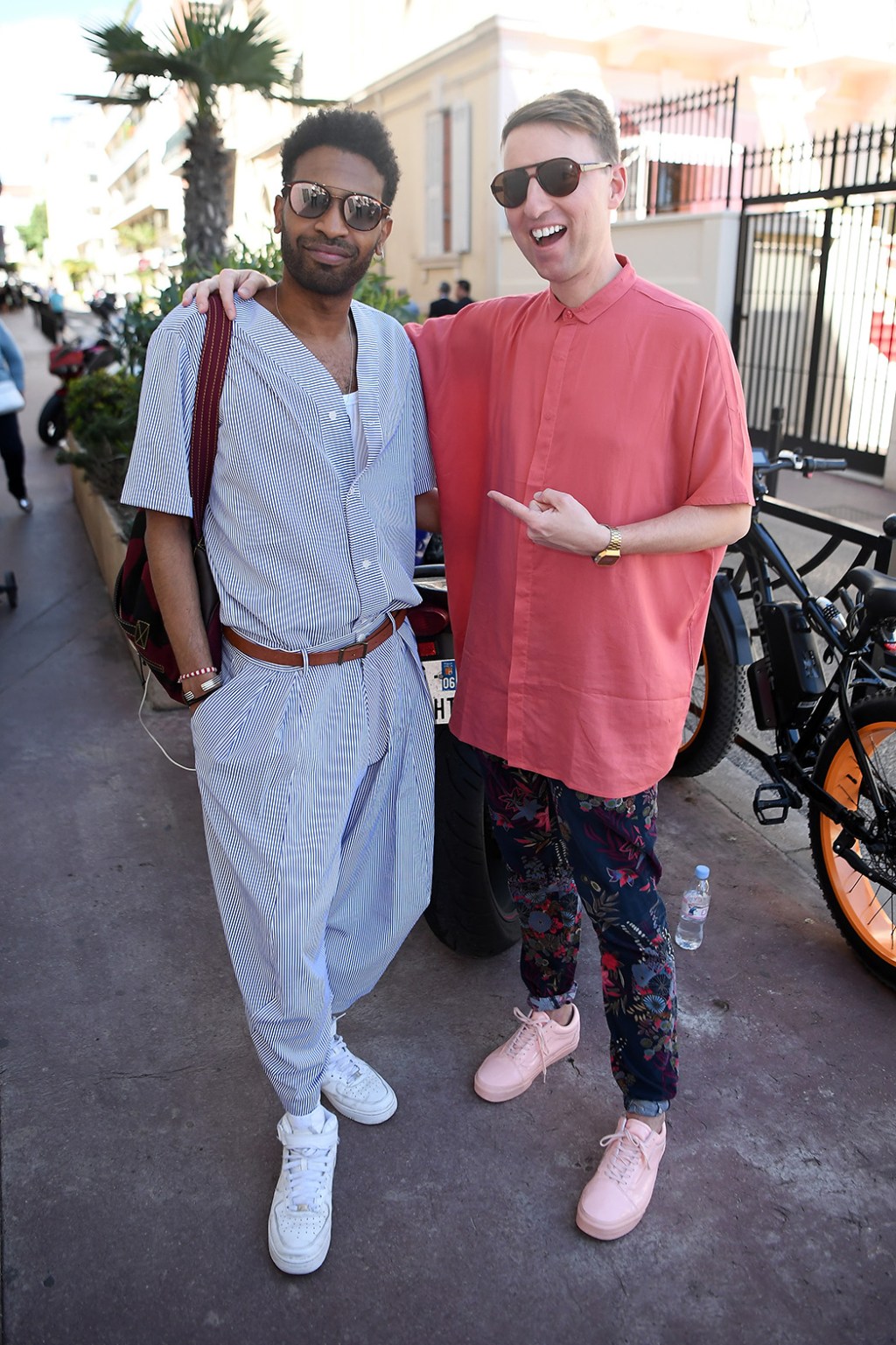 He explains the appeal of the one-piece. “You feel naked and dressed at the same time, that’s why it’s so funny. You can wear it to the beach or you can wear it for more classy events. I have this Agnes B. one that I wear for big occasions. It’s one of my favorite outfits,” he says.

He’s one of my favorite people now, even if it’s not a perfect fit. The only downer is that he doesn’t know where to buy one in Cannes. Sigh. Le sigh.

Neither does Michal, whom we spot near the beach, speed walking with her fiancé. She’s wearing an army green romper and though she’s not a man, we’re so desperate for romper attention that I interview her.

“It’s a one-piece and it fits everything. It’s comfortable, but the only thing is when you need to go to the bathroom, you have to take everything off. That’s the downside of that,” she laughs, something that isn’t a problem for the male variety, which comes with a zipper. “It’s almost like wearing your jammies.” 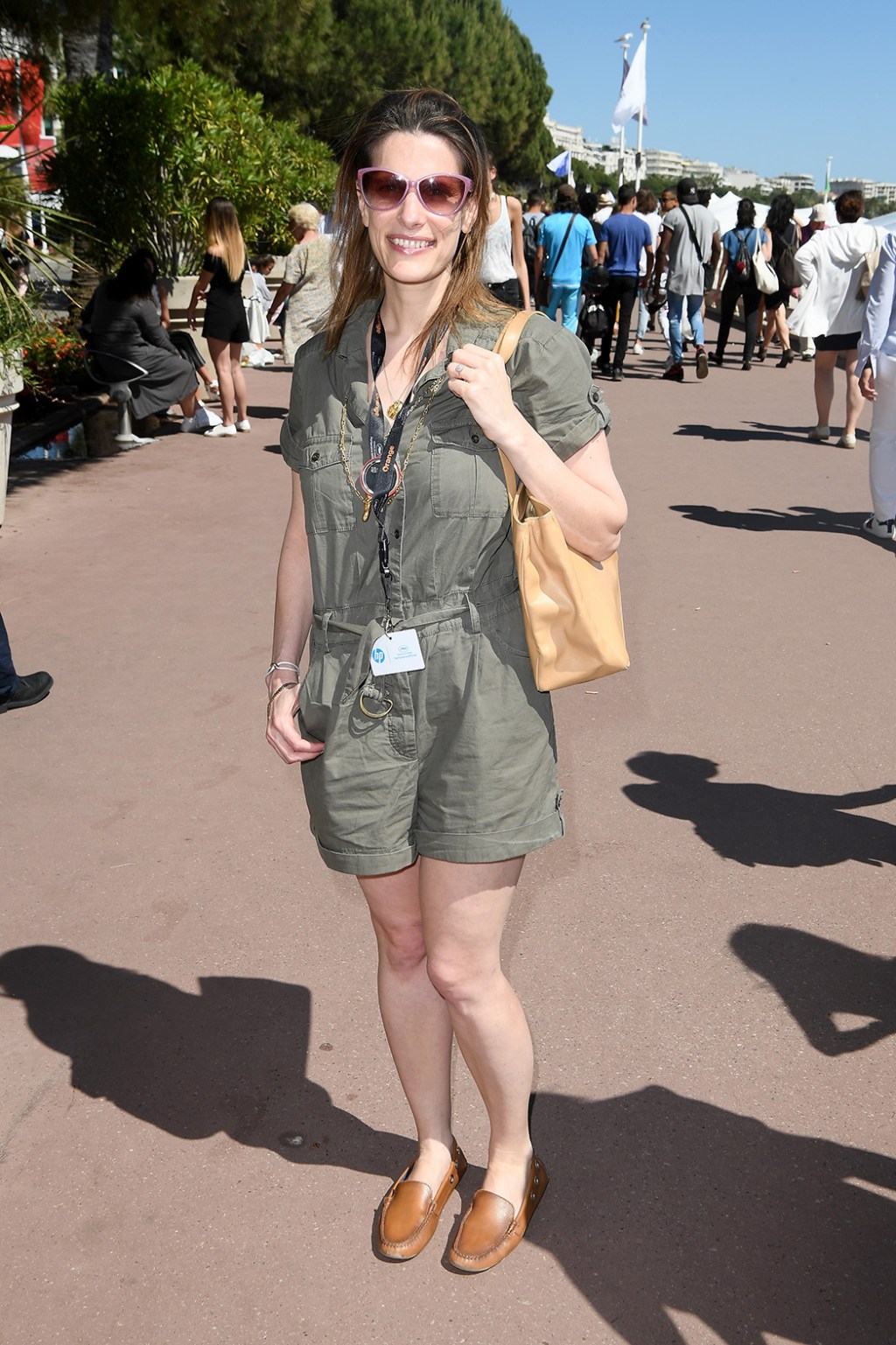 How would she feel about her fiancé wearing one? “It depends on where we need to go,” she answers. “If we were hanging out, having fun, I would be super happy about it, but if we actually need to go to someplace to impress people, I’m not sure about it.”

I look at my watch. Our 90 minutes is almost up. I stop in Dior, Dolce and Zegna and avoid any Pretty Woman “I don’t think we have anything for you” moments by scanning the racks on my own. Nada. Around the corner from the Croisette is a store called StyleJunky. Emmanuel is the boss and he says he doesn’t think the rompers have made it to Cannes quite yet.

My pal Emmanuel at #Stylejunky. #Cannes2017

“The blue one is very cool and the guy is beautiful, so yeah, I like it,” he tells me. “It’s not so easy to pull off. It’s easier for woman or girls, but for men it’s more difficult.”

So is trying to find a romper in Cannes. I call it quits and head back to the office where my rad colleague Tristan immediately tells me that he just spotted a man wearing one around the corner. Too late now, though, because the red carpet is calling. I know a woman who could pull it off and her name is Rihanna. But a man? Hmm …