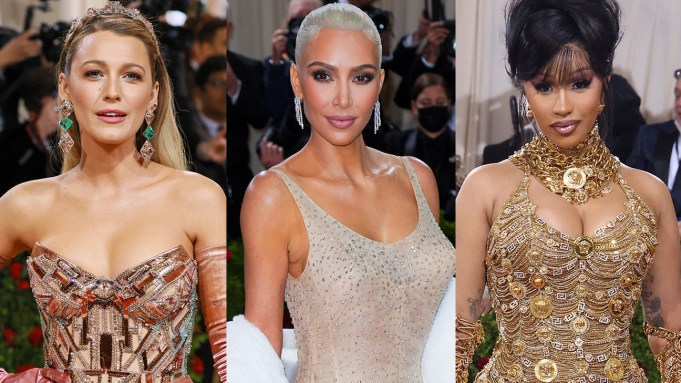 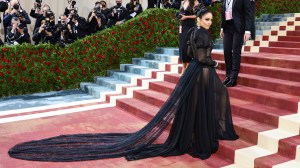 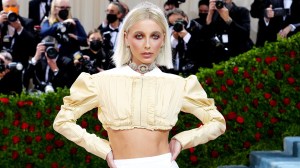 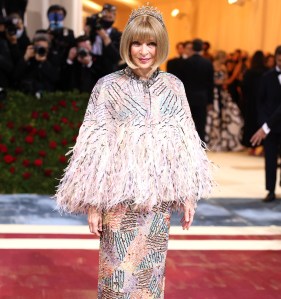 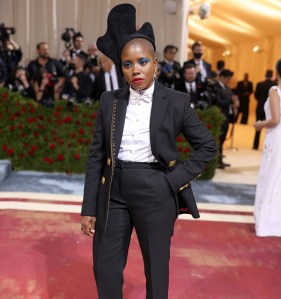 On May 2, stars eschewed the outrageous costumes of past Met Galas and instead ran the gamut from quiet elegance to full-on drama on the steps of New York’s Metropolitan Museum of Art.

The night’s “Gilded Glamour and White Tie” dress code was interpreted in myriad ways by attendees who ranged from co-host Blake Lively to Cardi B., Maude Apatow, The Gilded Age’s Louisa Jacobson — and the woman who caused the gala’s biggest fashion and social media frenzy in what was the night’s final red carpet moment: Kim Kardashian, wearing that Marilyn Monroe dress and accompanied by boyfriend Pete Davidson.

With this fundraiser for the museum’s Costume Institute positioned around its latest exhibition, “In America: An Anthology of Fashion,” many guests opted for looks that honored an Americana theme; others paid tribute to New York City, while still others channeled the notion of “gilded glamour” in a literal sense. Perhaps most importantly, exceedingly few attendees turned up in the over-the-top costumes that have made headlines at previous events, instead choosing looks that exuded drama while never stepping outside a fashion ideal.

Here’s a selection of high-wattage women who stood out on Monday night’s red, white and blue carpet.

It was the night’s final arrival and the one that has garnered the lion’s share of headlines: Kim Kardashian wore the vintage Jean Louis gown designed for Marilyn Monroe, which the icon famously wore to Madison Square Garden in 1962 to sing “Happy Birthday” to John F. Kennedy. Working with both Julien’s Auctions and Ripley’s Believe It or Not, the current owners of the dress, Kardashian wore the original sheer illusion dress, embellished with more than 6,000 crystals, only for the walk up the museum steps with Pete Davidson, changing into a replica dress the moment she was inside the doors. On Instagram, Kardashian noted that she was “honored” to wear the historic design, thanking Ripley’s and adding, “I am forever grateful for this moment.”

The Everything Everywhere All at Once star was a hit on the red carpet in a mint green gown of upcycled silk faille by Atelier Prabal Gurung, paired with a Richard Mille watch and jewelry that included the stunning Forest Valley necklace, also designed by Gurung for Tasaki, crafted of Akoya and South Sea pearls, diamonds, aquamarines, sapphires and tourmalines set in platinum. “For us, she is everything we’ve looked up to and always inspires us,” Gurung said of Yeoh on the red carpet.

The Met Gala co-host was already drawing raves for her Atelier Versace gown before she revealed the backstory on the red carpet. At the base of the steps, an oversized bow in copper-hued satin was unfurled to reveal a train in verdigris, embroidered and beaded to resemble the celestial map and zodiac constellations depicted on the ceiling of New York’s Grand Central Terminal; her Art Deco beading, meanwhile, was meant to evoke thoughts of the Empire State Building. As for the look’s bronze-to-verdigris color change, when combined with Lively’s Lorraine Schwartz crown and earrings, the result was a tribute to Lady Liberty, she said. “It’s my homage to icons of New York,” Lively explained on the red carpet.

The actress called her custom Ralph Lauren halter dress “gilded glamour for the future.” The design started with a hood and bib fully embellished in crystal stripes and black sequins and descended to a fluted mermaid skirt embroidered and beaded with more than 36,000 jet black rhinestones. Monáe finished the look with the Domino Dots ring, crafted of black and white diamonds set in 18-karat white gold, by Delfina Delettrez.

Cardi B. in Atelier Versace

Twitter lit up like a house on fire when Cardi B. arrived in her gold metal Atelier Versace gown. Few looks reflected “gilded glamour” quite like Cardi’s gown, which also was among the night’s most complex designs. Gold metal chains, featuring Versace’s signature Medusa and Greca symbols and totaling roughly one mile in length, were embroidered onto the sheer tulle dress, which required 1,300 hours to complete. Fingerless gloves were crafted in the same manner, while a hand-sculpted chain collar is meant to evoke images of a Victorian coat ruff. On Instagram, the rapper and songwriter deemed herself a “Versace trophy.”

The corset detail of Thompson’s frothy pink gown, a custom look by Wes Gordon for Carolina Herrera, honored the night’s Gilded Age theme, but the abundance of hand-pleated tulle in the tiered skirt was pure fantasy. Thompson paired the high-low dress with pearl and gold jewelry by Lady Grey and Delfina Delettrez.

For her first Met Gala, Glenn Close wore head-to-toe Valentino, a custom look by creative director Pierpaolo Piccioli, who also accompanied the actress on the red carpet. The fuchsia ensemble included a voluminous embroidered cape, silk georgette shirt and pants, accessorized with a clutch and leather gloves in the same hue, easily among the night’s most popular colors. “I feel free; I don’t feel like I’m being contained by the clothes,” Close told THR on the red carpet. “I feel like Pierpaolo has helped me be who I am in an unusual situation, and I’m very grateful for that.”

Like Lively, Keys opted to honor New York architecture with her look, a custom design by Ralph Lauren that combined a strapless column gown embellished with 30,000 transparent crystals and black lacquer sequins, worn under a jeweled, embroidered cape of duchess satin, which detailed the New York skyline via the sparkle of more than 200,000 crystals. Keys paired the look with vintage emerald and diamond jewels set in platinum from the Tiffany & Co. archives.

The Gucci contingent arrived on the red carpet together, with Dakota Johnson positioned between creative director Alessandro Michele and actor Jared Leto, who were twinning in perfectly matching floral-embroidered suits in ivory silk. Between that pairing, the actress nonetheless stood out in a black sheer-lace bodysuit embellished all over with metal beaded fringe, worn with a velvet draped robe accented with crystal fringe. Earrings and a ring in diamond fringe from the Messika high-jewelry collaboration with Kate Moss completed the look.

Castmembers from HBO’s The Gilded Age acquitted themselves well on the Met Gala red carpet, from Christine Baranski in Thom Browne to Jacobson, who wore a long-sleeve dress from Daniel Roseberry’s Spring/Summer 2022 haute couture collection for Schiaparelli. Crafted of hand-pleated silk tulle with a flounce of black tulle at the waist and hem, the dress also featured feathers in hand-painted gold leaf and trompe l’oeil skeletons in molded leather, finished with 24-karat gold. David Webb’s Corkscrew Curl earrings in 18-karat gold completed the look.

Lanvin was a label that lost its mojo once it parted ways with creative director Alber Elbaz in 2015 (the beloved designer died of COVID-19 in April 2021). But lately Lanvin is recovering some of its star power via its current creative director, Bruno Sialelli, and nowhere was that more evident than the pale yellow gown seen on Claire Danes Monday night. Crafted of silk and Chantilly lace, including a lush ruffled hem, the bias-cut sleeveless gown moved beautifully on the red carpet. (The history of the house also dovetailed nicely with the night’s theme: Jeanne Lanvin founded her house in 1889, squarely in the middle of the Gilded Age.) A caged veil in black and white diamonds finished Danes’ look.

Louis Vuitton’s strategy for its Met Gala guests was rooted in sustainability, with the house’s 14 guests wearing either archival or previously worn looks. Stone opted for the dress she wore to the afterparty of her 2020 wedding, crafted in white silk and richly embellished with feathers around the hem. Silver Louis Vuitton pumps and pieces from Louis Vuitton’s high-jewelry collection completed the look.

Another of the night’s golden girls was The Marvelous Mrs. Maisel star, who wore a custom gown by Joseph Altuzarra, crafted of more than 25,000 gold metal paillettes in various sizes, from tiny sequins along the straps to pieces that looked larger than the palm of a hand around the hem and train of the fishtail skirt. Completely crafted in New York, the gown weighed roughly 70 pounds, the house noted. Brosnahan accessorized the look with gold rings by Los Angeles-based designer Grace Lee.

In head-to-toe Gucci, Turner-Smith evoked thoughts of Josephine Baker more than the Gilded Age, but the look worked for its unabashed glamour. The crystal strass chain bra and fringed miniskirt was accented with a pleated-chiffon open skirt in almond pink, while an assortment of Gucci high jewelry completed the look. “The inspiration was Busby Berkeley musicals, and I love it,” Turner-Smith said on the red carpet.

The Euphoria co-star exuded old-Hollywood glamour in her custom Miu Miu gown, crafted of black velvet and Chantilly lace embellished with black crystals and fringe embroidery. Apatow’s Cartier jewelry included a vintage 1939 brooch in her hair and a high-jewelry necklace of diamonds set in platinum.

A few attendees opted for the futurism of Dutch fashion designer Iris van Herpen, including Dove Cameron, Winnie Harlow and Swedish street-style star Fredrik Robertsson, but Teyana Taylor nicely blended van Herpen’s artistry with a nod to the night’s theme. Her tie-dyed silk gown in beautiful shades of violet virtually floated up the museum steps, but the showstopper of her look was the jewel-accented gold headpiece, crafted to resemble leaves and vines seductively wrapped around Taylor’s face, by Bali-based House of Malakai. The actress pronounced the look “Gilded Galaxy” on Instagram.