The first rule of collecting celebrity memorabilia? Make sure it’s been touched by the star whose name is attached. Proving it as part of the item’s provenance is key to owning a collectible with a great story; if you can’t, then what you own could merely be considered a pricey knickknack, not a piece of Hollywood history.

Brigitte Kruse understands this idea all too well. As owner and lead auctioneer of the Palm Desert, Calif.-based GWS Auctions, she takes it in stride when asked if something like a celebrity’s prescription bottle possesses any interest or value. “Believe it or not, there’s a ton of interest in those,” Kruse says. “People like those types of items because they know for sure that a famous person has come in contact with them.”

Stylist Roundtable: 5 Top Image Gurus on the "Battle of the Black Dress" and Losing Money During Awards Season

You’ll find a handful of prescription bottles — from Carrie Fisher, Jerry Seinfeld, Frank Sinatra, Marlon Brando and others — in the “Hollywood Legends and Music” auction, set for Saturday at 10 a.m. at the Andrew Weiss Gallery, 14620 Keswick Street in Van Nuys (online bids are already being accepted). Kruse says she’s been planning the 175-item event for more than nine months, curating a collection that offers something for everyone in both interest and price. “We are a smaller boutique auction house, and we like to price things so everybody can play,” she explains. As of Wednesday afternoon, prescription bottles from both Sinatra and Fisher carried current bids of $70, while at the other end of the spectrum, a stage-worn left-handed crystal glove from Michael Jackson’s 1997 History Tour had reached $5,750.

Indeed, amid a selection of under-the-radar items from Hollywood’s past and recent present — from a 1981 Mercedes-Benz 380 SL used to transport Jane Wyman while she filmed the nighttime soap Falcon’s Crest to a Bob Mackie jersey wrap dress worn by Amy Adams in 2013’s American Hustle — you’ll find a healthy selection of lots once owned by Jackson, as well as Elvis Presley and Marilyn Monroe, and that’s by design, Kruse says. “Part of the reason that I specialize in Elvis, Michael and Marilyn is that they’re just the leaders of the pack in auction items, no question,” she notes. “Each one of them is an icon who met with an untimely death. The public will always be fascinated by them.” 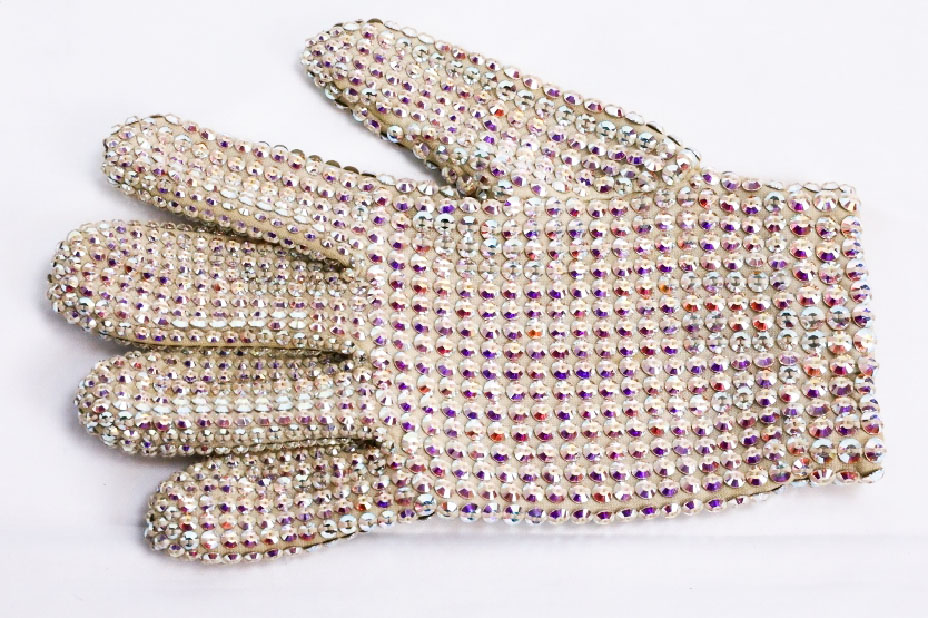 A pair of sunglasses owned by Monroe had reached a current bid of $2,100 by Wednesday, though another lot not yet garnering any bids seems far more intriguing. A three-piece brush, comb and hand mirror set once owned by Allan Snyder, best known as the actress’ personal makeup artist, has been left largely untouched since it was last used. Among its details? Monroe’s blonde hairs, still found in the brush. “The fact that the set had never been offered before was mind-boggling,” Kruse says. “A gentleman in the celebrity memorabilia community had this in his personal collection. He got it from a makeup [artist] and hairdresser who was an apprentice of Allan Snyder. I was begging him for something special, and he brought this out. I was absolutely floored.”

In addition to one of Jackson’s iconic crystal gloves, fedoras he wore during performances of “Smooth Criminal” and an autographed pair of the black leather Florsheim loafers he wore while performing his legendary Moonwalk are also up for sale. Meanwhile, a ride-on electric train, complete with cars and tracks, came from Jackson’s Neverland Ranch; he purchased the one-of-a-kind set, which carries a current bid of $2,600, for Prince Michael, Paris and Blanket (now Bigi) Jackson. 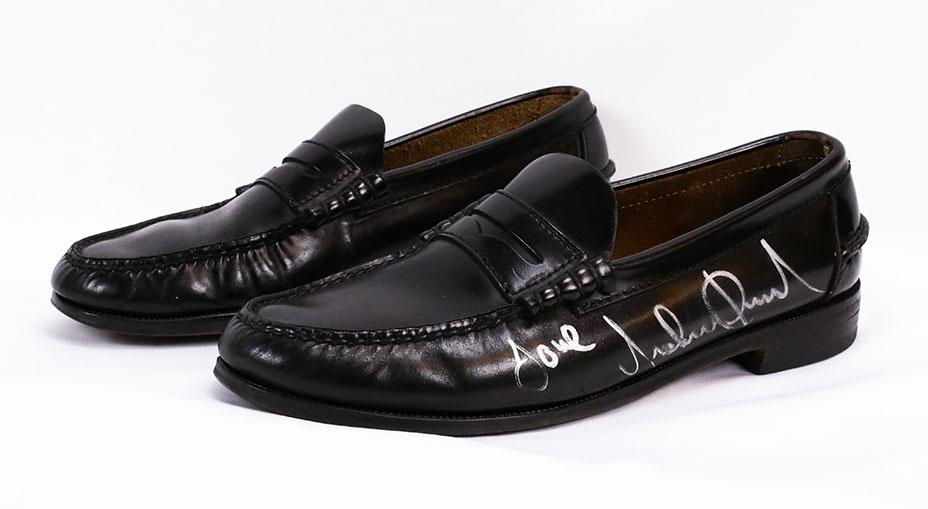 Items once owned by Presley are equally varied, from a notebook he used during his years in the Army to a pair of sunglasses often seen on the King, featuring “EP” on the bridge and gradient purple lenses. “These are a custom-made item that have never been seen at auction,” Kruse points out. “There are a lot of replicas out there, but these are the real deal. They have his prescription lenses in them, and portions of them are solid 14-karat gold. They’re incredibly special.” The sunglasses are offered at a starting bid of $5,000. 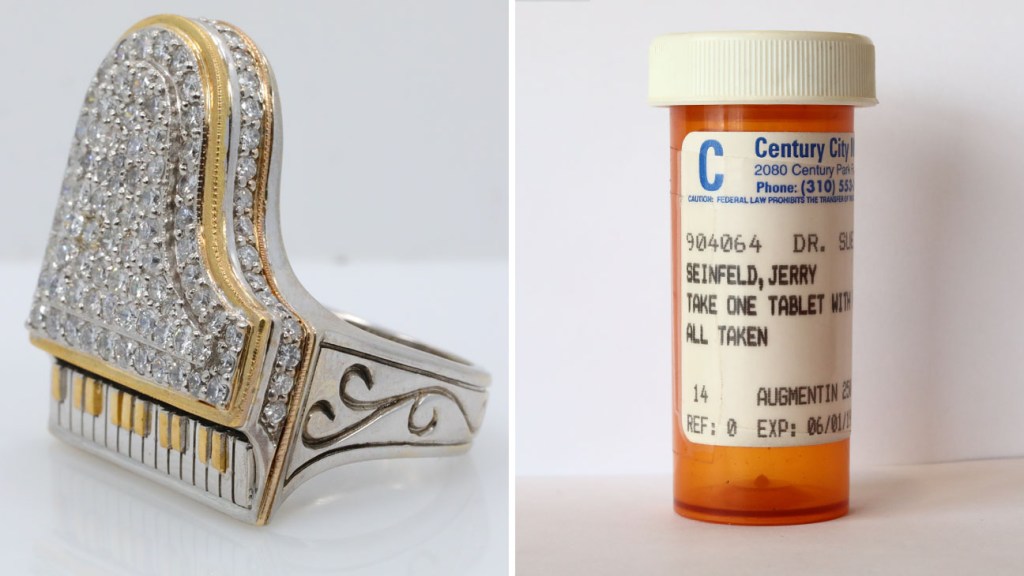 Elizabeth Taylor, Sammy Davis Jr., Elton John, Liberace and Anna Nicole Smith are also among the celebrities highlighted via auction items once owned or worn — or driven, as the event features a selection of cars, as well as a boat and a bumper car, the latter two both once owned by Presley (he christened his 18-foot Chris-Craft the “Hound Dog”).

Then there are the items that boast an undeniable kitsch. If you’re a fan of The Brady Bunch, perhaps you’d like to own a plaid dress worn by Eve Plumb as middle sister Jan Brady? The starting bid is $200. “I wanted a few items in the auction that felt a little out of left field,” Kruse says. “Who didn’t love The Brady Bunch? And most of the wardrobe from that series is lost, because that was during the period when costumes no longer needed were either thrown out or donated to thrift shops. They didn’t know that anybody cared.”

“Hollywood Legends and Music” is the latest in a recent spate of memorabilia auctions that seems to have picked up in both frequency and interest over the past two years. As the saying goes, if someone is selling then someone is buying, and Kruse doesn’t see collector enthusiasm dissipating anytime soon. “We’ve definitely seen a huge spike in interest,” she says. “There are really passionate collectors out there, but they’re not the only ones who are buying. I know stockbrokers who do this on the side. With the right item, it’s a better investment than Wall Street.” 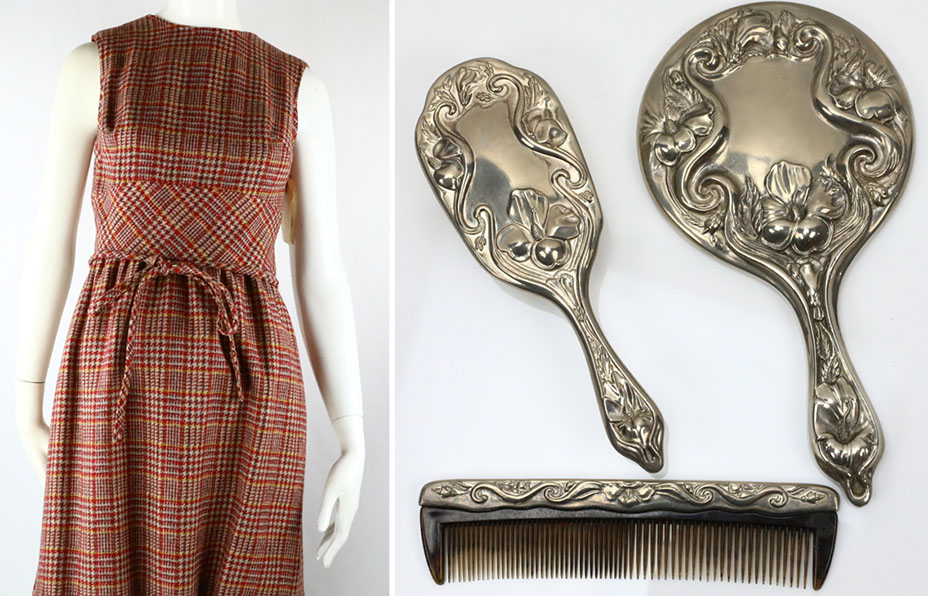