If there is anyone who should be laying claim to the 1980s trend that is sweeping the runways this season, it’s Donatella Versace. After all, her brother Gianni was one of the chief architects of the powerfully sexy look that defined the decade and still rings true for many women today (just ask Jennifer Lawrence). He is also the subject of Ryan Murphy’s latest miniseries, Versace: American Crime Story, which seems to have been less of a blight on the family than the company thought when it issued not one, but two statements deriding it.

The brand took the latest social media storm starring JLaw as a gift, acknowledging it with a tweet Friday that said, “When your dress is so glam that you can’t wear a coat over it in the middle of winter.” Isn’t that just the essence of Versace? Since when does fashion have to be practical? Well, more on that later.

When your dress is so glam that you can’t wear a coat over it in the middle of winter. #JenniferLawrence pic.twitter.com/43aACGi75l

There were several sexy dress options for JLaw in the fall 2018 Versace collection, shown by special dispensation at Milan’s royal palace Friday night, including a few shimmying fringe. But mostly, this was a collection that seemed designed to connect with a younger, streetwear and logo-loving customer, part of a fashion sea change we’ve seen on other Milan runways this week, namely Prada and Fendi.

With a show set in a royal palace, it was only natural that queen Donatella would nod to Britishness and punk with patchwork tartan blazers and kilts, stretchy bustier tops worn over the season’s obligatory logo T-shirts and leather miniskirts, all accessorized with berets covered in cute badges, “Versace” knit footballer scarves and chunky gold coin jewelry. (Side question, if you are old enough to remember dressing that way the first time around, is it OK to go for round two? Asking for a friend.)

The famed Versace baroque prints came out to play with the tartans on colorful patchworked ball and bubble skirts, parkas, catsuits and jersey dresses that leave no question what fashion clan you belong to. And although there were some glamazon heels like Donatella herself wears, there was also a Versace take on the nerd-comfy dad sneaker. I only have to wonder if Gianni would approve? 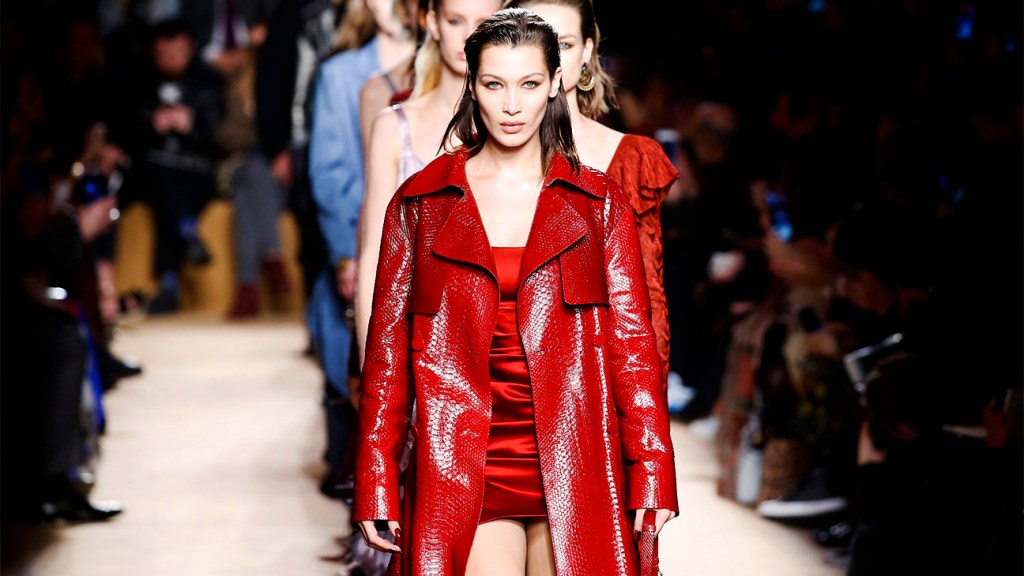 Roberto Cavalli is another brand working on shedding its outdated, in its case, molto cheesy image, for something more modern. This is the second season with new designer Paul Surridge at the helm, and his more minimal and contemporary vision is starting to set in. From the brand past, he kept a bit of the animal instinct, but it wasn’t the safari’s worth we saw back in the day. Instead, he showed touches of it, for example, the luxe cherry red crocodile trench coat worn by millennial queen Gigi Hadid, a super-sexy clinging knit gown patterned to look like feathers, and a streetwear-inspired fur backpack with mink tail. 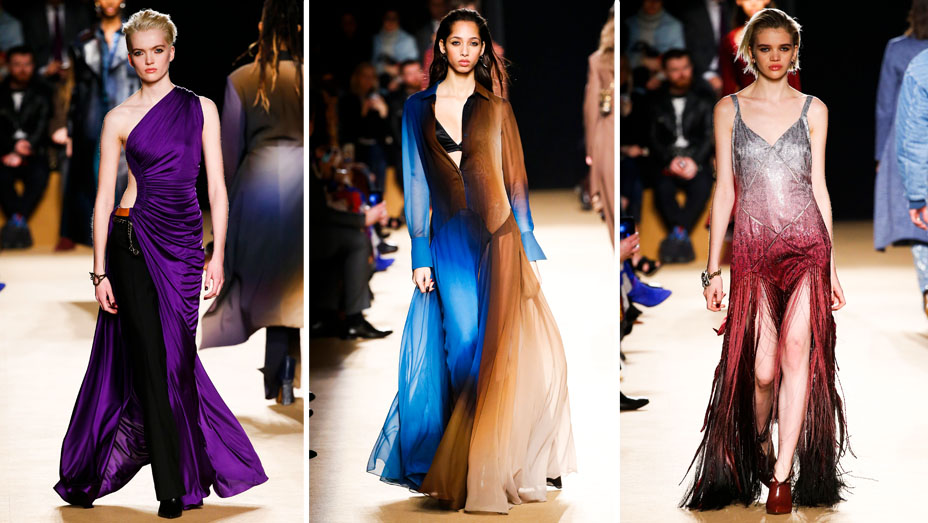 What I liked best of all, though, was the moody look of the dip-dyed blazers, coats and flared pants, sliced up the sides to reveal hints of skin. I could see a young star like Zoe Kravitz rocking that. The ombre effect also appeared on scarfy dresses, and there were a couple of fringed gowns with sexy cutouts that could put the brand back in the running as a Hollywood red carpet contender. The only time Surridge lost me was when he sent out a male model in crystal bedazzled jeans. Some things are better left behind. 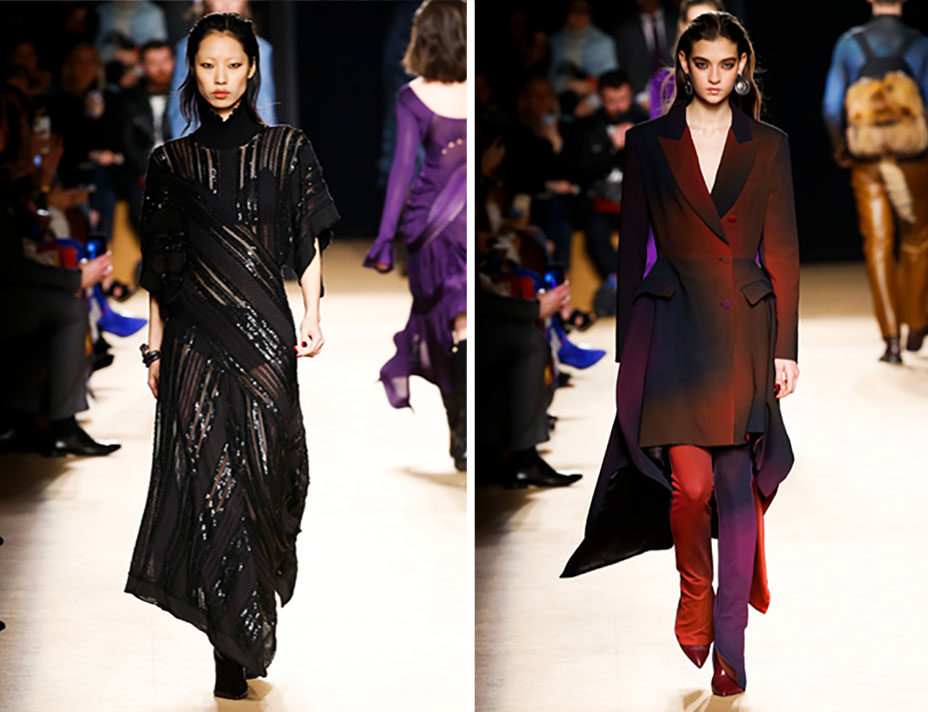 Etro, celebrating its 50th anniversary this year, is also reckoning with bringing past to present. Creative director Veronica Etro has taken the Italian aesthetic built on paisley textiles in a more global, boho direction, and this season was no different.

Backstage at @etro where designer Veronica Etro is sharing inspiration behind her “cosmic prairie” collection up next. #mfw

For a post-modern craft look she called “new cosmic prairie,” she took inspiration from all over the place — desert landscapes, Navajo weaving, the Ballet Russe, the Memphis design movement, ethno-futurism and more, showcasing handmade zig-zag, checkerboard, star and arrow prints that were so complex, her design team engineered print placement on the paper dolls on display backstage next to her mood board. 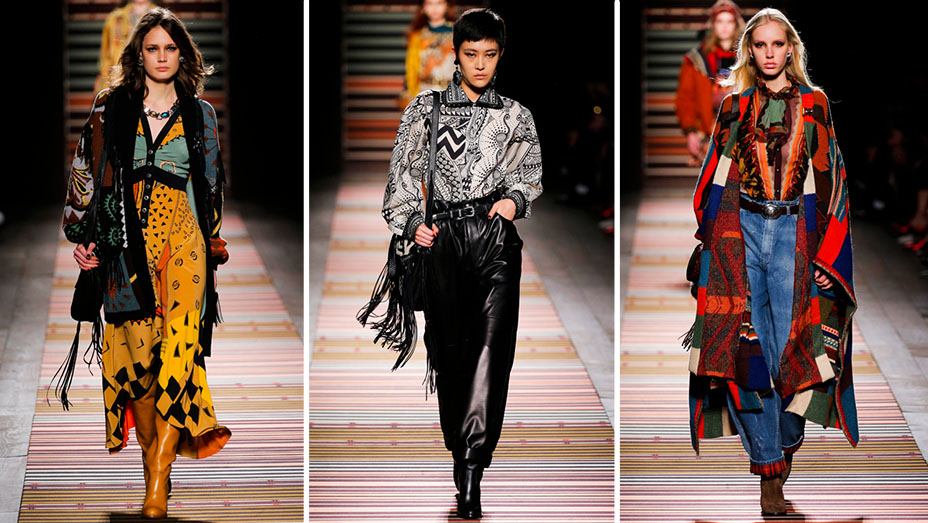 On the runway, there was plenty for old and new brand fans to love, including graphic patchwork peasant dresses with built-in scarves, wide-legged trousers with turn-up cuffs, Western-style shirting, fringed blanket coats, ponchos and more, that while not totally new (comparisons to Valentino, Ralph Lauren and even Zandra Rhodes came to mind) were gorgeous nonetheless.

Since the designer herself was dressed in a fringed, Native American-looking cardigan coat and bird fetish necklaces, I asked her if she’d been globetrotting to the American Southwest, or even Coachella, where Etro’s luxe boho looks have been popular with such stylish stars as Florence Welch and Kate Bosworth. “I wish … only in my books, my mind and my dreams,” she said. Time to take a trip, Veronica. 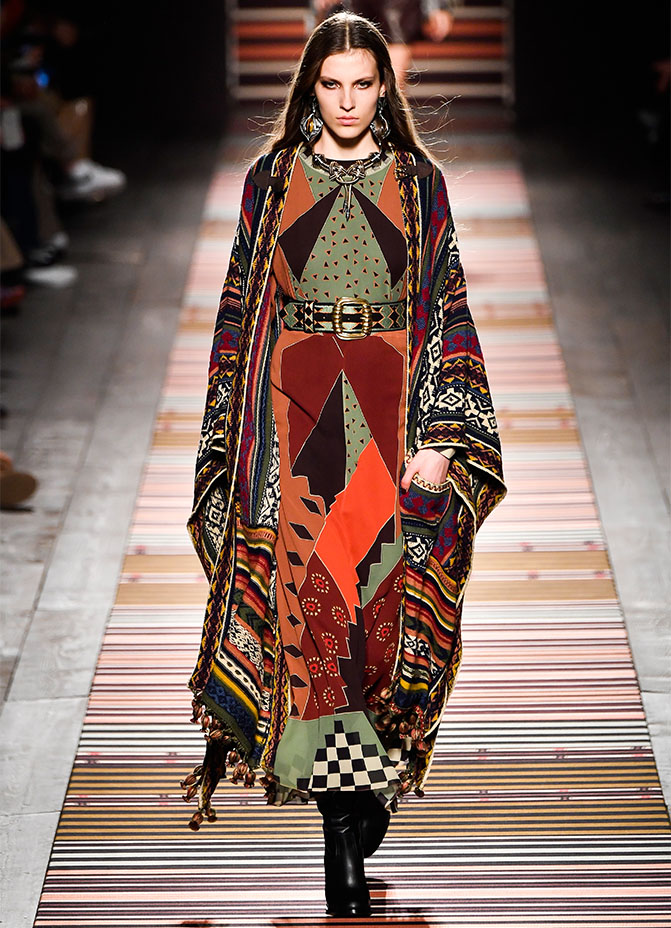