Hollywood is never far from mind at the House of Ferragamo; it’s famously where Salvatore built his reputation as “shoemaker to the stars,” crafting footwear for Gloria Swanson and Joan Crawford in the 1920s before returning to his native Italy to found his eponymous label.

It’s no surprise, then, that the Hollywood mystique was out in force at Ferragamo’s Spring 2019 presentation on Saturday morning in Milan, from the front row — which included Julianne Moore and husband Bart Freundlich, Armie Hammer and wife Elizabeth Chambers, and Ellie Bamber — to backstage, where a 1940s image of Loretta Young, wearing trousers and a pair of Salvatore’s heels, was prominently positioned on the collection’s mood board. “That image really triggered a whole thought process this season,” said Paul Andrew, the sought-after shoe designer who was named creative director for Ferragamo’s women’s wear and accessories in 2017. “And it wasn’t just the sculptural heel, but also the woven net upper, which found its way not only into shoes and bags but also elements of the ready-to-wear and other aspects of the collection.” 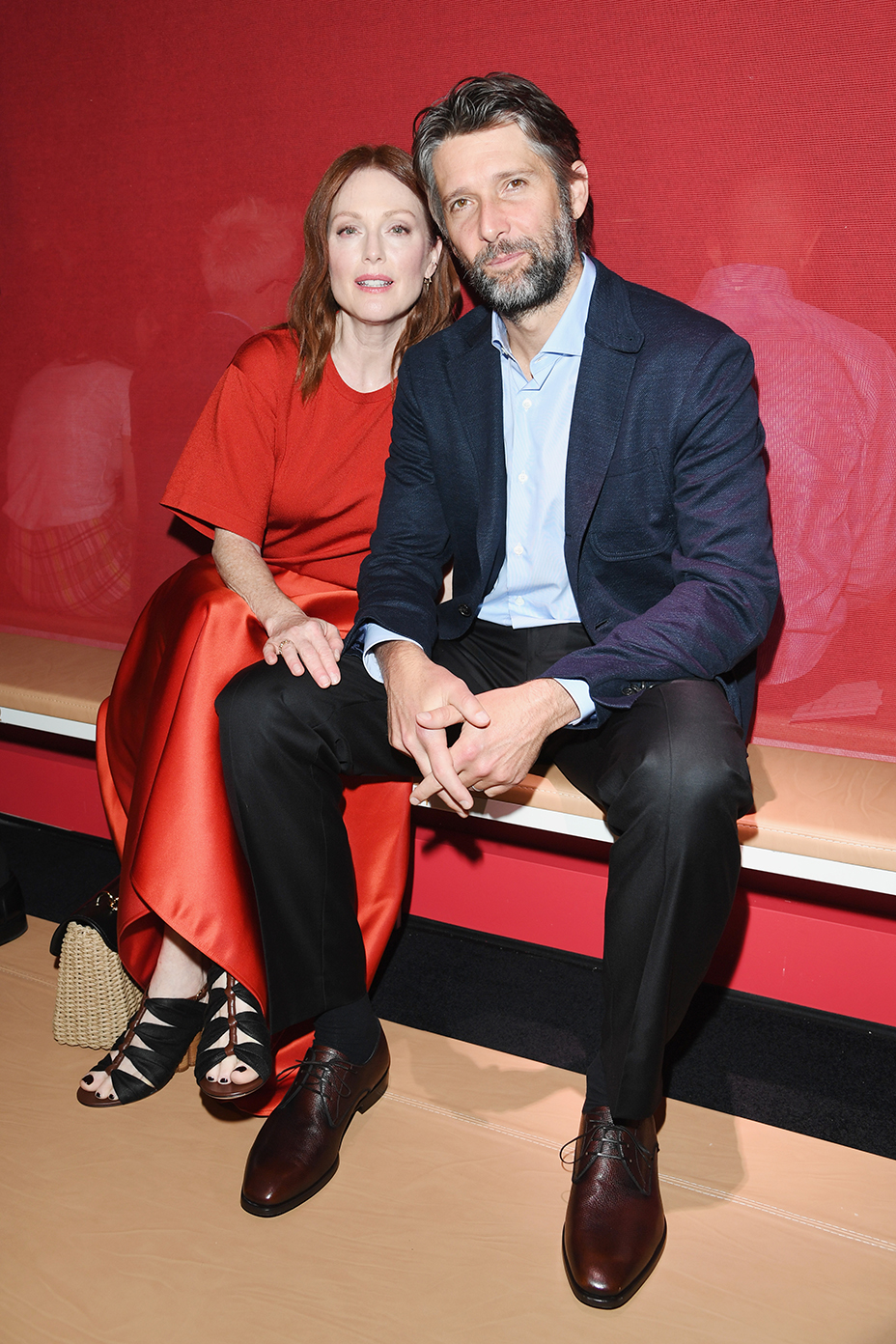 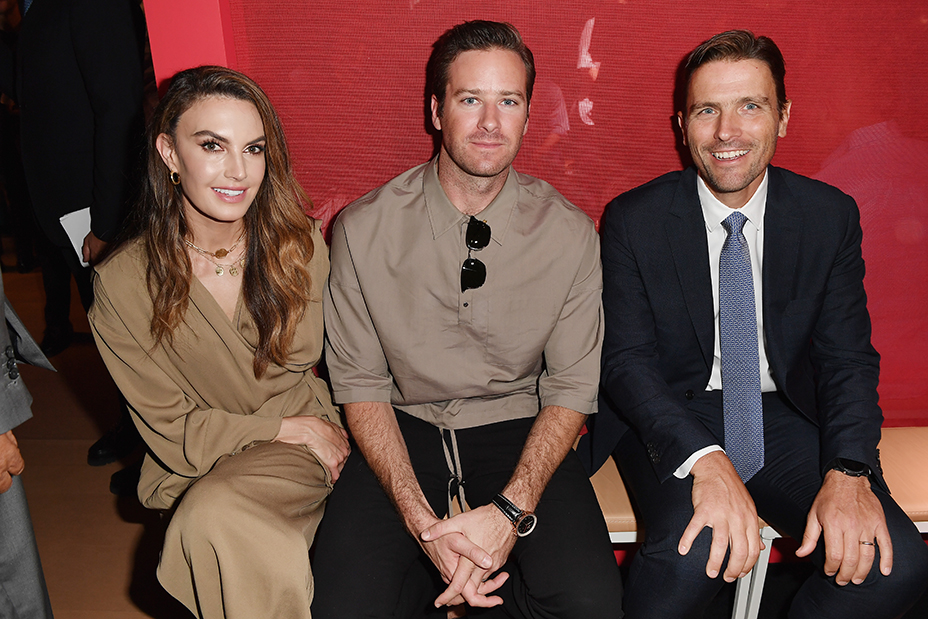 Like last season, Andrew’s women’s collection was shown in tandem with the men’s collection designed by Guillaume Meilland. “It’s really important for us that we build this new wardrobe with one singular aesthetic language — up until the point we had been working together, it had been speaking lots of different languages,” Andrew explained.

The cohesive look that resulted felt breezy and inspired by the classic codes of Ferragamo. Meilland pointed to utilitarian lines as an influence this season, and you could see that in the streamlined overalls on men (more polished than what you may be envisioning), worn under loose, fluid trench coats, also prominently featured on women. Khaki dominated this color palette — which offered a nice break from the neon hues that have earnestly marched through most women’s collections this season — and there were some nice punches of color in pieces like a violet mid-calf slip dress with a handkerchief hem, a satin trench in Caribbean blue and a pink satin menswear-inspired suit worn by Kaia Gerber. 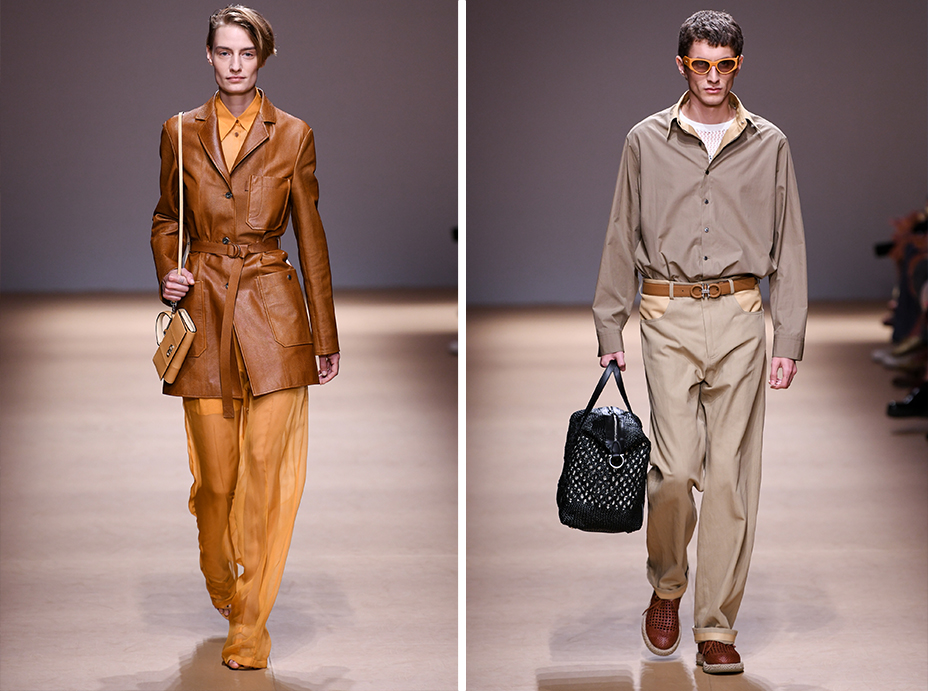 Meanwhile, with Andrew at the helm of the women’s collection, shoes and bags can’t help but feel elevated. That sculptured heel from the Loretta Young photo indeed inspired a slew of styles, from platform sandals with uppers in woven net or strappy satin to natural or black mules in leather or karung. Andrew also offered a sleek minibag as an alternative to a variety of oversized satchels in leather or Ferragamo’s iconic Gancio print. “People are traveling constantly these days in a way they didn’t before,” he reasoned when asked about the large carryalls. “But once you’re in your destination, you don’t want to be schlepping around an enormous bag, which is why we made a statement with a smaller bag as well.”

A foulard from the Ferragamo archives inspired the tropical print seen throughout the collection, but overall these clothes were dominated by tones and silhouettes that felt largely minimalist and streamlined, including some flyaway back panels in organza on dresses and tunics that solidified the breezy vibe while adding a sense of movement. The latter was certainly true of the final look in black chiffon on Carolyn Murphy, who — like Shalom Harlow at Versace the night before — closed the Ferragamo show with a supermodel moment that quickly created social-media buzz. 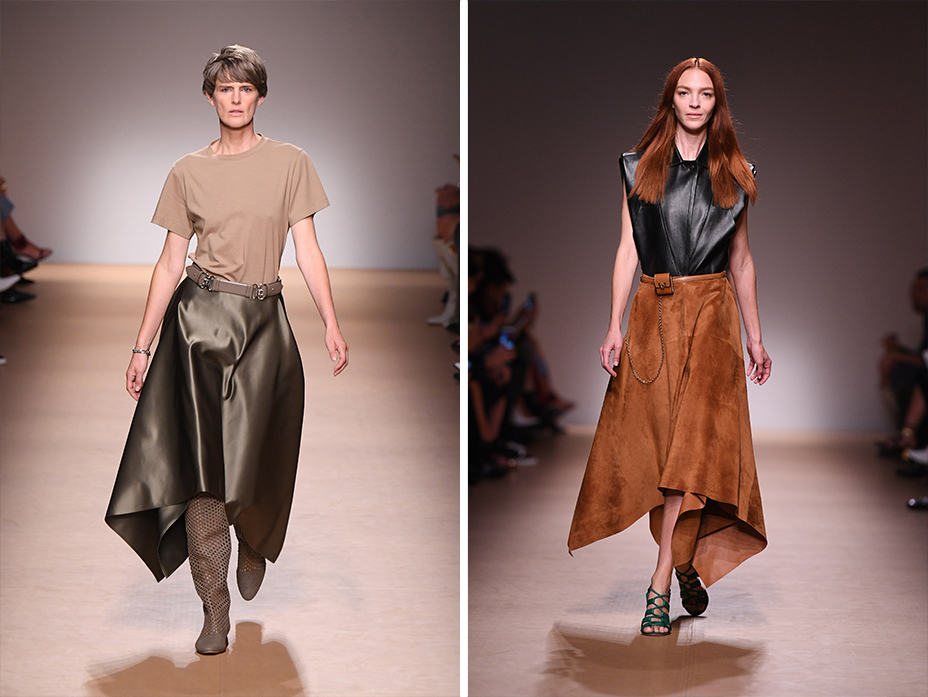 And the house’s relationship with Hollywood? That’s not waning anytime soon, especially if Andrew’s cinema preferences are any indication. “Julianne is the epitome of the Ferragamo woman I’m dressing,” he said of Moore’s presence on the front row. “She’s smart, she’s a woman who works, so she’s on the go all the time, and of course she’s stunningly gorgeous. Also, The Hours is my all-time favorite movie.”

Hammer, who with Chambers always ranks among the red carpet’s most stylish couples, is unabashed in his fandom. “We’ve known the Ferragamo family for many years, and I love their clothes — I wear them a lot when I’m supposed to and also in my private life,” he said before the show. “But the thing about Milan is that everybody walking the street looks like they just walked off a runway. Fashion seems so interwoven with the culture here.”

Chambers noted that she and Hammer will attend a few more shows this week, as well as Sunday night’s Green Carpet Fashion Awards, an event at Milan’s Teatro alla Scala that honors the best in sustainable fashion, but she agreed that the couple’s relationship with the label transcended their love of style. “James Ferragamo has been a great friend, and we also love that this is one of the few brands that’s still family-owned,” she said.

James, who is the son of company chairman Ferruccio Ferragamo and the grandson of Salvatore, smiled backstage when Chambers’ la famiglia remark was mentioned. “Ferragamo is a big Italian family,” he said. “Armie and Elizabeth, they’re amazing people and members of the family also. It’s not just Italy at this point. The family is worldwide.”