In the 1980s, when color was all the rage, Giorgio Armani created the softly structured, greige suit that became the power uniform for a generation of career women, from Sherry Lansing in the boardroom to Jodie Foster on the red carpet.

“How was a woman rising up the ranks of power going to be credible, in an environment that was still all-male, if she was dressed like a doll?” he explained in his 2015 autobiography. 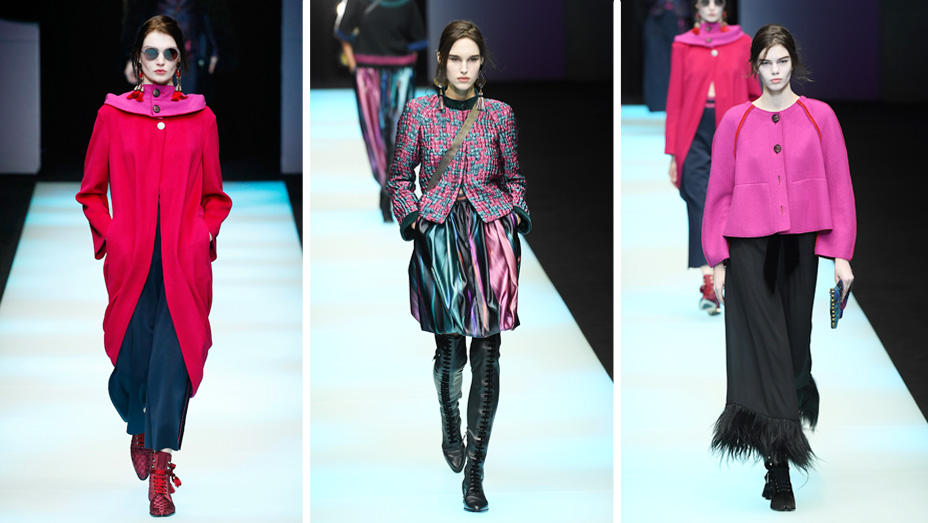 Fast forward to today, when his fall 2018 runway was pretty in pink, iridescent taffeta, even marabou feathers. Though clearly workplace gender dynamics haven’t fully evolved in the last 35-plus years, work attire has, and now women in most every office can wear what they want, Hollywood power players Patty Jenkins and Ava Duvernay among them.

Inside the Transformed Giorgio Armani L.A. Flagship Store on Rodeo 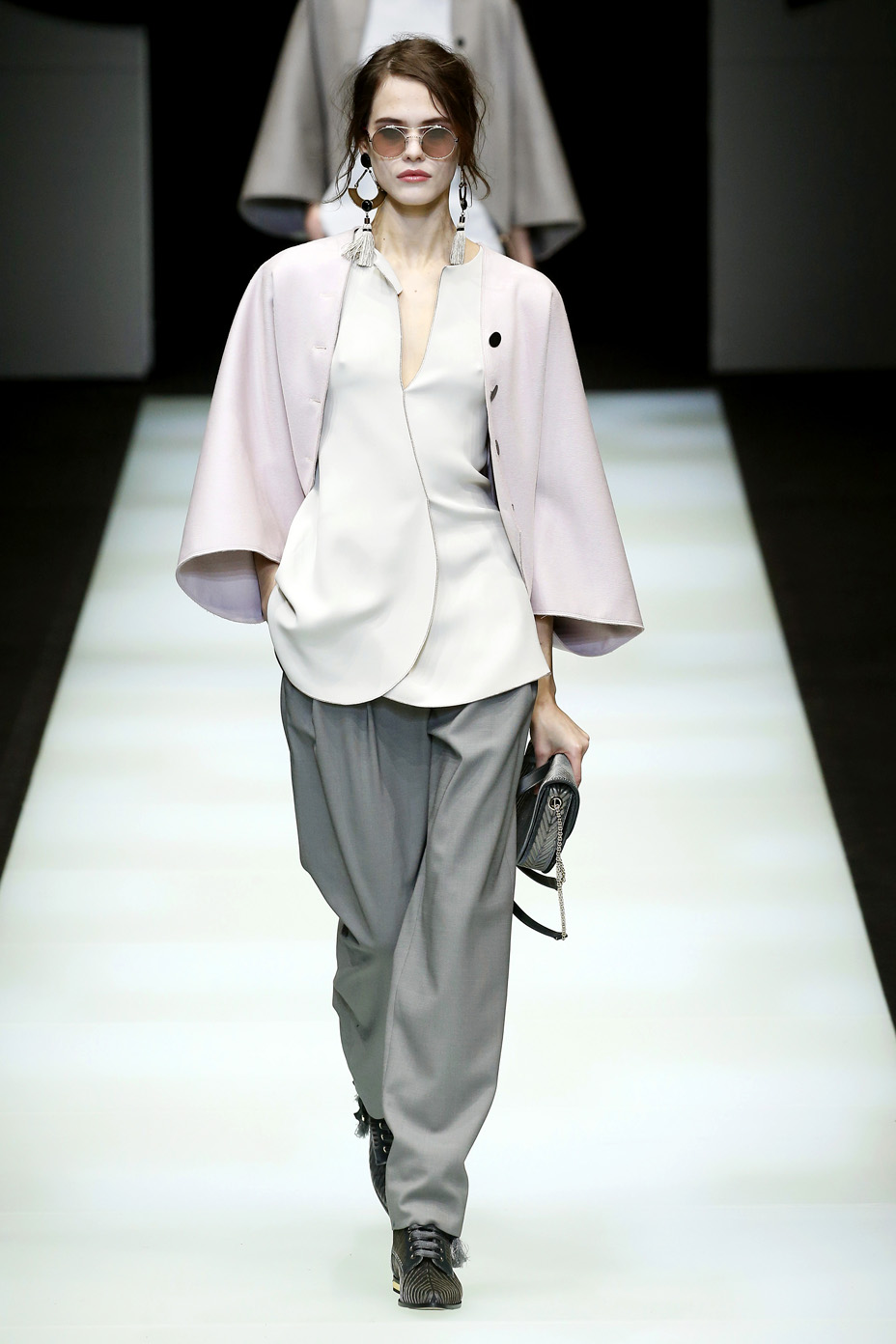 So Armani’s new power wardrobe consists of separates rather than suits — a cropped, curved pale pink jacket over a simple tunic and fluid gray pants; or for the extrovert, a hot pink cocoon coat over high-waist black trousers, worn with “look-at-me” tassel earrings. 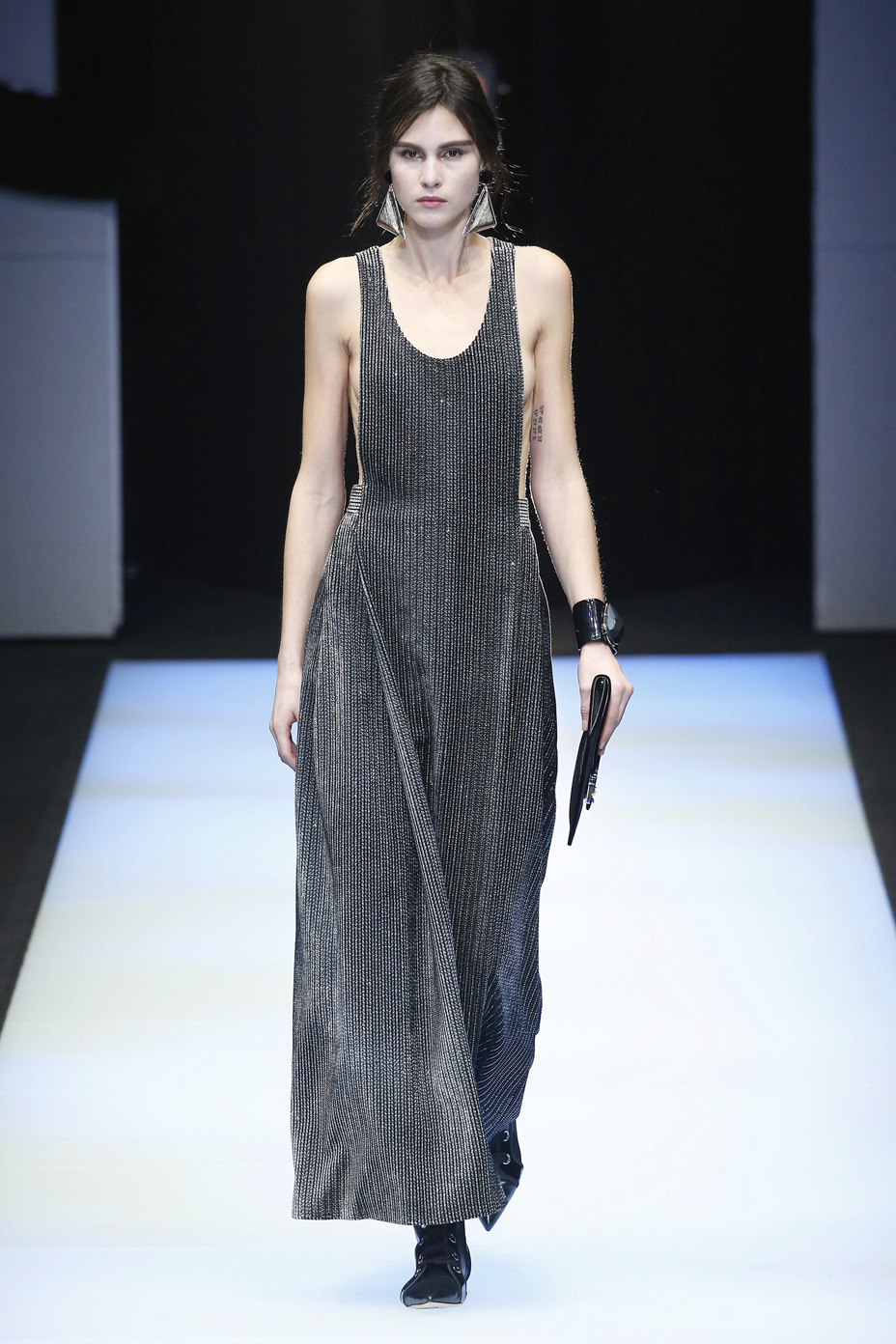 For night, an athletic-looking black beaded jumper dress could be just the thing for showing off some Michelle Obama muscle. Multicultural fringe, colorful jacquards and embroidery details added a harmonizing note — “an ode to coexistence as opposed to exclusion,” he wrote in his notes — and on the same day that an anti-immigration rally was held in front of the Duomo, in advance of Italy’s March 4 elections. 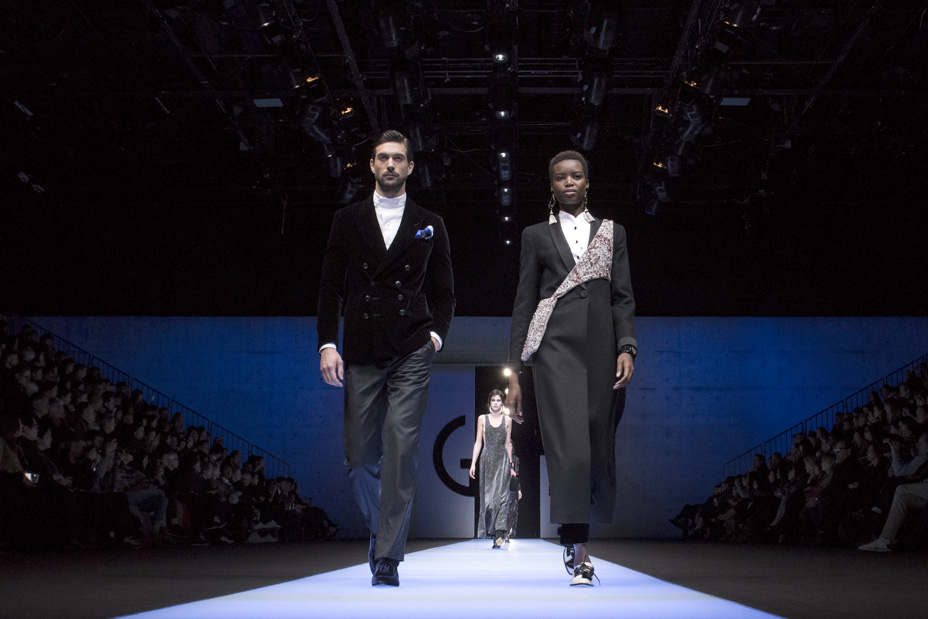 The designer also put gender politics front and center, sending out men and women side by side, a trend we’ve seen at nearly every runway show. But for a finale, the spotlight was on a single female model shining like a disco ball in a dazzling crystal-embroidered pantsuit, a reminder that this again is a time for women to shine. 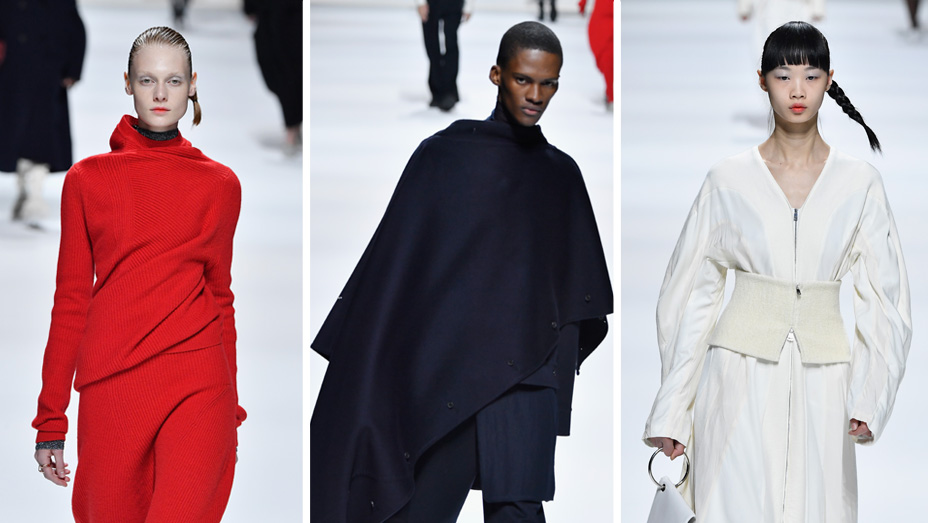 Jil Sander on the Rise

In their second season, Jil Sander’s husband-and-wife design team Lucie and Luke Meier reacted to the tumultuous times by serving up a collection that delivered protection, from soft floral coats that conjured cozy bedspreads to padded wraps carried under the arms like pillows. 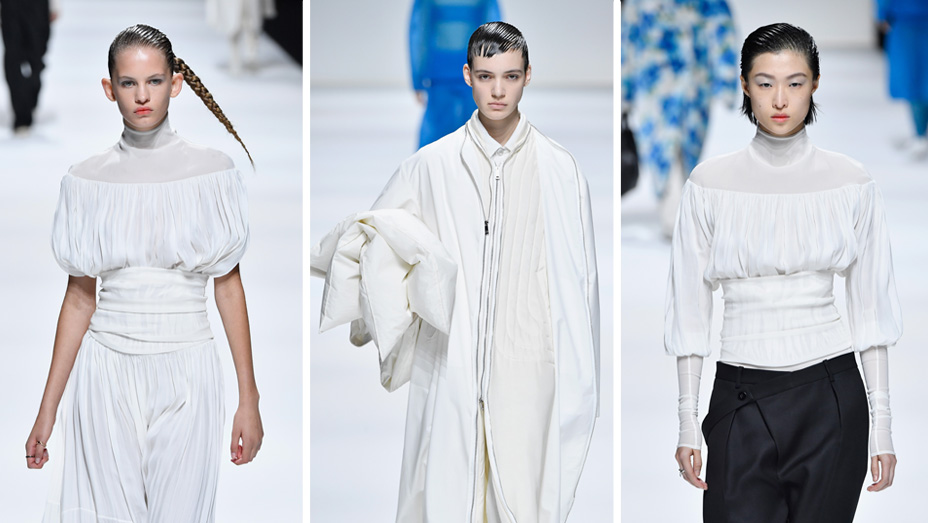 A red sweater dress artfully draped to highlight the curves, pleated peasant blouses and dresses with turtlenecks and soft, barely noticeable corset details, and jackets with extra-long sleeves cinched with armbands looked right for the political moment, too. These two designers are ones to watch. 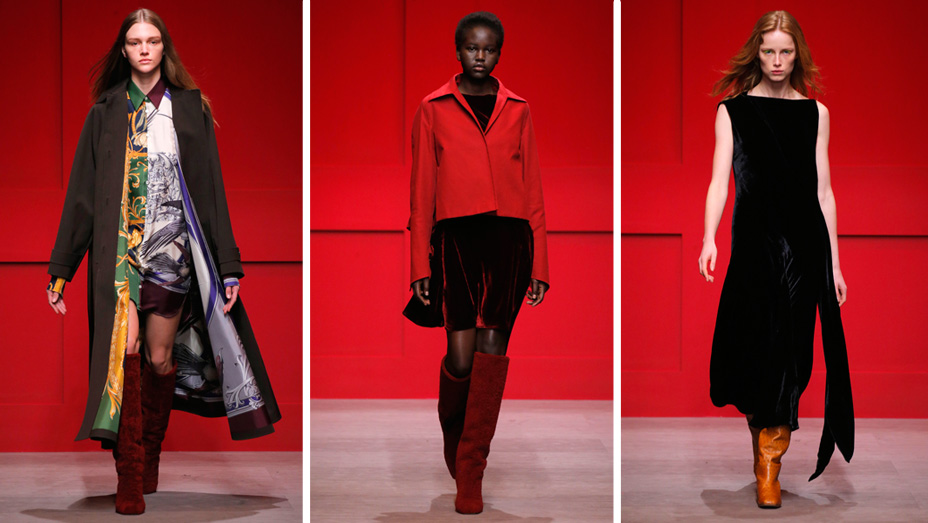 Ferragamo, the Next Generation

Famed Italian brand Salvatore Ferragamo has also rebooted its collection, with the help of shoe designer Paul Andrew, who presented his first womenswear clothing collection for the brand Saturday, alongside menswear by Gaillaume Meilland.

To honor Ferragamo’s heritage as a shoe brand first, Andrew’s vison came from the ground up, and one only had to look at the show-stopping shearling, knee-high boots dyed red or green “like ‘70s shag pile carpeting,” to recognize the new ease he will bring to the brand. 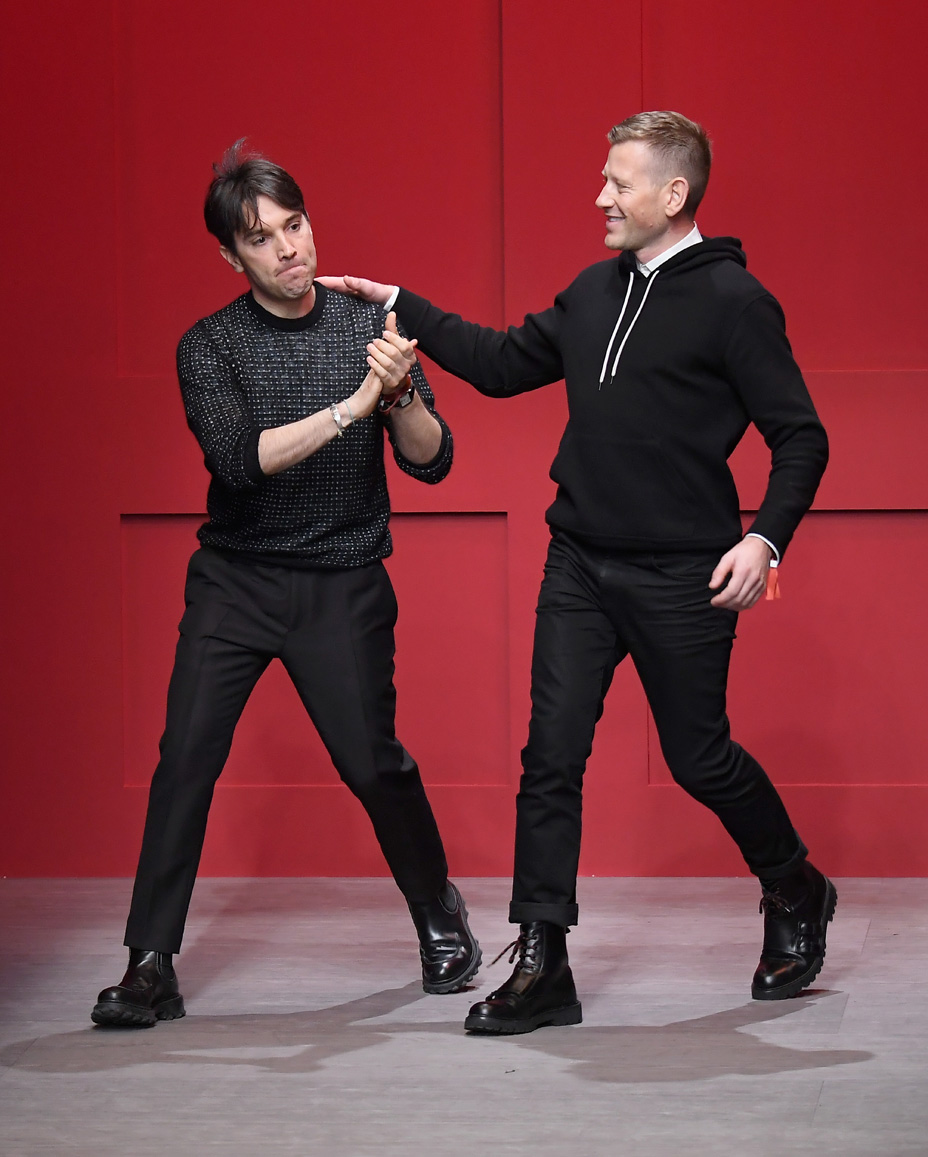 Ostrich or nappa leather boots with glazed gold heels finished in automobile factories also served as anchors for the range of covetable outerwear dominated by leather, naturally, including dramatic ponchos, shirt dresses in merlot-hued silk or made with archival Ferragamo scarves, “parakeet green” or pewter blue leather blazers and pants (the glaring, ill-fitting miss in the collection). 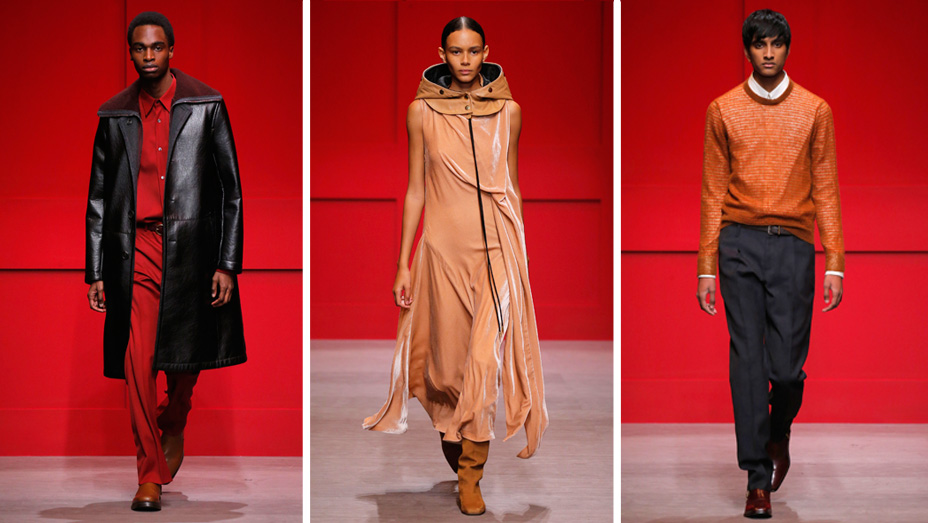 Andrew told the Associated Press he was inspired by the depiction of Princess Margaret as a “naughty aristocrat” in The Crown, hence the black velvet dress with the ease of a T-shirt that looked like it could have been slept in all night — in a good way. I’m looking forward to seeing what Andrew does with the brand’s Hollywood heritage, too, since Ferragamo himself spent his first years as a cobbler to the stars in 1940s L.A. 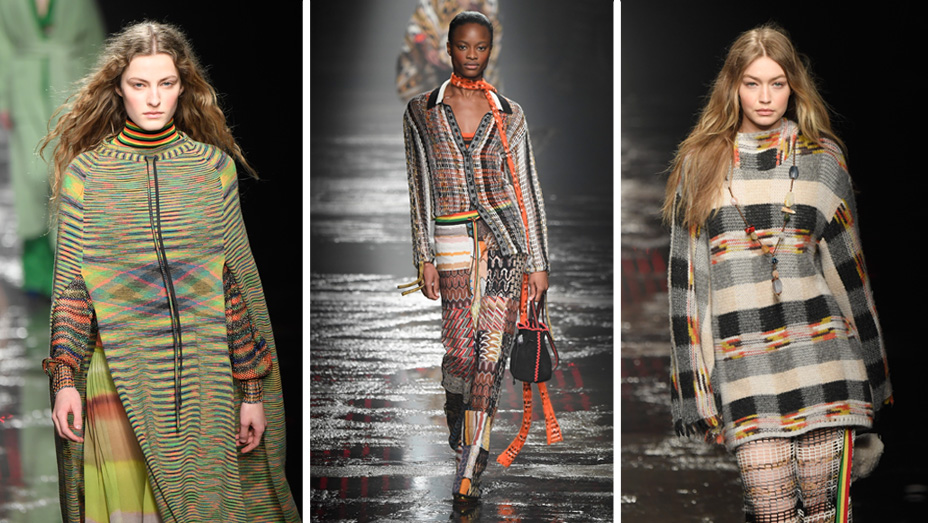 It was all about ease for Angela Missoni, too, who remixed her famous knits with a Burning Man, Rasta, rave vibe in mind, setting the show in an intentionally damp, concrete-floored space (no joke, there were guys “watering” the runway), and opening with a laser light feature. The only thing missing was the ganga.

The silhouette was long and lean, with flared knit pants (like the rainbow side-striped pair worn by Gigi Hadid) paired with oversize cardigans or ponchos, miniskirts and knit dresses left unfinished with hanging fringe, plus plenty of beanies and crystal jewelry. 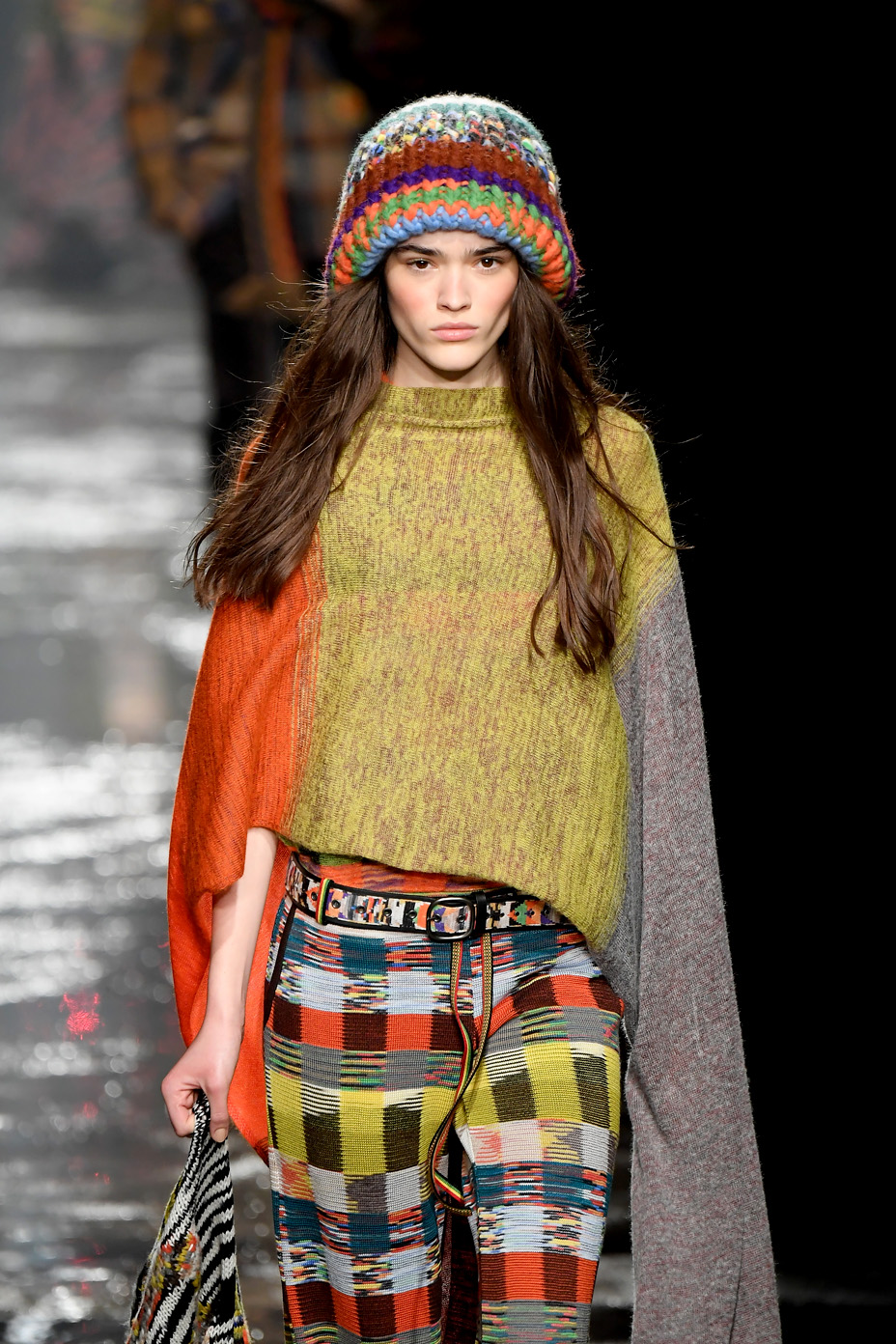 Shawls, pants legs and skirt hems dragging in the muck was surely supposed to be part of the devil-may-care attitude, even if it did leave some fashion fans cringing to see models treating beautiful clothes this way. Or maybe it just adds to the charm?

Cringing at all the beautiful clothes dragging on the intentionally water-slicked runway at @Missoni #mfw pic.twitter.com/8UtaTIt8UN