Welcome to the Moschino game show. At Jeremy Scott’s fall 2019 show in Milan, attendees were grinning ear-to-ear throughout as Scott built his own Price is Right set, complete with Vanna White makeup, ’70s Dolly Parton wigs, Press Your Luck iconography and prizes galore: a trip to Aspen, a brass bedroom set, a new washer or even…a brand-new car! 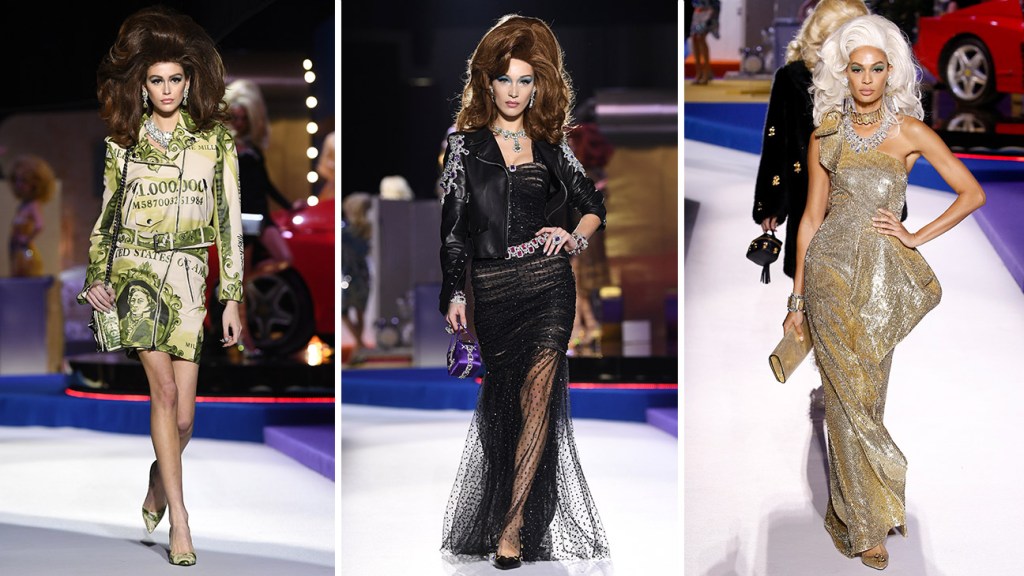 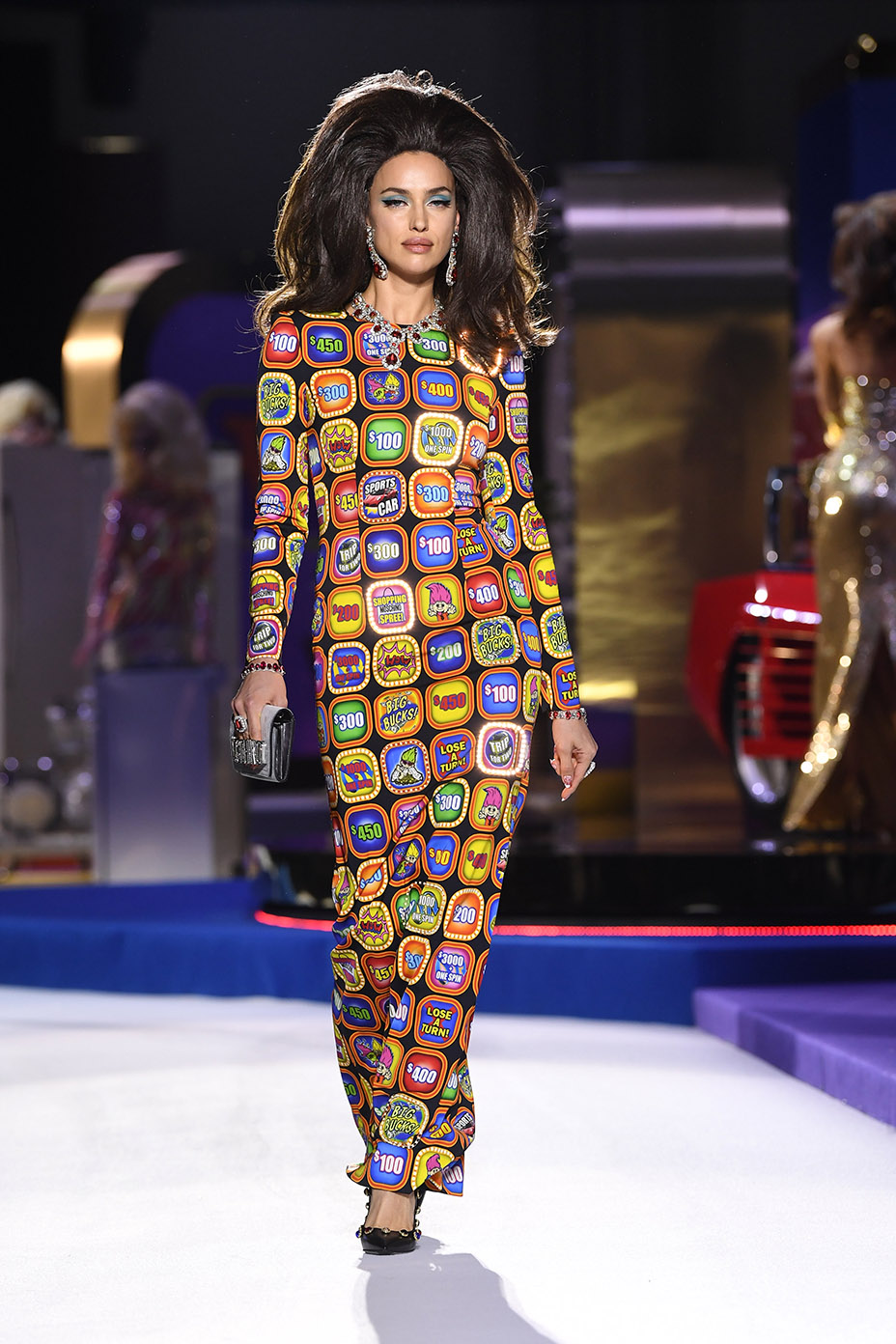 The over-the-top camp that has been a signature for the brand ever since Scott debuted his first Moschino collection five years ago cued right in to the “camp” theme of the much-anticipated Met Gala in May. And the show again confirmed Moschino as the king of fashion as protest against an industry that often takes itself too seriously. 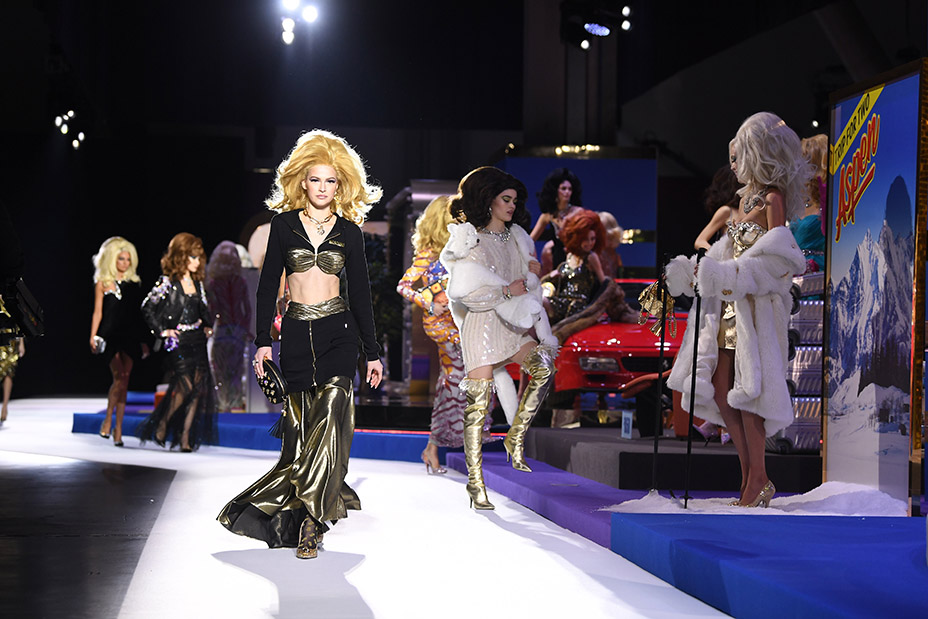 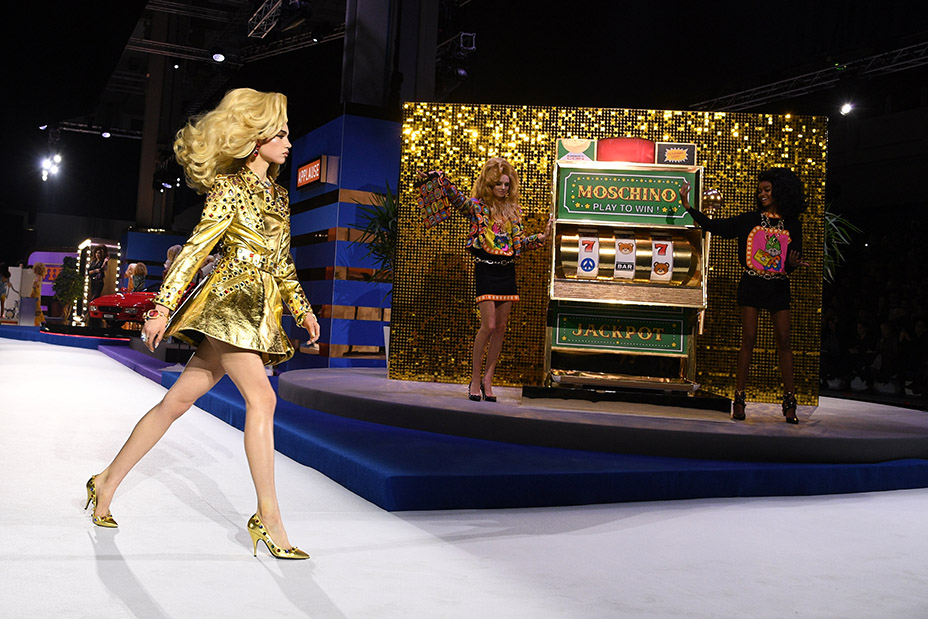 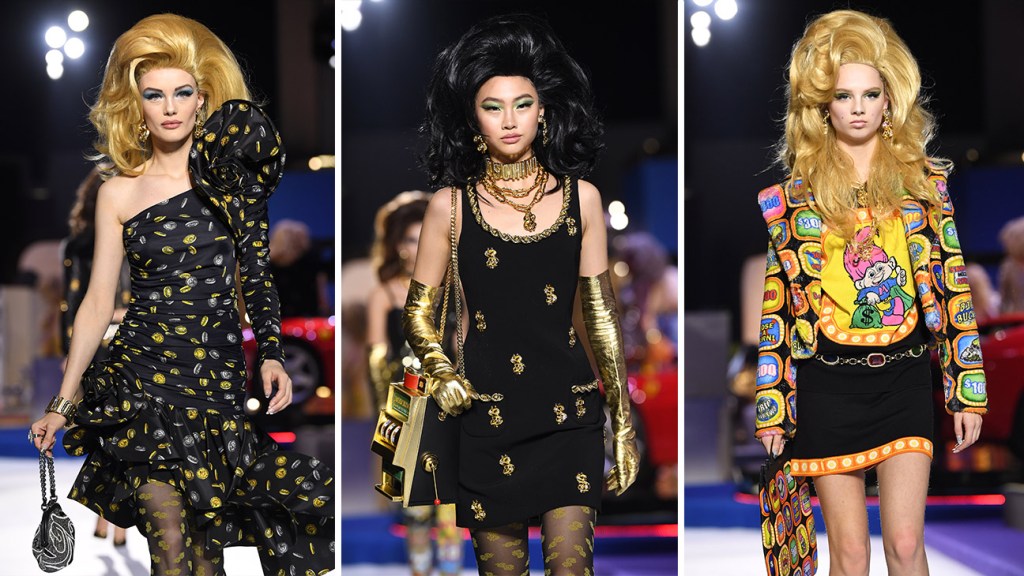 This year’s show seemed especially timely as a welcome reprieve against the anxiety of daily news headlines (a theme that Scott highlighted, literally, in newspaper patterns in the fall 2019 show for his eponymous label in New York earlier this month). By contrast, this collection tuned in to the friendly nostalgia of a time when everyone can be a winner with the spin of a wheel. Donning spangled pieces embellished with patterns of slot machines or dollar bills, plus bouffant hair up to there, the models whooped it up, posing as Price is Right showgirls. 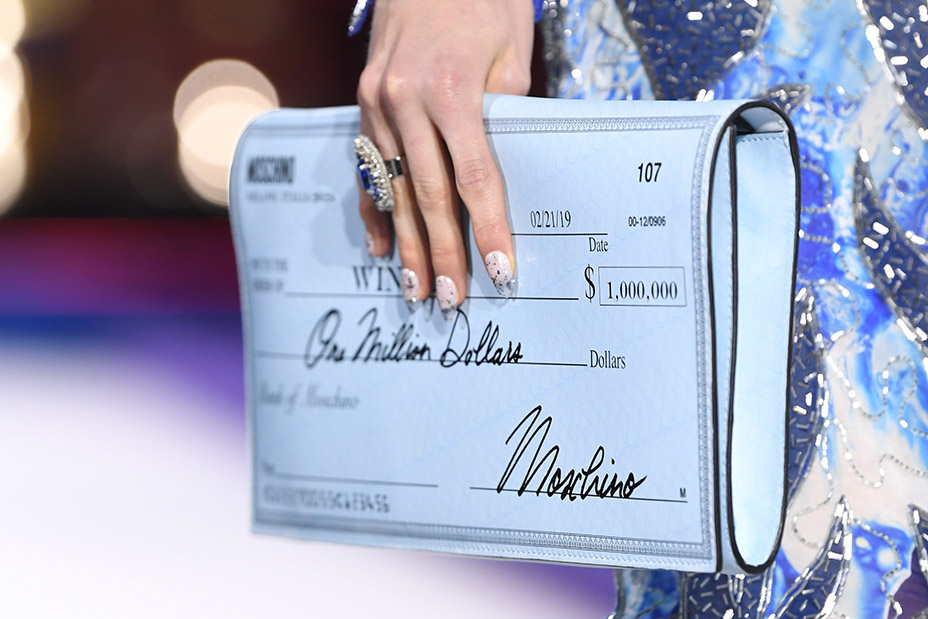 Irina Shayk made Press Your Luck “Whammies” sexy in a skin-tight gown that popped with prizes, while Bella Hadid looked Met Ball-ready in a sparkling tulle mini dress with a floor-length sheer skirt, dripping with fake rubies and Kaia Gerber looked like a million bucks in a swinging ‘70s skirt suit with a moneyed pattern. 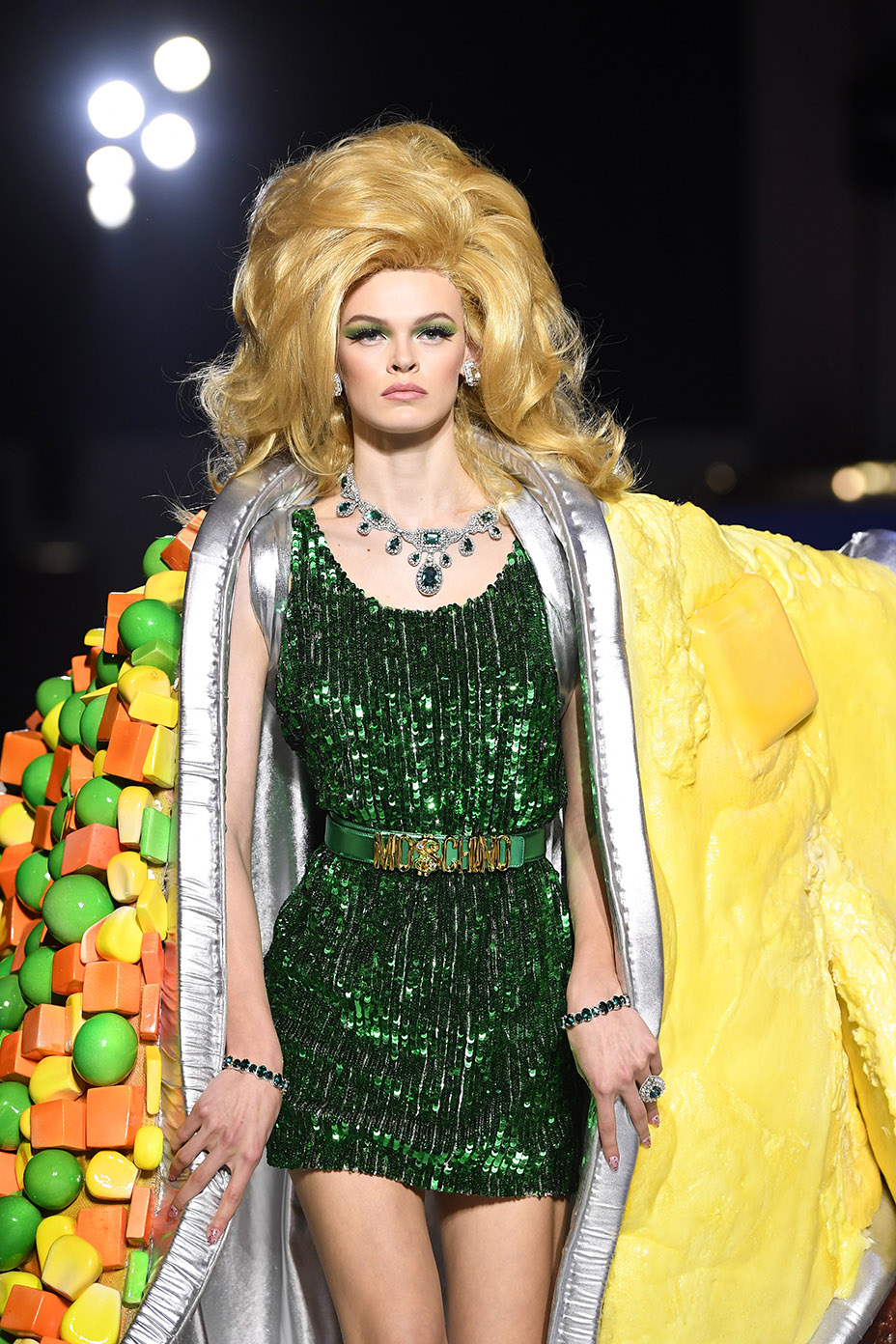 Joan Smalls was the couture version of a bar of gold, radiant in a full-length origami beaded gown, adorned with loads of chunky jewelry. 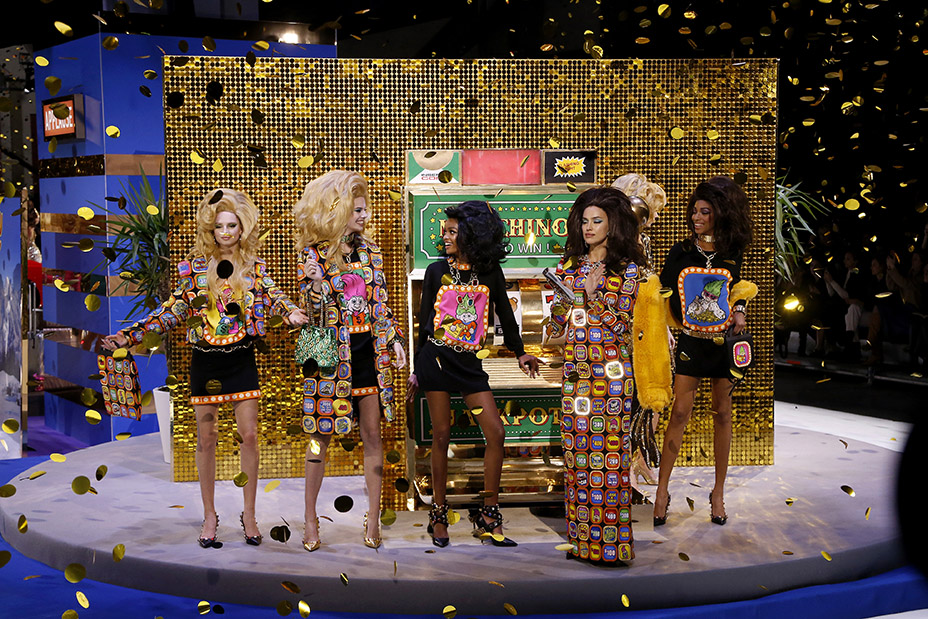 Faux embellishments went from big to bigger – crystal-lined silk jersey dresses, chandelier costume jewelry, and handbags once again crafted into objects of play, from a champagne bottle to a slot machine to a million-dollar check. 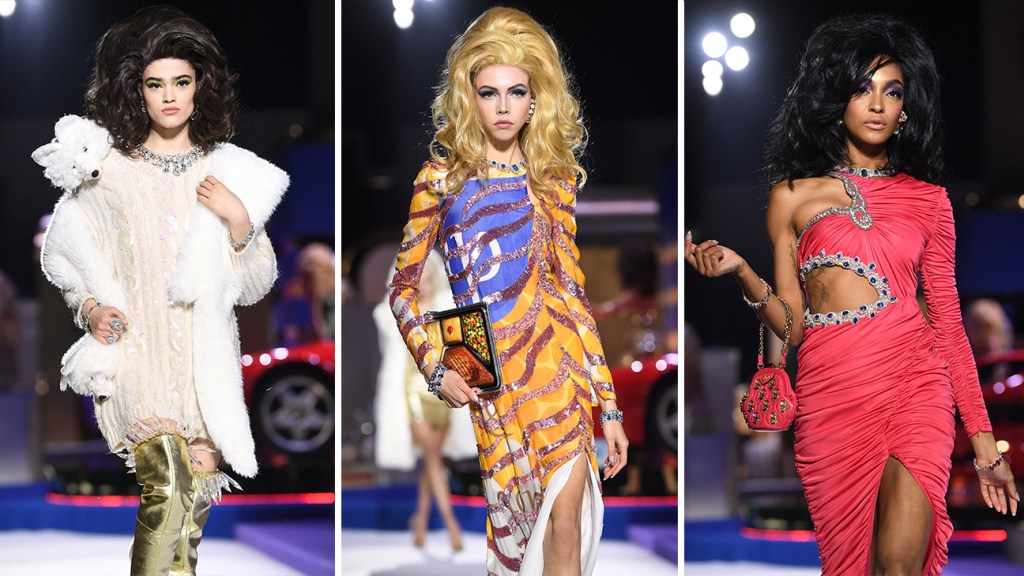 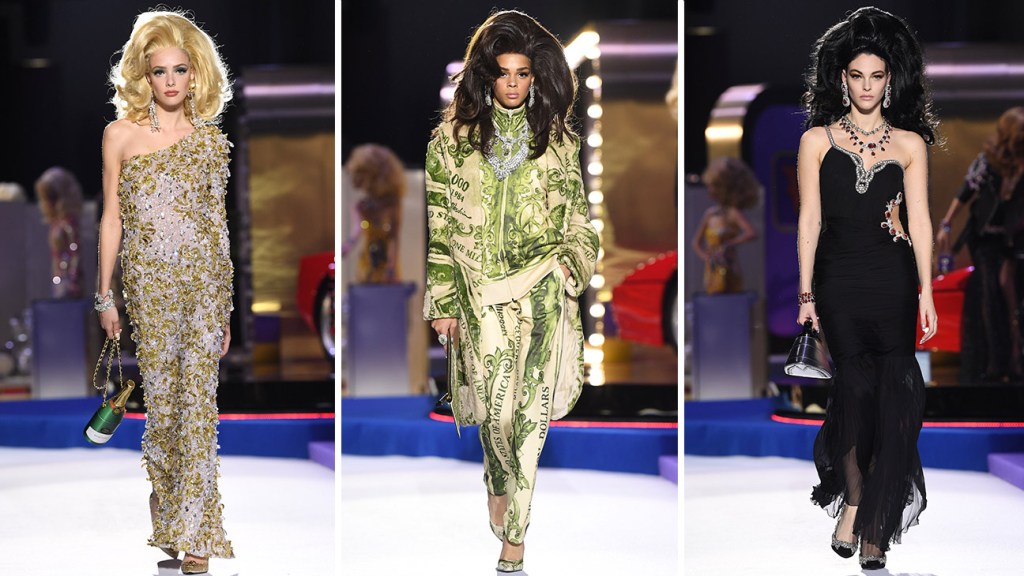 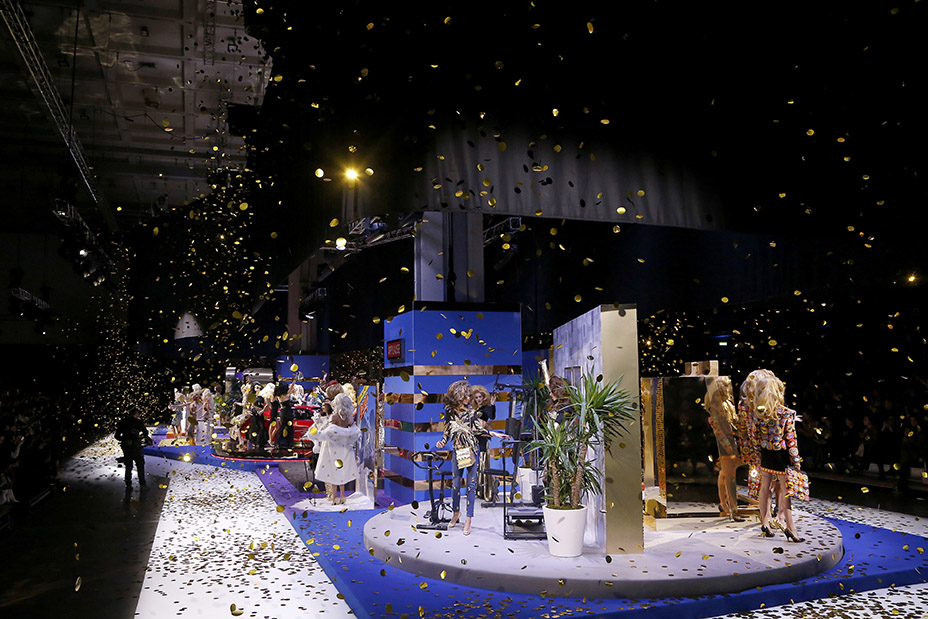 The most Instagrammable moment went to the TV dinner cape, a heavy metallic sculpture complete with a giant Salisbury steak, peas and carrots, mashed potatoes and butter. It was a moment anyone who remembers eating frozen dinners in front of the television back in the day could appreciate. But the green sequin minidress underneath was equally buzz-worthy, a perfect ode to ’70s swing and 2019 red carpet ease. The message was clear: In Moschino, everyone is a winner. 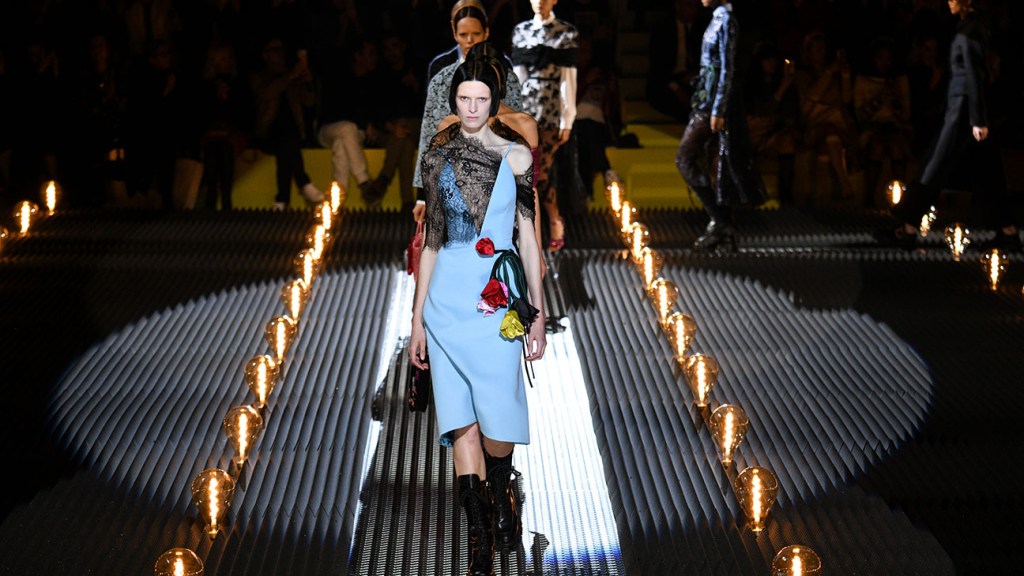 Over at Prada, the runway took inspiration from film and television, but in a completely different way. Miuccia Prada went for gothic romance, taking inspiration from some of horror’s biggest icons in her show “Anatomy of Romance.” 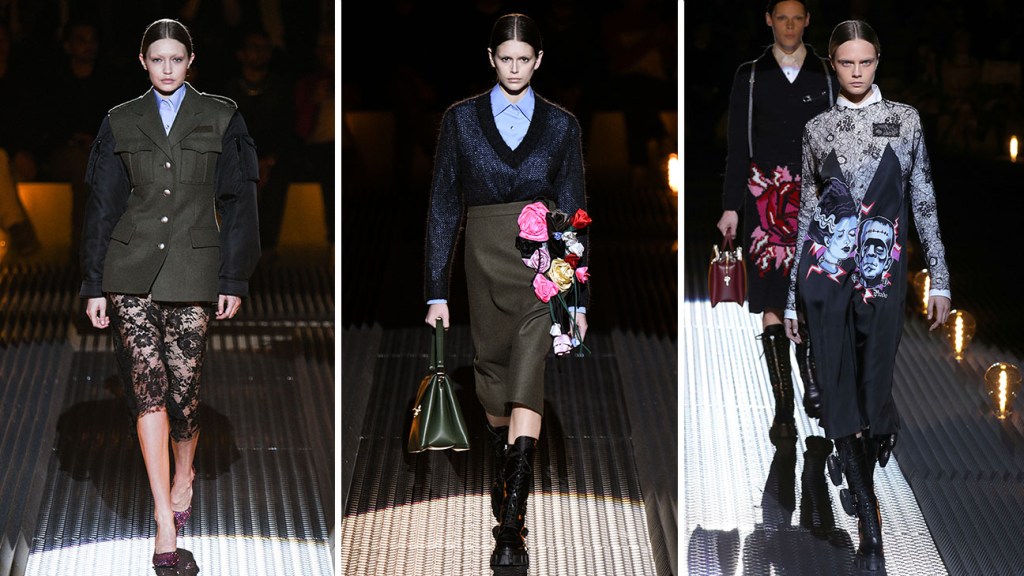 Cara Delevingne wore a long-sleeved, lacy dress adorned with a wedding portrait of Frankenstein and his bride. In Miuccia Prada’s world, everyone, even monsters, are just looking for love at the end of the day. Prada described him as “an emblem in search of the sublime, like fashion itself. A romantic concept.” 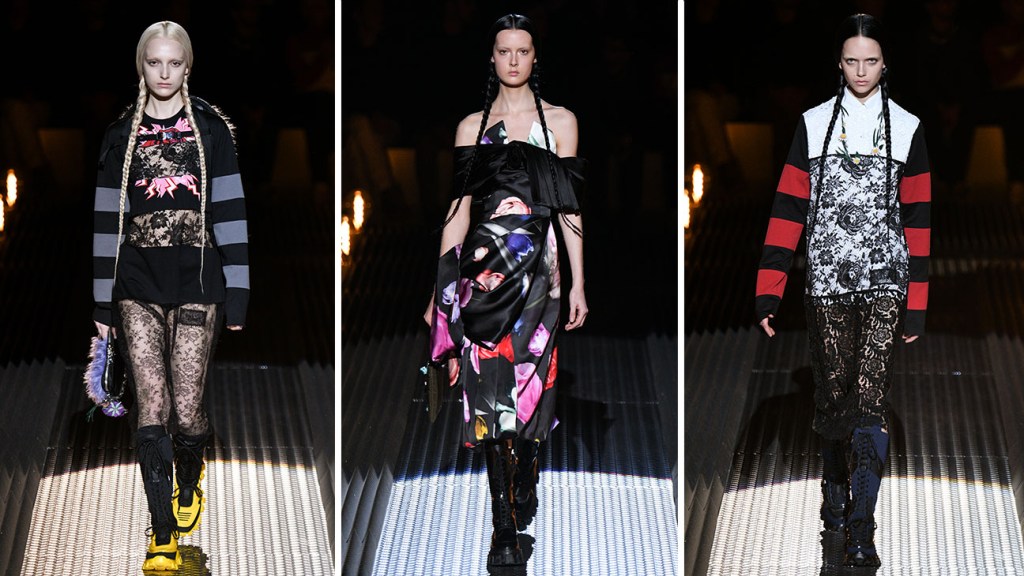 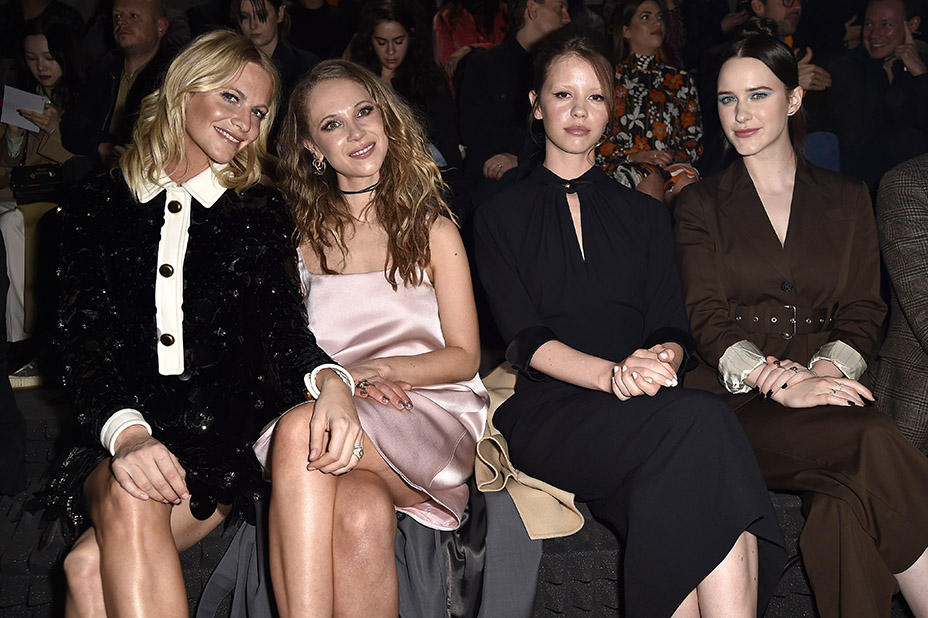 Prada likewise aimed to offer an escape from the daily onslaught of bad news through her collection. “Romance can be an antidote to the harshness of our times,” she explained. “This collection is a reaction to and reflection of humanity, of our strengths and fragilities.”