Occupying a seat in the front row next to Sofia Coppola at Miuccia Prada’s show Thursday evening at Milan Fashion Week, Spike Lee surely felt a kindred spirit with the designer. who was about to debut her Spring 2019 collection: “She’s innovative and isn’t afraid to take chances. And the clothes are very hip,” he said.

The BlacKkKlansman director will be back at Fondazione Prada on Friday night with Mudbound director Dee Rees for a panel discussion about black cinema with artist Theaster Gates, whose exhibition, “The Black Image Corporation,” premiered in the space earlier this week. The panel caps a marathon day of films that includes Otto Preminger’s Carmen Jones and Stanley Kramer’s The Defiant Ones, as well as Lee’s Do the Right Thing, while BlacKkKlansmen is set to screen at Fondazione Prada in October.

Miuccia Prada, who is co-sponsoring the exhibition with her husband, Prada CEO Patrizio Bertelli, is always on the hunt for contemporary art exhibitions that inspire conversation to populate their Milan foundation. She likewise extends this challenge to how you consider her collections, and her latest, unveiled in the same modernist building, was no exception. “Bravissima,” said one woman while the crowd exited, and even if the comment was solely credited to the inventive mix of these spring clothes — and how Prada’s diverse audience might find them appealing — it would be difficult to disagree. 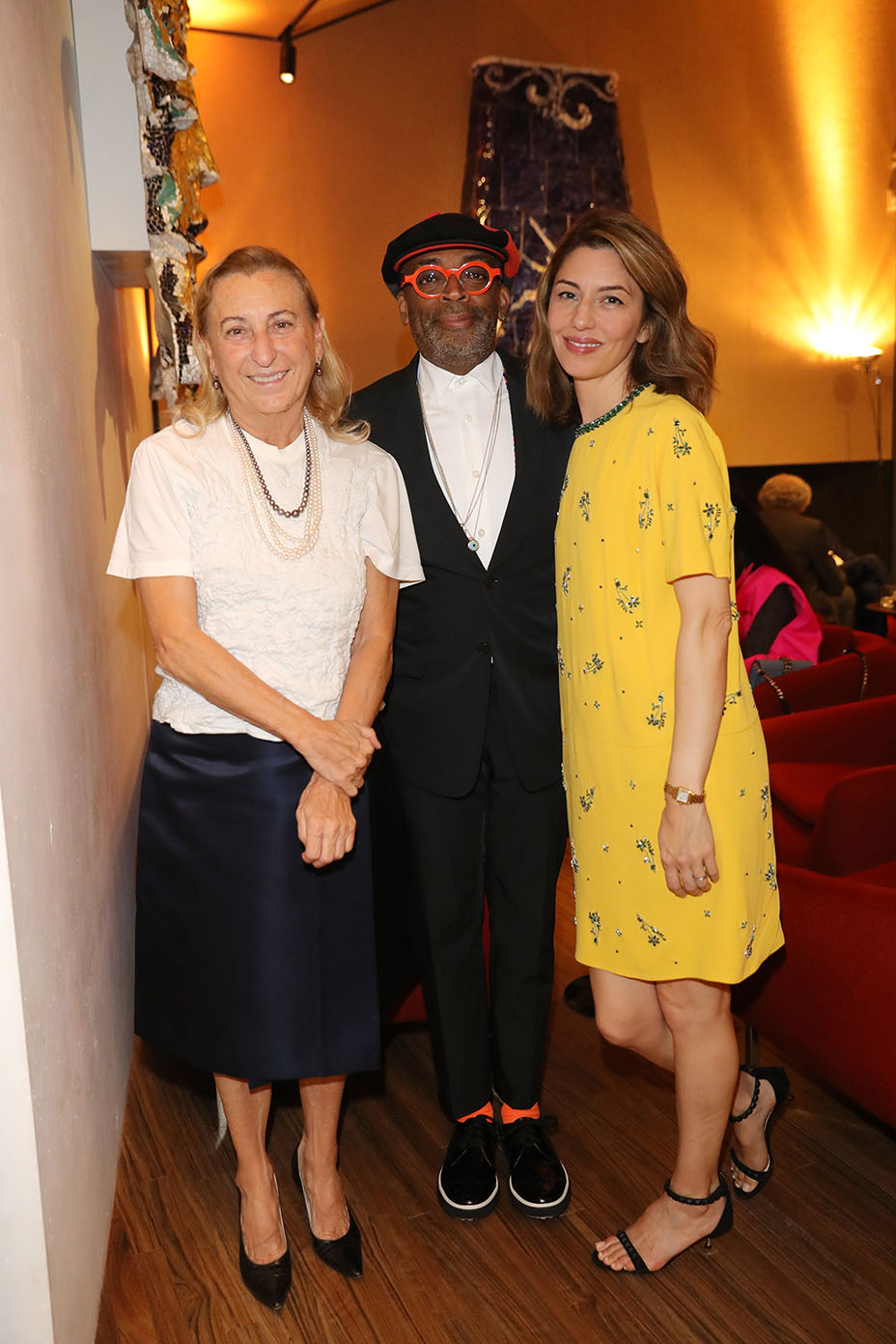 The collection kicked off with a bit of an androgynous vibe via knee-length belted shorts and high-necked satin T’s adorned with Prada’s diminutive triangle logo on the chest pocket; a small tied bow at the neck was the look’s only nod to femininity. But things softened from there, with A-line coats and minidresses veering into ‘60s territory, especially when paired with a structured, trapezoid-shaped flap handbag in the crook of a model’s elbow, including one stunner in red leather.

An undeniable athleticism was infused throughout the collection, from the plunging tanks — most featuring strategic straps to avoid a wardrobe malfunction — to the mesh, runner-inspired shoes that competed for attention with more polished Mary Janes. And all those A-line babydoll dresses in particular were saved from feeling too precious, courtesy of cutouts along the decolletage or across the shoulder blades, while white cotton blouses likewise included the detail, as well as cutouts that bared the elbows. Both felt equal parts modern and breezy, the latter idea appreciated as Milan’s fashion week, like New York before it, is feeling a bit steamy in its early days.

Throughout the collection there existed an unabashed melding of the sporty with the ladylike, athletic-driven details paired with the inherent girlishness of an A-line silhouette. It’s an endless conversation about how to attract new and younger clients while not alienating the women who made you a star in your earliest days, and perhaps Miuccia Prada has hit upon a successful formula, crafting a discerning mix that honors both camps with equal aplomb. 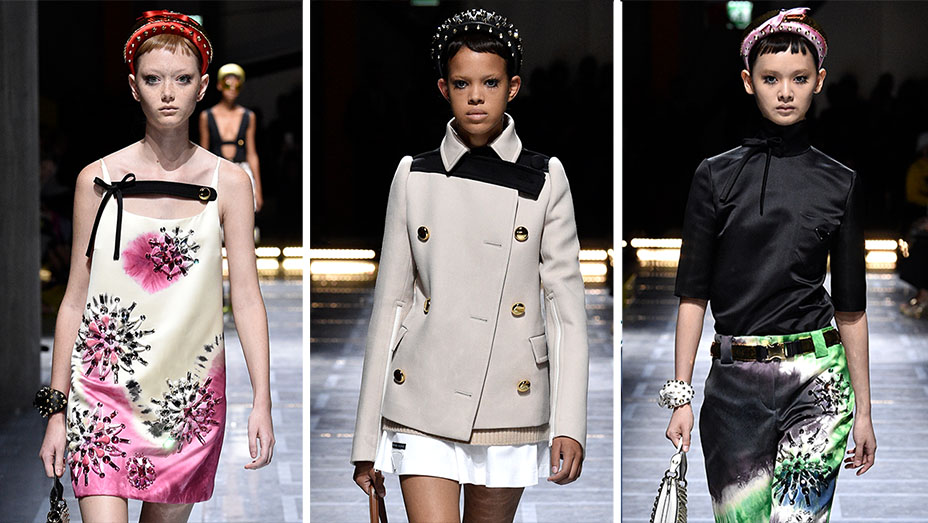 This idea was equally true with the evening pieces, which ranged from sheer black lace dresses to a pair of cocktail looks embellished with oversized paillettes — it wouldn’t be surprising if stylists are already clamoring to reserve these for upcoming red carpets. A grouping of A-line skirts, meanwhile, printed with watercolor scenes and accented with chunky crystals and noir paillettes that seemed to burst unexpectedly from the front panel, should be quick favorites among Prada devotees.

Indeed, as another hint toward Miuccia’s respect for her clients’ loyalty, black was strong among the collection’s color palette, amid splashes of candy-apple red and spring’s ubiquitous neon green, sure to become the must-have hue in your closet next season. Then again, it’s an easy bet that you would want to wear the black skirt Miuccia Prada was sporting as she took her bow, its logo-accented pocket along the hemline evoking thoughts of her earliest and most iconic nylon bags. Mixing heritage with modernity and an unexpected detail? That’s the way to nurture fans of all ages. 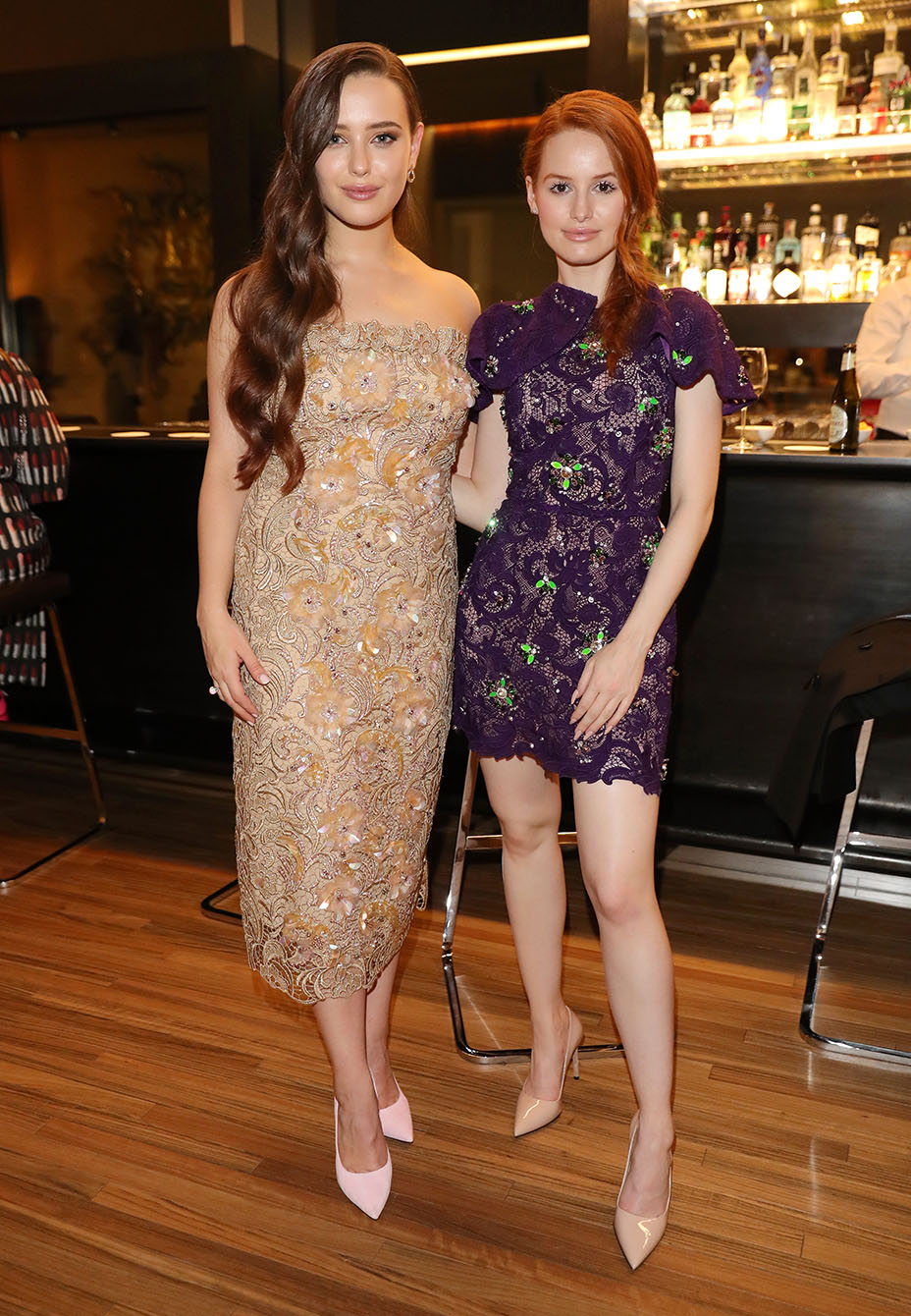 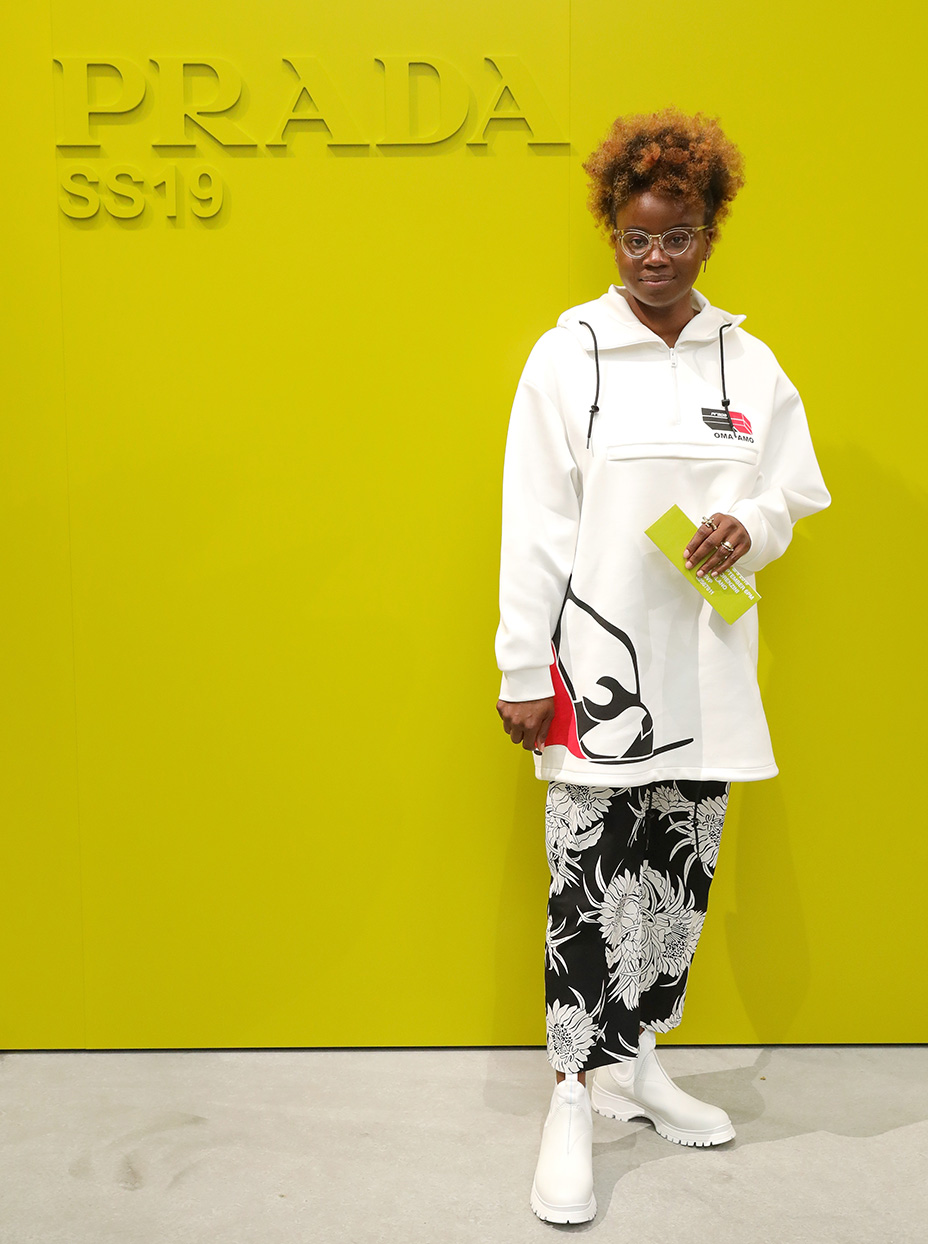 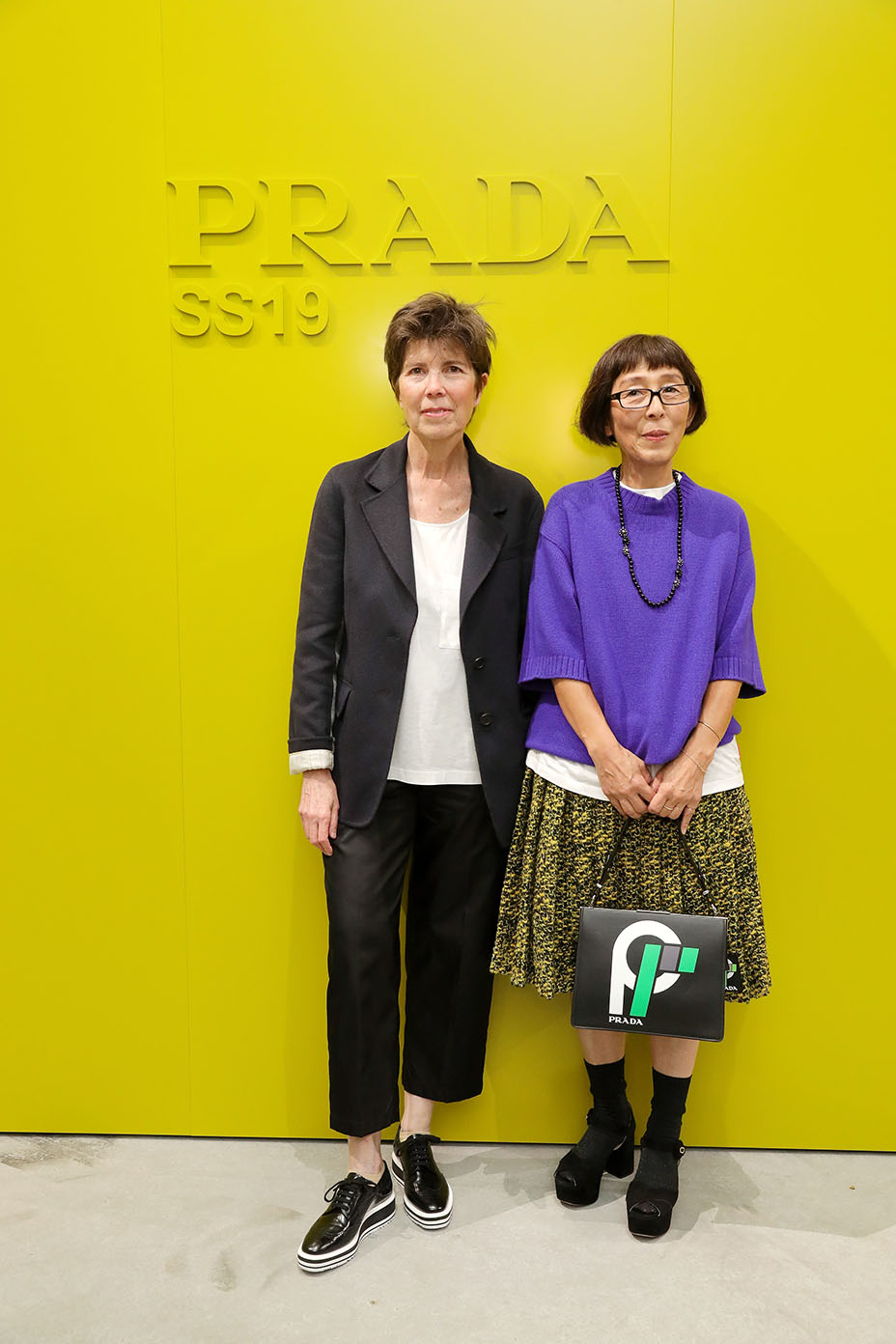 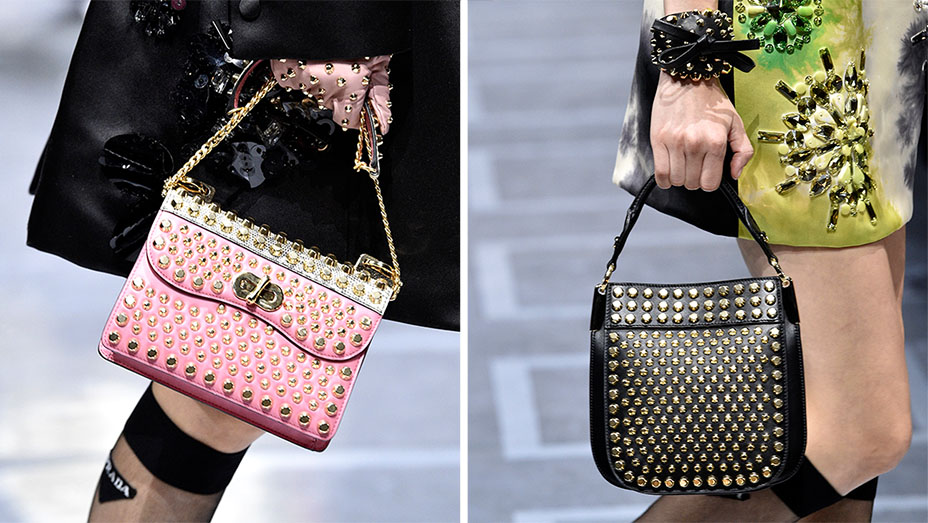