Miley Cyrus had a major #TBT on Thursday night, when she stepped out in an upbeat mood (despite being under the weather with the flu) in a new Hannah Montana-inspired long blonde hairdo with bangs to toast the Los Angeles rollout of Hampton Water, the award-winning upscale rosé created in early 2018 by rocker Jon Bon Jovi and his son Jesse Bongiovi in partnership with French winemaker Gérard Bertrand.

“Hannah drinks and hangs with Jon Bon Jovi now NBD” and “Legends only” Cyrus captioned Instagram Story pics of herself sipping Hampton Water with Bon Jovi at the soirée, which was held on Harriet’s Rooftop at The Jeremy West Hollywood hotel. 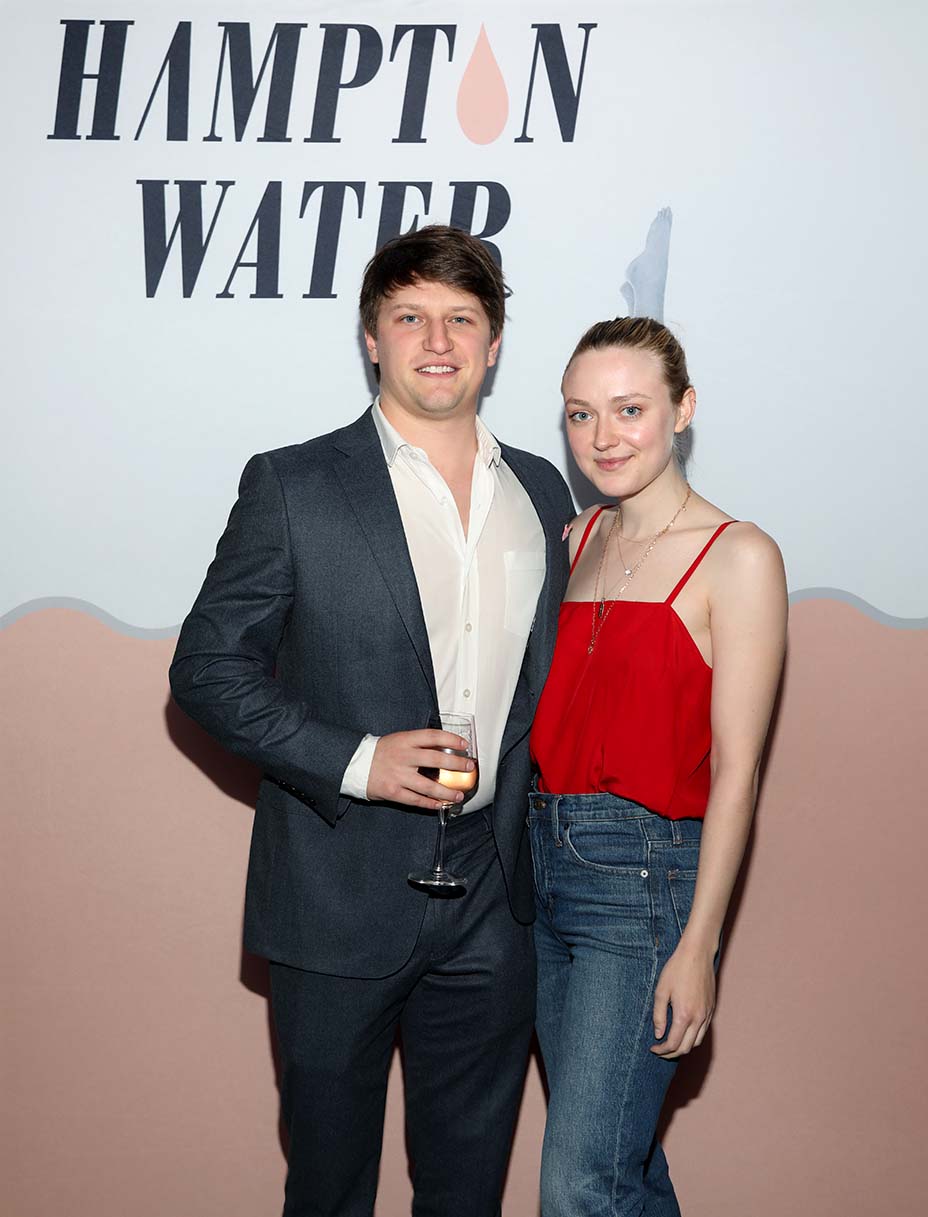 Hampton Water ($25 per bottle), a blend of Grenache, Cinsault and Mourvèdre grapes from the coastal Languedoc region of southern France, earned a 90-point rating and was the first rosé to make the Wine Spectator Top 100 list. Gayle King, Christie Brinkley, Chris Martin, Jamie Foxx, Sean Combs, Andy Cohen, Adam Rippon and Shaquille O’Neal are among the fans of the rosé, now sold in 22 states. Before all the festivities began, Bon Jovi and Bongiovi sat down with The Hollywood Reporter to chat about their wine. 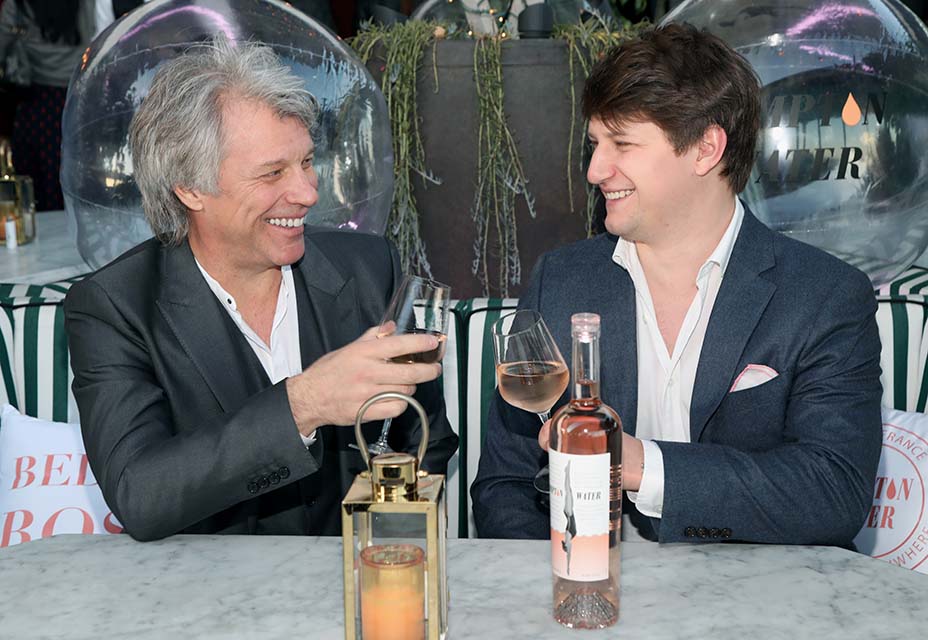 “We were ahead of this curve,” said Bon Jovi, speaking to the burst in market popularity of rosé over the past decade. “On the East Coast, people knew rosé for quite a while. Out in the Hamptons, where I’ve had a house for 15 years, we would often drink Domaines Ott and you had to import it by the case because no one really knew what it was. But a lot of New Yorkers tend to go to the South of France for the summer, and so they were very familiar with good rosés from Provence. So that’s how our story began.”

He continued: “One night, very late, I was on the porch drinking and feeling guilty about the quantity and the calorie count, so I said to Jesse and Ali [Thomas, his college roommate], ‘Would you like some pink juice?’ And they jokingly retorted, ‘Dad, we don’t call it ‘pink juice’ anymore; we call it ‘Hampton water.’ And we both did a double take and said, ‘That sounds like a wine.’ So they were challenged to come back to me with a business plan.

“Being the genius college graduates they were from the great University of Notre Dame, they came back with a plan [including] the label, the bottle and the concept,” said Bon Jovi. “We were able to go to the right people with it [at Southern Wine & Spirits]. I was willing to go and buy white label or something and just figure it out. But they said, ‘We know the right vintner for you.’ And it was a guy named Gérard Bertrand. So we did the same pitch and he said, ‘Look, I’ll sell you grapes, I’ll import your grapes or, if we hit it off, I’d love to be a part of it.’ And so we brought him in.” 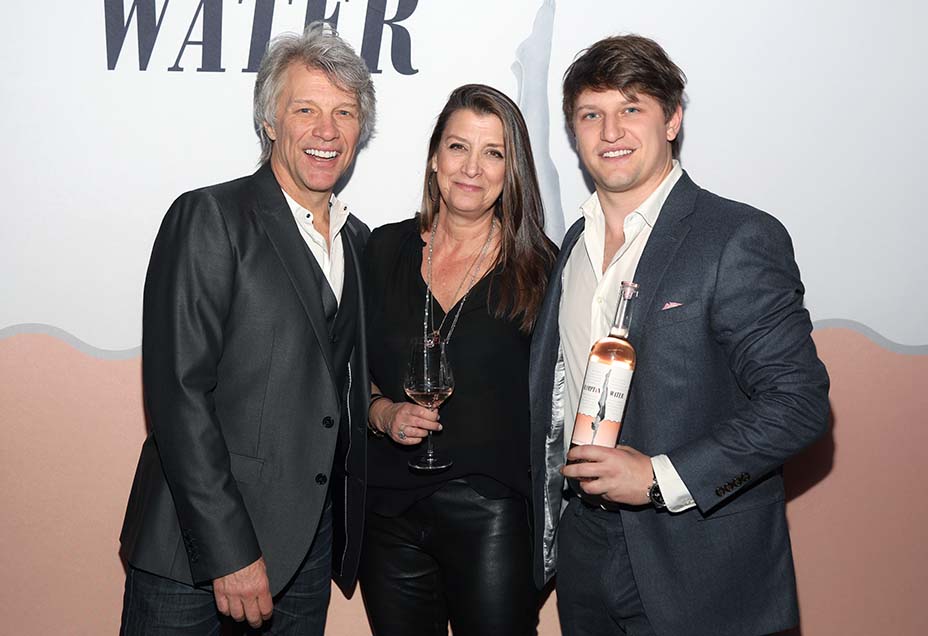 As for misconceptions about rosé they would like to shift, Bongiovi said, “People think that rosé is going to be sweet and that it’s going to give them a headache. Ours is not and it does not. A big part of our blending process and the grapes that we chose led to the taste profiles. It’s much drier and more fruit-forward as opposed to sweet, and part of it is oak-aged. Having to get over the educational curve is challenging.”

“Another thing is that rosé is perceived to be a summer drink and we want to change that,” Bon Jovi chimed in. “Why not have it at Thanksgiving before you sit down and drink your reds with the meal? Why not have it throughout the holidays? And there are [stereotypes] of the cheap seven-dollar bottles of rosé that the housewife drinks around the pool, but there are also premium rosés like the original Domaines Ott, which set the bar very high.”

That’s where Bertrand came in, as he pushed the father-and-son team to look beyond “big-box stores” to create a premium product ”the right way, for the long haul,” said Bon Jovi. “So we literally blended the wine with test tubes and eye droppers. And the second year, we went back [to France] and picked the grapes and tasted them and learned about them and Gérard had us lick rocks! I said, ‘Are you bullying me?’ You’re tasting the terroir: the Mediterranean sea, the air, the dirt the grapes grow in. And when you taste it, he shows you the salt on the rock. He can [even] tell by the way the wind is blowing how good the grape is. It’s been an interesting education. It’s much more than, ‘Hey, here’s a bottle of booze.’”

While the duo teased plans to expand the line with a series of blends, Bon Jovi said that is still a couple years out and that the company is focused on expanding distribution.

As Bon Jovi’s band gears up to kick off the next leg of their This House Is Not for Sale tour, starting in Moscow in May (where the frontman says he has not been for 30 years), he affirmed that Hampton Water is indeed the group’s backstage beverage of choice, adding that “it’s the official rosé of Madison Square Garden and The Forum in L.A.” Asked if he might come up with a musical pairing for his pink wine, the 57-year-old rock star quipped, “I guess the worst cliché would be ‘Bed of Roses’ rosé, but we’re not going there!” 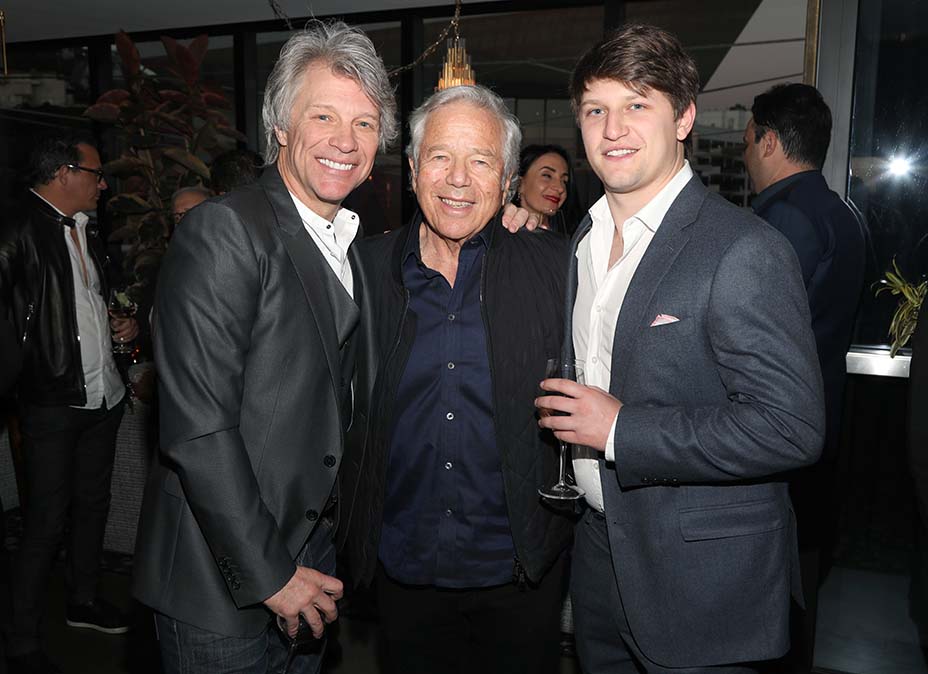