When you’re designing clothes for Mindy Kaling, there are two rules to live by.

“Sparkle [and] color,” says Salvador Perez, who has dressed the actress and showrunner for all six seasons of The Mindy Project. “It’s Mindy 101.”

And parkle and color are certainly the order of the day at The Mindy Project: Six Seasons of Style, a new exhibition at the Paley Center in Beverly Hills that was hand-curated by the Emmy-nominated costume designer, who is also the president of the Costume Designers Guild. Given how many eye-catching outfits Kaling’s character Mindy Lahiri goes through on each episode, choosing the cream of the crop wasn’t an easy feat.

On Thursday evening, Perez led a gaggle of press on a breezy tour of the exhibition, spread over two floors of the light-filled gallery on Beverly Drive. Early on, he highlighted the season-one ensemble that cemented his and Kaling’s creative relationship. 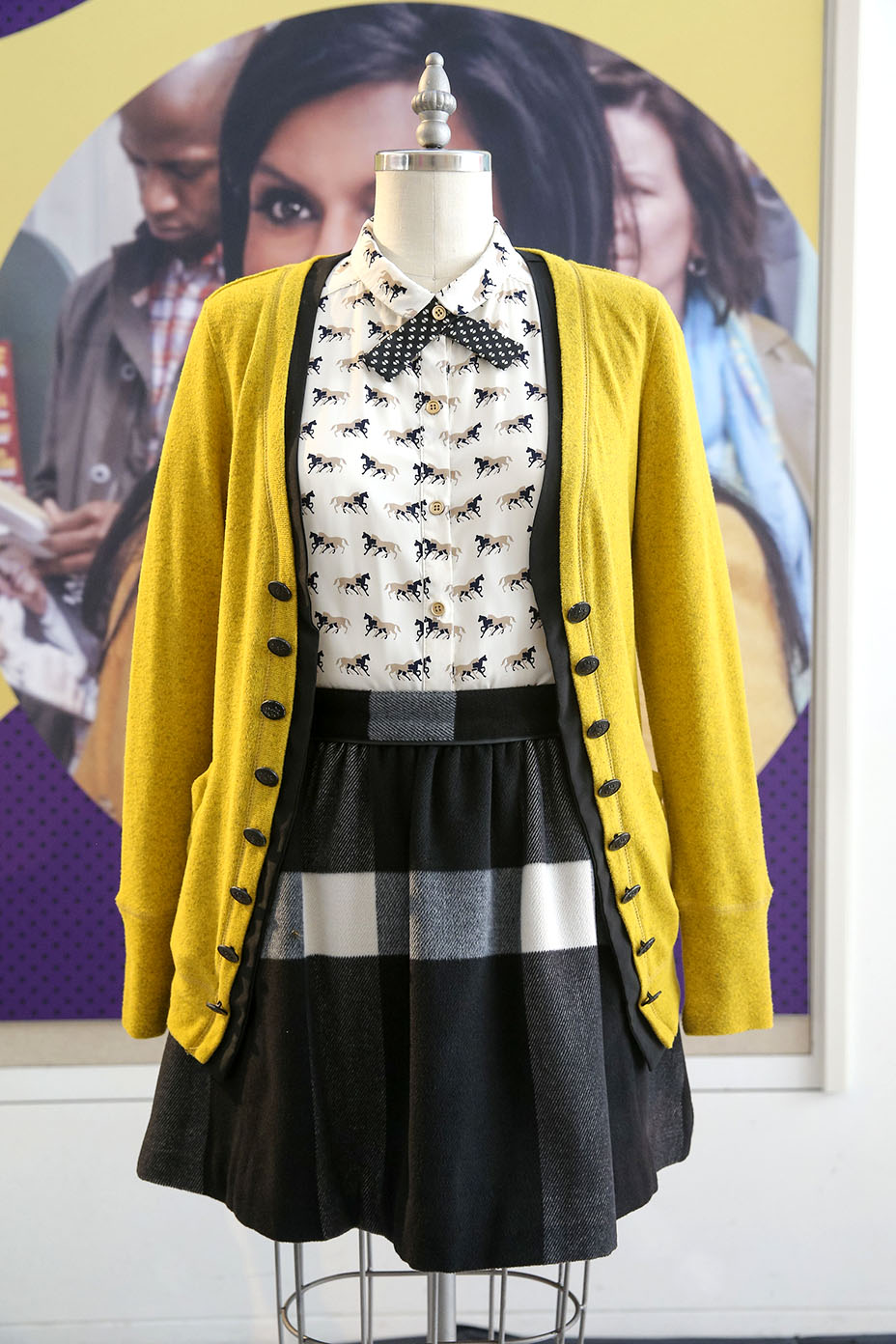 “One day I pulled the little outfit that’s the horse shirt, which is a print, with the plaid skirt and the yellow sweater. And Mindy lit up,” Perez says. “And she’s, like, ‘I love that there’s all this going on.’ And I’m, like, ‘You do? Cause normally I’m told not to do that.’ And I realized that we were kindred spirits.”

Moving through the space, loud colors and bold mixed prints stand out against white walls adorned with pink quote bubbles (“These are performance rhinestones,” reads one). For each costume, Perez had a story to match.

“I thought, ‘What would a much younger Mindy wear to the office?’” he remarks of a custom-made pink brocade suit used in a season-four flashback. “And I said, ‘Well, she’d be Barbie.’ And so that’s literally a Barbie suit, hand-beaded with pearls and crystals.” 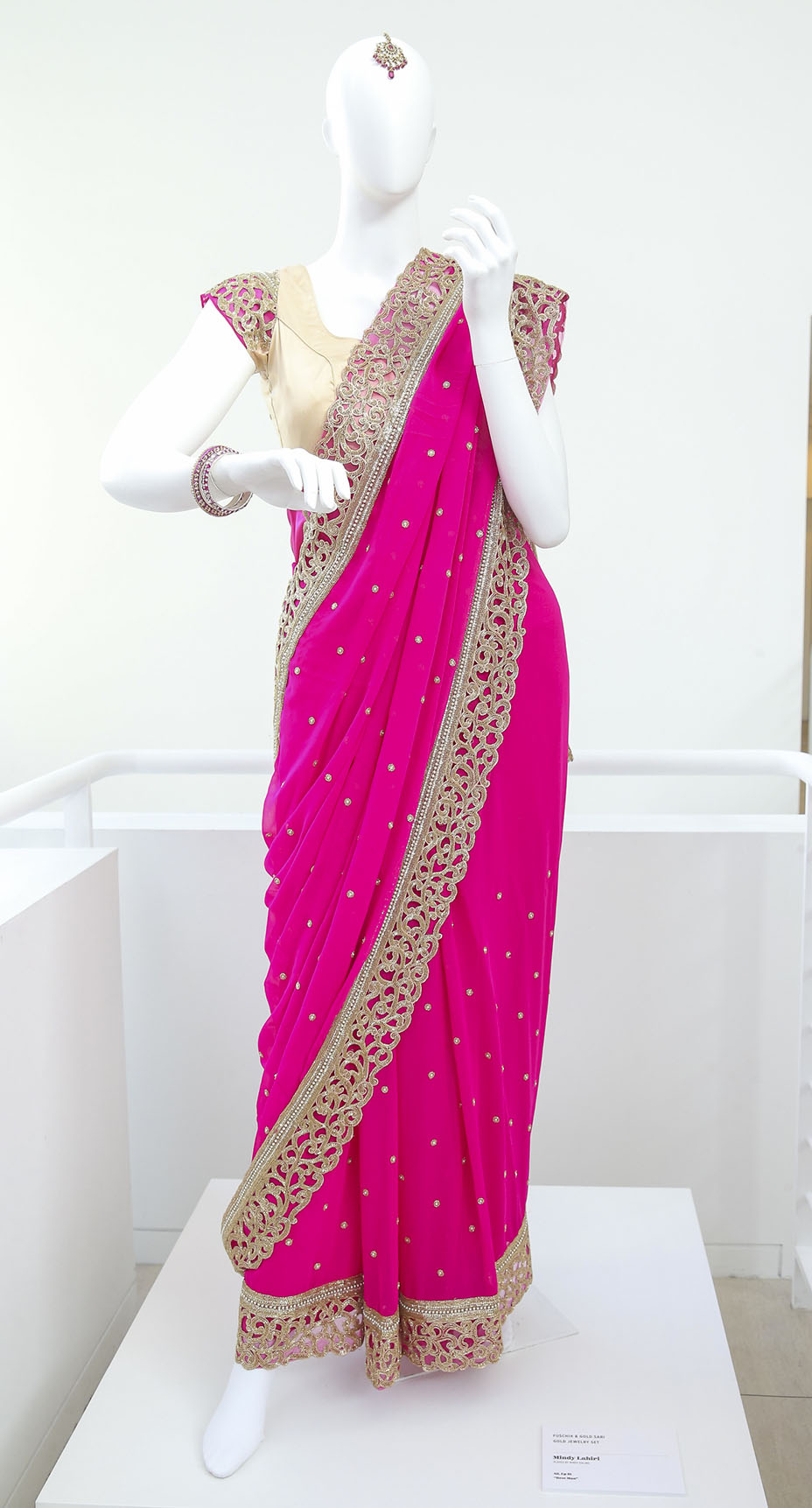 Upstairs on the mezzanine, visitors are immediately greeted by a fuschia sari trimmed with gold used in the season-three episode “Best Man.” This was the first time Perez outfitted his Indian-American star in one of the traditional Indian dresses, which she later came to wear offscreen as well. “Mindy has gone with me a couple times to the store and she’s bought her own, ’cause she wears them as gowns now,” he notes proudly.

On the second floor, Kaling’s costumes are interspersed occasionally with those of her co-stars. A two-piece wedding dress and beaded veil worn by Xosha Roquemore (Tamra Webb) stands out, as does a pink suit worn by castmember Fortune Feimster. Perez says he custom-made the garment for the actress after she quashed the idea of her character Colette wearing a gown during a season-three marriage proposal.

Still, the inclusion of these non-Mindy garments feels almost like an afterthought, as the styles worn by the show’s title character (who works as an OB/GYN) are inevitably what draw the eye. It’s no surprise, then, that Perez’s costumes for his star have garnered a following all their own. The designer gives much of the credit to Kaling herself, whom he notes is a “voracious” reader of fashion magazines offscreen. 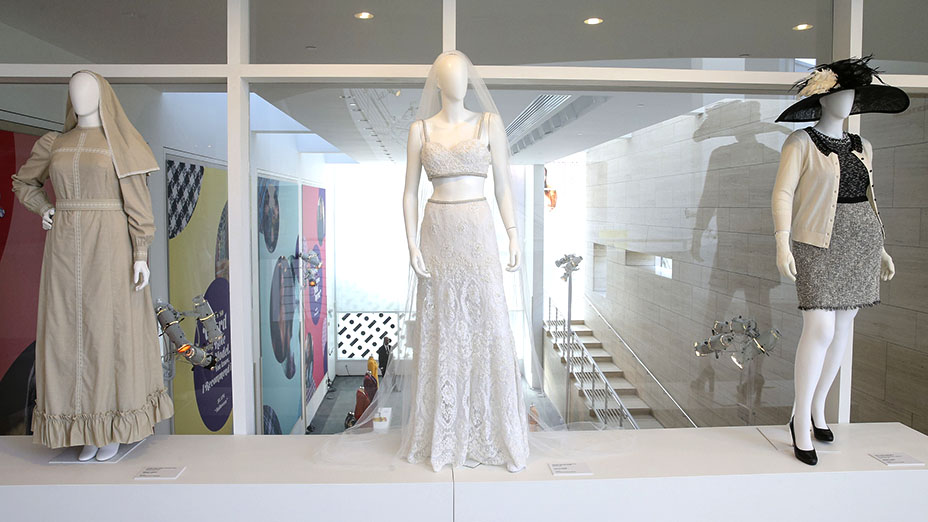 “She really pushes fashion,” he says. “We’ve sort of taken all those norms, like what a doctor would wear to the office, and, you know, what doctor has this collection of hand bags? Come on! She’s made fashion fun and wearable and another character on the show.”

One touch to the exhibition speaks undeniably to the fame enjoyed by the costumes themselves. In the main room on the second floor, visitors have the opportunity to take a selfie against a large, colorful mural of Mindy’s closet, which looks like the window display of a particularly well-stocked candy store. “That was my idea,” beams Perez, who didn’t rule out a retail line of Mindy-inspired fashions at some point in the future.

Given how inextricably linked Perez’s styles have become with the character of Mindy Lahiri, it’s hard to believe the collaboration almost didn’t happen. After falling in love with Perez’s designs for the 2012 rom-com Think Like a Man, Kaling pursued him relentlessly, and he turned down the job, by his account, “several times.” But after finally meeting with Kaling, his fears of designing several seasons’ worth of lab coats (the show is partially set at Lahiri’s OB/GYN office) were allayed. 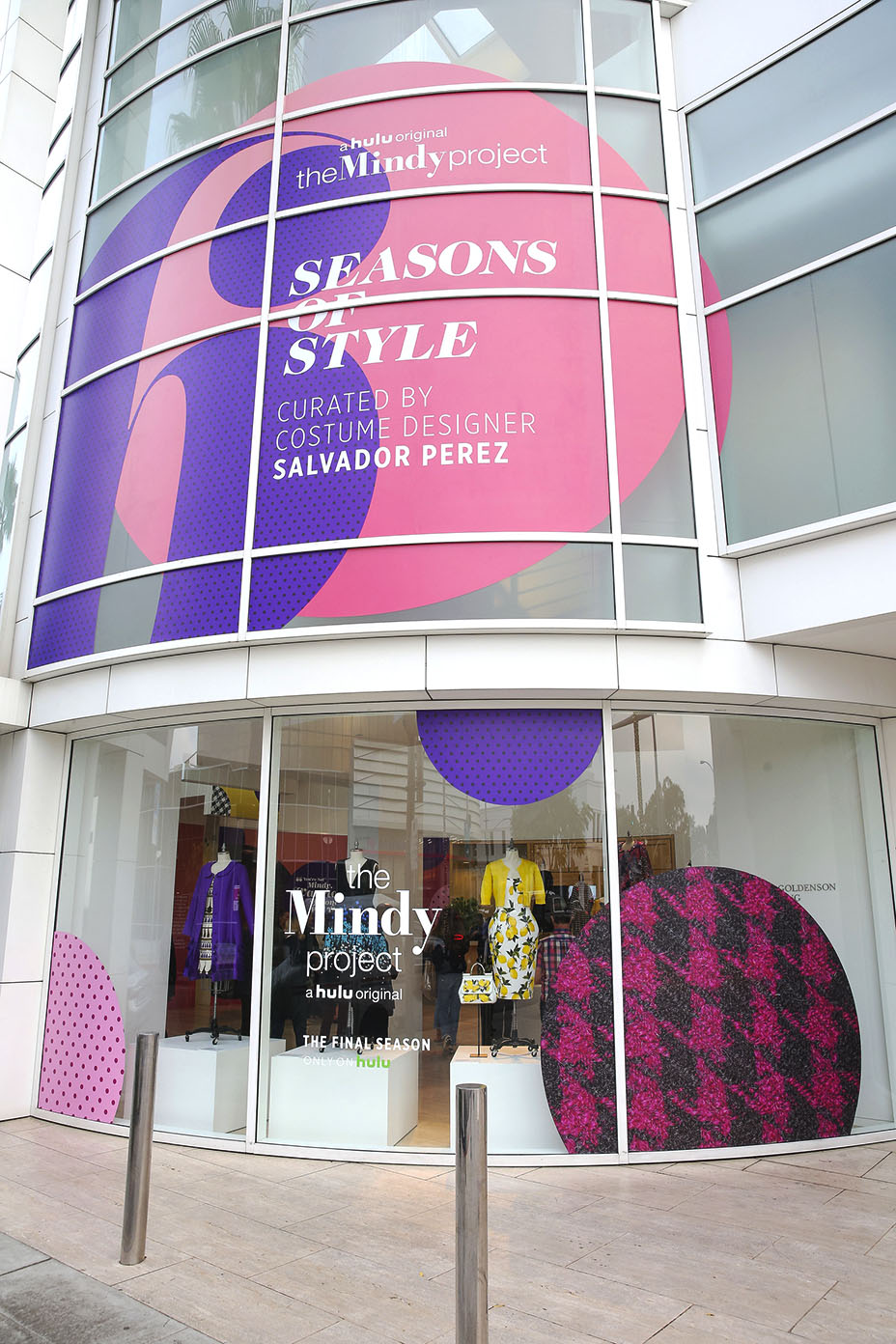 “Mindy was, like, ‘Oh, no, no … I want it to be aspirational. I love fashion, I want to push the edge,’” says Perez, who is slated to begin work in December on Kaling’s forthcoming NBC comedy Champions. He adds later, “I cannot imagine not having done the show now.”

So now that The Mindy Project is close to wrapping production on its sixth and final season, what happens to all those clothes? According to Perez, a “large selection will go to the archives,” some will be auctioned off, others will end up at the NBC Universal Asset Center (“You’ll see that coat on an extra on some other TV show, which breaks my heart,” he says) and at least a few will end up with Kaling herself.

“She just built a big house with a big closet and it’s only half full,” says Perez. “So I’m like, ‘Mmmm.’ She’s planning ahead.”